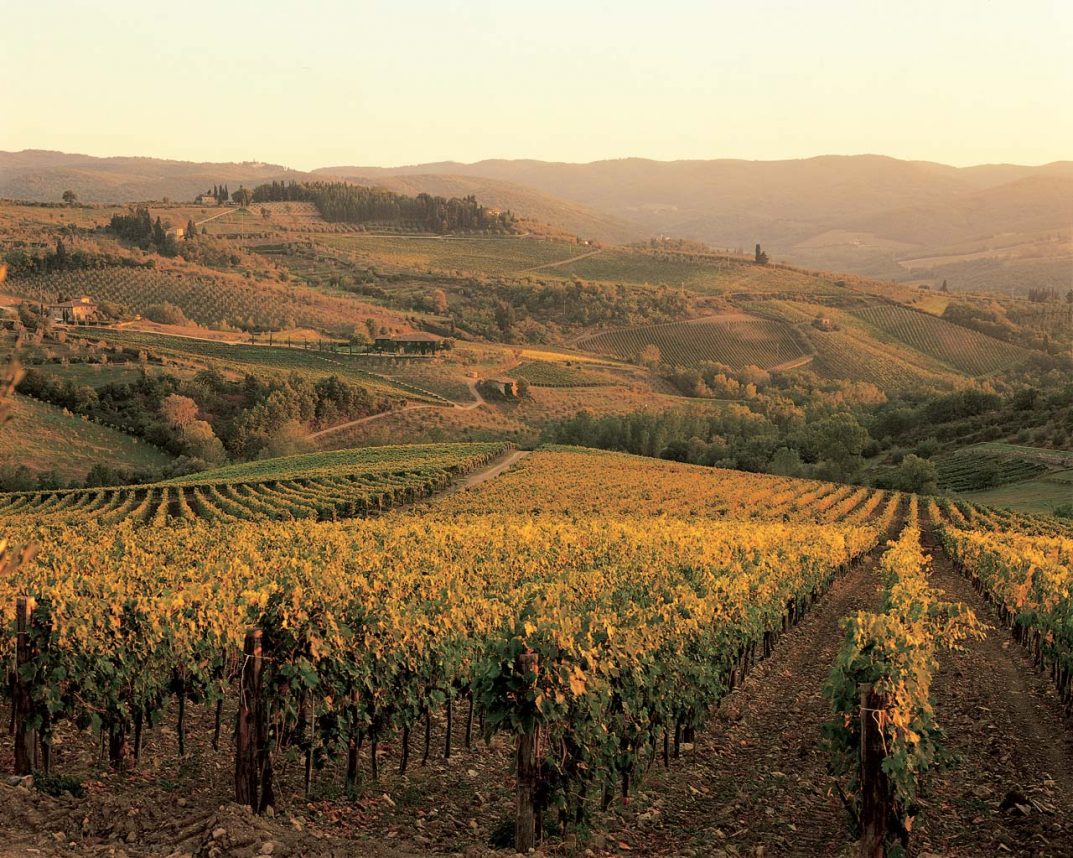 This is an overview article about the wines of Tuscany because many regard it (with some justification) as quintessential Italy. Really, this is a topic needing an entire book or maybe two. However, here it is in less than 1,300 words. Two included maps show just how complex Tuscany is. For brevity, the links out in the text are to Tuscan wines reviewed elsewhere on this website.

Winemaking in Tuscany dates back to Etruscan times. In the modern era, Tuscany was the region where Italy’s wine renaissance began. Huge investments mean it remains a powerhouse of wine excellence, prestige and innovation. There are 11 DOCGs, 41 DOCs and six IGPs! These reflect considerable variations in terroir, winegrowing and laws. It means that Tuscany is a complex patchwork where famous areas collide with the new, the emerging or the simply obscure. There are so many that in this article, the DOCGs take priority. It’s also convenient to split Tuscany into two; namely the historic centre and the newer perimeter. 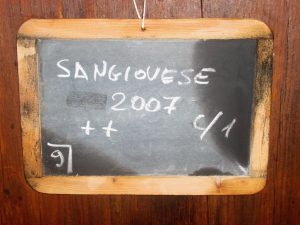 85% of the wines in Tuscany are red, often dominated by Sangiovese, which is the most widely planted grape variety. In Tuscany, it’s capable of many different expressions. Sangiovese often partners with other international and indigenous grape varieties too. 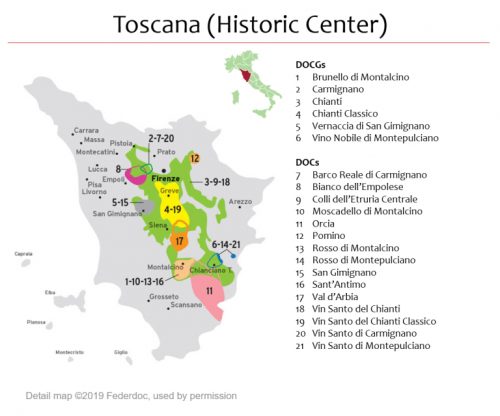 Where else to begin than with Chianti Classico DOCG. Here’s the landscape painted by Giotto and da Vinci, stretching along the road between Florence and Siena known as La Chiantigiana. Views are panoramic, with waves of hills topped by oak forest, castles and villages. All around are olive groves and vineyards, dotted with cypress, poplar and pine trees. The DOCG is ably represented by their famous Black Rooster Consorzio. Since 2014 there is a controversial new top category: Gran Selezione.

Chianti DOCG is the area outside the Classico heartland, and itself comprises six different subzones; namely Colli Aretini, Colli Fiorentini, Colline Pisane, Colli Senesi, Montalbano, Montespertoli and Rufina. These may be more variable in quality, but they do have stellar performers. The best of these subzones is arguably the cooler Chianti Rufina DOCG to the northeast of Florence.

Sticking with classic Sangiovese-based reds, there are two more iconic areas to the south of Chianti Classico based on their hilltop towns. Brunello di Montalcino DOCG has had entire books written about it, where Sangiovese is known as Brunello. Some consider it to be the apogee of Sangiovese.

Nearby is the equally famous Vino Nobile DOCG is from Montepulciano, where Sangiovese is known as Prugnolo Gentile. Carmignano DOCG is an alternative source; of Sangiovese and the Cabernet Sauvignon that has been grown there for more than 250 years. The international varieties play an important role in modern Tuscany, but Carmignano proves that their presence is hardly new.

The Supertuscans are a relatively recent innovation. These red Toscana IGPs had no intention of fitting in with the DOC/DOCG rules. The freedom of the IGP wine laws allows experimentation with varieties such as Cabernet Sauvignon, Cabernet Franc, Petit Verdot, Merlot and Syrah. Many of these wines are of stellar quality, some have become cult wines, like Sassicaia, Ornellaia, Solaia, Luce della Vite, Masseto and Tignanello. These days, Supertuscans are from all parts of Tuscany, and some now qualify for the current DOC/DOCG laws. Usually, these are flagship wines and priced accordingly. 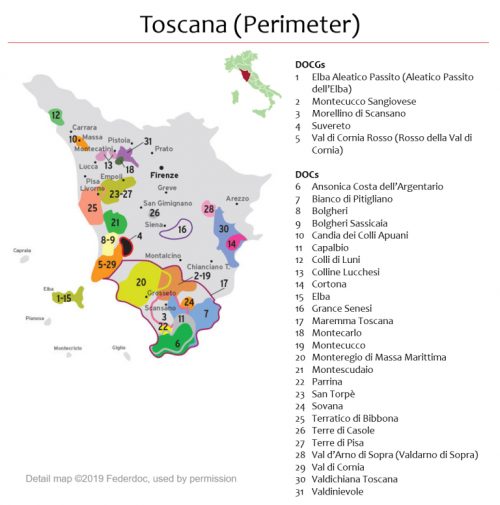 The engine of Tuscany’s modern wine revolution was in Chianti. However, it quickly spread, including to the coast. This area was once a once pestilential marsh without any great winemaking tradition. The cheaper land here became ripe for expansion. This area is now buzzing with ideas, ambition – and some of the most famous Supertuscans of all.

This new world is exemplified by Bolgheri DOC and the northern Maremma where new acclaimed vineyards are planted just inland, on the hills rising from the coast. Here, French grape varieties such as Cabernet Franc, Cabernet Sauvignon and Merlot thrive in the warmer maritime climate. Hence these wines take their principle inspiration from Bordeaux. When Sangiovese appears it’s most often in a supporting role.

It all started with Sassicaia in the late 1960s. It’s now one of Italy’s most exceptional wines with its own DOC, created from Cabernet Sauvignon and Cabernet Franc. Similarly, others followed suit, making precision wines where the luxurious French content meets effortless Italian designer style. Now there are more than fifty wineries in Bolgheri alone.

Nearby areas such as Suvereto DOCG, Val di Cornia Rosso DOCG and Terratico di Bibbona DOC are seeking to emulate Bolgheri’s success. There are excellent wines and producers at lower price points.

Meanwhile, the southern Maremma has been rediscovered as prices of famous wines continue to skyrocket. Morellino di Scansano DOCG is where Sangiovese (here known as Morellino) produces a softer and more savoury style due to a warmer and drier climate with proximity to the sea. It’s an area of excellent quality and good value. Much the same applies to the more inland Montecucco Sangiovese DOCG.

White wines might be in the minority in Tuscany, but the best examples are worth seeking out. Vernaccia di San Gimignano DOCG is the classic Tuscan white wine. It grows on the rolling green hills surrounding the hilltop town of San Gimignano, a medieval Manhattan thanks to its high-rise towers.

Meanwhile, the fresh and mineral Vermentino grows along the coast in many places. Other white varieties such as Chardonnay, Pinot Bianco, Malvasia, Viognier or Sauvignon Blanc are often blending partners.

Chardonnay isn’t commonplace in Tuscany, and the best examples generally come from the tiny enclave of Pomino DOC, which overlaps with Chianti Rufina. Sadly, the ubiquitous Trebbiano Toscana only shines unless when used for Vin Santo.

Pick of the other DOCs

In addition to the DOCs already mentioned, those near Pisa and Lucca, in particular, are well worth exploring. In Northern Tuscany, Lucca is a jewel at the base of jagged mountains.  A tiny enclave on the north side of the town is called the Colline Lucchesi DOC. This has many different red and white grape varieties, which means that almost anything goes. However, Syrah seems particularly suited. Meanwhile, the tiny Terre di Pisa DOC is one of the newest appellations with a Consorzio founded in only 2018, yet can boast winemaking families established in medieval times.

The wine diversity of Tuscany can be overwhelming, yet there is much to discover beyond the famous names. Indeed this means that there are Tuscan wines for every price point though obtaining great value might need a little research. Finally, at the risk of stating the obvious, there is so much more to Tuscany than wine alone. It’s a cradle of art and literature, history and gastronomy. All the while, the stunning countryside and the medieval cities of Florence, Siena, Pisa and Lucca make Tuscany a place of near-infinite discovery.

Do take a look.