What is Albarossa? Good question. It’s a relatively unknown Italian red grape variety, primarily grown in Piemonte, Northern Italy. Piemonte is famous for Nebbiolo (think Barolo and Barbaresco) and Barbera. And that’s a clue to this high-quality grape variety with an interesting backstory. While many Italian examples have ancient origins, from mutations and natural selection, Albarossa doesn’t. Instead, it’s a modern creation from plant breeding.

Of course, plant breeding by humans is hardly new; the selection of the “best” goes right back to the start of human agriculture. In modern times, science has interbred related plant varieties as crossings to select desirable and stable traits over several generations, such as productivity, taste, colour or resistance to disease. That’s a recombination of genetic material that could happen in nature*.

Back then to Albarossa. In 1938, Dr Giovanni Dalmasso was looking at crossing Nebbiolo with Barbera. The idea was to create a new variety that would possess the quality of Nebbiolo but with the ease of growing and productivity of Barbera.** If it had only been about taste, such a crossing would have been pointless – there are plenty of Nebbiolo/Barbera wine blends in the Langhe!

Unfortunately, in the days before advanced DNA testing, distinguishing between vine varieties was based on visuals, in other words, ampelography. So it turned out that the Nebbiolo wasn’t. Instead, it was the unrelated (but visually similar) Nebbiolo di Dronero***. That variety now goes by the name of Chatus to reduce confusion!

However, this story has a happy and successful ending. After controlled trials and tests, the crossing, known initially as Incrocio Dalmasso 13.26, was christened Albarossa, only authorised for planting in 2001. Yet it achieved DOC status quickly, in 2010. Some eighty hectares are now grown, 80% of which is in Piemonte, mostly around Monferrato. The other 20% is mainly next door in Lombardy. Moreover, several producers have adopted Albarossa, including the likes of Banfi, Prunotto and Michele Chiarlo.

Given that it’s achieved all this in 20 years, I’d say that’s a pretty successful outcome – persuading producers to plant something unknown compared to the famous and economically viable Barbera and Nebbiolo is going to take time, especially given the time need for vine maturity or replanting.

And so, Albarossa is a quality grape capable of making excellent and memorable red wine. Bricco dei Guazi has the best example I’ve encountered; a small high-quality winery based within the UNESCO World Heritage site near Casale Monferrato. 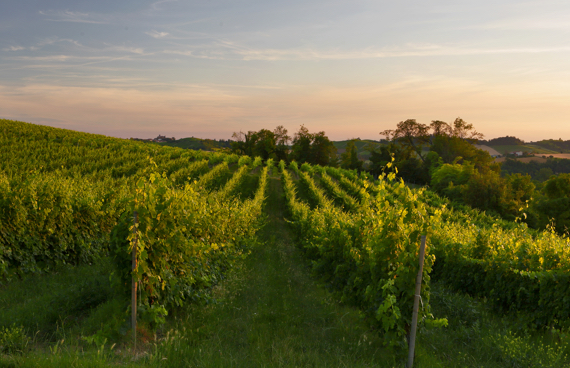 Wine production at Bricco dei Guazzi dates back to at least 1400, with cellars built in the fifteenth century, modernised in the seventeenth century and again recently. Unfortunately, it’s is an area of low rainfall. However, there are ancient vaulted cisterns at the winery to collect rainwater, so you could say that this winery has been sustainable for centuries! It occupies a hilltop position (hence the name Bricco) at 260 metres and has 40 hectares of vineyards. As well as the expected reds, Barbera and Merlot, there’s also Cortese (for Gavi di Gavi) and Chardonnay in white. Five hectares of Albarossa is on the southern slopes, where the white calcareous soils reflect sunlight up into the vines.

Meanwhile, wine consultancy is from the legendary Riccardo Cotarella, so ensuring winemaking excellence.

The Albarossa grapes are destemmed and fermented in stainless steel. For the first six months, maturity is in French oak barriques, followed by another twelve months in large 3,000-litre barrels. After bottling, there is a minimum of four months rest before release.

The Genagricola agricultural group owns Bricco dei Guazzi, which is Italy’s largest agribusiness. It specialises in viticulture, arable and livestock farming and it’s also is a significant player in renewable energy sources.

If you are looking for the hallmarks of Nebbiolo, such as a pale colour with an orange hue in the glass, or scents of tar and roses, or angular tannins, you will be disappointed. Fortunately, Albarossa has a distinct personality, a winter-warmer turned up to the max. So forget Nebbiolo and approach with an open mind.

In colour, it’s a deep and opaque ruby red with some deep purple glints, leggy with alcohol (but probably also glycerol). Maybe the 15.5% abv stated on the label is potentially problematic on the first encounter and is far more than my usual preference.  However, while undeniably full-bodied and powerful, the balance of fruit and acidity masks the alcohol, and there’s no heat in the mouth either – so take it slow and treat it perhaps as you would an Amarone. There are fragrancies of blueberry, coffee and a little leather. Then strawberry, cherry and tobacco as it opened up in the glass. Unexpectedly, tannins are creamy soft and elegant. A long, satisfying farewell brings some welcome spice and smoke. Drinking well now and with a long life ahead, though how it will age is something I look forward to finding out!

Meanwhile, since discovering Albarossa, I’ve tracked down over a dozen other producers. While I haven’t tried them all (yet), this example from Bricco dei Guazzi is a superb example and is highly recommended.

It’s fair to say that the UK weather this winter has been unrelentingly miserable. Best then to hunker down, perhaps in front of a fire, and eat copious amounts of warming and comforting food. It’s at times like this that Albarossa comes into its own. Hearty, thick stews, with meat or without, are the order of the day and a perfect partner. Don’t forget the crusty bread. If you prefer something less rustic, then add some black truffle shavings.

*This idea, of course, now extends into the genetic engineering of plants and GMO crops – and for the avoidance of doubt, I oppose GMOs because such organisms have combinations of genes that cannot occur in nature or from traditional crossbreeding. GMO’s often have genes introduced from entirely different species.

** A common enough objective in vine breeding. Take, for example, Pinotage. A modern crossing, the idea was to combine the quality of Pinot Noir with the productivity of Cinsault. Detractors will tell you that unfortunately, Pinotage has the exact opposite characteristics.