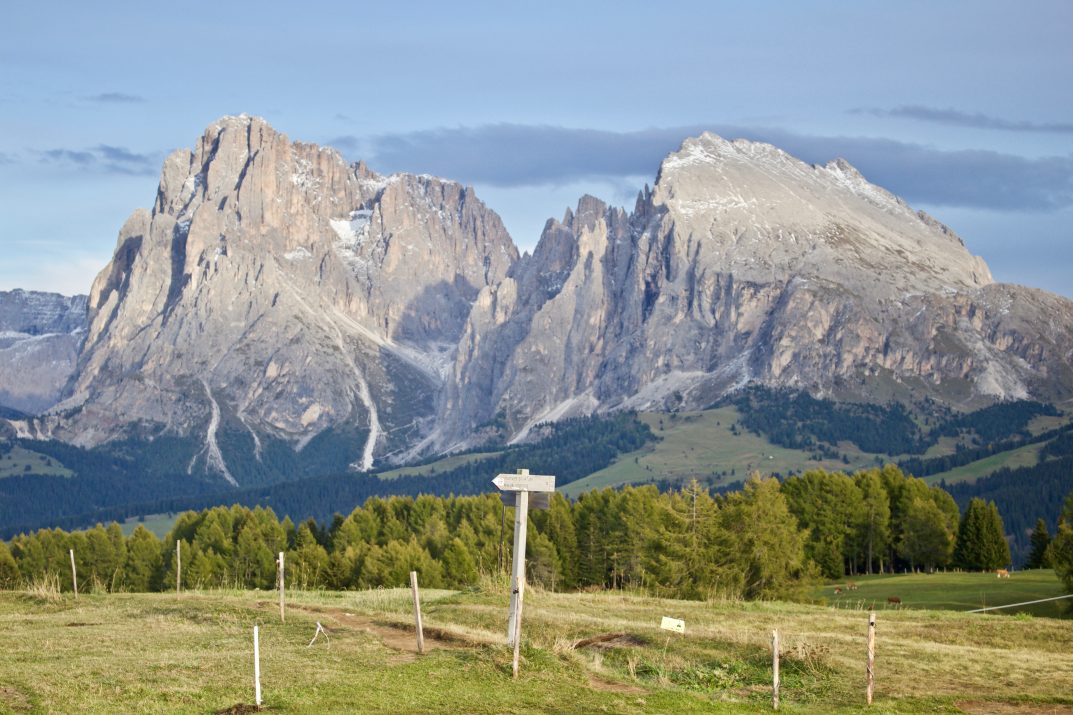 The Alto Adige Wine Summit – Live At The Witch Trials

I recently attended the first Alto Adige Wine Summit, based in Bolzano, in Italy’s mountainous far north. Part of the activities included the most memorable wine event I’ve ever been to, the Wine in the Mountains tasting. It was in the Dolomites that tower over Bolzano, at over 2,000 metres. Outdoors, in the pure air; its stage the biggest mountain meadow in the Alps. Welcome to the Alpe di Siusi, known in German as the Seiser Alm. A wine tasting at 6,725 feet? Sounds Bonkers; I wasn’t going to miss that. So here I was, Live at the Witch Trials.

Pop Quiz: what’s the hottest Italian City in Summer? Forget Palermo, Catania, Napoli or even Rome. It’s Bolzano, the capital of the Alto Adige, or Südtirol. The mercury will easily hit 40°C or more in July and August. It’s because Bolzano is low lying, sheltering under clear skies in the ravine of the river Adige. In contrast, December brings thick snow. Meanwhile, the valley floor appears to be one big apple orchard. Indeed, this region has 2% of the worlds total apple production. Strangely, olive trees happily co-exist with palms and alpine flora.

I’d better explain. The Dolomites and the Alpe di Siusi are a magnet for winter skiers, while world-superstar climber Reinhold Messner is from these parts (and owns the superb Castel Juval Untertortl winery). Summer brings the hikers, entranced by spectacular scenery on all sides and the ever-changing light. Jagged peaks such as Sasso Longo rise to nearly 10,500 feet. I witnessed these change from blue to steely grey, then pink. The silence of this glorious space is punctuated only by the tinkling bells of Grauvieh cows. It’s rightly a world heritage site.

Here, in the shadow of Sciliar mountain, people came for alpine herb treatments from wise women. As usual, their cures were witchcraft and the practitioner’s Witches. Charges against one particular Witch included the ability to turn into a squirrel.

It seems appropriate that at the Wine Summit activities, the wineries were practising modern-day witchcraft. In a sense, their spell-binding wines were on trial.

There are two main ways to ascend to the Alpe di Siusi: by winding hairpin road and cable car up from Siusi allo Sciliar. While I’ve vowed to return and let loose in a sports car, the cable car is spectacular and probably quicker. Near the top at Compatsch, the only vehicles are horse-drawn waggons. 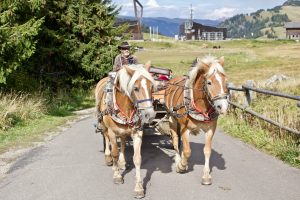 Trentino-Alto Adige is an autonomous region of Italy, yet the cultural heritage is decidedly Germanic, especially in Alto Adige. The locals speak both German and Italian, with Ladin a minority language. South Tyrol was a part of the Austrian Empire, and many inhabitants trace their ethnicity to Bavaria.

In 1915, Britain, France and Russia promised Italy this territory in return for joining them in WWI. Emerging as victors, it became Italian in 1919. The dominant German culture came under pressure from heavy-handed Italianisation. That created conflict. After WWII, the UN negotiated a new treaty between Austria and Italy. The region became an autonomous province guaranteeing the rights of German speakers. Today, those tensions are a thing of the past. As an aside, such historical diplomacy is a potential role model for harmony in other places. How topical!

A plethora of local and international grape varieties

The Alto Adige grows 20+ grape varieties and, unusually, 99% of its vineyards are DOC. There are also seven DOC subregions reflecting different microclimates. This region is best known for its dry white wines that thrive at higher altitudes. However, there is much more to discover. The principal red grapes are Schiava (Vernatch/Trollinger), Lagrein and Pinot Nero (Blauburgunder). There’s also Merlot, Cabernet Sauvignon/Franc and Moscato Rosa (Rosenmuskateller).

Rare varieties like Fraueler, Furner, Blatterle and Versoaln also exist, though sadly, I’ve not yet met them, at least consciously. Regardless, that’s some vinous palette with which to play!

Vineyards of rock and sky

All the vines are planted on limestone, volcanic and glacial soils. All are on hills and steep mountainsides, rising to an incredible 1,000 metres (3,280 feet).  Steep slopes mean a mosaic of small individual plots is the norm. 5,000 winegrowers tend just 5,300 hectares. Consequently, co-operatives (cantine) are big players, with fifteen making two-thirds of the production. I’ve never seen such a collection of fantastic coops in one place. Their wines are equal to those from private producers. 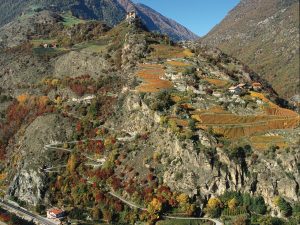 Time to return to the Witch Trials 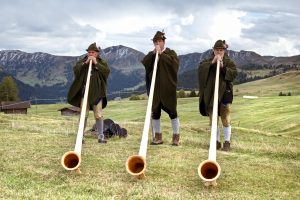 The Alphornblater Seier Alm at the Witch Trials.

Tasting wine at over 2,000 metres is different. It’s an old Witch tale that alcohol has more impact on the senses at altitude. However, atmospheric pressure is 20% less than at sea level. I was below the level where altitude sickness might kick in. However, there is no doubt in my mind that that altitude does affect the senses. For example, tannins in red wines seem accentuated, whites tend to be less aromatic, and sweet wines seem drier. Wine seems to take longer to open up in the glass, but sparkling wines appear to flatten more quickly. And I also thought that the sheer beauty of the surroundings adds to a good mood and kinder evaluation! All factors to take into account!

During the Wine Summit, I tasted hundreds of wines from many Alto Adige producers in different venues. They included varietal and blended whites and reds, rosé, sweet and sparkling examples. I’ve selected my top ten wines by choosing a favourite from each grape variety or blend to ensure diversity. I’ve also checked that they are all available to buy in the UK. Hence I apologise for leaving out some examples that are not currently available or would be varietal duplicates.

Elena Walch, “Beyond The Clouds” 2015. 85% Chardonnay, though there is always a little extra from 15% undisclosed grapes (probably Sauvignon, Gewürztraminer and Pinot Bianco). £49.95 at Uncorked. Dazzling. Smoky, flinty, savoury, with herbs and jasmine. Expensive? Yes, but it competes with the worlds best Chardonnays.

Cantina Tramin. 2016. Gewurztraminer from perhaps the original cradle of the Traminer Aromatico. £13.55 from the Drinks Shop. Alto Adige Gewurztraminer is distinctive, and this is a thoroughly dry wine and doesn’t lack acidity. Neither is it oily, alcoholic and overblown, so it’s easy to drink without tiring. Beautifully aromatic, with roses, exotic spices and lychee.

Tiefenbrunner, Feldmarschall von Fenner zu Fennberg. 2014. £25.00 at Hic! Possibly the most distinctive wine in the Alto Adige, probably the best Müller-Thurgau in the world. Grown at 1,000 metres. If you thought Müller-Thurgau was a poor quality grape, then think again! A must-try wine. Flint, apricots, white pepper. Very young yet, will improve for years. Spell-binding.

Cantina Nals Margried, Punggl 2015. £19.99 at Mr & Mrs Fine Wine. Pinot Grigio as it should be from this terrific coop! Leesy flavours, pears and almonds. Real character and length.

Cantina Terlano (Kellerai Terlan), Vorberg Riserva 2014. £28.99 at AGWines. This is Weissburgunder at its most beautiful and capable of considerable ageing over decades, so drink now or keep for years. An elegant, subtle and insinuating wine, with a super-creamy rich mouthfeel. Apple, pear and white flowers. Pastry notes and ginger biscuits. 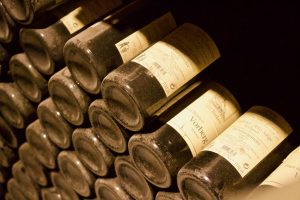 Cantina Tramin. Lago di Caldaro DOC 2016. £13.26 at Tannico. Schiava (Vernatsch) is the most common grape in these parts. With a reputation for being a light quaffer, it’s in decline. However, there are some terrific examples. Mid-ruby colour, light alcohol and soft mouthfeel, but fresh acidity, cranberry fruit and a spicy finish.

Castel Juval Unterortl, Val Venosta DOC 2014. £27.95 at Connolly’s. Scented, alpine-style Blauburgunder at its very best. Wild cherry, blackcurrant and blackberries compete for your attention. Elegant, autumnal and will age beautifully. The myth about Italy not doing Pinot Noir well is over. 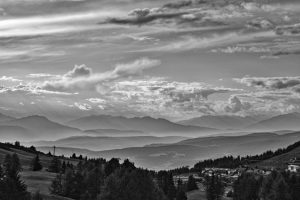 Here’s a short video made about the Wine Summit. I’m in it somewhere!

And finally, I met a Witch after the Wine in the Mountains tasting. But perhaps that’s a story for another time.

Like this article? Try another about the Alto Adige here.

Or find out more about the Autochtona competition in Bolzano here.