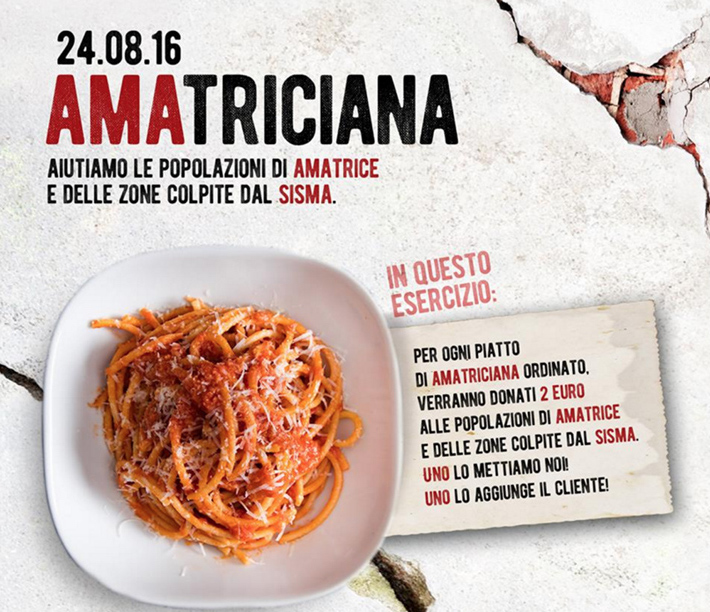 By now, many of us will have seen the devastation caused by the earthquake in Central Italy this week. The epicentre was close to the town of Amatrice. It’s famous for the Amatriciana pasta sauce central to Roman cuisine.

To add insult to injury, Amatrice was preparing for its 50th annual festival celebrating their traditional dish this weekend. Bizarrely, virtually the only structure left standing afterwards was the clock tower, a First World War memorial. At 3.36 am the clock stopped. It marks the time the 6.2 magnitude quake hit. It killed 300 people.

You can help just by eating

Granted that there are enough distressing scenes and reports out there without my adding to that. Instead, I’m suggesting that we can help by eating Amatriciana.

Moreover, Amatriciana is an Italian classic. As usual, there is a long and sometimes disputed history. Most agree it originated as simple peasant fare in Amatrice before becoming popular in Rome.

As with many great recipes, it’s simple yet utterly delicious. There are only four ingredients. You only need cured pork, tomatoes, cheese, and peppers. Romans posh it up with onions, garlic, basil and a splash of wine.

Now for the pasta. Spaghetti is typical, Rigatoni works, Bucatini is best. Bucatini is a larger diameter spaghetti that soaks up the Amatriciana sauce.

Given the simplicity of the ingredients, it’s a doddle to make and incredibly cheap. I reckon you could make enough Amatriciana for four people for a couple of pounds, maybe less.

What I’d like us to do is make the dish at home. Donate the money you saved to the British Red Cross, who have set up an appeal fund for Amatrice. You can do that here. They’ve made giving almost as easy as making Amatriciana!

As for the recipe, there are many online, but this one is excellent. Try to find the cured pork cheek traditionally used, called Guanciale. If not, substitute pancetta or unsmoked streaky bacon. Pecorino Romano is the cheese you need. That’s easy to find, but parmesan will do.

Easy? Even clumsy me can do it! I’ll be serving it up with an Italian red wine to wash it down! Colli della Sebina Rosso is authentic, but any inexpensive Sangiovese or Montepulciano is just dandy. if you want to push the boat out then a Montefalco Sagrantino DOCG will hit the spot.

Now, if you don’t want to make Amatriciana, then find a decent local Italian restaurant and order it there! It is such a favourite that it is usually on the menu. Henceforth, Slow Food is campaigning to get Italian Restaurants to donate €2 to the Red Cross for every dish served. That initiative has had a terrific response, and there are already 700 participating restaurants. This idea is now spreading beyond Italy. Ask your local Italian restaurant to participate. Spread the word!

Eating Amatriciana is a fun way of making a difference and showing support. I hope you agree.