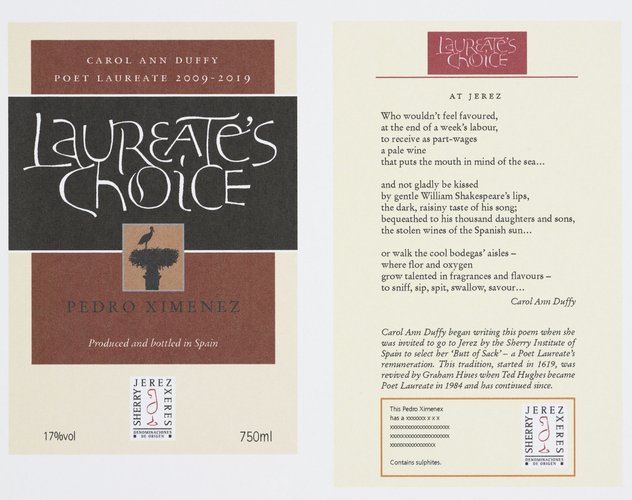 Dame Carol Ann Duffy is a Scottish poet and playwright. She became the 20th official Poet Laureate in May 2009 until her ten-year fixed-term ended in May 2019. During this time she excelled as a great ambassador for poetry and wrote the poem called At Jerez.

As is traditional, part-payment for the post is “a butt of sack”, what we now call Sherry.  This gesture started with James I in 1619 when he awarded a pension to Ben Jonson. However, the first official Poet Laureate was when Charles II appointed John Dryden in 1668. The sherry award continued until lapsing in 1790. However, in 1984 Ted Hughes’ appointment led to it starting again. It then continued with the next Laureate, Andrew Motion. Both chose Oloroso. As a Sherry Butt holds 720 bottles, these are usually supplied over the 10-year tenure, labelled as “Laureate’s Choice”. The first Duffy bottles were Manzanilla and Fino from Lustau, with a different sherry style chosen each year. Her label design was by artist Stephen Raw, and the poem appears on the back label.

Who wouldn’t feel favoured,
at the end of a week’s labour,
to receive as part-wages
a pale wine
that puts the mouth in mind of the sea…

and not gladly be kissed
by gentle William Shakespeare’s lips,
the dark, raisiny taste of his song;
bequeathed to his thousand daughters and sons,
the stolen wines of the Spanish sun…

or walk the cool bodegas’ aisles –
where flor and oxygen
grow talented in fragrances and flavours –
to sniff, sip, spit, swallow, savour… 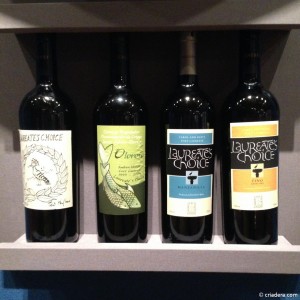 I love this timeless poem, which for me sums up the excitement of sherry.

Shakespeare references sack many times; in Henry IV Parts I &  II, The Merry Wives of Windsor, The Tempest and Twelfth Night.

I assume that the “stolen wines” refers to Francis Drake “Singeing the King of Spain’s Beard” by looting 2,900 butts from Cadiz in 1590.

By the way, Poet Laureate is Poeta Laureada de Gran Bretaña in Spanish.

This article was first published on a previous version of my website, in August 2014. Simon Armitage is now the current Poet Laureate and maintains the Sherry tradition.  A list of all the Poet Laureate’s can be viewed here.

You can also find out more about Sherry, starting here.