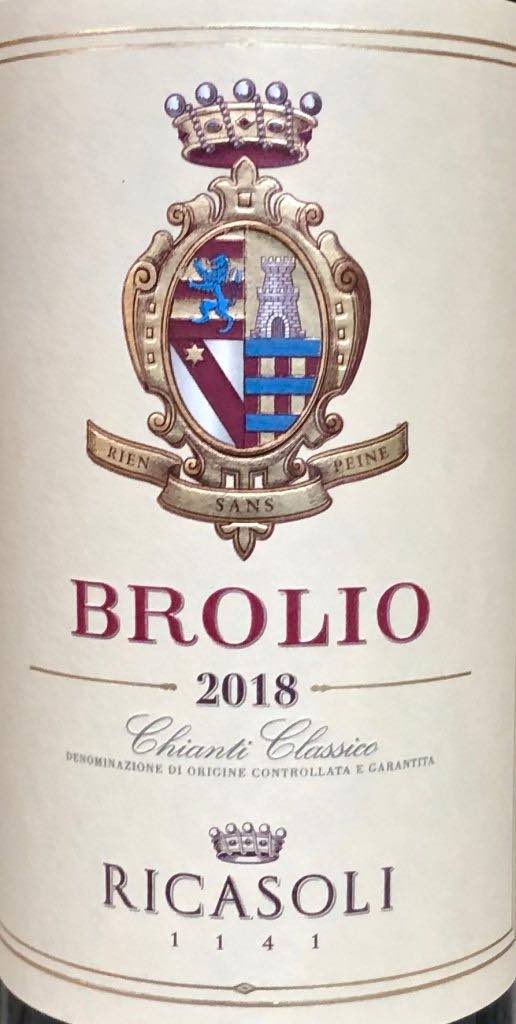 Ricasoli and the Castello di Brolio probably need little introduction to many lovers of Chianti Classico. It’s one of the most iconic properties in Tuscany. Indeed, opening a bottle from Ricasoli always brings back fond memories of visits there.

Firstly, there’s that imposing castle, the Florentine Castello di Brolio, acquired by the family in 1141. The Castello has faced many foes, battles and sieges since then. Hence it’s been rebuilt several times and bears the scars of history. This magnificent pile dominates the landscape on a hilltop near Gaiole. This estate is the largest in Chianti Classico. It includes 240 ha of vineyards and 26 ha of olives. The winery is nearby, and it makes over 2 million bottles per year.

The Ricasoli family roots stretch back a long time before acquiring the Castle. They were at the court of Charlemagne, the Holy Roman Emperor, circa 800 AD. The Ricasoli family has been winemaking since 1141, making Castello di Brolio the oldest winery in Italy.

Their wines were known to Henry VIII in England and were exported worldwide in the centuries since. After the Italian Unification, Bettino Ricasoli (the “Iron Baron”) became Prime Minister of Italy. Not once, but twice. He then wrote the first formulation for Chianti wine long before DOC/DOCG was thought of, defining it as a Sangiovese-based blend. Most examples still are.

Given the weight of history, economy and power, one might assume all has been plain sailing. But that’s not the case. For example, you might have noticed that the family motto is “Rein Sans Piene”, which means “nothing without pain”.

After World War II, Chianti, like many other wine regions in Europe, was suffering a severe decline. Desperate times resulted in drastic measures. In the sixties, the family sold the Brolio name and the winery. That enabled the castle and the vineyards to be kept in family ownership.

It must have been a bitter pill. First, the sale was to Seagram, a Canadian conglomerate, which sold it to United Wine Producers, who then sold it to Hardy’s of Australia in 1993. Wine writer Nicholas Belfrage wrote that “the Brolio/Ricasoli wine reputation sunk to shameful depths under this corporate stewardship.”

The current Barone, Francesco Ricasoli, took over in 1990. Luckily, and with difficulty, he managed to buy back the name and the winery from Hardy’s 1993. Thus the estate became unified once again.

It’s perhaps a poetic irony that Seagram, once the largest alcoholic beverage owner in the world, imploded in 2000 and no longer exists. So much for the corporate world.

Barone Francesco Ricasoli was a professional photographer, not a winegrower. However, he understood the enormous scale of the challenge, so he sought expert help. The result was vineyard zoning, where nineteen different soils matched the most suitable grape varieties. In addition, the research identified the best clones and rootstocks farmed using sustainable viticulture.

The old winery had become dilapidated, so it was modernised and extended, allowing for more than 200 individual parcels of grapes to ferment separately. Sustainability projects continue, for example identifying those Sangiovese vines with more natural resistance to fungal diseases.

The main variety grown here is Sangiovese, but there are others too. These include the locals; Colorino, Canaiolo, Trebbiano and Malvasia. The international presence comes from Cabernet Sauvignon, Merlot, Sauvignon Blanc and Chardonnay.

Castello di Brolio now boasts a range of fourteen different wines. At this point, most writers would extol the virtues of the top wines. For example, the stunning Castello di Broglio Chianti Classico Gran Selezione. Or maybe the three different Sangiovese Cru (Colledilà, Roncicone and Ceniprimo). Or perhaps the Supertuscan, Casalferro.

That’s understandable, but on this occasion, this writer prefers to praise the “entry-level” Chianti Classico, called Brolio. The 2018 vintage has just come to market.

In my opinion, the mark of a great producer isn’t just about making excellent wines at the top-tier. It’s also about making them at the “entry-level” too. Such wines are the commercial engine and standard-bearer, so they should still offer great pleasure. They can reach a wider audience, introduce the winery and be an affordable choice in a restaurant. However, if the entry-level wine isn’t excellent value, why trade up or buy again?  In other words, if you only eat the cherry on top of the cake, you miss the cake! 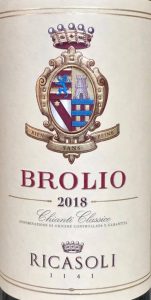 Brolio is an “annata” wine. It refers to the stipulated minimum of one year of ageing and also distinguishes it from the higher realms of Riserva, Cru and Gran Selezione.

It’s a blend of 80% Sangiovese (the minimum under the DOCG rules) with 15% Merlot and 5% Cabernet Sauvignon. The grapes come from across all the vineyards. With each plot vinified separately, the resulting blend is a selection of those most suitable for consistency of expression.

After blending, the wine then matures for nine months in French oak tonneaux of second and third use, which adds complexity. The wine doesn’t get marked by wood flavours, but it picks up some tannin and softens in the barrel. After that, it’s bottled and released in June.

Brolio is a young wine, so decanting for an hour is worthwhile. In the glass, the appearance is a pale crimson. Sangiovese doesn’t have a deep colour, and the international components haven’t added any overtly deep hues either.

The nose is surprisingly aromatic, with cherries and violets.  In the mouth, the first impression is juicy sour cherries. There’s abundant acidity and enough tannin to underpin the fruit and contribute a little astringency. The alcohol level is also at that sweet spot of 13.5%, well-balanced to the acidity, tannins and fruit weight.  There’s an excellent persistent finish that will draw you back to the glass. This wine is dangerously easy to drink, so take your time and enjoy it!

Newly released, this exuberant wine is still young but is drinking well now. It’ll be even better in another six months as those tannins soften further. There’s enough structure here to mean it will hold for several years too. All-in-all, Brolio is a true expression of a classic Chianti Classico, and 2018 is a good vintage as well.

Brolio is particularly enjoyable with charcuterie and cheeses, as the acidity in the wine cuts through the fat. In particular, a Tuscan salami from the town of Prato, called Sbriciolona, or Finocchiona is excellent. Perhaps that’s because this salami includes some Chianti wine in the recipe. However, the real affinity seems to be with the fennel flavours in the salami, which complement the wine perfectly.

Cheeses are a natural match, too, particularly those that are young and slightly soft. Fresh Pecorino Toscano DOP fits the bill admirably.

Of course, Pasta dishes with tomato-based sauces hit the spot too!

And now, if I close my eyes, I’m standing in the Castello once again. From the ramparts, I look towards Siena then seek shade from the Tuscan sun. If, like me, you can’t visit at this time, then at least Brolio offers consolation.