Sometimes readers ask why Rioja doesn’t feature more frequently on these pages – it’s the most famous and well-loved Spanish wine region, with classically styled wines that are rightly popular. Indeed, Rioja is synonymous with Spanish wine and inextricably linked with Spanish culture and cuisine. But there’s the reason right there. Like Bordeaux and Burgundy, there are millions of words and thousands of books about Rioja. So what can be added that hasn’t been already? The Rioja wine region even has a minor planet* named after it! However, this article about Bodegas Beronia does offer something new.

It’s not every day that one of the most prominent Rioja brands celebrates its 50th-anniversary and a new winery. However, neither is it common to get the chance to taste old vintages dating back to 1978 in the company of the head winemaker. And in these pandemic affected times, Beronia supplied wine samples in a superbly presented tasting kit.

This recent tasting of five vintages of Beronia was with Matías Calleja, their Head Winemaker and Technical Director. Señor Calleja has been at Beronia for 39 years, so who better than he to explain the development and changes at Beronia, which is now one of the biggest and most loved Rioja brands. And, of course, he illustrates it with his chosen wines from five crucial vintages between 2017 and 1978.

Those categories chosen are the classic reds most representative of Rioja and Beronia, namely the Reserva and Gran Reserva wines. But, of course, the Rioja region makes plenty else, including whites, rosado’s, reds, single-vineyard, single-variety, and sparkling wines. So, naturally, Beronia makes some of those styles as well. However, while necessary for commercial diversity, Rioja is arguably defined by these two categories featuring long-ageing in the barrel and the bottle.

Beronia is in Rioja Alta, founded in 1973 by “a like-minded group of friends”. The Beronia name refers to the Celtic tribe that once lived here, called the Berones. It was bought in 1982 by Gonzales Byass (of Sherry fame). Beronia accesses 900 hectares of vineyards, including some that survived phylloxera. They reach up to 700 metres altitude, with vines aged between 20 and 100 years old. Beronia owns some vineyards, while grapes also come from long-term grower contracts.

A notable innovation made at Beronia was in their use of oak barrels. Many know that Rioja often employs American oak with its looser grain, which ages the wine faster than the finer-grained French oak. Beronia was the first winery to marry these two kinds of wood into a single barrel, comprising French oak ends and American oak staves. Genius!

Typically, Rioja shows tension between cooler Atlantic and warmer Mediterranean weather systems. Though the Atlantic influence is most marked in Rioja Alta, the Mediterranean heat can dominate, creating vintage variation. The best years tend to be where these opposing forces balance over the growing year. However, climate change has brought increasing heat and more extreme weather events, in turn influencing how these Rioja wines are made.

As for sustainability, Beronia has great credentials, promoting sustainabilty throughout production, while a number of their vineyards are also certified organic. There are also ongoing experiments, such as micro-irrigation. In addition, the stunning new winery is dedicated to the Reserva and Gran Reserva wines and provides another good reason to taste them. Everything from the building design and materials to the technology used is energy efficient and minimises carbon footprint. The winery is built partly underground and uses geothermal, wind and solar power. It has water capture and is gravity fed. It’s state-of-the-art and the first in Europe certified by LEED. 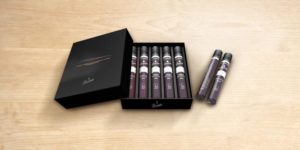 The focus is on five critical vintages, these being 2017, 2015, 2001, 1994 and 1978. Each one was rated by the Rioja DOCa as either “Muy Buena” or ‘Excelente’. We shall see that the Beronia wines exceed those regional generalisations.

The Beronia Reserva and Gran Reserva wines are always a blend of Tempranillo, Mazuelo (aka Cariñena) and Graciano. However, the use of small amounts of Mazuelo and Graciano is as a “seasoning”, just like you might add salt and pepper to your recipes. Graciano brings freshness and aromatics, while Mazuela adds tannins and colour. Therefore, both are valuable components of wines designed for long-ageing, and complement Tempranillo, though their proportions vary according to the conditions of the harvest year.

As is usual, these five wines appear here in age order, youngest first. All had 30 minutes of decanting before the tasting commenced.

2017 is the current release of the Reserva, a vintage the DOCa rated as “Muy Buena.” The grapes were selected from 40-60-year-old vines grown on chalky clay slopes at 500-600 meters. Weather was extreme and capricious. Spring frosts reduced yields before searing summer temperatures then August rains that helpfully slowed grape ripening. Maturation was for 18 months in those mixed French and American oak barrels, with a further 18 months in bottle before release. A little more Graciano has also helped ensure freshness and colour.

The first impression is how bright and clean this wine is. Plum-coloured, there are red berry, plum, liquorice and nutty aromas. The palate is full, smooth with good balance aided by fresh acidity, finally giving way to a long finish showing brown spices. The oak treatment comes through as a vanilla sweetness at this stage, which will integrate if kept longer.

If drunk now, this is a juicy lip-smacking wine but it will get better as the remaining oak slowly integrates over, say, the next few years. It offers terrific value, whether opened now or later. This wine is £14.99 in Waitrose and £16.00 at The Oxford Wine Company.

2015 is currently in a different league to 2017. Yes, it has the benefit of another couple of years in bottle, and DOCa rated the vintage as Muy Buena. However, there were differences in weather patterns between the two years. While like 2017, there was a hot summer, it was warmer and drier overall, and hence the harvest was relatively early, with the influence of global warming on this vintage marked by extra ripeness and hence more alcohol.

The wine also has more colour, concentration and complexity. There’s a little less Graciano in the blend, and there’s been more time taken to tame it, with 19 months in wood and 24 months in bottle. It has a deep blackish-purple colour, while the aromatics offer harmony and complexity, with herbs and spices and red berry fruit. There’s plenty of red fruit on the palate, now accompanied by developing balsamic notes and a liquorice lick. It offers elegance despite the higher alcohol. Those overt wood influences have gone, leaving a fresh palate that’s now velvet smooth. An even longer finish has a little cacao and no trace of alcoholic warmth. A spectacular wine that shows just how good Reserva can be.

Now for the Gran Reserva’s, which are significantly different from the Reserva’s. Not just in age and maturation time, but in grape selection – meagre yields from older vines, typically 60-90 years old, grown high up on impoverished soil and only  from the Rioja Alta. All the wines have more Graciano and Mazuelo than the Reserva, helping longevity and preserving refreshment value with their acidity. These old vintages show how wine-growing has changed. As an aside, the current release is 2012, priced in the UK at around £23.50.

This is magnificent, probably at peak but with scope to keep longer. The DOCa vintage rating was Excelente. At Beronia, Matías said that the harvest was so perfect the wine virtually made itself. This wine received 26 months in oak, primarily French (to slow down ageing), followed by 15 years in the bottle. In addition, there’s more Graciano included at the expense of Mazuelo because the weather systems balanced out perfectly. Possibly the best vintage of the last 20 years.

The wine shows clear signs of age in having a wide bricky rim and a lighter crimson core. The aromatics are more muted, take a little longer to reveal, and then are characterised by mint and balsamic notes. The palate still offers fresh red fruits and is remarkably lively, underpinned by umami savoury complexity with some leather nuances. It’s smooth and long, finishing with a dab of cocoa and brown spices. Harmonious and complete, a more classic old Rioja would be hard to find. And there’s still the ability for more ageing!

1994 was one of the most outstanding Rioja vintages, the best of a blessed decade. It was a perfect vintage weather-wise, in the days before climate change was showing overtly. The summer was mild, with enough rain in September and an early harvest for those times (though late by current conditions). The DOCa rating was Excelente. The winemaking is different, too, reflecting those conditions. There’s much more Mazuelo and Graciano and the wine is more delicate, with less alcohol. And maturation in wood is longer to tame firmer more tannic wines. This wine needed 38 months in American oak (to speed up ageing) before all those years spent mellowing in the bottle.

With plenty of acids, there’s still life and liveliness. There’s an ochre colour at age 27, which is flecked with orange. Aromas are all about nuts and polish. It now majors on balsamic flavours and a little red berry fruit before a long mineral finish. But, with life and length, it isn’t over yet. A textbook Rioja and one where fans of old wines will doubtless declare it to be “not quite ready”!

DOCa declared this venerable wine as Muy Buena, which turned out to be the best vintage of the decade. Again, weather patterns were influential the colder Atlantic systems usually dominant but meeting periods of Mediterranean heat.

This wine is a reference point for Beronia, given it was made in the first decade of Beronia’s existence and before the ownership of Gonzales Byass. It even predates Matías. Given a whopping 48 months in oak, it’s without even a hint of oxidation. The colour shows a light ochre core with a wide orange rim. The acidity is at the forefront, the reason it still lives on. Still a little tannin too. All old wine flavours now, such as leather, balsam and a walnut finish. Fully evolved, there’s a remarkable grace conveying an emotional sense of a life well-lived.

These five outstanding wines show the stylistic changes in response to ever-increasing climate change as well as how they evolve in bottle.

Today’s Rioja is different to that of yesteryear. Climate change crept in, slowly and gradually at first, but then with an increasingly overt influence, with the winemaking methods changing accordingly.

This tasting went back 43 years and afterwards encouraged a sense of reflection on the events since then that have changed us all. Sustainable Rioja wineries such as Beronia are our best chance of preserving Reserva and Gran Reserva wines for our descendants over the next 43 years!

*209083 Rioja is a small asteroid 2.1 km across discovered in 2003. It’s in the central asteroid belt between Mars and Jupiter.

During the tasting, Matías spoke Spanish with a translator; hence any errors made in the above article are entirely my own. My thanks to Beronia for providing this unique tasting opportunity.