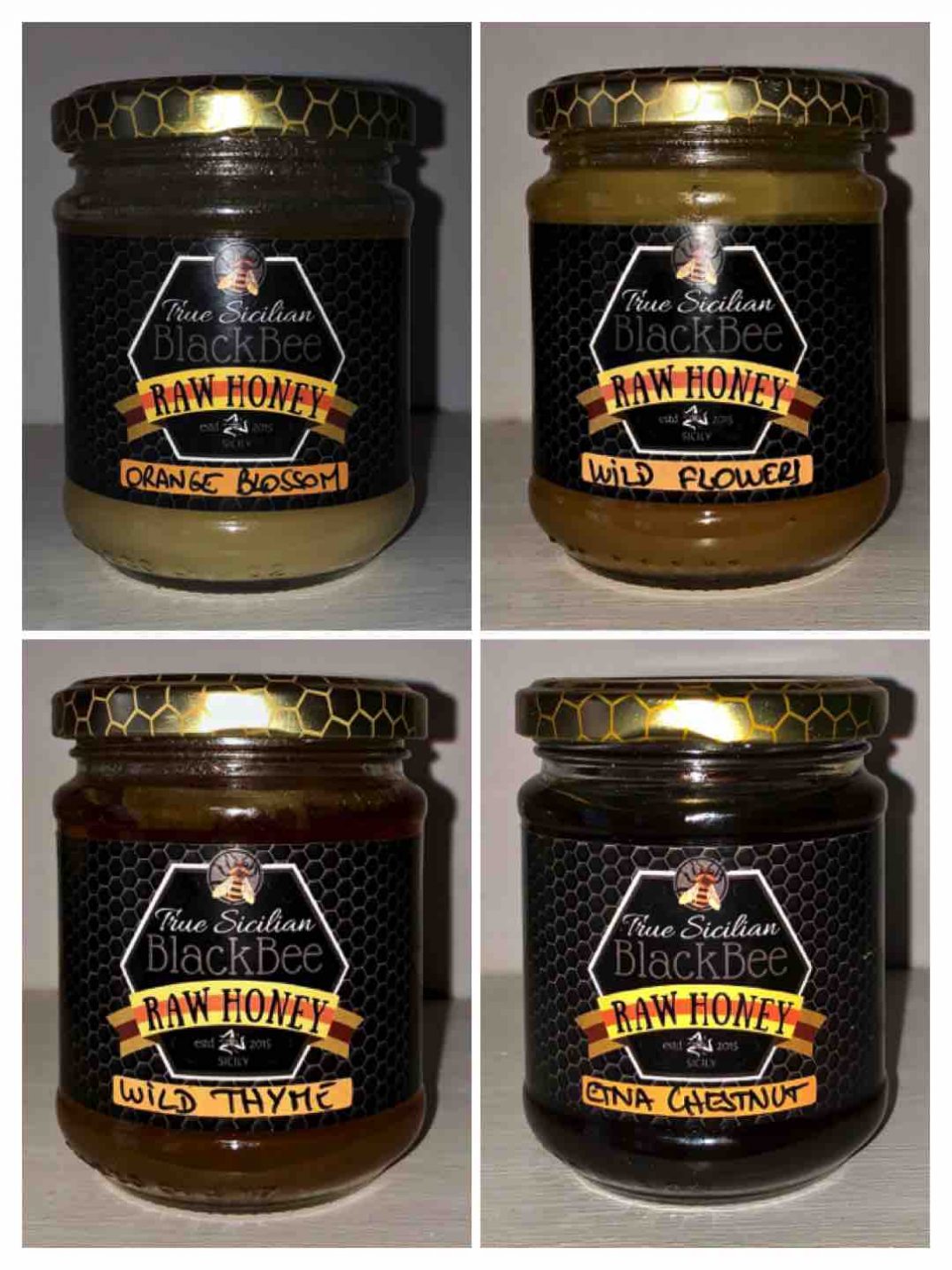 We all know that bees make honey. But not just honey; beeswax, honeycomb, propolis and royal jelly too. However, this article is about Sicilian Black Bee honey, which, like wine, comes in different flavours according to where the beehives are. And like wine, these can match different artisanal cheeses to a greater or lesser extent.

Apiculture, the keeping of bees, is one of our oldest agricultural activities. Honey is our original natural source of sweetness, antibiotics and preservation. Indeed, Spanish rock art near València depicts the collection of honey from wild bees some eight thousand years ago. The domestication of bees in the Middle East and Europe probably wasn’t long after this, while beekeeping was commonplace in Ancient China. Honey has always been in high regard; Tutankhamun’s tomb contained unopened jars of honey!

Yet, it wasn’t until the nineteenth century that scientific studies meant a greater understanding of bees and led to modern commercial beehives and husbandry. We also know that bee species play a vital role in pollination, diversity, and ecosystems. In so doing, they help ensure life for us, our future generations and our planet. However, bees are now in sharp decline and endangered because of neonicotinoid pesticides and infestations from the parasitic Varroa mite.

There are over 20,000 species of bee. Many have solitary lives, while others live together in social groups. In Europe, it’s the western honey bee (Apis mellifera) that forms the large colonies from which we obtain honey. In turn, this bee has many subspecies, which have probably partly evolved their differences because of human apiculture. One such is the Sicilian Black Bee (Apis mellifera sicula). Compared to other honey bees, these insects are smaller and darker. While they produce less honey, they are said to be docile and easy to handle. A native species of Sicily, the Black Bee risked extinction because beekeepers preferred the higher production quantity of the Northern Italian honey bee (Apis mellifera ligustica).

However, several Sicilian beekeepers have rescued the Black Bee because their honey is superior, and those bees also tolerate hot weather better. As a result, some Sicilian Beekeepers are now members of a dedicated Slow Food Praesidium*.

All bees make honey in the same way, usually between April and September. However, they make many different kinds of honey. These have considerable variations in aroma, flavour, colour and texture. Each differs according to the type of flowers visited, which depend on location and growing conditions. Like wine, honey can contain hundreds of different VOCs (volatile organic compounds) in variable quantities. These VOCs are complex chemicals derived from the flowers, the bee, and even the beehive’s storage temperature and humidity. Hence the resultant honey represents a unique sense of place and origin. In wine terms, we call this terroir.

The Sicilian Black Bee honey comes from uncontaminated ecosystems, typically in Sicilian National Parks and regional Reserves. For example, there are Black Bee beehives in the Madonie Mountains, east of Palermo; in the limestone Iblei of the south-east; and volcanic Mount Etna, in the north-east of the island.

And spare a minute for the hard-working bees. It takes the entire lifetime of a dozen worker bees to produce a single teaspoon of Black Bee honey. Furthermore, to create a 227 g jar takes about 30,000 bees travelling 27,500 miles on visits to over a million flowers.

The “True Sicilian” brand of artisanal Black Bee honey started in 2014, initially for family and friends. The honey is organic, unblended, and raw (i.e. unpasteurised). Since then, they’ve expanded sales and added other artisanal Sicilian produce such as truffles and jams to their range. This range is sold online by annual Kickstarter crowdfunding and available globally.

In a recent tasting, there were four examples of honey and a selection of artisanal cheeses. Honey and cheese is a great food combination, but it means that things get sticky, so finger bowls, napkins, and plenty of water were essential.  Now for the results, though, for brevity, only the best matches from the many possible combinations are shown. 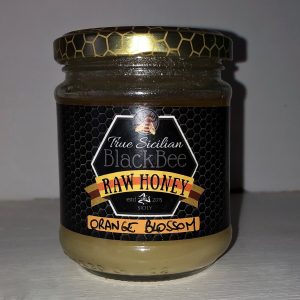 Whiteish in appearance and semi-runny. It has an incredible intensity and purity of orange perfume. There’s nothing heavy, just a delicacy of aroma and flavour.

Burrata is a terrific match. The rich, creamy mild filling oozes out of the Burrata when cut. Just drop a teaspoonful of this honey on top, and it will make a great first course.  It was also excellent with a creamy and mild Welsh goat’s cheese log. Fresh Ricotta is a good match too. Meanwhile, Spanish Manchego is well-known for an affinity with Membrillo (sweet quince paste), so use this honey’s intense orange flavours instead. 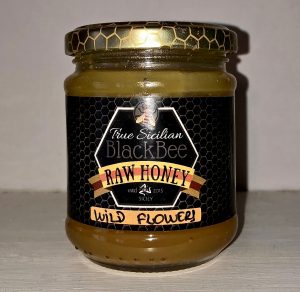 Again a lighter colour, this time yellowish-coloured honey. A marked contrast in aroma and flavour – grass and leaves, a vegetal greenness mixed into the floral notes. This honey is also much firmer, with a crystalline texture due to sugar crystals developing as it ages. This honey is less aromatic than the others but has no lack of flavour intensity. Chaorce from the Champagne area of France is an excellent pairing. This high-fat cow’s milk cheese is acidic and mushroomy, and the grassy taste of the honey was a fine companion. 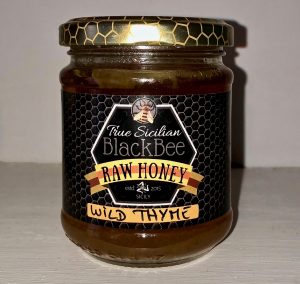 Darker honey, mid-amber coloured. This example is high in essential oils; the powerful thyme scent is like being in the Mediterranean! This honey was particularly good with an English cheese called Spenwood, an unpasteurised sheep’s cheese from the Cotswolds. The nutty and caramel fruitiness of the cheese combined with the thyme. This match was similar to an older savoury Sicilian Provola. 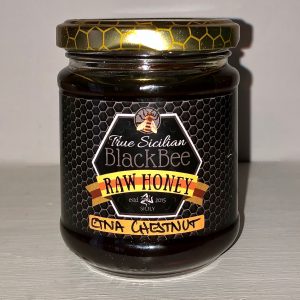 This honey is the darkest and most potent of the four, a deep brown with amber flecks. It’s also the runniest. Both the aroma and flavour have great intensity and length. Being from Chestnut, there’s a markedly savoury, malty undertow and an acidic character that cuts the sweetness and adds to the complexity, with a kind of mouthcoating créme brulée finish. This honey is the first choice for salty blue cheeses. It’s also an excellent choice for a Swiss cheese called Kaltbach Alpine, a cave-matured cheese made from Cow’s milk, firm-textured and nutty flavoured, and similar to Gruyère and Comté.

Other types of honey in the range include Prickly Pear, Lemon Blossom, Wild Thistle, Eucalyptus and Sulla Flower. Presently, these remain untried, although we are looking forward to putting those through their paces in future! Meanwhile, the next time you eat cheese, try it with honey.

Like this? In an earlier article, see how honey bees are essential to make one of the world’s most natural and guaranteed taint-free wine corks here.