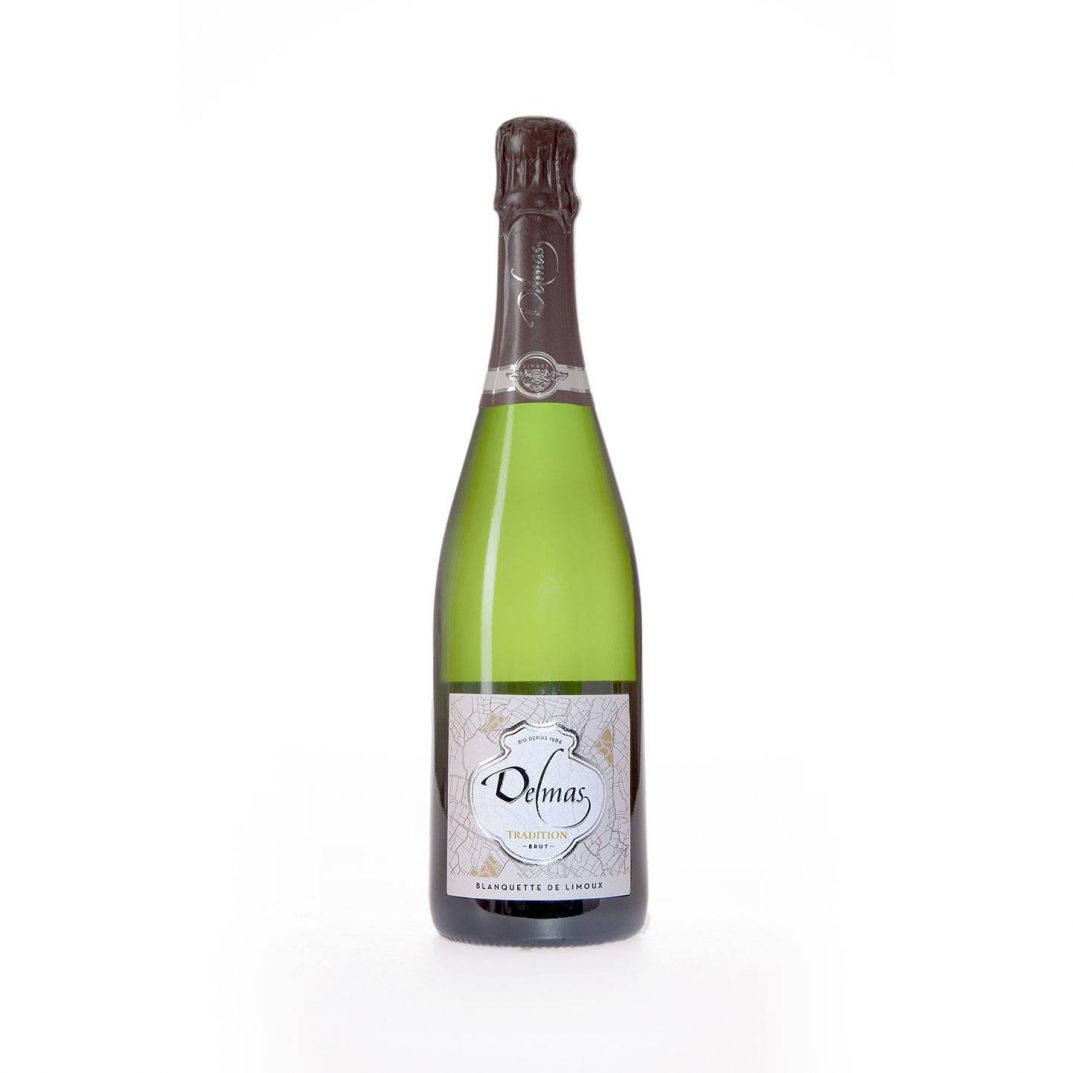 Limoux is a small French appellation in the Languedoc, in the foothills of France’s eastern Pyrenees. Given this southern location and summer heat, it might seem unusual to find that white grape varieties dominate the wines of Limoux. However, the local Mauzac, plus Chardonnay and Chenin Blanc, are grown extensively. It’s primarily because of altitude; the vineyards range from 200-500 metres above sea level in this undulating and frequently wild landscape known as the Pays Cathare. As a result, the vineyards have the lowest temperatures in southern France. No wonder that Pinot Noir is the red grape that thrives here. These grapes make still and sparkling wines, including the traditional sparkler Blanquette de Limoux. Domaine Delmas is one of the outstanding wine producers in the appellation.

The Birthplace of Sparkling wine

Winegrowing in Limoux probably dates back to Roman times, but Limoux should be famous for being the true birthplace of fizzy wine. The Benedictine monks of Saint Hilaire Abbey made sparkling wine, with the earliest records dating back to 1531. That’s over a century before bubbles appeared in Champagne! The original fizz was by bottle fermentation. It was semi-sweet, cloudy, low alcohol, and made with Mauzac. Still made to this day, this method of production is now known as méthode ancestrale.

However, Limoux produces two other sparkling wines using the classic method established by Champagne. The first of these is Crémant de Limoux, under an appellation created in 1990, which predominantly uses Chardonnay, Pinot Noir and Chenin Blanc. In this wine, Mauzac only plays a minor role.

However, the other, more traditional, classic method fizz is made predominantly with Mauzac. It’s known as Blanquette de Limoux, under an appellation granted in 1938. Blanquette is the local dialect name for Mauzac, which refers to the distinctive white hairs that grow on the vine leaves’ underside. In this wine, it’s the Chardonnay and Chenin which play a minor part. As a result, Blanquette is perhaps less refined than Crémant, but this is an authentic and characterful taste of Limoux. And when made by an artisan organic winegrower like Delmas, the results are delicious. A bottle of Blanquette from Delmas brings back terrific memories and creates new ones. 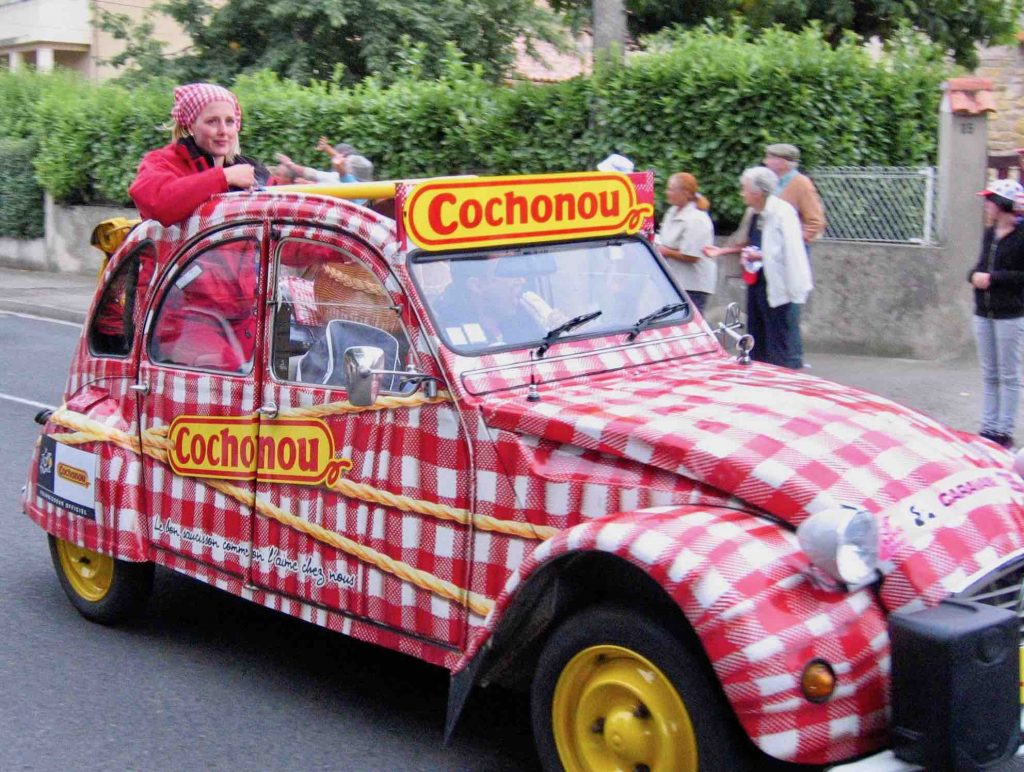 Espéraza, 22.07.2007. We’re standing on a dusty crossroads on the D118, waiting for Stage 14 of the 2007 Tour de France. It will be a long wait and the hours pass languidly on a hot morning. Thankfully a single large tree offers essential shade, though there’s no respite from the din of cicadas. But this country road is a popular spot, and there are hundreds of spectators lining the route. Many have brought picnic tables and chairs, and soon these are laden with wine, bread, cheese, saucisson and beer, all decanted from dusty Citroëns, Peugeot’s and Renaults. Now corks are popping, and children play. But on the road, nothing stirs.

Finally, ahead of the cyclists, the publicity caravan comes into view, a noisy 45-minute cavalcade of floats, showering sweets, keyrings and hats as they pass. By now, it’s so hot that the most popular float is the one using pressure jets to spray the spectators. Kids run alongside, soaked and shrieking. Now the VIP and press cars pass, then the team cars and motorbikes. The leading cyclists are suddenly here, and by the time you realise it, they’re gone in a flash, followed closely by the peloton.

In a couple of minutes, it’s all over; the cyclists have disappeared into the heat haze. Some spectators get ready to leave while others are still enjoying their lunch.

Meanwhile, behind me is a handmade wooden sign that I’ve leant against all morning. In sun-faded letters, it says Delmas, Vins Biologique, Antugnac, à 3 km.

And so, by accident rather than design, we visited Marlène and Bernard Delmas. Their domaine has pioneered organic viticulture since 1986. Antugnac is a village in the Haut-Vallée, the most southern and coldest of the four Limoux subzones. Here, in the River Aude’s upper valley, their domaine has 31 ha of certified vineyards at 260-480 metres altitude. In a natural east-facing arena, they have Mauzac, Chardonnay, Chenin Blanc and Pinot Noir. Then they make Ancestrale, Blanquette and Crémant fizz plus a range of excellent Chardonnay and Pinot Noir still wines that give Burgundy a run for its money. Whatever the style, these all rank among the best examples of Limoux. It was such a welcome and delightful visit that we soon returned – and we’ve been drinking Delmas ever since.

Hence any of the Delmas wines are easy recommendations. However, if I could only pick one, it would be their Blanquette de Limoux, “Tradition”.

This Blanquette is made from 90% Mauzac (the minimum required) and topped up with Chardonnay and Chenin Blanc. Delmas treats this Mauzac-based cuvée exceptionally well, using minimal sulphur, experimenting with skin contact and ageing the wine on the lees for 24 months. There’s around 6g/l of residual sugar to balance the acidity, creating a Brut style.

Blanquette isn’t some cheap Champagne substitute. Instead, it has a personality and energy all of its own, with a golden hue, foaming mousse and long-lasting bubble streams. There is delicate citrus, quince and yeast aroma on the nose. The dry palate has fresh yet silken acidity and vif! Medium-bodied, there’s a gentle apple-skin character alongside grapefruit and lemon flavours. A nutty and slightly spicy ending and a clean finish round things off. This style is best for young drinking, though it develops attractive honeyed notes if kept for a couple of years.

UK stockists include Organic wine specialist Vinceremos, based in Leeds and online. At £13.99, it’s a bargain!

Try as an apéritif – Blanquette is refreshing and uplifting. With food, Trout with almonds is a perfect match!

If you want to discover more about making different sparkling wines, then try this article.