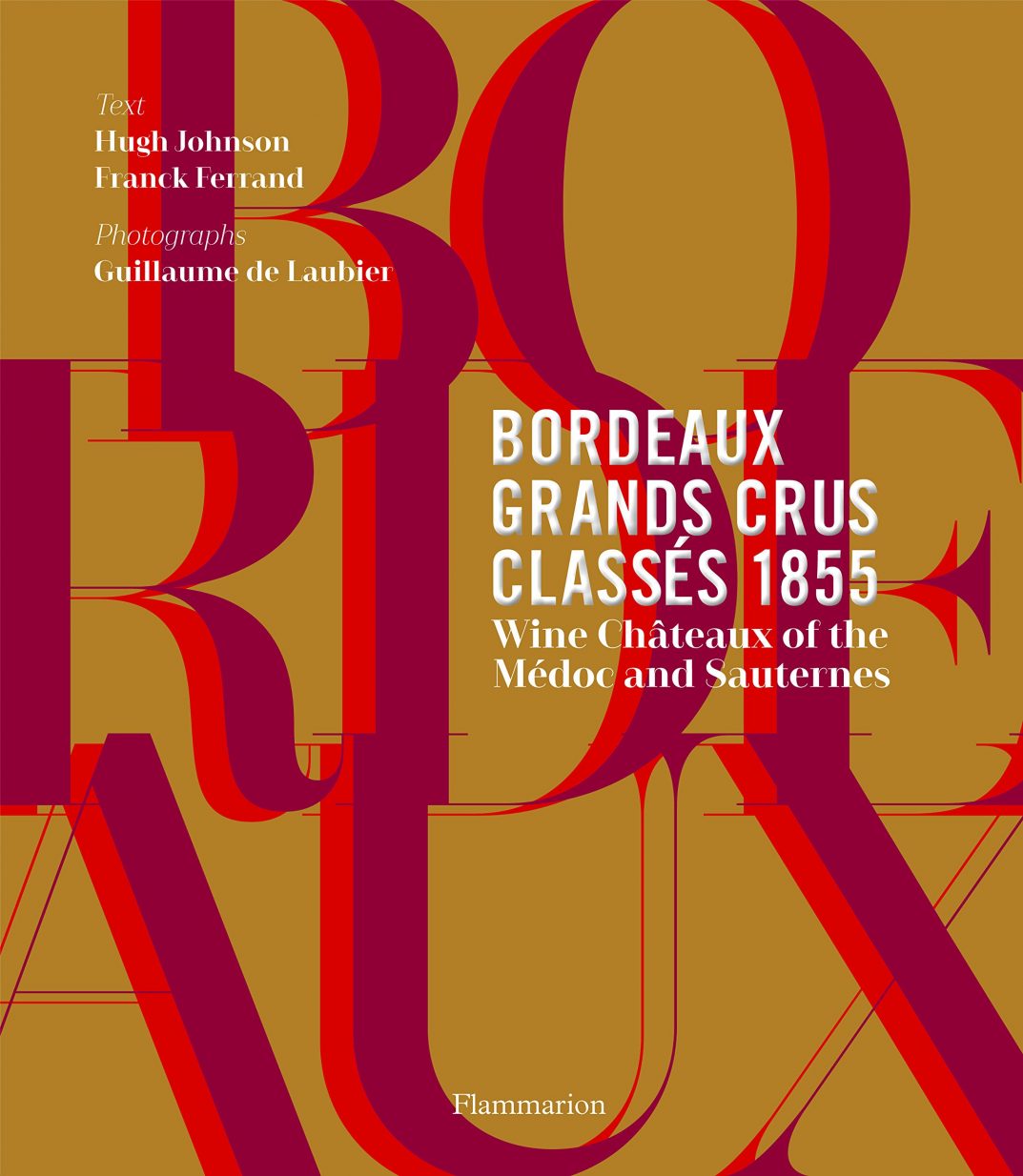 The Bordeaux Grands Crus Classés 1855 gave official recognition to the best wines of the Médoc and Sauternes. Some 163 years later, it’s still a compelling listing, though hardly without flaws. This handsome new book about this classification claims to be the essential reference for wine aficionados.

Does it live up to this billing?

First, a little scene-setting. 1855 was the year the Daily Telegraph began, and when the drug Cocaine was first purified. David Livingstone became the first European to see the Victoria Falls in Africa. Meanwhile, his Queen had already reigned over Britain for 18 of her 63 years.

In 1855, Emperor Napoleon III ruled France after seizing power in a coup d’etat four years earlier. Allied with Britain, both were fighting against the Russians in the Crimea. The phylloxera blight was still in the future, as it would not reach Bordeaux until 1869. From 1875, the vineyards would lay in ruin.

Meanwhile, 1855 was also the year of the Exposition Universelle de Paris.

This industrial fair attempted to surpass Britain’s Great Exhibition of  1851 held at the Crystal Palace in London. Some say Napoleon III demanded a new classification of the best red and white Bordeaux wines for the exhibition.

Napoleon III’s involvement is doubtful. However, wine brokers chose 61 red and 27 white Châteaux. They used trading prices as a proxy for quality rather than rely on the subjective opinion of tasters.

The reds formed a hierarchy, from First to Fifth Growths. In other words, the five levels of Grands Crus.

Except for Château Haut-Brion from Graves, all of the reds on the list came from Médoc.

The brokers chose the sweet whites of Sauternes, on three levels. These are Superior First Growth (Chateau d’Yquem), First Growth, then Second Growth. 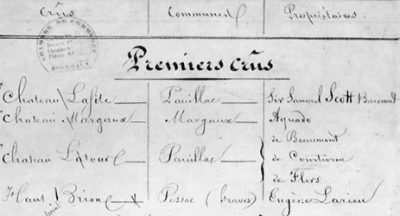 Back to the book

This book is undoubtedly as sumptuous as many of the wines it portrays. Its hefty format uses heavyweight gloss paper between the hardcovers. It’s also a joy to look at, with superb photography by Guillaume de Laubier throughout. He does justice to the magnificence and splendour of the subject.

The layout of the book covers Médoc first, then Sauternes. Every Château has a pen picture by Franck Ferrand. They appear in order of their cru classé. Slightly confusingly, the handy Chateaux addresses are in alphabetical order.

Hugh Johnson has written two brilliant pieces on Médoc and Sauternes. These alone are worth the price of this book. He sums up the 1855 classification in one sentence; that “it is not the last word, but it remains the first”.  Apart from some minor alterations and a single revision, the Bordeaux Grands Crus Classés 1855 listing has never changed.

Indeed, every attempt made to update it has been unsuccessful, bar one. That was the promotion of Mouton Rothschild from Second Growth to First Growth in 1973. Author Franck Ferrand politely describes this as requiring “delicate diplomatic manoeuvring“.

1855 is resistant to the possibilities of revision; there is no relegation or promotion. Hence the changes in ownership, vineyards, winegrowing, and market sentiment since 1855 are not reflected by it.

Any ranking is a snapshot at the time it was made. Without updating, the 1855 list is no longer an absolute crème de la crème. While no one doubts the eminence of the First Growths, the precise composition of the lower tiers is debatable. Today, 1855 is a cultural artefact concerned with the curation of prestige.

To use a football analogy, let’s compare the English soccer first division in 1919 with the Premier League in 2018. Call this philistine or crass; the comparison is apt. In Bordeaux, as in football, the highest levels command immense wealth, prestige and power.

One distinction between them is that soccer has promotion and relegation based on performance. Only nine of 22 teams in the First Division of 1919 are in the Premier League of 2018. Eight are in the Championship (2nd tier), three are in League 1 (3rd), and one is in League 2 (4th). Pity poor Bradford PA. They currently play in the lowly National League North (6th). Meanwhile, many other teams have made it to the top in the intervening years. Some persist, while others can only dimly recall their glory days.

In modern times, fashion, Parker Points and en primeur investments mean 1855 doesn’t reflect all great Bordeaux or price accuracy. Elsewhere in Bordeaux, official lists do enable revisions. Unfortunately, that has left a legacy of vicious legal battles driven by status and profit. Perhaps, therefore, we should be grateful that 1855 is unchanging.

This book would be a stronger reference work for addressing the issue. The late Alexis Lichine, once the owner of Prieuré-Lichine (4th Growth), famously sought revisions and proposed alternatives. The Château entry is silent on this point.

The Médoc and Sauternes are, of course, blends. In the Médoc, it’s predominantly from Cabernet Sauvignon, with Merlot and Cabernet Franc. On occasion, a little Petit Verdot also plays a part. But this wasn’t always the case. The devastation caused by phylloxera brought the opportunity to restructure the vineyards. Then the previously commonplace Malbec and Carménère varieties all but disappeared.

This change must have fundamentally altered the wines, probably for the better. Those varieties still occasionally exist at some of the 1855 Châteaux. So it would’ve been interesting if the book showed where. For example, Carménère is at Mouton-Rothschild and Clerc Milon. Clerc Milon also has Malbec, as does Gruard Larose.

Similarly, Muscadelle and Sauvignon Gris remain minor components of some Sauternes, alongside the stalwarts Sémillon and Sauvignon Blanc. Doisy-Védrines in Barsac is an example.

In short, including more viticultural details would be welcome.

Similarly, more details about winemaking would be useful too. Furthermore, showing the other wines also made at these Chateaux wouldn’t be out of place. For example, “second” wines (some of which outperform many classed growths) and dry white wines. As Hugh Johnson says, the métier of Bordeaux is about producing luxury wines. Most Châteaux offer more than one.

The book also lists and rates each harvest from 1855 to 2015. However, this does not always differentiate between red Médoc and white Sauternes. Each has a different terroir and needs significantly different optimal conditions. In any year, stellar in one might be ordinary in the other.

This book omits the revision controversy at the heart of the Bordeaux Grands Crus Classés 1855. As an essential reference, this book should include it.

The Bordeaux Grands Crus Classés 1855  is somewhat like the Magna Carta, in that it is foundational. The endurance of this historical document is a remarkable feat. This book captures this very well and offers many pleasures to the reader.

If you are a Bordeaux lover, then you’ll particularly enjoy Hugh Johnson’s excellent pieces, luxury production and stunning photography.

Like this book about the history of wine? Then try this one.

Meanwhile, find out about the Right Bank of Bordeaux here.