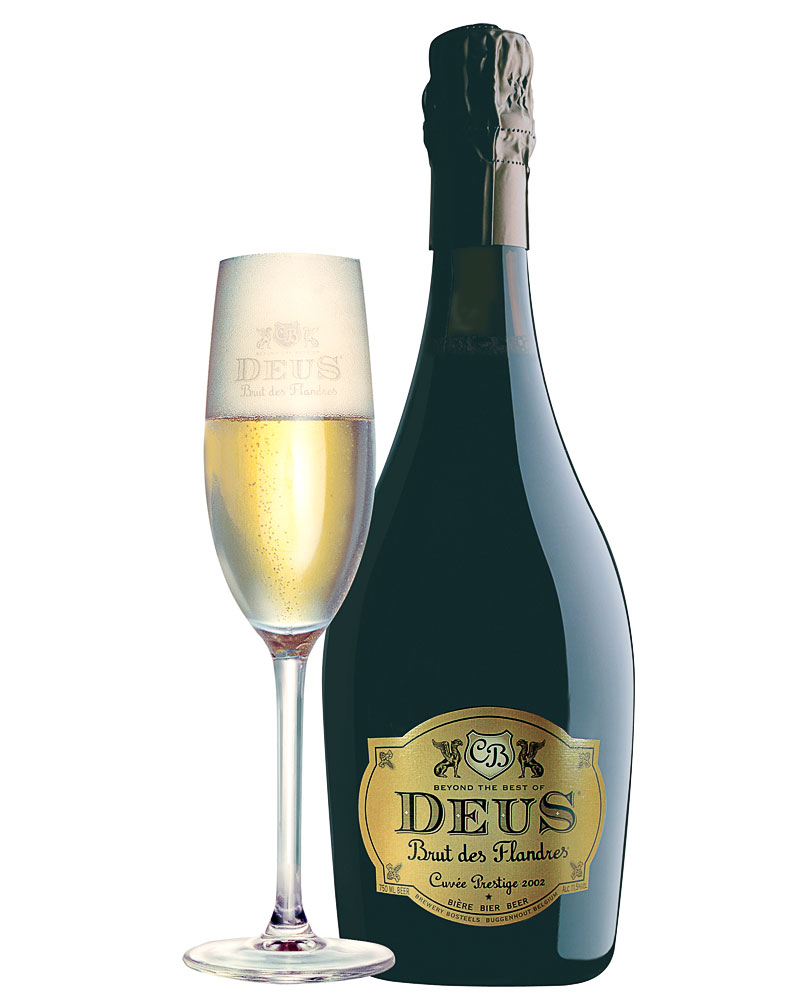 The Belgians are master brewers, and their beers come in a wide range of styles, including the unique and unusual. One such beer is DeuS, brewed by the famous Bosteel Brouwerij, founded in 1791 in Flanders. Bosteels is at Buggenhout, between Ghent, Antwerp, and Brussels and is world-famous for it’s traditional Kwak and Tripel Karmeliet beers.

DeuS is entirely different to 99.9% of other beers thanks to how its made and hence how it tastes. This cuvée prestige is a whopping 11.5% abv. That’s huge for a beer, but not for wine, and you drink this beer like a sparkling wine.

Because it’s a beer, it’s top-fermented using only malted barley, yeast, hops and water at Bosteels. However, the resulting brew is then bottled and shipped to the Champagne region of France. There it undergoes a second fermentation in the same bottle, maturing in cold chalk cellars. Hence this part of the process is remarkably similar to making Champagne sparkling wine.

In more detail, the blonde beer in the bottle has another dose of sugar and yeast added. That induces a second fermentation which adds the tiny bubbles, lees flavours, and more alcohol. After twelve months of ageing, riddling and disgorging by hand, the bottle is topped up and sealed with a champagne-style cork closure.

The final result is what Bosteels originally called Champagne Beer, designed to drink like Champagne. DeuS still comes in a Champagne-style bottle, and, when launched in 2002, the original label was a dead-ringer for Dom Perignon, using a similar shield-design. Naughty! Legal threats meant that the design was changed and the C-word dropped. Instead, it’s now “Brut des Flandres.” Regardless, to call it mere Belgian Blonde beer is to do it a disservice.

How to drink it

DeuS is an ideal apéritif, or brilliant with the usual Belgian food specialities; oysters, eels, asparagus or of course, Moules Frites. Serve it in Champagne glasses, and ensure the bottle is “ice-cold.” The best way is to chill it down for 12 hours or more in the ‘fridge and after that either another ten minutes in an ice bucket or twenty minutes in the freezer. This long refrigeration down to 0-4°C reduces foaming after your cork pops.

And it’s lively stuff when opened. Afterwards, it settles to a pale golden body with a snow-white head that looks remarkably like sparkling wine. The nose is fresh and floral, with apples and citrus in abundance. Sip it; there’s a dry maltiness overlain with apples, hops, ginger, and cloves. It’s zippy, balanced and silky on the palate, with a slightly bitter finish. All this complexity belies a heady strength.

Warning: unlike many high alcohol beers, it does not taste strong at all. So if you gulp it fast, you’ll be on the floor in no time. Instead, sip it like a wine and enjoy all those subtle nuances.

In the UK,  it’s available from specialist shops such as The Drink Shop, at £17.71. A big price tag, even for ultra-premium beer. However, it comes in a wine sized bottle at 750 ml and so will serve six glasses. This beer sets out to compete with high-quality fizz as a celebratory drink, gift, or sheer indulgence. If viewed like that, then the price becomes more palatable. You can keep a bottle unopened for a couple of years, but unlike Champagne, it won’t improve.

DeuS is Latin for “God.” That’s the first word you’ll utter when tasting it for the first time. Whether you are a beer or a wine lover, it’s an experience you won’t forget!