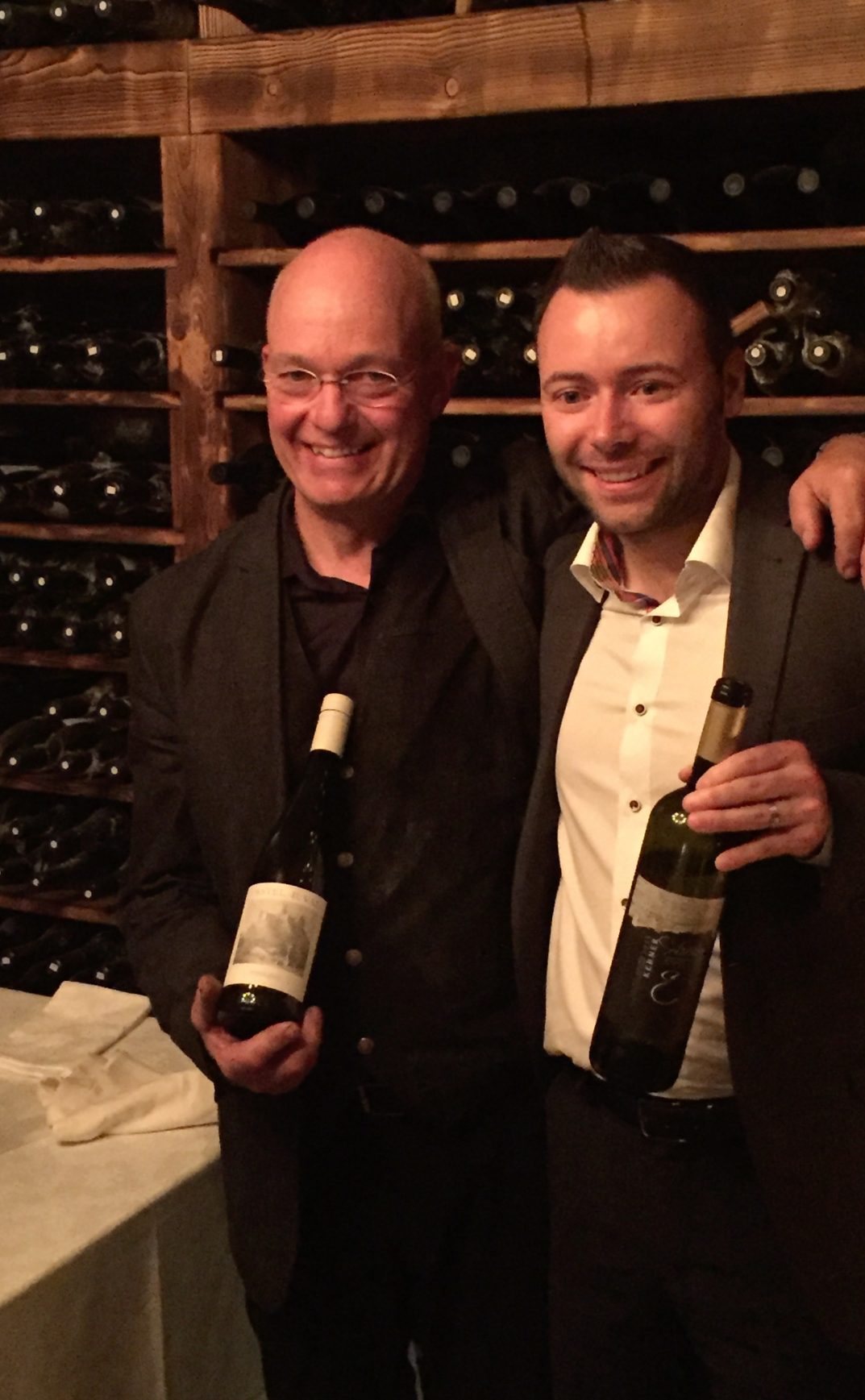 A brilliant Winemaker Dinner in the Alto Adige

One of the best Winemaker Dinners that I’ve been to was earlier this year in the Alto Adige (Südtirol), where Italian and German cultures meld together. The Winemaker Dinner took place in the town of Merano, some 30 kilometres north of Bolzano in Italy at the “Ansitz Plantitscherhof”. It’s one of the 29 Vinum Hotels in the region, an association of private hotels owned by wine-lovers. Some of these, like the Ansitz Plantitscherhof, also make wine. This hotel’s imposing, deep cellars date all the way back to 1277. The four cellar rooms house an impressive 21,000 bottles. Naturally, many of these are local. However, I was particularly impressed by the great bottles stocked from around the world. There’s something here for everyone, including “natural” wine lovers. What a splendid venue. 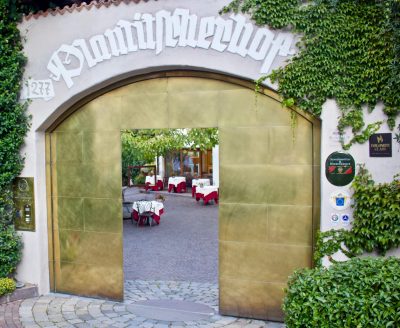 The hotel’s modern spa area, spacious suites and 36 rooms offer South Tyrolean charm and a strong sense of style. You can even rent a classic Alfa Romeo from here to tour the vineyards. Gastronauts are of course well catered for, with superb food by Chef Norbert Hanifle.

Indeed, this entire region is a gourmet paradise, with I’m told, six Michelin 2-star and eight Michelin one-star restaurants! Hotelier Johannes Gufler of Ansitz Plantitscherhof is also a qualified Sommelier. Hence it was a pleasure to tap into his knowledge of this beautiful region.

In fact, the Winemaker Dinner was set in one of the ancient cellars, hosted by Johannes. Surrounded by bottles, we met with Armin Gratl, Managing Director of the Eisacktaler Kellerai/Cantine Valle Isarco, and Martin Aurich of Unterortl/Castel Juval in Val Venosta. They had brought a selection of their wines to pair with the menu. Both were also incredibly generous in spending time away from their busy harvests. 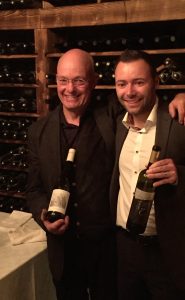 Some explanation about each of these wineries is in order. Both are from steep mountain valleys located in the far north of the Alto Adige wine region. They have many contrasts in their approach to winemaking, but the results at both are spectacular wines.

Unterortl is in the Val Venosta. This valley stretches from Merano into the western Dolomites, and is home to heroic viticulture. No wonder Reinhold Messner of mountaineering fame owns this property. The vineyards fall precipitously below the castle eyrie, at between 600 and 850 metres altitude.

Martin Aurich and his wife Gisela are the tenants at Castel Juval, and responsible for the winery and distillery. They created these densely planted vineyards from scratch in 1992. They involved a great deal of research – Martin is a Professor of Oenology. There are four hectares of vines, making some 30,000 screwcapped bottles in a typical year. They produce Pinot Bianco (Weissburgunder), Müller-Thurgau, Riesling and Pinot Noir (Blauburgunder). Grapes brought in from other growers in the valley help supplement production, including the rare Fraueler.

As the name implies, Cantine Valle Isarco (Eisacktaler Kellerai) is a cooperative in the Valle Isarco, (the Eisacktal), which runs north-east from Bolzano up to the Brenner Pass and thence the Italian/Austrian Border.  It’s the youngest cooperative in the region, dating from 1961. The modern winery was re-established after an avalanche crushed the original. They represent 130 growers, with 150 hectares of vineyards and make 800,000 bottles per year.

Eisacktaler Kellerai makes a multitude of wines as their growers come from all parts of the valley. It means that in the vineyards of the northern Isarco you have mainly Müller-Thurgau, Kerner and Riesling grown. Meanwhile, Sylvaner, Pinot Grigio, Gewürztraminer and Grüner Veltliner come from the middle section. Finally, there are Sauvignon Blanc, Chardonnay, Pinot Bianco, Pinot Nero, Lagrein, Zweigelt, Blauer Portugieser and Schiava. Those are from the lower and warmer southern part. The Kellerai uses high-quality DIAM cork. There is even production of fizz and passito sweet wines. Despite their vast range, the winery is no stranger to top international awards and accolades. 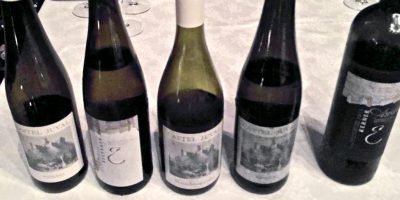 First, aperitivo, paired with Juval’s Weissburgunder 2016 and Eisacktaler’s Sylvaner 2016. The Weissburgunder had crystalline purity and iodine minerality. The Sylvaner was equally delicious and refreshing, with alfalfa notes. Both were superb examples, especially with cream cheese.

There were two different starters. Sashimi salmon with marinated artichokes and dried tomatoes came first. It came with topinambur terrine, made with Jerusalem artichokes. Juval’s Riesling 2014 was splendid with this. It even stood up to the artichokes, a well-known wine-killer. The Riesling was dry, with fresh notes of peach, lime and grapefruit. It’s all nerve and tension, with a little botrytis for extra complexity. A brilliant wine and a good argument for expanding Riesling plantings in the Val Venosta.

The second starter was Tortellini with a pumpkin and amaretti filling, accompanied by duck ragú and fried capers. I half expected a red wine. Instead, Eisacktaler presented a memorable white-wine; “Aristos” Kerner 2015 is from a single vineyard at 950 metres, the highest of all the Kellerai vines. It had fabulous aromatics, leesy power and a superb acid spine with peach and mango fruit that made for a terrific food match. In short, it was one of my top ten wine picks from the Alto Adige during my visit.

Now for the main course. Veal fillet in an olive crust on a bed of braised pearl onions and fried potato balls. It needed something ultra-special to drink with it. Juval’s Pinot Noir 2012 (Blauburgunder) seemed made for the task.  A beautiful alpine style Pinot Noir; wild berries, autumn leaves, a classic. Moreover, this is a perhaps the best Italian Pinot Noir I’ve ever had. Naturally, it’s also one of my top ten Alto Adige picks. In an evening of fantastic wines from both wineries, this bottle stood out for me. Luckily for us, Martin Aurich had also bought a bottle of 2009.

After a brief but highly animated break, it was time for dessert. If you can suggest anything more delicious than a warm Valrhona chocolate soufflé, then please let me know. Moreover, there were vanilla, pineapple and mango sorbets on the side.

Now a hush had descended on the room, which tells you what we all thought of the dessert. As we needed a sweet wine, Eisacktaler delivered a gem; Guwürztraminer passito “Nectaris” 2014. With 228 grammes of residual sugar per litre, this was a superb passito wine. It was fresh and clean, without any noble rot. Just a bed of rose scents followed up with honeycomb and tangerines. It’s rare, as there are only 1,000 bottles per year, with the grapes coming from just one grower. Wicked! 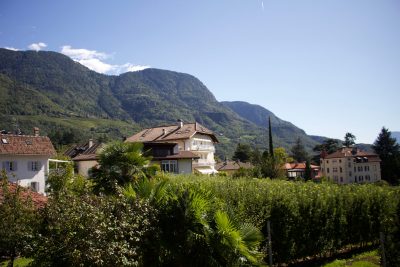 A great advertisement for the Alto Adige

The Winemaker Dinner was a superb advertisement for all the joys of the Alto Adige. The location, the hotel, the dining room, hospitality and food. And of course, each winemaker showing their brilliant wines in turn.

The next time I’m in Alto Adige, I’ll be visiting Unterortl/Castel Juval and Eisacktaler Kellerai/Cantine Valle Isarco for sure.

Lastly, if you’re planning a trip to the Alto Adige, then I recommend you check out the Vinum Hotels for your stay. The entire experience at Ansitz Plantitscherfhof was memorable, and it’s a perfect base from which to explore. I look forward to returning to just as soon as I can.

For more about the Alto Adige / Südtirol, check out my previous article, Live at The Witch Trials.