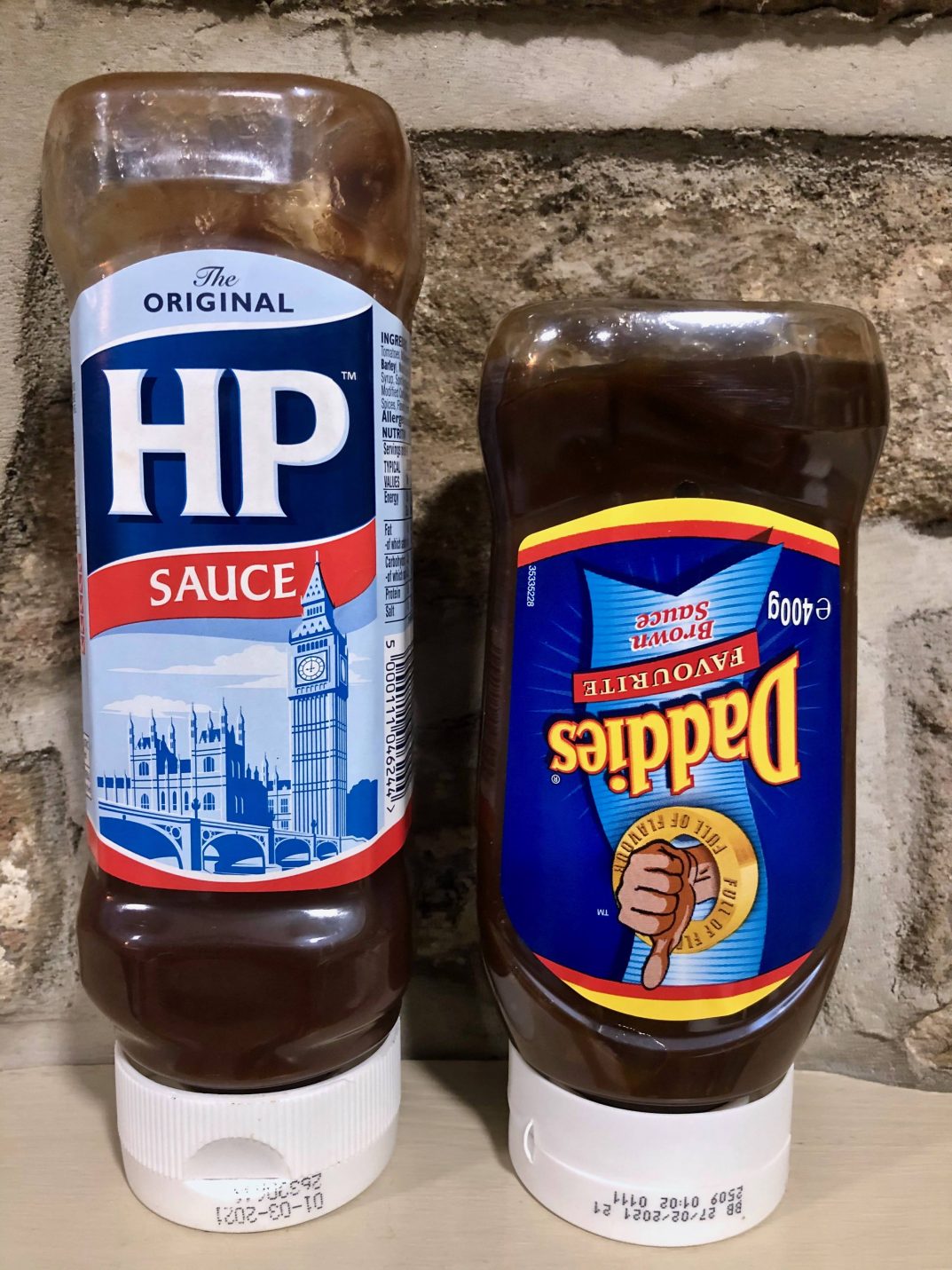 Brown Sauce. Huh? It’s ubiquitous here in the UK, often forgotten about until that crucial moment you automatically reach for it and find it’s not there. Panic ensues while you search the kitchen cupboard. Or there’s the slightly embarrassing feeling if you need to ask for it when eating out, so revealing your humble origins. It’s blessed with a dull name too. Brown sounds so, ah, brown.

Why then write about Brown Sauce? It’s a cultural icon. It’s an essential part of everyday life. Oh, and it tastes bloody good.

Reasons enough then, though I’ve been spurred on by a recent piece written by a Director of the Instituto Cervantes in London*, Ignacio Peyró. I quote from the Spanish edition of Esquire magazine. He said this: “Another sauce whose contemplation enlivens the heart of the Briton is the HP Sauce, named for its popularity in the Houses of Parliament. Every Sunday, hectolitres of this barbecue sauce; sweet, unsophisticated, are consumed with the English breakfast.**.”

Mind you; he also called Marmite “crap and part of the archive of unspeakable British things”***. Hey, Marmite won’t mind, they market it in terms of love and hate. Along the way, he also pours scorn on English Mustard and Mint Sauce while suggesting that Branston is only fit for drunken people. More curiously, Bread Sauce and Piccalilli receive praise, while tomato ketchup isn’t even worthy of a mention. He even forgets to mention Salad Cream, the existence of which is a crime against humanity.

How to respond? Well, some might attempt a spiteful riposte about Spanish foods, or start some quasi-brexiteer discussion about the Armada. Me, I’m a staunch European. Hence my response is to point out the error of his ways and bring him to the light. In any case, I like Spanish cuisine and can’t think of much I don’t like. To be fair, Señor Peyró has previously praised other Brit foods, such as pies, roasts, and kippers – so he’s not entirely irredeemable.

He’s right in one thing, the contemplation of Brown Sauce certainly enlivens the heart of this Briton. Hence without further ado, here’s my ode to Brown Sauce, with a few diversions along the way.

Let’s start with HP, given that it had a 73.8% market share of UK saucy things in the UK in 2012, though since then that’s probably declined. These days it faces more competition from a whole raft of hotter, chilli-based upstarts and imitation barbeque sauces. It’s still, however, a market worth millions.

Frederick Gibson, a Nottinghamshire grocer, created it in 1870 from the now-classic ingredients; vinegar, tamarind, dates, molasses, tomato, flour, salt and other spices.  As is usual, the exact recipe is a closely guarded secret! For me, it’s interesting that the origins of brown sauces lie with vinegar production.

The HP name was registered in 1895 after Gibson found that the Houses of Parliament served it. A picture of this cradle of democracy has been on the label ever since. There’s even a version of this showing the scaffolding currently around the Elizabeth tower. It’s indeed a sauce with establishment credentials, though hardly aspirational.

Gibson sold the brand in 1903 for £150, to a company that would become HP Foods. For decades it was made in a famous factory on the Aston Expressway in Birmingham, sadly now demolished. Ownership has passed through several hands; to Smedley, then Imperial Tobacco, then Danone and finally to Heinz.

It was Heinz that closed the Aston factory in 2007 and moved production to the Netherlands, where it remains to this day. Quite rightly, there were questions in the Houses of Parliament on 17 May 2007 at Prime Ministers Questions. Tony Blair, preoccupied though he was with Iraq, pledged to lend his support to the workers, whose admirable “Save our Sauce” campaign failed to prevent a multinational crime. 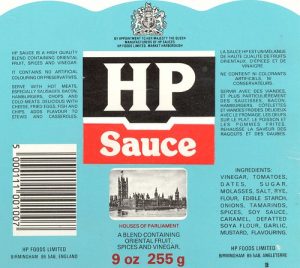 Long before then, I well recall that HP sauce bottles were a great aid to my schoolboy French. Bizarrely, a description of HP sauce on the neck label was in both English and French, a practice that continued until 1984. It began, “La Sauce HP est un Mélange de Haute Qualité”.  However, my favourite memory of this narrative was when comedian Marty Feldman sang the words in the style of Brel and Aznavour. You can watch a video of that here.

Meanwhile, the origins of rival brown sauce Daddies wasn’t far behind HP. That brand started in 1904. When I was a kid, I thought my dad made it. Later on, I found out he’d lied to me. Ironically, Daddies is also owned by Heinz, having gone through the hands of HP Foods and Danone. Daddies sauce isn’t made in the UK any more either, this time that’s in Poland.

While we’re here, some might remember Crosse and Blackwell, onetime makers of Branston Pickle and Sarson’s Vinegar. Their brown sauce had a trademark of “Ten O’Clock Tested”. Again, as a young boy, I didn’t know what this meant, but it was mightily impressive. Once owned by Nestlé, Branston and Sarson’s now have Japanese owners, and their Branston brown sauce is a little too fruity for my taste.

A brown sauce called OK still exists too. It was from George Mason in London before Colman’s bought it. Mason’s Art Deco factory in Wandsworth now lies empty, and OK is from Norwich. This sauce’s biggest market these days is the Far East, or at your local Chinese takeaway.

In modern times, there is plenty of competition from the likes of supermarket own-labels. Somehow these always strike me as inferior. They’ve probably repackaged brands, yet I’ve never yet felt sufficient urge to make any comparisons. Still better than nothing, especially if the only available alternative is red.

A stalwart of caffs up and down the land, brown sauce is an essential companion to the Full English Breakfast. However, I prefer it with a bacon sarnie, or Fish and Chips (alongside salt and vinegar, natch), and with pies, sausages and hard cheese. I also like to add a dollop to soups and stews. It enlivens the senses, a complex umami assault that somehow enhances the taste experience. All I ask is that it comes from a bottle, never from those dreadful sachets.

As far as I know, there is no collective noun to describe brown sauces (you know, like a flock of geese or a murder of crows). May I suggest a Piquance of brown sauce?

My favourite brown sauce? Mmm, both HP and Daddies delight but Daddies is fractionally less sweet, so edges it for me.

And a bottle of wine to go with brown sauce? How about Vega Sicilia Unico Reserva Especial from the Ribero del Duero? I’m sure Ignacio Peyró wouldn’t approve.

*The Instituto Cervantes is the official Spanish Language and Cultural centre. Founded by the Government of Spain in 1991 to promote Spanish language teaching throughout the world as well as Spain’s co-official languages, in addition to fostering knowledge of the cultures of Spanish-speaking countries.

**My translation – I’m trying to learn a little Spanish during Coronavirus lockdown, going with my bad French and Italian. Oh, and HP isn’t Barbeque sauce. And why only on Sundays?

*** My translation again – meanwhile, my views on Marmite are entirely positive, see my article here.