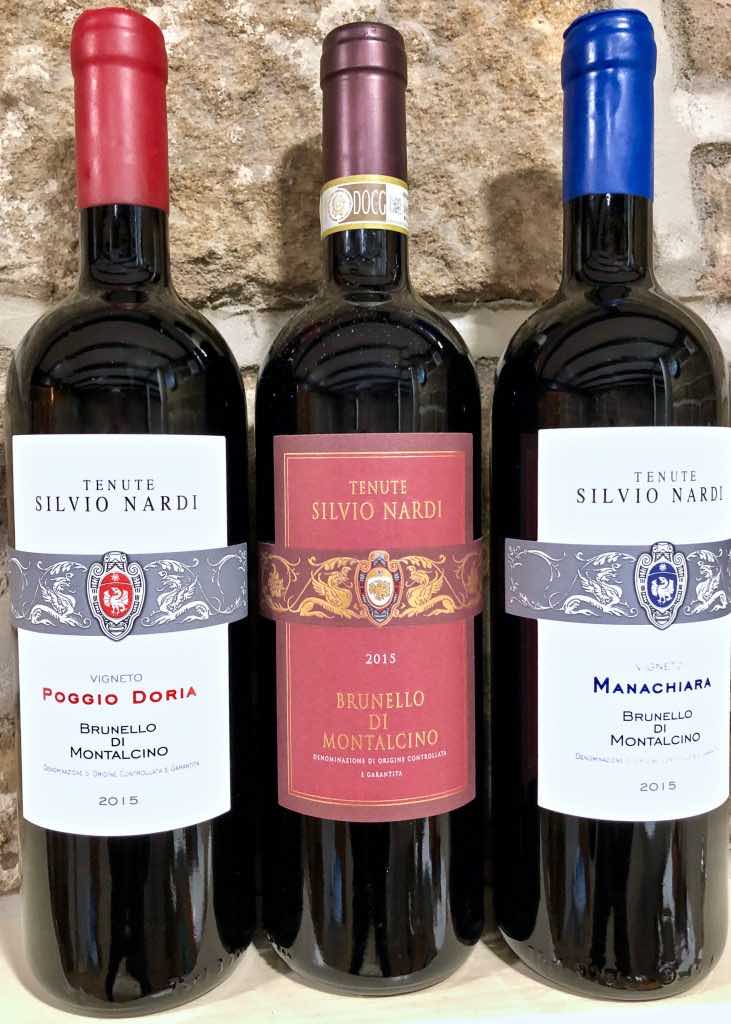 Tenute Silvio Nardi has just released their three 2015 vintage Brunello di Montalcino DOCG wines. This article is about how each one expresses their particular Montalcino terroir. Let’s begin with a little more about Brunello and why Nardi is a classic producer. Then we can see how these wines express their environments and Nardi’s craft. 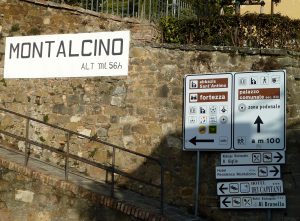 The Brunello di Montalcino DOCG in Tuscany is about 40km south of Siena. The world-heritage hilltop town of Montalcino is at its centre, perched high up at 564 metres. Brunello is by law a dry red wine made exclusively from Sangiovese, and long may that continue. Sangiovese Grosso is their local clone, known as Brunello.

Although wine has been made here for centuries, the first Brunello di Montalcino was from the Biondi-Santi estate, with its release in 1888. The style requires long ageing, though the DOCG rules have shorted the minimum ageing period to four years (a minimum of two years in barrel plus a minimum of 4 months in bottle). Unfortunately, that means that the earliest sale is on January 1st, five years after the vintage.

By the end of World War II, Brunello di Montalcino had gained a reputation as one of Italy’s most exquisite and rarest wines. The only producer was Biondi-Santi, with just four vintage releases (1888, 1891, 1925, and 1945).

High price and prestige encouraged other producers to emulate them, though no one could have accurately predicted the scale of future success. By 1966, when the region obtained its DOC, there were 13 producers and 76 hectares. By the time it became DOCG status in 1980, there were 53 producers. Now there are over 200 producers that bottle Brunello di Montalcino.

As might be imagined, this has meant considerable growth in the planting of vineyard areas within the DOCG boundaries. Although that only amounts to about 15% of the total land area, the vineyards now cover 2,100 hectares*.

This massively enlarged area unsurprisingly contains many different terroirs. That’s because there are many different soils, microclimates, aspects and altitudes. It means that specific sites in Brunello are uniquely suited to Sangiovese, and in those, this grape variety shows its terroir-speaking abilities. That justifies Brunello as a Grand Cru and why it’s become one the worlds most celebrated and iconic wines.

However, in such a large area under the vine, not every site is well endowed. Hence there have been calls for formal classification of the best places or subzones. But such measures are always controversial, especially in such a prestigious area. Consequently, the most reliable guide to world-class Brunello remains the producer’s name and reputation, at least for the foreseeable future.

And so we come to Tenute Silvio Nardi. This estate commands great respect as one of the early Brunello producers and one of the founders of the Brunello Consorzio. It also creates authentic Brunello wines from owning high-quality vineyards in contrasting parts of the DOCG. That’s shown on the enclosed map below.

On the one hand, this gives it the ability to blend these parts and create a Brunello in a recognisable house style. But, on the other, it also enables the creation of two Grand Cru vineyard selections of wines expressive of their particular terroir. These two are the estate’s yin-yang; wines revealing very different characteristics yet still clearly Brunello. 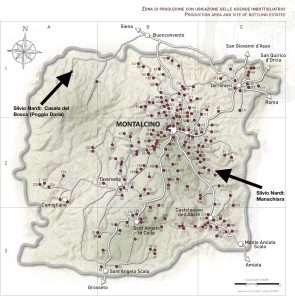 Tenute Silvio Nardi is one of the oldest Brunello Estates. It was founded in 1950 when Silvio Nardi purchased Casale del Bosco in the northwest of the DOCG. It comprises 30 ha of vines and the winery. Further expansion came in 1962 by adding the Manachiara estate (42 ha) in the east. Manachiara is 25 km south of Casale del Bosco and is warmer and drier.

Emilia Nardi runs the estate today, representing the third family generation and has overseen many improvements based on terroir. For example, she introduced precision viticulture after extensive soil studies, matching specific grapevine clones to individual sites. As a result, there are five Nardi biotypes of Sangiovese Grosso, while the rootstocks used are typical for Brunello, chosen for drought resistance.

There are more than 50 separately-fermented parcels, a rich palette to select from for the Brunello blend, plus the ability to make those two vineyard selection Cru wines, namely Poggio Doria from Casale del Bosco and the eponymous Manachiara.

Nardi makes all three wines in much the same way.  Maturation is firstly in French Allier oak barriques, then followed by large Slavonian oak barrels. Blending then takes place, with subsequent bottle ageing. Hence the differences between the wines are explained by their different terroirs.

Note: Decanting of all three wines was for two hours, given that they are still young. Stockist and prices are for the 2012s (as these 2015s are expected in the UK soon). 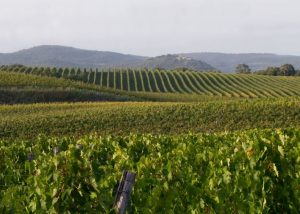 Poggio Doria is a vineyard selection Cru from the Oria vineyard at Casale del Bosco, northwest of the DOCG. It’s a heavily wooded area with a cooler microclimate, and it’s susceptible to frost. There’s also fog, which can slow down grape ripening. It has cooling dry winds from the north, which promote aromatics in the grapes and dries the shallow soil out. Replanting the vineyards was after a detailed soil analysis in 1993, which found 25 different examples at Casale, including sands and clays. The subsoil in places also contains Jasper, a dark quartz material.  The altitude is 260 metres.

Poggio Doria means “the golden hilltop”, with free-draining and Jasper-rich sand and clay soils.  It faces west, so it gets the afternoon and evening sun. The resultant wine is lighter coloured and softer, yet with more aromatic intensity, elegance and complexity.

In the glass, the wine is ruby red, with garnet highlights. It’s highly aromatic, with red berry fruit, cloves and a savoury note. The elegant palate has exquisite balance, with fleshy red and black fruits and a balsamic finish. The tannins are still a little chewy, as this wine is for the long term. Ideally needs another 2-3 years and will go on ageing beautifully for decades, if you can resist. Champagnes and Chateaux   £78.50 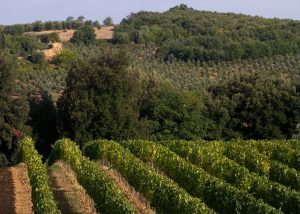 The Manachiara estate is south-east of Montalcino, in the Val d’Orcia, a warmer area of small vineyards comprising 30 plots. These have a south-easterly exposure facing the sunrise, and indeed Manachiara means sunny morning. The altitude is a little higher at 300 metres. The soil is sandy, mixed with clays, marl and fossil seashells. Manachiara (the Cru wine) is from three plots, these being Piano di Manchiara (2 ha), Albatrea (1.5 ha) and Stercolati (1.7 ha).  The grapes ripen over a week earlier here than at Poggio Doria.

The colour is a dense and deep ruby red. Aromatics are black cherry and violets, a little tobacco, though slightly less intense. On the palate, there’s more structure, trading elegance for muscular power; more alcohol and more prominent tannins, a little fresher acidity and dominated by black cherry fruit. Full-bodied and powerful, it finishes long and clean. This wine still needs time to integrate and develop complexity, perhaps 3-4 years, definitely one for keeping. But, again, it will transform over the decades to come. Champagnes and Chateaux  £78.50

Finally, this is the Brunello blend from up to 50 Sangiovese plots sourced from across both the estates of Casale del Bosco and Manachiara at an average altitude of around 350 metres. Consequently, this wine is more of a “house style”, combining two very different terroirs into a seamless whole representing a classic Brunello.

The colour is a ruby red colour with garnet flecks. Aromatics are red cherry, anise and tea/bergamot. The palate is silky and long; the tannins polished and integrated, with no sharp edges. Elegant and sophisticated, great poise. There’s black cherry, damson, and autumn leaves. Then, as it opens up, there’s tobacco and figs, anise,  leather and liquorice on a long finish.

While this wine has the considerable ageing capacity of great Brunello, it’s already drinking beautifully now. So in Brunello terms, it’s also something of a bargain. Champagnes and Chateaux   £36.99

Each of the Grand Cru wines clearly expresses its terroir. Meanwhile, the blended wine is a lovely expression of how great Brunello can be and makes a great introduction to the style. Finally, all three are authentic wines that couldn’t come from anywhere else.

As for preference, that’s down to individual taste because it’s about difference rather than better. It’s tempting to say that I prefer whichever one is in my glass! If you want to buy a Brunello from this stunning vintage to drink now or relatively soon, then the Blend is the obvious choice, as the Grand Crus need more time. For those that can wait, then those yin-yang wines will ultimately be superior and already offer clear distinctions between them. Choose Poggio Doria for elegance and poise. For muscular power, go for Manachiara.

Those with deeper pockets should buy all three and enjoy comparing them over the years to come. I can dream, can’t I?

*Source: Consorzio del Vino Brunello di Montalcino. My thanks to them also for helping me out with some of the technical details.

I’ve written about Tenute Silvio Nardi previously when I reviewed their blended Brunello di Montalcino 2010. That was (and is) an excellent wine from an exceptional vintage.