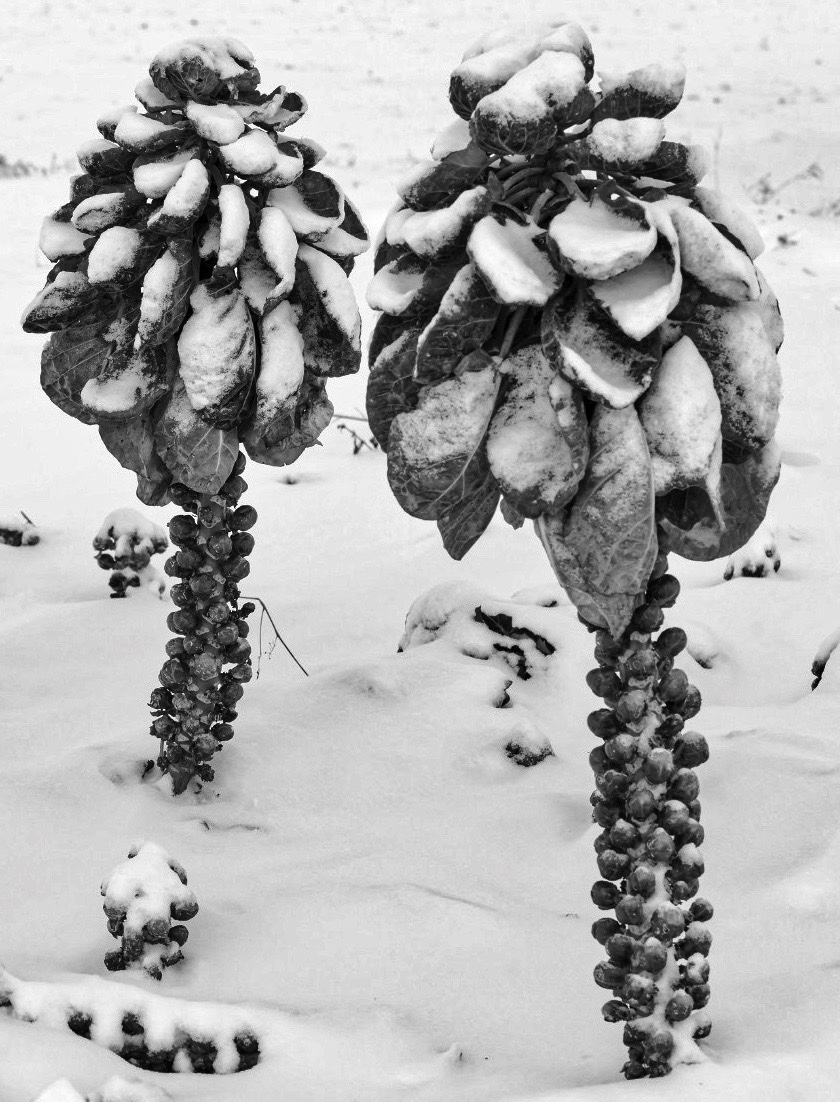 Given that it’s Christmas-tide, it’s time to visit Brussels sprouts. Their incredible history intertwines with mine.

We arrived late one autumn Sunday afternoon after a seemingly interminable journey. As we got out of the car in Potton market square, we were assaulted by a pervasive sulphurous stench. Later, I would come to recognise it as the authentic smell of Brussels sprouts fields.

Aged seven, I was confused by this foreign place. All those the trees, birds and endless fields full of growing things. What on Earth was I going to do here? Being a North London boy, the countryside was unfamiliar, and I didn’t like it. Muddy parks, arthritic trees and weed-infested bomb sites were all I had known.

At first, I baulked at the idea of coming to live in this rustic backwater. In my mind, I had not yet replaced plain urban concrete with the new freedoms of rural life. In the Sixties, Bedfordshire sure wasn’t swinging either. We couldn’t even get BBC on our telly.

Potton was a traditional country market town. Built mostly from local brick the buildings were pretty, if shabby in those days. Between them were small fields and market gardens, each sporting a useless old scarecrow. There was the constant bang of bird-scarers.

Mr Beeching had not long closed the once busy railway and its station. Buses ran infrequently and only to the nearby towns. These were Biggleswade (whose ridiculous name was later used in a Monty Python sketch, oh, how we laughed) and Sandy (so-called because it just is). London seemed a million miles away.

Here too was a local accent which nearly everybody spoke except me. It was an attractive, if strangulated, East Anglian dialect. Meanwhile, more than two dozen pubs slaked the thirst of a population that numbered around 2,500 souls.

Market gardening became established in mid-Bedfordshire back in the Eighteenth Century. Plant a stick here, and it will grow. Onions, potatoes, root and salad vegetables thrived; especially in the rough triangle of land cornered by Potton, Biggleswade, and Sandy. In the 1850s the arrival of the railway meant an enormous increase in production was supplied to London. On the return journey, horse manure and shoddy became fertiliser for even more crops.

As everyone relied on eating local, seasonal vegetables, Brussels sprouts became the winter staple. They had originated in Belgium some 500 years before. They grew so well in this part of mid-Bedfordshire that it was once responsible for 40% of Britain’s entire production. At the peak, before the Great War, a steam train of up to fifty produce waggons departed from Potton station for London every day. Even vaster amounts went from Biggleswade and Sandy, feeding Manchester, Leeds and Glasgow as well as the Smoke.

Brussels sprouts were hand-picked, only taking those of the right size. The fields were often too small for machines and, in any case, there were plenty of locals to help out. Neither were the stems of Brussels sprouts ever hacked off in one wasteful piece as they are today. The smaller buttons were left to grow for a later harvest. That meant that a single field could produce several crops throughout the wintertime.

There were many different varieties too; the Bedford-Fillbasket (yes, really!) had the biggest yields and the Ashwell the most consistent size. But the Noisette was the King of the sprouts because it had the best taste. Whatever the cultivar, they needed a sharp frost to improve their flavour. The large open leaves, called Brussel Tops, were also a particular delicacy.

So, on a dark winter morning, a phone call would summon us to a local field to pick sprouts in the foggy half-light, twisting and snapping them off the stems, frozen as hard as bullets. It was slow progress working up and down the frost-slicked rows, waist-high in melting ice. The objective was to fill a huge net with sprouts while keeping the circulation going in hands blue with wet and cold. Gloves were useless, and frostbite was an ever-present risk.

Long-term picking even created a particular industrial disability, inappropriately called Brusseler’s elbow. The older men had deformed wrists created from decades of sub-zero drudgery, though their elbows seemed fine.  Once the Brussels sprouts fields disappeared, so did the condition, for which be thankful for small mercies.

Brusseling also had a distinctive uniform. The older men would arrive on old black bicycles in their threadbare suits and cloth caps. An outer layer of used fertiliser bags bound with string covered them from head to toe. This waterproofing gear offered little protection from the shivering cold. The inexperienced sometimes dared to turn up in yellow sou’westers. They were the object of derision, eliciting cries of, “ere, Mister, have you lost yer Trawler?”

All of us stuffed old newspapers underneath our clothing in a desperate attempt to stay warm, risking papiermaché solidity. Those that weighed our nets of picked sprouts we knew by the words printed on their unchanging attire rather than by their real names. There was Ole man Fison and Mister Potash, not to mention the shrill and domineering Mrs NPK.

And we toiled. For a 28 pound net, you might make sixpence or a shilling in those last pre-decimal days.  I was always a poor picker, my nets underweight, with too much variation in size. And I was just too bloody slow. City boy, pah! When we left the fields for school, we were cold, dirty and hungry. The first stop was the shop opposite the school, where we spent our meagre earnings on chocolate bars and crisps.

Once the final harvest finished, the only thing left for the crows and pigeons were bare stalks. They were dug in as a natural fertiliser or else cut down for excellent kindling. Few homes had central heating then.

I didn’t know then that I was witnessing the final passing away of an era, gone almost overnight. As commuting to work started in earnest down the new A1 motorway to London, so the demand for housing increased and property prices spiralled. Potton quickly lost its interstitial fields to modern infill housing.

With that went most of the alleyways, hedgerows and country paths as Potton morphed into a dormitory town. They bulldozed my beloved junior school for more housing. The local shopkeepers lost out to the horrors of Tesco. That local accent is now history. Something firmly estuarial has replaced it.

Mechanisation and supermarket power meant a need for larger fields and less labour, so production went elsewhere, some of it to Lincolnshire.  The decline in eating local, seasonal vegetables was also disastrous and the season is now just those few weeks at Christmas. The Brussels sprout was once Bedfordshire’s finest product, but now market gardening concentrates on higher-value stuff. The smell of coriander has replaced the odour of sprouts.

But I still love Brussels sprouts. At Christmas, I insist on preparing them. This job is a ritual of great importance to me, scrubbing off yellowed outer leaves in cold water, carving useless little crosses in their bases. I bemoan their demise to anyone prepared to listen.

It’s then that I remember those times most fondly.

More of my personal memories can be found here.