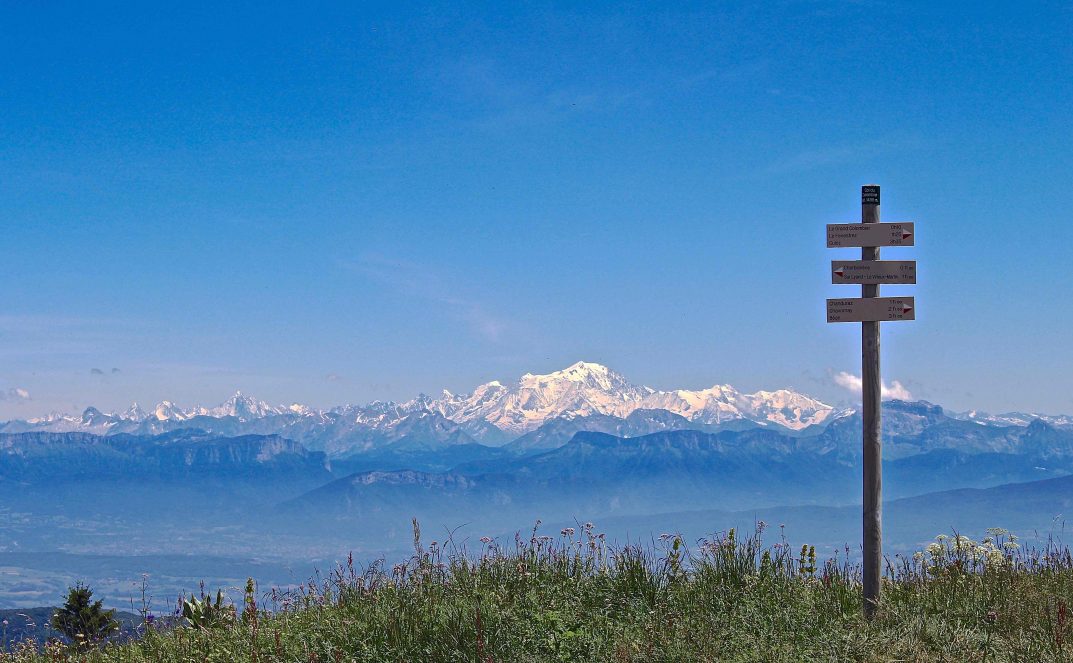 Bugey on down – explorations in undiscovered France

In France, the little known wine region of Bugey is well off the beaten track. I have passed through it frequently, usually on the way to more famous wine destinations in France and Italy. When I finally stopped to explore it some years ago, I wished I had done so sooner. An extended return visit then got this place under my skin.

Once part of Eastern Burgundy, Bugey is in the l’Ain department of France. It usually appears as little more than a footnote in wine books, coming under one of its neighbours; either the Jura region to the North or Savoie to the East. Indeed, this wine region only finally achieved Appellation Contrôlée status in 2009. That was a long time coming, so they got two: Bugey and Rousette du Bugey. More of which anon. 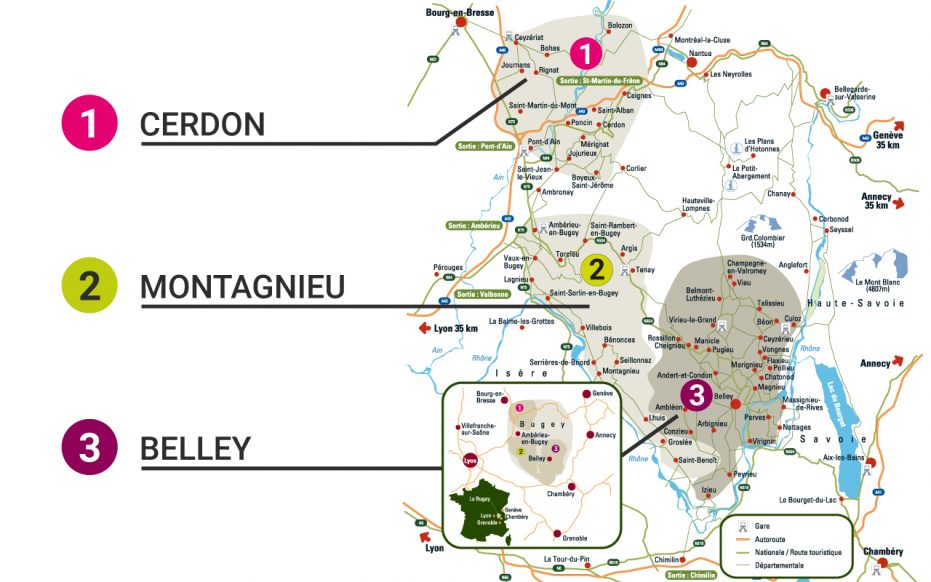 Meanwhile, the largest town is Ambérieu-en-Bugey, at the transport crossroads linking the likes of Lyon, Bourg-en-Bresse, Mâcon, Dijon, Besançon, Geneva, Chambéry and Turin. The river Rhône also passes nearby, on the way down south from Geneva, and a large loop defines the southern boundary of Bugey. Bugey’s highest point is the legendary Grand Colombier (of Tour-de-France climbing fame), at 1,534 metres, from which there are breathtaking views of Mont Blanc (as in the photograph above). 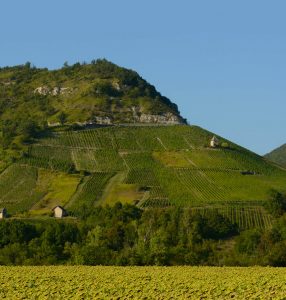 Before the devastations of Phylloxera and two World Wars, Bugey had 7,000 hectares of vines planted. Today, Bugey is a much slimmer 470 hectares, consisting of small vineyards scattered widely over a large area amongst 68 villages. Bugey has three subzones: Cerdon, Montagnieu and Belley. In some cases, those subzones can appear on the label if appropriate.

Winegrowing here is often by families that rely on cellar door sales, with a few larger producers. Some families band together as tiny co-operatives, though there are no traditional large cooperatives in the region. The Bugey syndicate has 80 winemakers and 55 growers. Hence, overall production is just four million bottles per year, so consumption remains primarily local, with only 10% exported. It may be small, but there are ambitious winegrowers in Bugey. 30% of the vineyard area is now organically or biodynamically farmed, which is a fantastic achievement.

Bugey is at the confluence of Burgundy, Jura and Savoie. Hence there’s a collision of eleven cool-climate grape varieties suited to the various terroirs here. Naturally, there are significant differences in soils, altitudes, aspects, and slopes, as you would expect from a sub-alpine region. Meanwhile, in this rugged terrain, vineyard work can be arduous indeed.

In white, Burgundy has contributed Chardonnay and Aligoté.  Altesse (here called Rousette), Jacquère, Mondeuse Blanche and Molette are the varieties inherited from Savoie. Look harder, and you’ll find Viognier and Rousanne from further down the Rhône. There’s also a little Pinot Gris and Pinot Blanc.  In some of the oldest vineyards, there are still examples of these different white varieties co-planted together.

Now the reds. Gamay came from Beaujolais to replant vineyards after World War One, Pinot Noir hints at an older Burgundian legacy, and Mondeuse Noir hails from Savoie. Finally, Poulsard from the Jura puts in an appearance in Cerdon.

AC Rousette du Bugey is the easiest appellation to remember: it must be 100% Altesse (Rousette) and is always a dry white wine. In addition, a geographical location (or Cru) appears if made at either Virieu-le-Grand or Montagnieu.

Bugey AC wines are a little more complicated, as they come in white, red, and rosé and both still and sparkling forms. In some cases, labels can show a Cru location, such as Cerdon or Manicle. However, the appellation has simplified the original rules of 2009, slowly creating an authentic Bugey identity.

In production, 48% is now rosé, with 14% red and 38% white. Bubbles are a regional speciality, too, with more than 60% of the wines being sparkling. Thes largest single category by far is Bugey-Cerdon, which, as we will see, makes an unusual sparkling rosé that now accounts for almost half of Bugey’s total production. Nonetheless, Bugey has plenty of diversity, and there’s a wine for every occasion.

Let’s take the still wines first, which are dry. Bugey blanc must have at least 50% Chardonnay. In addition, the category includes a Cru, 100% Chardonnay from Manicle. These wines will develop further complexity if kept, especially if oak-aged, just like a white Burgundy.

Bugey rosé must contain 50% of either Pinot Noir, Gamay, or both. Mondeuse, Pinot Gris and Poulsard are allowed to make up the rest.

Three rouge wines are made as single varietals and labelled as such; there is no blending allowed. These three are Bugey Gamay, Bugey Pinot Noir (which can say Manicle if from that Cru) and Bugey Mondeuse (which may add Montagnieu if from that Cru).  There are oaked and unoaked versions.

Now for the bubbles. Bugey-Cerdon is rosé and made by the Méthod Ancestrale. It’s either 100% Gamay or a blend of Gamay and Poulsard. Usually almost ruby-red, low alcohol (just 8%) and demi-sec in style, and best drunk young.

Bugey Brut (dry) sparkling wines are usually Méthod Traditionelle, come in white or rosé form, with a minimum of nine months on the lees. However, there is now a great deal of leeway with white sparkling Bugey Brut. It can be a single varietal such as Chardonnay or incorporate Pinot Noir vinified white, Jacquère, Altesse and Molette. The Cru name Montagnieu appears if made in that area, and the Cru must have a minimum of 12 months on the lees.

Lastly, Sparkling Bugey rosé has the same rules as the still rosé above, with a minimum of nine months on the lees. Sparkling wines can also come in lightly sparkling (pétillant) and full sparkling (mousseux) forms. 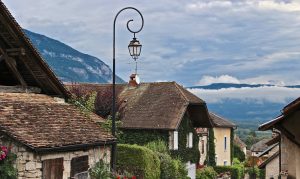 Naturally, the local wines also make an ideal match for the regional cuisine, and there’s nothing more local than Quenelle Sauce Nantua, which has its own Confrérie. In addition, there are regional cheeses, local meats and freshwater fish.  The famous French gourmet, Brillat-Savarin, was born and lived in Belley and has that gorgeous cheese named after him.

Activity-wise, it’s an ideal place for walking or cycling and of course in winter, it’s not far from the Ski resorts either. 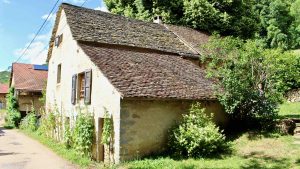 Then there is the historical identity of the region. Many villages still have a central baking oven from past times when each community had to be self-sufficient, especially in the depths of winter. Each one holds a fete in summer when these ovens are celebrated and pressed back into service. Of course, there are plenty of wine-cellar open days in summer too.

In the picturesque village of Cleyzieu, I found a huge wooden cross on the road outside the sturdy ancient house where I was staying. It shows where the plague got to in the seventeenth century. The occupants of the house had been the last to succumb.

Tourism-wise, there’s plenty to do and see. So whether you decide to take a holiday in the region, make an overnight stop or visit for a weekend, Bugey comes highly recommended!

I’ve picked five examples from the styles available, with representative producers, but of course, there are many more good Bugey cellars to discover.

Famille Peillot has 6.5 ha at Montagnieu. Franck Peillot produces this super-fresh, lemony and stony Altesse. It sees no oak and will develop lime and quince complexity if kept for a couple of years. It’s a classic example, a brilliant pairing with freshwater lake fish. Cheeses too: Brillat-Savarin, younger Comté and Morbier all shine. 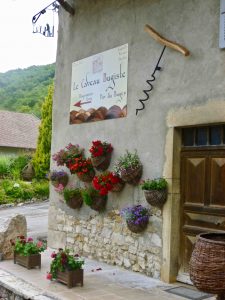 Le Caveau Bugiste is a small “co-operative” of six producers and 45 hectares in the villages of Vongnes. There’s an extensive wine range here, but the Chardonnay Vielles Vignes is my pick. 10% gets some oak maturation. The result is pale gold, with buttery vanilla and almond flavours. It gives many a white Burgundy a run for its money, yet it’s less than €10 cellar door. Versatile: Bresse chicken, freshwater fish, asparagus and older Comté and Morbier cheeses would be local specialities.

Bernard Rondeau at Boyeux-Saint-Jérôme adds 20% Poulsard to the Gamay for a more tannic structure. Deep pink/light red colour, a vibrant strawberry and raspberry aroma and flavour, a little black pepper, a lot of bubbly vif. Available in the UK for £13.51 at Vinatis.

Organic producer Alain et Élie Renardat-Fache have 12.5 ha at Merignat and make theirs with even more Poulsard for complexity, this time in a pétillant style. That’s £17.99 at Raeburn Fine Wine.

Bugey-Cerdon is brilliant with sweet and sour Chinese dishes. Blue cheese, perhaps Bleu de Gex or Bleu de Bresse. Desserts? Shortbread and light pastries, even chocolate mousse. I’ve said it before, but Beaujolais could help themselves by incorporating this style of fizz into their appellation!

Louis Terral at Merignat makes still wines rather than Bugey-Cerdon sparklers from his 2.5 ha of Gamay and Chardonnay. The domaine is Demeter certified biodynamic. His cuvée Vera is from old Gamay vines made in a traditional Beaujolais style and given six months maturation in old oak, with no added sulphur. The result is pure, nuanced and delicate. One for “natural” wine lovers and a humble Vin de France too. Wright’s Food Emporium, £24.00

If I could choose only one producer, it would be Jean-Christophe Pellerin. He has 5 ha at Saint-Sorlin and is Demeter-certified biodynamic. Pellerin grows Aligoté, Chardonnay, Rousanne, Viognier and Altesse in white, with Pinot Noir, Gamay and Mondeuse in red. There are a dozen different excellent wines, including fizz, with around 25,000 bottles per year. These are low-sulphur wines too, and the results are extraordinary. The Mondeuse is dark, brooding, and spicy may be light in alcohol, but there’s power here to match the biggest meat feasts.

If you’re searching for value wines of high quality, my advice is to spend some time in Bugey. Don’t just pass through, as I did for too long. Instead, enjoy all Bugey offers pure air, unspoilt scenery, lakes and rivers, extensive woodlands and spectacular mountain views, pretty villages, local cuisine. A profound silence yet a warm welcome. And some terrific wines. I always look forward to returning for more.

Notes: This article is from articles previously consigned to the archives when replacing the previous Wine Alchemy website in 2016. Some of those articles deserve a better fate. So this one has been given a wash and brush-up, with new material and photos added. Think of it as a digital remaster, remixed and rereleased from my extensive back-catalogue of scribbles and notes, with extra tracks.

And if you’re intrigued by French Alpine wines, try Savoie too.