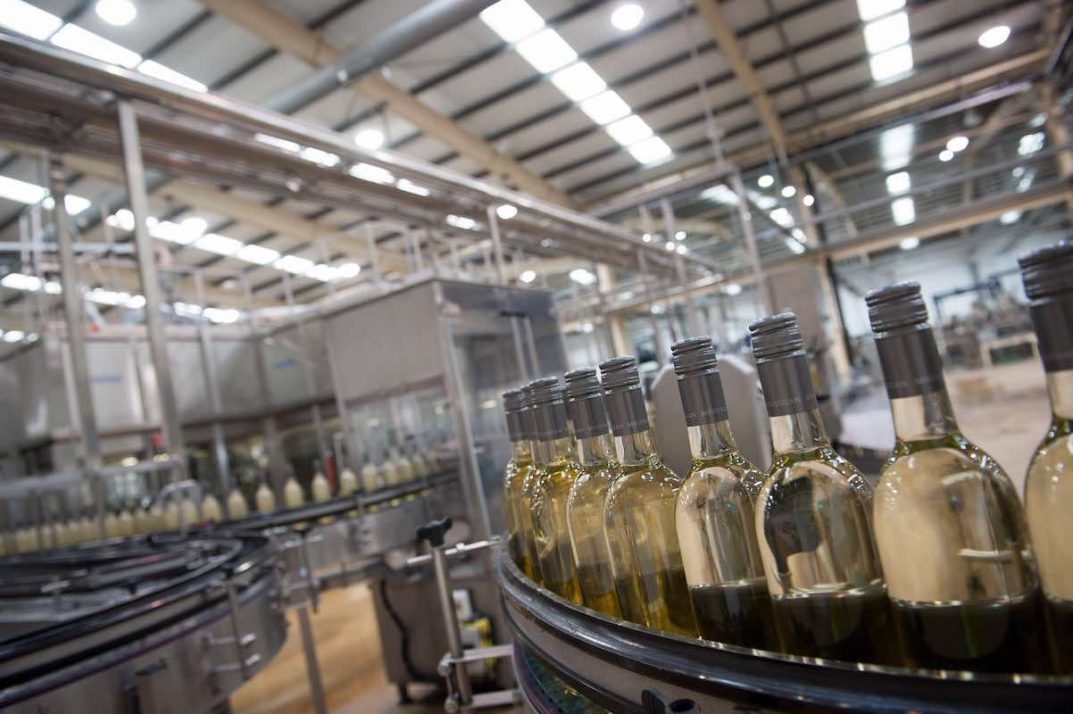 Bulk – what’s in a name? The word derives from Old Norse, where the phrase bulki meant both a cargo and a ship’s hold. The modern meaning has become broader. On the one hand, it describes a large commodity, stored loose and unpackaged. Think bulk buying, bulk cargo, bulk carrier, bulk shipment, bulk discount. But it’s also a word that has disparaging connotations from the association with coal, crude oil and toxic chemicals: unwieldy, clumsy, dirty, low quality, raw, and cheap. The phrase bulk doesn’t sound positive when attached to a wholesome beverage like wine.

Yet, the past few years have seen a revolution in the growth of bulk wines, unnoticed by most wine drinkers. It has a significant impact on reducing the costs of getting wine to market and, in turn, consequences for range, branding and availability. It’s also increasing wine sustainability by reducing the greenhouse gas emissions of transport and packaging. Here in the UK, it has presented new opportunities for British-made glass wine bottles and sustainability.

Bulk wine was once commonplace, back when the wine trade was primarily European and relied on sea, canals or railways. All the great wines from Port, Sherry, Bordeaux and Burgundy came to Britain unbottled in merchant ships. Casks were bottled in Britain, close to the port or point-of-sale. For example, Château Margaux’s bulk shipments to Britain only ended in 1948.

However, bottling at source gathered momentum from the sixties onwards. The top European estates started bottling to counter wine adulteration and extend control over their prestigious brands. Despite being a considerable capital investment unused for 95% of the year, a producer bottling line became a badge of quality and wealth. The invention of mobile bottling lines then enabled even small wineries to join in.

Hence, if we ever pause to think about it, we usually imagine that wines are naturally bottled at source and associate this with better quality. Labels and corks proudly proclaim “Estate Bottled” or “Mis en Bouteille au Château“.

And swings back again.

Though the amount of bulk wine produced declined sharply in Europe and mostly continues to do so, other global wine trends have enabled bulk wines to thrive again. European wines suddenly encountered competition from “new world” wineries gobbling up their market share. Wine rapidly became a global market with wines from California, Australia, New Zealand, South Africa, Chile, and Argentina. All of these are now a familiar sight in Britain. Hence reducing long-distance transportation costs (and subsequently, the need to reduce carbon emissions) became a critical competitive factor. For these countries, shipping in bulk rather than in the bottle can offer a compelling solution.

Today, the USA exports 57% of its wine in bulk, mainly from California. Other “new world” wine countries are similar, with their bulk wine exports at 40-50%†.  Conversely, the reverse is often true in Europe, where bulk wine exports from the top wine-producing countries have declined. A notable exception is Spain, which exports 55% of its wine in bulk – no wonder Spanish wine can offer such value.

The advantages of bulk are not hard to see. A standard shipping container holds 12-13,000 bottles of wine, packed in cardboard boxes on pallets. Alternatively, bulk Flexitanks and ISOtanks can carry the equivalent of up to 32,000 bottles of wine in the same space. That’s about 2.5 times as much wine per trip, with massive savings in transport costs and carbon emissions, especially when sent by water.

Deep-sea freight by ship to markets such as the UK produces massively lower greenhouse gas emissions than equivalent transport by air, railway or road. Using a container ship emits just 0.02 Kg of CO2 per kilometre travelled. In comparison, rail is 33% higher than that at 0.028 Kg. However, a diesel HGV truck is 0.455 Kg (23 times as much as a container ship), and air freight emits a shocking 1.232 Kg (62 times as much)‡.

In short, it’s not the distance wine travels to market that matters; it’s the method used that makes the difference throughout the journey. Scientific studies show that bulk wine reduces CO2 and associated transportation costs by 40-50%*. There’s further potential for future reductions when electric, hydrogen or biomethane powered vehicles come on stream.

Bulk wine in the UK – quantity and quality

The UK is the second-largest importer of wine globally, and the growth of bulk wine bottling in the UK is a mostly hidden story. Britain imported 1.4 billion litres of wine in 2019, with 40% as bulk wine. In the decade 2010-19, British bulk wine imports grew by 50%, to 515 million litres. During the same period, bottled wine imports fell by 20%.

Meanwhile, supermarkets have capitalised on lower-cost bulk wines to increase their margins and market share. Initially, the destiny of bulk wine was for the cheapest and lowest quality supermarket lines. However, bulk wine has become ever more “premiumised” by brands, own-label and private label. These are wines made for supermarkets, independent retail groups, restaurants and pub chains. Besides, bottling closer to the point of sale brings more retail flexibility to respond to seasonal trends, helps retailers with stockholdings and cash flow, improves delivery efficiency and reduces the risk of transit damage.

The days when bulk wines were only cheap and cheerless are gone. Nor they are oxidised, spoiled, or contaminated either. Quality is consistently high, and you can no longer distinguish between bulk and bottled wine by taste. Instead, there are plenty of “award-winning” bulk wines as proof.

The limits on bulk wine are more likely to be an initial availability in large enough volumes plus the ability to sell it in the chosen market. The UK is a crowded wine marketplace with low margins and high taxation. £6.00 stubbornly remains the average bottle price, and sales turnover needs to be rapid. Above £10.00, sales volume and speed diminish quickly, restricting bulk wine’s ability to compete at high price points.

The role of glass wine bottles in bulk wine

Bulk wine is an opportunity for British made glass wine bottles to be used by UK bottlers. While some bulk wine is for alternative minority formats, glass wine bottles still offer many natural advantages, markedly so when using lightweight bottles made from recycled glass. Rather than repeat these facts, a previous article on glass wine bottles provides the details. Their carbon footprint reduces further because these bottles only travel relatively short distances to the end customer.
Because of bulk wine growth, the UK wine bottling industry’s capacity has expanded from its roots in beer and spirits. With colossal scale, speed, and agility, they can offer quality assurance levels beyond many individual wine estates’ reach. They also add to the wine value proposition through logistics (bonded warehousing, packaging, labelling, and onward delivery). Typically, there are partnerships with brand owners, whether producers or retailers. However, these bottlers are, quite deliberately, not household names and sometimes merely a code printed on a back label**. 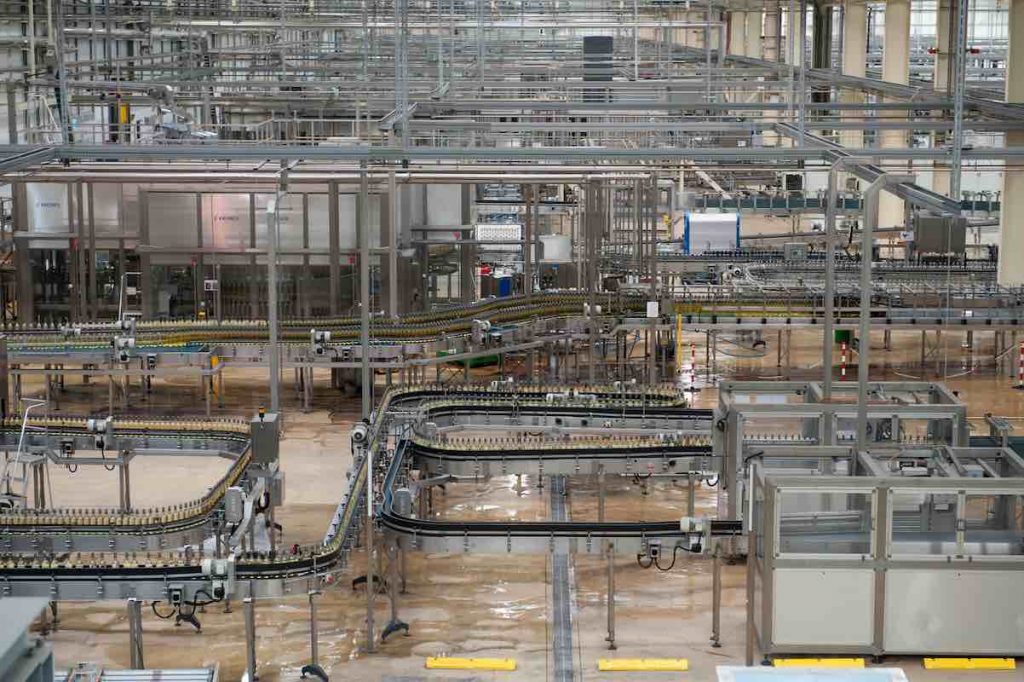 Some of the largest UK wine bottlers include Encirc, Kingsland Drinks, Accolade Wines, and Greencroft Bottling.  While not the only ones, these operate on a breathtaking scale and have also taken enormous strides in business sustainabilty. Some examples below briefly illustrate this.

Encirc has its roots in glass bottle manufacture. The UK site at Elton in Cheshire has the world’s largest container glass furnace. There’s also a railhead to bring in raw materials for manufacture. In 2006 they expanded this business into bottling wine and beer on the same site. This vertical integration evolved into the proposition now known as Encirc360. In short, as well as making the glass bottles, they also fill them with wine and distribute them to stores. It’s a one-stop supply chain solution.

Encirc is the only British glass manufacturer to offer bottling and distribution and claim they have the lowest carbon route to market in the wine industry. In 2019, Encirc estimated that this reduced CO2 emissions by 35,000 tonnes.

Based on the Manchester Ship Canal, Kingsland can take bulk wine straight off the ship. They are one of the biggest in the UK and work with producers include the gigantic E & J Gallo from California. They supply Tesco, Morrisons, Aldi and Ocado as well as exclusive labels for independents. It means Kingsland provide one in every eight bottles of wine consumed in the UK!

Accolade Wines is the fifth largest wine company in the world, with its roots in Australia. Their powerful range of brands includes Hardy’s and Banrock Station (Australia), Echo Falls (California), and Kumala (South Africa). They also work with Sainsbury’s and Morrisons. Their new £100m facilities are the largest in Europe, near Avonmouth in Bristol. They are carbon neutral, too, using 100% renewable energy from wind turbines.

Situated in County Durham, near Teesport, their capacity is 200 million litres per year, and they plan to double this. Power comes from wind turbines and solar panels. Customers include Waitrose.

More and more wines imported into the UK are of bulk origin and bottled here. This trend is likely to continue, driven by a focus on cost, efficiency and sustainability. Bulk wine presents an opportunity to use British made glass wine bottles. The result is more sustainable glass usage and much lower emissions, with significant UK employment too.

Bulk wine brings the opportunity to use British made glass wine bottles optimally and wisely. It used to be all about saving money. Now it’s about saving the planet too.

†Figures for 2010-2019, Wine By Numbers, May 2020. Volumes show the scale of change. Categories are Bulk vs Bottle, excluding Sparkling wines.