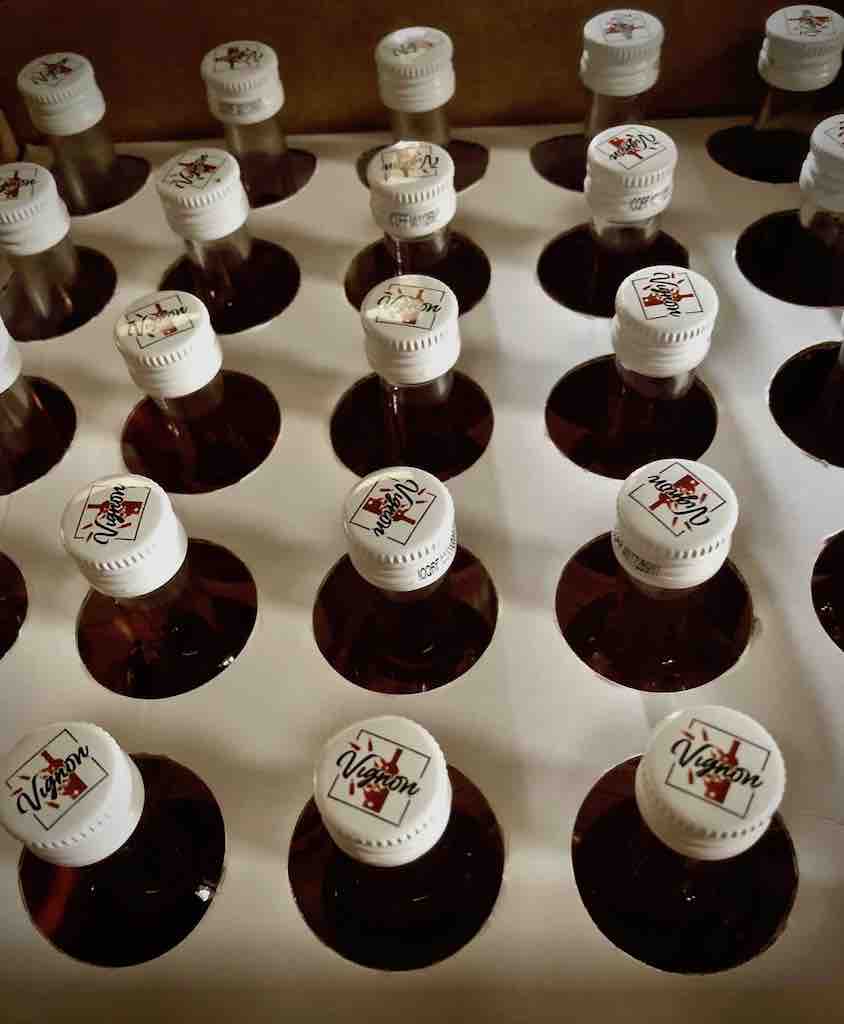 Chiaretto di Bardolino is a crisp, dry and pale-pink wine made in the Bardolino DOC on the Venetian shore of Lake Garda. The Italians never refer to this wine as a Rosato or Rosé, though that’s what it is. Instead, it’s always known as Chiaretto, meaning “the little light one”.

Lake Garda is to Italy what Provence is to France – representing the best rosé of each country. Indeed, while the grape varieties in each place are different, they share similarities as both are delicately and fashionably pink and come in a refreshingly dry style. Recently, I discovered from the Consorzio* that this isn’t coincidental. Under the Roman Empire, Bardolino was part of “Cisalpine Gaul”, while Provence was part of “Transalpine Gaul”. Both made light pale pink wines called “Clarum”. 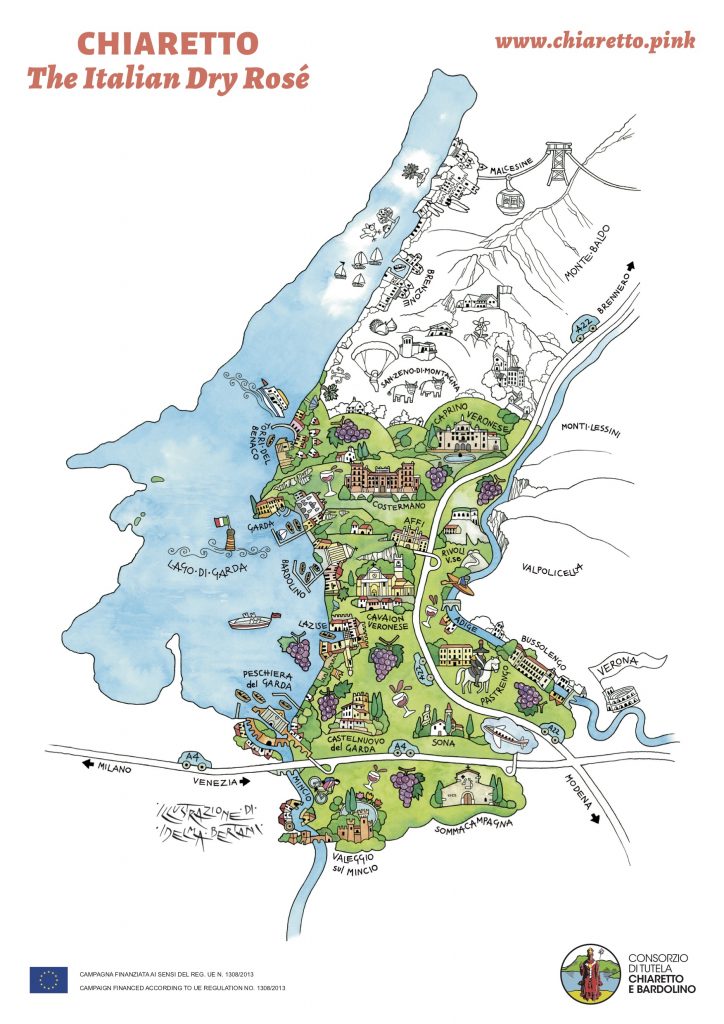 Sandwiched between the eastern shores of Lake Garda and the River Adige, Bardolino DOC covers 2,635 hectares. 1,000 ha of this is for Chiaretto, where 100 wineries make 10 million bottles each year.

Lake Garda is western Europe’s largest lake and moderates climatic extremes, so despite being at the foothills of the alps, it has a Mediterranean climate freshened by winds and breezes.

The scenic lakeshore of Garda is, in regular times, a honeytrap for tourism, with some 14 million visitors each year. Hence Chiaretto is hugely popular in local shops, bars and restaurants.

Nevertheless, with increasing global demand for rosé, production is up, with 60% exported. Germany is the primary destination, though France, UK and Scandinavia take their share.

Chiaretto has a new name.

Bardolino DOC dates from 1968. It includes the Bardolino reds (about 60% of production) and Chiaretto pinks (about 40%). There are no DOC white wines.

The big news is that the DOC rules are newly revised from April 2021 and can apply to the latest 2020 vintage. You might say that with these changes, the Consorzio is raising the Bar-dolino.

One revision is that Chiaretto’s name has changed. What was formerly “Bardolino Chiaretto” has now become “Chiaretto di Bardolino”. It helps distinguish it from two other Italian wines referred to as Chiaretto (the tiny Chiaretto found in Monferrato, Piemonte and the nearby Chiaretto from the eastern, Lombardian side of Lake Garda, in what is known as Valtènesi).

There is a small enclave around Bardolino that retains the right to use the description “Classico”, denoting the original production area. However, the production rules are the same, whether Classico or not. 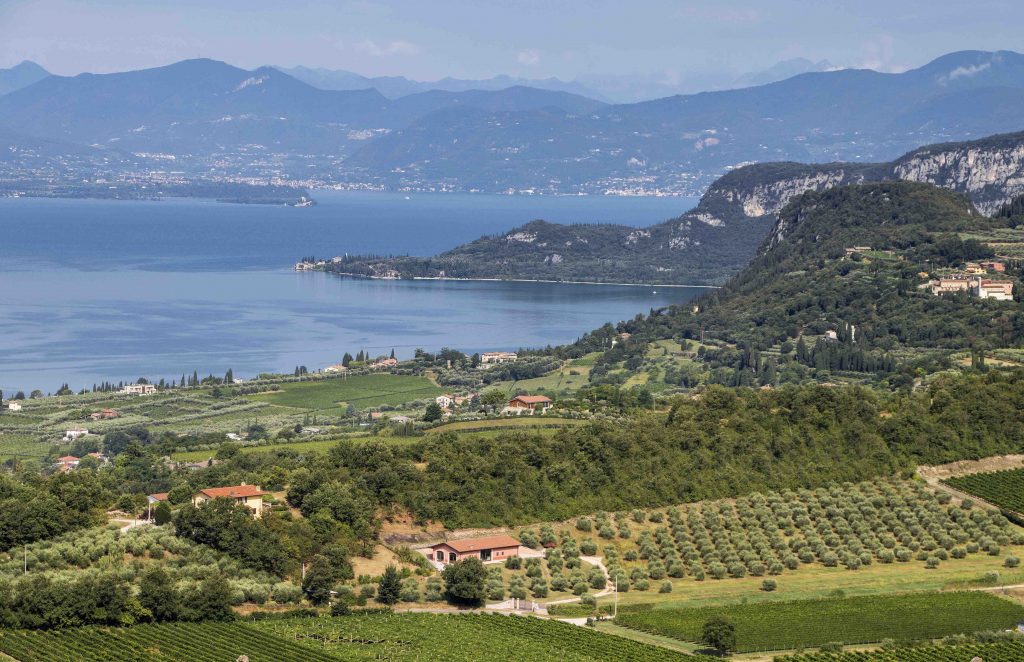 In addition, several other red grape varieties can be optionally included, for example, Molinara, Merlot and Sangiovese. However, these are now more restricted, as their allowable amounts reduce from 0-35% to 0-20%. Within this, the maximum for Molinara is 15%, and the most for “other” is 10%.

Corvina, Rondinella and Molinara are all local native varieties and will be familiar as those making the famous Valpolicella and Amarone just across the River Adige.

These rules seem complex, but the idea is to increase quality and typicity by focusing on paler wines and increasing aromatics from Corvina while still leaving scope for self-expression and existing vine holdings.

The majority of Chiaretto comes as a still wine, though there are now 25 producers making 300,000 bottles of sparkling. In past times, the still wine was made by bleeding off pink juice in the early stages of red winemaking, concentrating the red wine and leaving the Chiaretto as a by-product. But the resultant pink wine could lack acidity, aroma and colour consistency.

These days, some winegrowers choose vineyards according to their suitability for either Chiaretto or Bardolino red. The grapes selected for Chiaretto are picked earlier and undergo white winemaking. Only a few hours of skin contact are necessary within the winepress to achieve the desired pale colour with minimal tannins. Fermentation and maturation are usually in temperature-controlled stainless steel, followed by a few months on the lees.

The colour of Chiaretto is also what sets it apart. In short, it can be all the colours of Flamingo, from almost water white to a mid-pink, with copper and orange shades too. If the first duty of Chiaretto is to taste good, a close second is to be pretty.

Chiaretto is always dry as the maximum residual sugar allowed is nine g/l. Because the minimum acidity is five g/l as well, plenty of examples are bone-dry. The minimum alcohol is 10.5%, though, in practice, 12-12.5% is usual.

The aroma and flavour profile includes citrus fruits (mandarin, tangerine, lemon-lime, grapefruit), red berries (raspberry, currant, strawberry) or flowers such as violets. In addition, there can be pomegranate, apricot, apples and saffron. One common hallmark should be a more-ish salinity.

Most Chiaretto is best when young and vibrant, in the year after the vintage. It will keep for a year or two longer until the fresh fruit aroma and flavours begin to fade.

Versatility is the watchword here, so although it’s often thought of as a summer drink, it’s enjoyable all year round. It’s an ideal aperitivo or as a partner for antipasti. Or try it with salads, omelettes, pasta, pizza and freshwater fish. Sushi/Sashimi is a memorable match. Cheese is another option, where there’s a particular affinity with the local Monte Veronese.

It’s customary that many Consorzio’s hold an annual “Anteprima” to showcase their new wines. An anteprima is a preview event of the latest releases, a first look, a snapshot. This year, the Chiaretto Anteprima was a virtual event for the first time. So it was an honour to be involved in a home tasting of 50 samples of still wine. Each 50 ml sample came in a numbered  Vignon® mini-bottle sealed under inert gas with a screwcap, a clever arrangement.

These wines were predominantly from the latest 2020 vintage, though there were two from 2019 and one from 2018. The 2020 conditions produced a regular growing year, without the heat spikes and drought of 2019 or the chills of 2018.

All 50 wines were moderately chilled and shown in flights of five, blind-tasted under competition conditions. Consequently, there was no prior knowledge of the wine or producer until afterwards. Rather than publish notes on all 50, a personal Top Picks selection appears below. Five of these are available in the UK. A further five are not, a situation which I hope will change.  The prices given below are for the previous 2019 vintage; expect the 2020 vintage to appear soon.

Sixteen hours on the skins for colour, with a low sulphur regime using stainless steel. A delicious light-pink Chiaretto, with delicate aromas of roses followed by a palate of redcurrant and raspberry and a smidge less alcohol. A long fresh saline finish tempts you back for more. A satisfying “old school” blend of 40% Corvina, 40% Rondinella and 20% old-vine Molinara. £11.95 at Le Bon Vin and Drinks and Co

Trust this cooperative to feature in the top picks, even though this is only their second vintage. Rocca Sveva grapes come from 30 members of the co-op and get 8-12 hours of skin contact made in stainless steel from Corvina/Corvinone and Rondinella (ratio unknown). Salmon-pink colour, aromas are of citrus with a hint of violets. A softer texture on the palate, with raspberry and pomegranate fruit. Long saline finish with grapefruit pith. Drinks and Co, £12.20

An organic example, being 80% Corvina and 20% Rondinella, given eight hours of skin contact, made and matured in stainless steel. Extremely pale and lighter-bodied. Aromas of red fruits with an intriguing eucalyptus note. The palate has mandarin and redcurrant with a slightly salty edge.  Vini Veniti, £9.50

The 2020 wines shown from Il Pignetto, Costadoro, Le Fraghe, and Marchesini Marcello and Zeni were also highlights. Those wines are unfortunately not currently available in the UK.

These top picks are provisional. The wines will continue to improve over the next few months and might score differently then. Also, some Chiaretto di Bardolino producers were not present in the line-up, presumably as their wines were not yet ready. Inevitably, the anteprima came too early for a couple of examples  – those containing bubbles may bring a welcome spritz, but lingering fermentation aromas are unattractive. And while grapefruit is a recognisable citrus component of this wine style, it felt too dominant in some examples. Maybe that is down to the chosen cultured yeast employed or just extreme youth, and perhaps this trait will become less noticeable when the bottles reach the marketplace.

A few examples were more strongly coloured and softer styled, and looking back, this correlated with the inclusion of Merlot. While those wines are valid expressions, I’ve discovered a personal preference for those made with Corvina, Rondinella and Molinara. Your mileage may vary.

Overall, however, the quality was excellent, and there were no faulty samples. It’s a tribute to the producers and the careful arrangements made by the Consorzio.

Chiaretto may be pink, but don’t dismiss it as frivolous. The prices are highly competitive for the quality offered. As with any rosé, when buying, beware of lightstrike. These wines often come in clear glass to show off their colour, which doesn’t protect them from ultra-violet damage.

Summer is coming, and while Chiaretto di Bardolino is enjoyable anytime, anywhere, nothing beats taking a glass or two outside on a warm evening. Preferably there would also be a romantic sunset over Lake Garda – but that would be beyond the pale.

**As in Valpolicella, Corvinone is often found planted with Corvina. Hence Corvinone can represent up to 20% of the Corvina allowance. These varieties were once thought to be the same but are unrelated.

If you want to discover more about Bardolino DOC, please see this article on Le Fraghe.