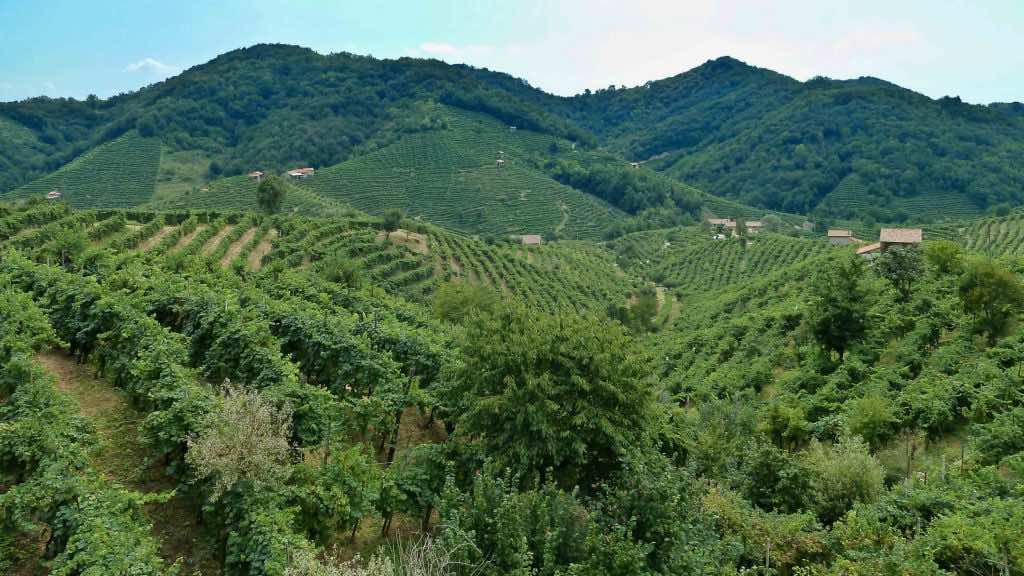 As nearly everyone knows, Prosecco is an Italian success story that’s now an international phenomenon. The total production of all Prosecco is vast and still growing. Most of it comes from the colossal DOC, some 24,000 hectares of vines in Italy’s northeast, namely in the Veneto and Friuli Venezia Giulia regions. The DOC is now making nearly 500 million bottles per year. However, Prosecco also has two relatively small enclaves in the Veneto. Since 2009 these are at the top Superiore DOCG level, enshrining that they were long recognised as the two best places for Prosecco. One of these areas, the smaller Asolo Superiore DOCG, has featured previously.  However, its much larger companion takes its name from the wine towns of Conegliano and Valdobbiadene. Hence Part 1 of this article is about Conegliano Valdobbiadene Prosecco Superiore DOCG.

Part 2 then features ten examples of Prosecco from this DOCG, from the 2019 vintage. They demonstrate the high quality, terroir and increasing stylistic variety of the Prosecco from these parts.

So why this DOCG Superiore?

In the land of Conegliano Valdobbiadene

As the map below indicates, Conegliano Valdobbiadene DOCG is some 60 km from Venice (Venezia).  It’s to the north and east of the River Piave (and the nearby Asolo Superiore DOCG).  The entire region runs between the two wine towns of Conegliano and Valdobbiadene.

This area now has 8,431 ha of vines and makes around 92 million bottles each year.  14% of that ends up in the UK, which is by far the biggest export market. We like it. A lot. But how much do we know about it?

These two main towns get equal billing as gateways to this fascinating and beautiful area. The smaller town of Valdobbiadene is arguably the winemaking centre for the region, while Conegliano acts more like the cultural centre and boasts Italy’s oldest and most prestigious wine academy. Both of them are ideal bases for discovering this land. Diplomatically, the headquarters of the Consorzio for the DOCG lies between the two!

The meandering road between Conegliano and Valdobbiadene also became Italy’s first wine road. This year, the Giro used it for their Stage 14 time trial. Would you please look at the video here to see this cycling classic because it shows off the surrounding countryside?

This area is such a unique and culturally historic landscape that since 2019 it’s become a UNESCO World Heritage Site. That confirms it as one of the world’s outstanding wine landscapes, ideal for tourism, with spectacular scenery, art, and gastronomy. It’s to this land that we now turn.

Harmony of Man and Land 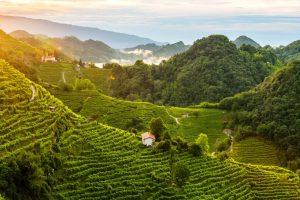 The first thing that strikes you in summer is just how green this place is. There’s every shade that comes from a harmonious combination of vineyards, grass and forests of Chestnut, Ash and Pine.  The second thing is how scenic it is; precipitous slopes everywhere, with precious little flat land. The hill crests and valleys have small hamlets and isolated farmsteads set amidst a chequerboard of vineyards. It’s a result of humans and landscape co-evolving here over millennia.

The geography is a “Hogsback,” a series of rugged slopes and valleys running from east to west. It means that it’s open to the prevailing winds and rain. However, this orientation also gives protection from the cold and frost from the Alps to the north, and it receives warmth from the nearby Adriatic sea. So naturally, the vineyards mostly face south to catch the most sun, while the shady north-facing slopes feature wild forest and pasture.

Though there are several local grape varieties here, the Glera white grape variety now completely dominates the scene and is the mainstay of all Prosecco. The demand for bubbles and the expansion of the vineyards has secured its ascendency above all others.

This entire area naturally falls into two roughly equal-sized parts, one around Conegliano and the other around Valdobbiadene. The River Soligo separates them. Some say that the wines from Conegliano have more body, while those from Valdobbiadene are more aromatic. It’s an explanation that certainly reflects their different terroirs – through many wines are blends that combine the two.

Conegliano is lower (as low as 50 metres above sea level), relatively flatter, drier and warmer. Sixty million years ago, it was a coral reef in a warm sea. Since then, the Alps have pushed upwards, crumpling the rocks into the Hogsback, while the glaciations from the last Ice Age left a cover of free-draining moraines.

In contrast, Valdobbiadene is higher and steeper (with vineyards reaching 500 metres altitude) and colder and wetter. Gradients here can be an astonishing 70% or more, with shallower marl-clay soils overlaying fossil-rich limestone and sandstone.

There’s plenty of rain too, with frequent showers even in summer. Luckily, the steepness of the hillsides and loose soils afford rapid drainage, while constant breezes dry things out quickly. In addition, altitude and clear skies bring diurnal variation, preserving acidity and aroma in the grapes. Meantime, laborious work over centuries has modified these natural gifts – many steep slopes have centuries-old terracing, called ciglione. These are unusual in that they are narrow grassy banks rather than having stone retaining walls. 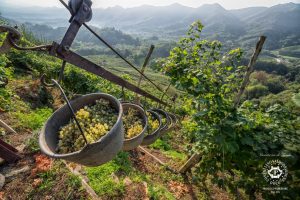 Viticulture is “Heroic” in many parts, which perhaps is not an epithet we readily associate with most Prosecco. It’s exhausting, demanding and challenging work because of the vertiginous slopes. However, in the battle with angle and gravity, vineyard labour and access are mostly without mechanical aid. Two-thirds of all the vineyards have slopes ranging from 15% to 60%, and 20% of the total area is ciglione.

Measurements show that tending these vineyards requires an average of 600 hours of labour per hectare each year, compared to only 150 down on the plain. Moreover, really inaccessible places need 800 hours!

Also, the average size of growers holding is still a tiny 2.5 ha (often split across sites). It’s a remnant from feudal sharecropping and size limited by how much one person or family could realistically work. This means there are still 3,468 growers in the DOCG! Some sell their grapes to cooperatives or large companies; others make their own wine.

During the Late Medieval and Renaissance periods, the might and prosperity of Venetian rule meant a ready market for the wines and a place of summer refuge from the heat and humidity of the city. The wines would have been still (Tranquilo), not sparkling. From about 1800, Sui Lieviti was the sparkling version made. Made in a bottle, it’s cloudy bubbly. However, the modern Charmat/Martinotti method for commercialising sparkling wine production began here in 1868. The growth in demand for bubbles since then has helped preserve this area for posterity.

Perhaps we can speculate that without the bubbles, much of the vineyard area might have been abandoned as uneconomic, particularly in the face of more manageable and cheaper wine sources. But, instead, this landscape, economy and family way of life has survived and latterly thrived and has become the pinnacle of Prosecco quality. No wonder UNESCO awarded it World Heritage status.

The DOCG is also now at capacity regarding vine planting, and expansion is no longer possible. However, the quest for improving quality, environment and prestige continue as a way of adding value. That’s illustrated in the development of a subzone system and the local Consorzio Protocol for sustainable winegrowing. For example, since 2019, there has been a complete ban on using the dangerous suite of weedkillers known as Glyphosates.  This DOCG is now the largest area in Europe to do this. Other regions, take note!

As has been described above, the terroir of this DOCG is far from homogenous. Hence there is a quality pyramid that elevates specific subzones. Thus, while the entire region is Superiore (covering 15 communes), the subzones aim for even higher quality; these are divided into Rive and Cartizze.

Rive (meaning steep slopes) are the recently identified subzones introduced in the DOCG of 2009. There are 43 of them, and most are tiny. Taken together, their total of 353 hectares of vines represents only 4% of the vineyard area. This “cru” concept expresses the individuality of specific and unique local microclimates and soils. These are “single-vineyard” wines, often occupying the most challenging and costly to work sites but in turn capable of the greatest or most individual wine expressions. Each Rive wine must come from its stipulated place, be hand-harvested, have lower permitted yields, and are always vintage-dated.

Meanwhile, Cartizze has long been at the pinnacle of the quality pyramid. It’s only 108 ha, occupying a single hill near Valdobbiadene, divided between a hundred or so growers. It’s the “grand cru,” if you will. Hence, until recently, this place also had the most expensive vineyard land in all of Italy – not that anyone is selling!

Mostly you will see “Conegliano Valdobbiadene Prosecco Superiore DOCG” on the label, as all the spumante (fully sparkling) wines made here qualify as Superiore. That’s 93% of all the wine made. However, other labelling conventions are worth pointing out, the first being that the inclusion of the name Superiore is optional, as is even the word Prosecco!

The still (Tranquilo) and semi-sparkling (Frizzante) wines cannot use the word Superiore, but they only account for 0.2% and 2.3% of production, respectively, niche wines that are not often seen.

Meanwhile, to make the situation more complex, wines that are only from Valdobbiadene can choose to omit the word  “Conegliano”. Conversely, those only from Conegliano don’t need to include “Valdobbiadene”. Meanwhile, the sparkling wines from the Cartizze subzone (1.5% of production) must use the phrase “Superiore di Cartizze.” For Rive, the relevant name of one of the 43 Rive can also be added where appropriate (2.3%). For example, Sui Lievite sparkling is a small but growing sparkling style (about 1%), but while it is a Superiore, it can never be a Rive.

The DOCG decided against authorising the introduction of Rosé wine, for which there is no tradition in these parts. In contrast, the DOC has embraced this recent commercial opportunity enthusiastically. 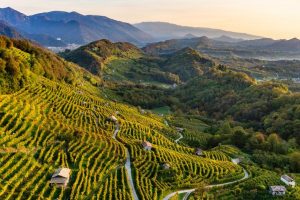 We’ve seen that the still and semi-sparkling wines are rarities and that most wines are spumante. The Charmat/Martinotti process makes the frizzante and spumante sparklers, with different levels of residual sugar and hence different sweetnesses. They comprise the bone-dry Extra Brut, Brut and then the off-dry Extra-Dry to the sweetest Dry wines.

The Extra Brut style is a new addition here, and so is the official recognition of Sui Lieviti wines (aka Col Fondo). There’s more about styles and winemaking in Part 2.

Consider adding this fantastic area to your post-pandemic travelling list. After all, it’s not far from Venice, and as the Venetians know well, it makes a splendid contrast. Until then, why not enjoy a bottle of top quality Prosecco from these parts and taste the difference!

Are you ready for a drink? You can find ten wines that exemplify aspects of this DOCG story in Part 2.

* Thanks to the Consorzio for maps, facts, figures and photography. In these Lockdown times, it was a pleasure to join with their first “Virtual Trip” online in October 2020. Meanwhile, though my first visit to this region was back in 2011, I intend to return as soon as possible.