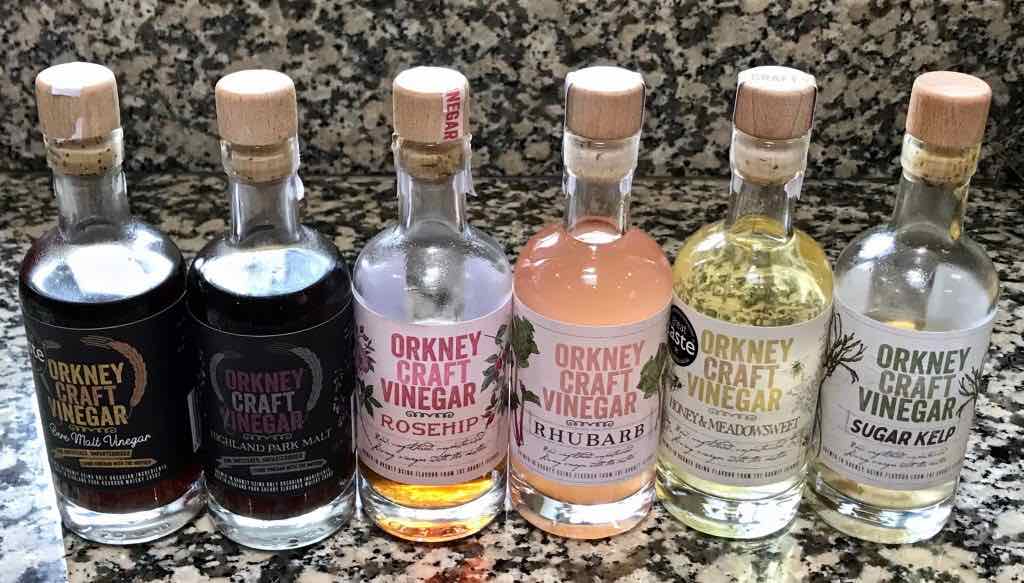 Craft Vinegar from Orkney – Time for an Acid Trip

The renewed appreciation of vinegar is a welcome food trend. It advocates using speciality vinegar, in cooking, as a condiment or even in cocktails. But, unfortunately, so many food trends turn out to be the briefest of over-hyped fads replete with dubious celebrity endorsements and dietary benefits. However, the rise of artisan vinegar is the rediscovery of lost heritage and is all about flavour. Hence this short article is about craft vinegar, small-batch, artisanal raw vinegar, featuring Orkney Craft Vinegar.

It must be Sarson’s Malt Vinegar on chips. Sarson’s have been in business since 1794 and make 15 million bottles each year. There’s one in the cupboard, next to the Brown sauce. However, there’s still plenty of space in there for craft vinegar as well. As an aside, beware of the so-called “non-brewed condiment, ” which cannot be called vinegar by law. It’s merely acetic acid mixed with water, colourings and flavourings. It has no merits.

Artisanal vinegar comes in many guises and with a surprising array of flavours and so is remarkably versatile. Apple Cider vinegar probably initiated the current trend, but there are also many long-standing aficionados of Balsamic and Sherry vinegar.

Now, Chefs and food writers are going on an acid trip. For many of us, it’s a whole new experience.

What is vinegar anyway?

Vinegar is something we mostly take for granted. It’s a mild solution of 5-8% acetic acid in water plus flavourings. We all know its pungent smell (from volatile acidity) and distinctive sour taste.

The action of bacteria of the family Acetobacter makes the acetic acid in Vinegar. They ferment ethanol (or sugar) into acetic acid and water in the presence of oxygen. It’s a natural and widespread microbiological activity but wasn’t understood until Louis Pasteur found that bacteria are essential for the vinegar fermentation process.

Yet vinegar has probably been around for as long as there has been alcohol made. It’s also a mainstay in many different cultures. For example, vinegar was known to Babylonians, Egyptians and Persians, all using it to preserve food. Later, the Ancient Greeks and Romans made vinegar from wine for dressings, sauces and marinades, and medicine and preservation.  Indeed, the Latin word for vinegar is Vinum Acer.  That became Vyn Egre (sour wine) in Old French and hence vinegar in English.

During the Middle Ages, Orléans in France became famous for high-quality vinegar. Meanwhile, in Britain, Malt vinegar brewed from beer was known as alegar. Balsamic vinegar evolved in Modena in Italy, while Sherry vinegar only comes from Jerez in Spain.

Hence there are many different types of vinegar, which all have different tastes depending on the source ingredients. We primarily use vinegar in cooking, but it also has many other industrial and domestic uses. For example, it’s an effective household cleaner – windows sparkle!

Vinegar has many guises.

Industrial-scale vinegar production was first developed in Germany, then in Japan. It enabled rapid volume production for the first time. Such industrial vinegar can be cheaply and consistently made in a couple of days, whereas artisanal vinegar may take months or many years in Balsamic vinegar. Hence over time, cheaper industrial vinegar products replaced many artisanal brews. Unfortunately, that was also frequently at the expense of quality and diversity of flavour.

A wide variety of bases can brew vinegar. Wine is a typical one, in either red or white form, and there’s plenty of wine and unfermented grape juice destined for vinegar.  Grains are another frequent source, ranging from rice wine vinegar to malt vinegar from barley. Fruit wines, ciders, cane sugar and even potatoes can make it. But trust the Americans to permit their vinegar for human consumption to be synthesised from Petroleum!

Just as with wine, beer and cider, the quality of vinegar can vary enormously. Indeed, with craft vinegar, the most crucial ingredient in its creation is the “mother”. The mother is the living batch of acetic acid bacteria and cellulose responsible for creating the vinegar. There are then two other vital ingredients – time and patience!

Pickling, vinaigrettes and salad dressings all rely on vinegar. It’s also necessary for many sauces and chutneys, such as Brown sauce. Vinegar can also bring balancing acidity to many different recipes and foods, both savoury and sweet. Use it whenever you’d employ citrus fruits. Usefully too, it lasts indefinitely and requires no fridge, only a cool dark place.

You can even make vinegar yourself, though many people might find that a step too far.

Fortunately, there are artisanal vinegar makers in Britain, making premium craft vinegar with all kinds of flavours and culinary uses. One excellent example is Orkney Craft Vinegar. This business started up in a garage in the village of Orphir on Orkney in 2017. Their vinegar range is made in a newly expanded facility in Kirkwall, the largest town of the Orkney Islands. Indeed, all the ingredients in their various kinds of vinegar are Orcadian, organic and foraged.

Moreover, these products are living, being unpasteurised and unfiltered. Hence are raw, natural and probiotic. In short, there’s terroir in these bottles!

The business is also sustainable in other ways. For example, there’s no plastic, just recyclable glass, paper and cork in the premium packaging. As a result, Orkney Craft Vinegar is a real success story, winning Great Taste Awards from the Guild of Fine Food in 2018. Along the way, they’ve become a favourite of influential Chefs such as Nick Nairn and James Martin.

Orkney Craft Vinegar make seven different kinds of vinegar. Some are seasonal, and each one has a unique flavour. All are made from scratch; in other words, fermenting the ingredients into alcohol in the forms of wine, mead or beer, then fermenting this potion to make vinegar.

Here are six of them (the seventh, Smoked Dulce, appeared after this article was written). There are also some ideas for using them derived from home experimentation over the last few months. All bottles are 250 ml size  – a few drops are generally all you need – and the prices shown are for direct online sales. In future, it would be great if they were sold together in smaller bottles as a miniset; that would highlight the diversity on offer and be a good starting point for newbies.

The barley used for this malt vinegar is known as Bere. Bere is an ancient Viking cereal, once widely grown in northern Scotland but now virtually unique to Orkney and probably the oldest type still in continuous cultivation. Indeed, the 18th-century Barony Mill is the only mill now grinding Bere barley. The barley is malted, beer is made and then fermented to vinegar. The vinegar then matures in old Bourbon casks sourced from Highland Park. It’s dark brown in colour, malty in taste but softer and more subtle than, say, Sarson’s. It’s less tart, more rounded, with a greater depth of flavour and a hint of sweetness but finishes nicely sour.

Useful with foods that already have big flavours. Make a classic vinaigrette, say for artichokes. Pour a little into finely shredded cooked cabbage for a kind of instant sauerkraut and serve with roast pork or sausages (thanks, James Martin). Adds a savoury kick to non-alcoholic cocktails.   2 stars in the Great Taste Awards. £10.50

Highland Park malt is a partnership with Highland Park whisky, the distillery being about two kilometres away on the other side of Kirkwall. They supply the peated malt barley, plus their old whisky-soaked sherry casks mature this vinegar. There’s a deep brown malt colour, but there’s a definite oloroso savouriness as a kind of bass note, with top notes of heather honey. Powerful and perhaps a little more aggressive than the Bere malt. Roast Lamb benefits from a few drops, or deglaze your roasting pan with it for delicious gravy. Perfect dripped onto Haggis (including vegetarian versions) or black pudding. Add a couple of drops for a superb bacon sandwich.  £10.50

Rosehip is an entirely different expression. Rosa Rugosa hips (which resemble cherry tomatoes) make the base wine. The result ferments in Oloroso Sherry casks from Highland Park for one month. It’s a delightful mid-amber colour. A particularly excellent balance of acidity and sweetness, supported by oloroso sherry notes and hints of rose petals. Much more subtle and delicate flavours here. Perfect for a middle-eastern salad along the lines of Lebanese Fattoush. Alternatively, drizzle some over ice cream. As it uses rosehips, this vinegar is seasonal. £8.50

Fresh Orkney rhubarb ferments into wine and thence into vinegar. A rosé-pink colour, lighter and more lifted than the rosehip, perhaps offering the most delicate flavours here. The rhubarb shows as delicately acidic red fruit with a green vegetable note. How about adding to fruit crumbles, including apple and rhubarb, or add a few drops to fresh strawberries! Another seasonal vinegar. £8.50

A seasonal vinegar; requires the infusion of meadowsweet flowers in a mead made from local Orkney honey. There’s a higher acidity with this vinegar, necessary to balance out the additional sweetness. A light yellow colour, some residual sweetness remains, with a definite floral aroma. Enhances the flavours and cuts the fat in charcuterie, from Salami to Chorizo to Smoked Duck. £8.50

The Sugar Kelp seaweed is from the Brough of Birsay. Light silver-yellow in colour, there’s distinct umami pungency, softened by sweetness and sea-salty mineral qualities. Perhaps this is the most subtle of all the kinds of vinegar here. Very successful when used with a variety of seafood. Whelks and cockles spring to mind, but Sugar Kelp vinegar is excellent with dressed crab and scallops. As for oysters, use this and forget mignonette! Add a drop to your G&T too! £8.50

It’s probably fair to say that the most significant limiting factor with using these kinds of vinegar is imagination and the willingness to experiment. For example, if Balsamic vinegar and Parmesan is an acknowledged classic match, the exploration of craft vinegar and cheeses requires investigation! An article for another day!

Need any ideas and recipes? This award-winning book, called Sour by Mark Diacono, is warmly recommended. So too is The Vinegar Cupboard by Angela Clutton.

Meanwhile, there are more articles about Orkney on this website here.