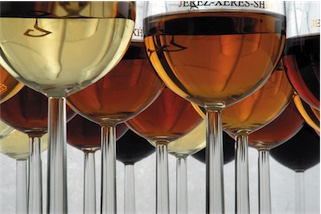 Britain has enjoyed Sherry since the 14th century and was primarily responsible for its popularity around the world through trade. It comes in all sorts of dry and sweet versions. This piece focuses on Discovering Dry Sherry, the Vinos Generosos, Spain’s great gift to the world. Part 1 of this article covers the two styles from which others can be said to be derived: Fino and Oloroso.

From the time of Shakespeare, Sherry became hugely popular and was often known as Sack. However, in late 20th-century Britain, it had become stubbornly unfashionable. A brand image based on cheap, sticky, and sickly sweet wines so beloved by aged Aunt’s (more tea, vicar?) lingered on. How many of us have endured compulsory family visits at Christmas, politely sipping a musty sweet sherry with a plate of fondant fancies? At my Aunt Lil’s, desperation would set in early. Her Aspidistra became discreetly used as a spittoon and indeed, it seemed to thrive on it.

The fashionista tapas bars and restaurants of Barçelona and Madrid have always known better. Dry Sherry is a great wine, ridiculously cheap and, most importantly, it tastes glorious. Now it is becoming fashionable again in Britain, partly due to the emergence of some excellent Tapas bars over here, but also because of recent innovations in marketing. Another plus is that Sherry is always widely available, including in supermarkets.

Sherry must come from a wine region in south-east Spain, near the port of Cádiz. There are three main towns; Sanlúcar de Barrameda, Puerto de Santa Maria, and Jerez de la Frontera. It was Jerez that gave Sherry its name.

Wine regions usually have ideal conditions for grape growing, but arguably Sherry is not one of them. It’s blisteringly hot and dry in summer and few grape varieties are suitable. The Palomino white grape is best suited but it makes a rather neutral dry white wine. The secret of all Sherry is how human ingenuity transforms this simple white wine by giving it a very complex maturation process.

Firstly, the white grapes are fermented out to dryness, creating a base wine of only about 12% alcohol. They are then fortified with pure spirit to around 14.5% and put into wooden casks, known as butts.

However, these casks are only filled to about 85% of capacity, leaving an ample air space above the wine. Under such conditions, a strain of yeast known as flor grows on the surface of the wine. It feeds on nutrients in the wine and in so doing adds unique flavours and protects the wine from oxygen. In spring, those casks that have grown the most flor (which by then is an unattractive foaming scum) are then fortified again to 15%. This new alcohol feeds the flor. Eventually, these casks will become Fino sherry, created by the biological action of yeast.

Fino is always the lightest, most delicate and driest style (usually bone-dry), it is highly aromatic and characterised by salty, apple and almond flavours. Most Fino is between three and seven years old. Fino is best served well-chilled and is brilliant with seafood, grilled fish or gazpacho. There is no better partner for oysters, sardines or mackerel. I like it with asparagus too. It also makes a brilliant apéritif – most wines are destroyed by olives or anchovies, but not these.

An exciting recent addition to the Fino style is known as En Rama. Think of it as “raw sherry”. Pioneered by Barbadillo and Gonzales Byass, most Sherry producers now release this style. It’s as close as possible to a draught sherry in its natural state. These have minimal filtering and clarification so that they can be slightly cloudy but they have more flavour intensity. Annual limited releases have now become anticipated events. It is important to drink these wines within three months, as the lack of filtering leaves some of the flor particles in the wine, meaning that they are less stable wines with only a short shelf-life.

However, some Sherry butts have an entirely different destiny. Instead, they are fortified to a higher 17% alcohol. This strength means that flor cannot grow. The wine in the cask is, therefore, directly in contact with the air and it starts to oxidise slowly. Eventually, oxygen exposure over many years creates Oloroso sherry.

Oloroso is a more alcoholic drink reliant on oxygen to work its magic and needs at least ten years ageing. Over this time, the wine is concentrated through evaporation and becomes golden, richly textured and can easily achieve 20% strength. Indeed, Oloroso is potentially one of the world’s longest-lived wines and can evolve for more than a century. Smelling of Walnut and Brazil nuts, they are powerful dry wines with nuts, figs, dates and raisins present on the palate. You’ll find age-dated releases – not a vintage year but rather an average age, for example at 20 years (VOR), 30 years (VORS) or longer. Serve slightly chilled, roasted meats, hams or mushrooms work well but a glass with a large piece of Manchego cheese hits the spot.

Whether Fino or Oloroso, it’s now time to introduce the new, unfinished wines to a unique technology for ageing and blending invented the nineteenth century – the Solera. The Fino and Oloroso wines are kept apart in separate soleras. It’s easiest to imagine a whole Solera as a collection of connected sherry butts organised into a pyramid, with the casks from each year stacked in rows. The oldest wine is at the bottom of the pile and the youngest at the top. Each year a maximum of 30% of the contents can be drawn off from the oldest wine to sell. That is called the saca, hence Sack.

Once the bottom row (the solera) has had the oldest wine taken out, these are topped up with younger wine from the next oldest wine, in the row above (the criadera). The process repeats for each row. The top row will now have space for adding the new wine (called the añada). The whole process is known as running the scales.

In this way the wines become fractionally blended, the youngest wines slowly taking on the character of their forbears over time while the older wines become refreshed. This process may take from three years to over one hundred years and is why most sherry is non-vintage. Such blending also means that the wines are consistent because any differences between individual barrels tend to be ironed out.

So far we have met Fino and Oloroso. They start out the sam, yet  two completely different styles of wine are created depending on whether they have been aged with flor or exposed to air.