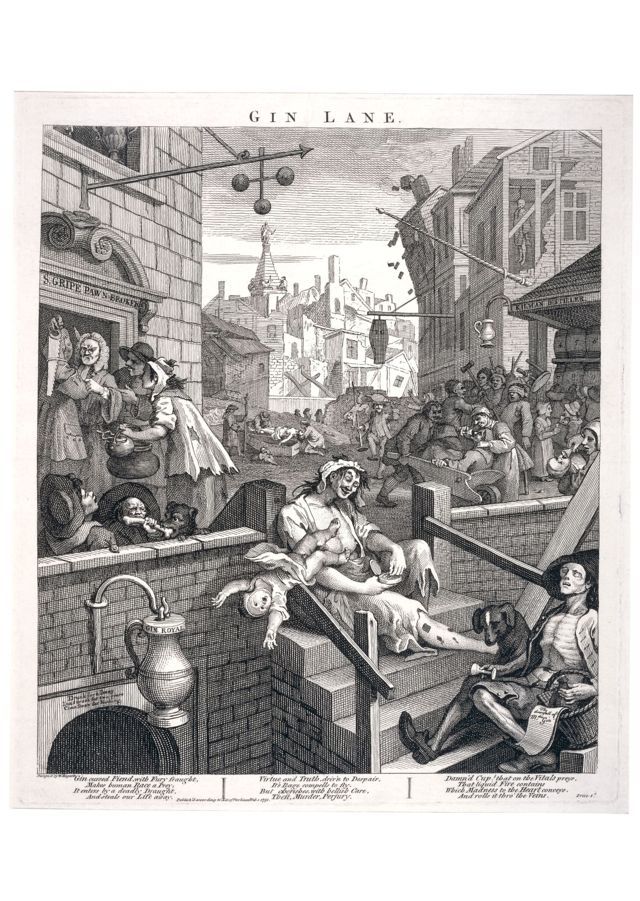 The Premium Gin Renaissance, Part 1 of 2

Gin has a chequered history. No other drink shows such a polarity of style and fashion versus intemperance as Gin. Italian monks were the first to distill wine into a crude spirit. Juniper berries were added to mask the raw taste. Drunk for medicinal purposes, it was even tried as a remedy for the Black Death, though without any success.

The Dutch invented it; the English refined it, but the Americans glamorised it.

In the seventeenth century, the Dutch added juniper plus various herbs and spices (“botanicals”) to a distilled spirit. It’s known as genever.  In England, this became popular when a Dutchman became King. William of Orange reduced taxes on Gin in preference to other spirits. That unleashed a vast quantity of unlicensed cheap liquor that offered oblivion to the urban poor. The Gin Craze was born. Its negative connotations have lasted to this day. They were recorded by William Hogarth in an engraving called Gin Lane, which is the picture at the top of this article.

Gin and Tonic became a signature of the British Empire. Drinking water in India was laced with bitter quinine to combat malaria and was called Tonic. Gin was added to make it palatable. On their return to Britain, G&T remained the symbol of a declining monied class on which the sun slowly set.

It was Prohibition in the United States that first glamorised it, which lasted into the sixties. During the Jazz Age and Speakeasies, new cocktails embodied the self-confidence and decadence of affluent America. The Dry Martini became its emblem. No cocktail was ever as cool, sophisticated and urbane, an essential Hollywood and Boardroom accessory. James Bond insisted his Dry Martini was shaken, not stirred. I prefer the opposite. Either will do.

While Gin must contain juniper, at the cheap end, it’s simply a neutral white spirit with juniper flavouring added. It is cheap, dull and best avoided.

Distilled Gin is far superior. It’s the real deal. Neutral spirit of 96% undergoes distillation in the presence of botanicals. The botanicals are either immersed in the liquid or suspended in the distilled vapour. The spirit is then cut back with water to at least 37.5%. Unlike whisky or brandy, it isn’t aged to gain other flavour or to tame it. The result is therefore down to the quality of the botanicals and distillation. For a distiller of spirits that need maturation time such as Whisky, this is cash-flow heaven.

The botanicals make every example uniquely different. Common ones include Coriander, liquorice, citrus peels, orris root, cassia bark, angelica and star anise. Often, the exact recipe is often a closely guarded secret. Many other botanicals can be included, including expensive ones such as saffron.

When buying, check the alcohol level on the label. The minimum 37.5% minimises tax duty and so keeps the price down, a ploy used by some well-known brands. The best are usually 40% or more, a strength needed to keep the lighter botanicals from vapourising too easily.

Distilled Gin has a range of sub-styles.

London has no colourants or sweeteners allowed, so these are clear and very dry;
Plymouth must be made in Plymouth, because it was for the British Navy. It’s stronger, sweeter and earthier;
Geneva is the heavier and darker Dutch version which is sometimes also barrel aged;
Old Tom is the sweetest and is long out of fashion.

Gin went out of fashion during the seventies and eighties, and it seemed to be in terminal decline. However, the establishment of bar culture in Britain has restored it to eminence. Distillers have seized upon this, and there are now around 400 different bottles available. More seem to appear with each passing day.

While budget and mid-price examples continue to struggle, the premium sector has exploded. These trade on style and high quality derived from artisanal production. New distillers and brands continue to appear and the established brands, initially caught off-guard, have responded.

Gin is vibrant again, but is it worth paying extra? You bet, whether you take your gin neat or use it in a cocktail, the quality shows. There has never been a better time to discover its diversity and find one that best suits your tastes.

I conducted a blind comparative tasting of six premium Gins against my usual benchmark. Each one being markedly different and with something unique to offer. The results are in Part 2.

What’s your favourite Gin? Do let me know.