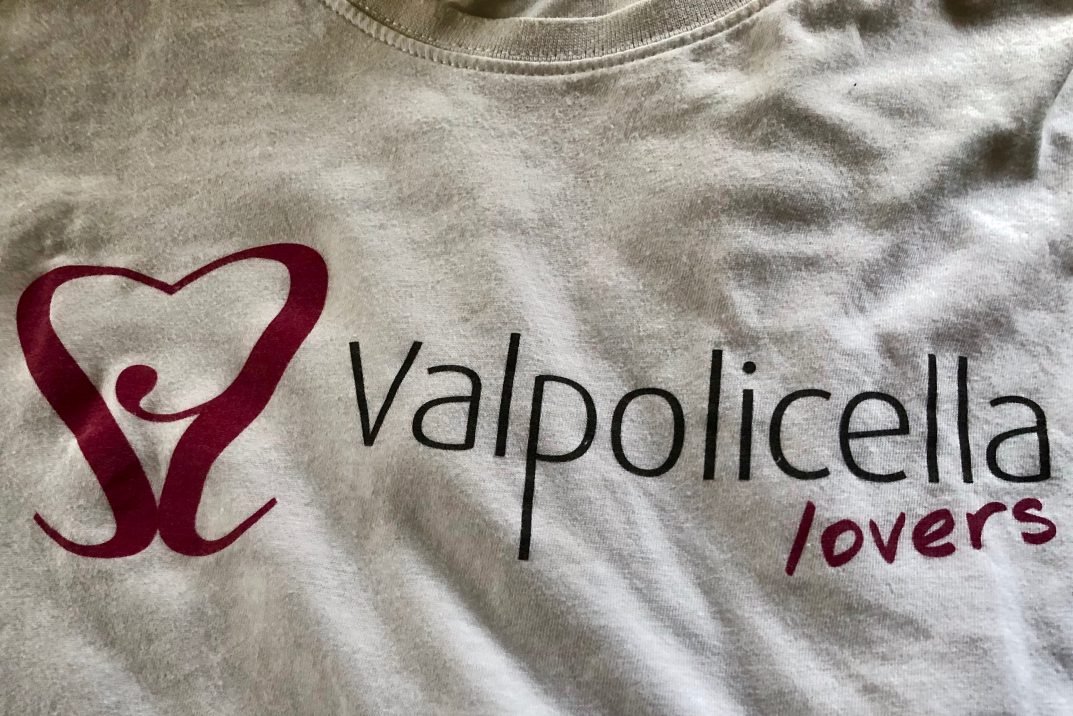 A: A cheap red quaffing wine without merit produced in vast quantity for supermarkets?

B: A wide range of delicious, different and distinctive red wines capable of complexity and longevity from a unique wine region?

Well, perhaps both of these statements have been true at different times. Valpolicella is a famous name, though in the past a name much traduced. These days, as we shall see, it’s an Italian powerhouse. However, there’s much more to Valpolicella than meets the casual eye. Here’s why. 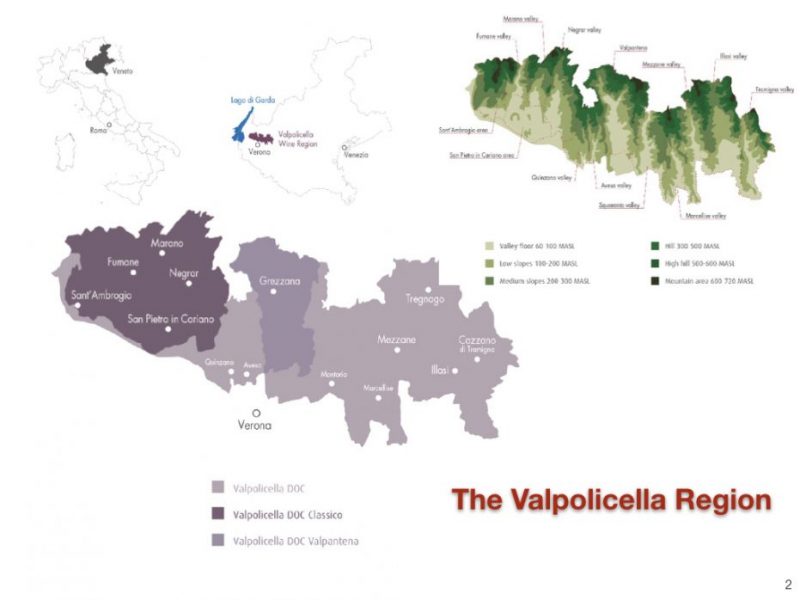 Valpolicella is a vast wine region in the Veneto, north-east Italy, known as “The Pearl of Verona”. The meaning of the word Valpolicella translates as “the Valley of Many Cellars.”

Valpolicella lies between the wine areas of Bardolino on the shore of Lake Garda in the west and Soave in the east. It sits just north of Verona, and indeed, some vineyards remain within the city.

Most Valpolicella occupies the hills and valleys that rise quickly northwards into the Lessini mountains and thence to the Alps. This area is mostly limestone, though towards Soave are ancient volcanic remnants.

A distinctive feature is that Valpolicella is cut through from north to south by eleven river valleys bringing meltwater from the Alps. These are like fingers, their waters flowing into the River Adige that forms Valpolicella’s western and southern boundary before passing through Verona.

This geographical location means that not only is Valpolicella magnificent, it also has a wide diversity in winegrowing terroirs. These range from relatively high altitude terraces and hilltops down to low lying flat plains and river beds. There’s every kind of aspect, orientation and exposure – so making unique microclimates. Unsurprisingly then, Valpolicella divides into three subzones. 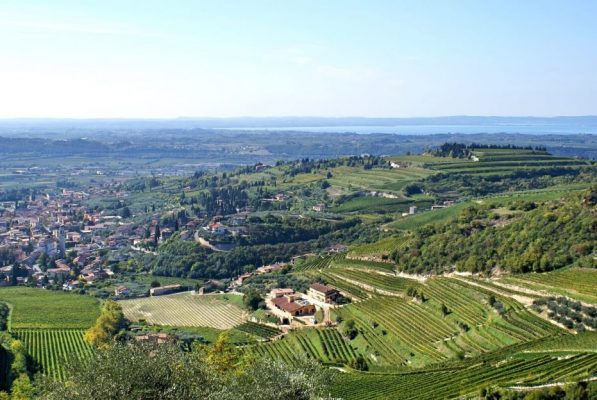 The diversity of the Sant’Ambrogio area in Valpolicella Classico, looking towards Lake Garda

The Valpolicella DOC was created in 1968 and resulted in a significant expansion eastwards from its smaller western origins in the area called Classico DOC. Classico is still responsible for around 40% of production and is influence by Lake Garda.

However, the expansion also created the subzone of Valpantena DOC and a “generic” DOC. Valpantena is more continental and can be the equal of Classico in quality.

However, the southern flatlands of the expanded generic DOC became responsible for those cheap and weedy wines that so sullied Valpolicella’s reputation up until the 1990s, typified by overcropping and machine farming.

While those wines still exist, this DOC also contains many excellent terroirs, with dedicated and innovative winegrowers. Hence, some of the best wines from Valpolicella are neither Classico nor Valpantena. As is so often, the producer is the best guide to quality, an increasing number of which are now also organic or biodynamic. Valpolicella production in total is vast, as these numbers illustrate:

There has also been a massive shift in production towards the Ripasso and Amarone styles. But, unfortunately, that’s at the expense of the fresh grape wines, which has fallen to only 32% of the total wine made. Indeed,  45% is now Ripasso, and 23% is Amarone/Recioto.

This shift is for several commercial reasons that are happily aligned: increased quality, rising customer demand and the much higher margins the dried grape wines command. Arguably, it was the popularity of Amarone from the 1990s onwards that not only saved Valpolicella but allowed reinvestment into overall better quality and innovation. One of the challenges now for Valpolicella is to ensure that this continues.

Valpolicella has various designations. The laws governing these have been in continual change since the DOC of 1968, amendments usually designed to increase quality or reflect innovation. In 2010, the Ripasso DOC was created, alongside the promotion of Amarone and Recioto to DOCG. The most recent rule changes are as of February 2019.

Hence Valpolicella now has the following appelations reflecting its diversity in terroirs and styles:

These wines are from freshly picked grapes, in the “usual” way. There is also a “Superiore” designation for those wines that achieve higher alcohol and have a minimum maturation of 12 months.

This wine is made by “repassing” the wine made with fresh grapes over the pomace left after making Amarone, inducing a second fermentation. Ripasso is sometimes an easy way to achieve Superiore status. The subzone may also appear. Ripasso originated in Valpolicella and has become an enormously popular style, and Valpolicella has even exported this method to countries like Argentina.

Amarone is the dry “appassimento” wine made from using dried Valpolicella grapes and is now Valpolicella’s “superstar” appellation. Initially commercialised from a Recioto “gone wrong,” the minimum maturation is for two years, or four for a Riserva. In practice, this period may be far longer. Classico or Valpentena may be also be stated, according to origins.

Recioto is the traditional “appassimento” sweet wine made from dried Valpolicella grapes. As with all sweet wines, it has declined in popularity even though it can be exceptional. Curiously, it’s the only designation that allows for sparkling wine (Spumante Dolce), a relatively rare sight, always sweet and red. Again, Classico or Valpantena may be stated, according to their origin.

Of course, there is also the IGT designation covering the diversity of non-conformist wines or innovations. Again, there are many excellent examples, usually labelled as Rosso del Veronese. Some of these are “Supervenetians”, similar to the Supertuscans from Tuscany.

Note that the Valpolicella appellations don’t include White wines or even Rosato (rosé) wines. All the designations are only for red blends, and Valpolicella MUST be a blend. With that in mind, Valpolicella has a diversity of optional grapes, but it MUST include Corvina/Corvinone (from 45-95%) and Rondinella (from 5%-30%). Thankfully, the laws stipulating these blending proportions are the same across all the appellations!

Corvina (the Raven) and Corvinone (the big Corvina) are the Veronese grapes defining mainstays of modern Valpolicella, once thought to be the same grape, so often found together. Over time their proportion in the blend has become ever higher. One reason for this is that the grapes are high quality and ideal for drying, having thicker skins that don’t split as they desiccate. As a result, Corvinone can be up to 50% of the amount of Corvina included. Corvinone can be a larger size, with more tannin and less aroma, but the difference in the vineyard is rarely apparent.

In 1993, scientific enzyme testing proved these varieties to be unrelated. It turns out that Corvinone isn’t related to Corvina or any other Veronese grapes!

Meanwhile, Rondinella is the junior grape partner, which adds a complementary herbaceous note to the wines and dries well.

In addition to these compulsory grapes, there is an entire raft of other options. Firstly, different local red grape varieties can be up to 10%.  The list is long: Molinara (no longer compulsory since 2003), plus other rarities such as Oseleta, Spigamonte, Cruina, Forsalina, Negrara, Rosignola, Pelara, Croatina (Bonarda) & Dindarella. Possibly, Recantina will be allowed in the future.

Secondly, it doesn’t stop there. Also authorised are other non-aromatic reds up to 15% of the blend, with a maximum of 10% of anyone. Those include Sangiovese, Barbera, Teroldego, Marzemino, Cabernet Sauvignon, Cabernet Franc, Merlot, Syrah and even Nebbiolo.

Hence the Valpolicella winegrower has a vinous palette of great diversity which to work!

Grape drying is the key to success. 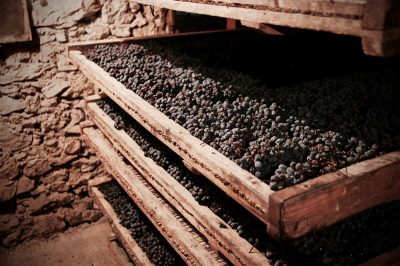 Drying Corvina grapes for Amarone in a Fruttaio

Meanwhile, as mentioned earlier, it’s Amarone that has become an enormous success. The recent parallel growth of Ripasso is only possible because of the amount of Amarone pomace now available. Hence drying the grapes is key – which is risky and expensive but pays off handsomely in quality and profit.

Amarone (and Recioto) is a selection of the best grapes in the Valpolicella vineyards. It can be up to 70% of the vineyard. While taking the maximum for Amarone might be commercially advantageous, this could include poorer quality grapes. Also, it would leave insufficient grapes for quality fresh wine. Consequently,  getting the selection balance is critical.

For example, in the brutal 2014 vintage, the Consorzio restricted the Amarone take to 35%. That ensured high-quality standards with a smaller amount made.

The selection of the best grape bunches is by hand and may involve several passes. First, the chosen grapes must be ripe, perfect and without a trace of rot. These dry in plastic or wooden drying boxes or on bamboo mats called arele. They are never left on straw mats to dry in the sun. Drying is in a building called a Fruttaio. Traditionally these were high up in the hills to avoid humidity and benefit from breezes. These days, it’s common to use air-conditioning in the winery instead. However, artificial heat isn’t allowable.

This process remains a risky business despite modern technology because grey rot can destroy an entire selection in a few hours.

Drying takes 90-120 days for Amarone (and 100-200 days for Recioto). The grapes become concentrated, losing 50% of their weight and 40% of their water. However, the process does much more than this. It’s a metamorphosis, creating new compounds such as glycerol and resveratrol. There are also other natural flavoursome changes; in sugars, acidity, amino acids and tannins. These will all add complexity and nuance to the final wine. Noble Rot (Botrytis cinerea) is usually unwelcome too. The producers aim for unique flavours from the drying process. 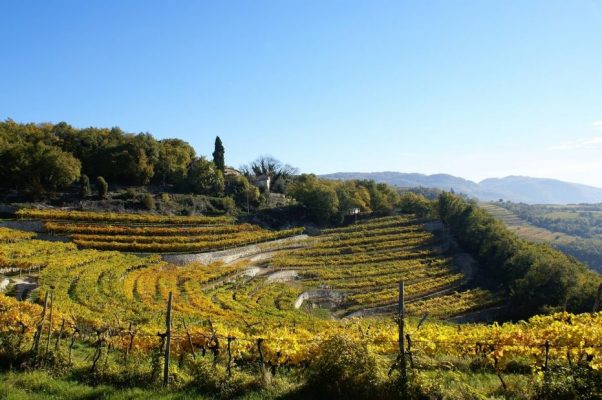 While the style of dry Amarone (meaning “bitter”) has probably existed in Valpolicella for centuries, it was never a deliberate wine style, rather a sweet recioto “gone wrong”, one that wouldn’t stop fermenting until the wine became dry. Often, this was in warm vintages before temperature control and where the local yeasts could also ferment out the high sugar. Bolla and Bertani both claim to be the first to commercialise it with their 1953s.

Meanwhile, Ripasso is an even more modern innovation, invented in the sixties and catching on as Amarone production grew.

Amarone pomace is a rich melange of still fermenting sugars, yeasts, skins, seeds and stalks. When added to the fresh Valpolicella wine, it induces a second fermentation, adding some Amarone-like complexity, glycerol and alcohol.

Subject to the length of the Ripasso, it will create either get a turbo-Valpolicella (from a shorter time) or an Amarone-lite (from a longer one). The style is at the winemakers’ discretion. – more diversity!

Diversity? Valpolicella is a wine region that’s far from homogenous and makes some truly unique wines in different styles and price points. Indeed, there is a red Valpolicella wine for nearly every occasion. If you’d like even more information, then check out the website of the Consorzio here.

But how should good examples taste? For that, it’s time to go to Part 2.