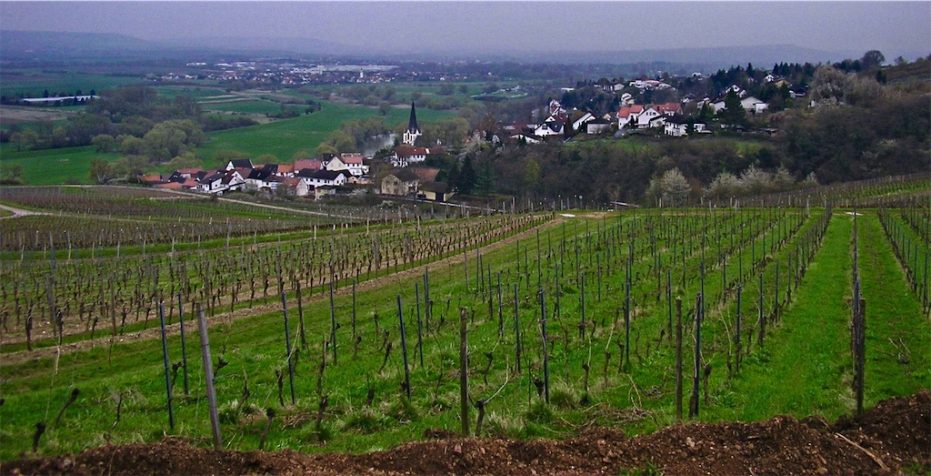 Dr Martin Tesch owns Weingut Tesch in the Nahe region of Germany. The estate has been family-owned since 1723, while the vineyards date back to Medieval times. These days, dry Riesling rules here.

Tesch is a microbiologist by training but a winegrower by inclination. In 1996, he took over the estate from his father, Helmut. Since then he’s made fundamental changes to the vines and wines. His inspiring story is one of a relentless pursuit of a singular vision. Furthermore, it’s a triumph of terroir. 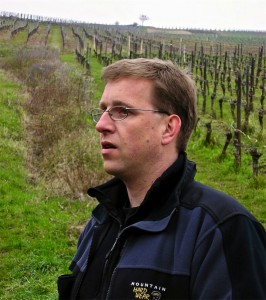 Weingut Tesch is in the town of Langenlonsheim, in a hilly part of the Nahe, which Tesch describes as a “mini-Rheingau”. Steep-sided hills overlook the winding river Nahe. Because the slopes face south, they offer protection from rain and the wind, and calm, warm conditions.

Also, the geological make-up of vineyards in the Nahe can change within the span of just a few hundred metres. Hence the soils range from weathered red sandstones to volcanic rock, and from clays to wind-blown loess. Riesling thrives in this broad spectrum of soils and it can reveal a sense of place that is unrivalled by any other in Germany.

Martin Tesch greeted us cordially on a sunny morning on the road bordering his vines.

“Wineries are boring, and they all look the same”, he says, “so out here in my vineyard is where you can experience all the real action”.

We begin to climb through the Krone vineyard – the slopes are deceptive, even steeper than they first appear. After a few hundred metres we reach a restored workman’s hut. It has a commanding view over the vines to the valley below, with the villages of Langenlonsheim and Laubenheim in the middle distance. “Welcome to my tasting room,” says Tesch.  Through tasting the Tesch Rieslings here, we will begin to understand the complex language of this land.

When Martin Tesch took over, the estate had 30 hectares of vines. These produced a very wide range of wines, as was typical in the Nahe, made from a multitude of grape varieties. In addition to Riesling, there was Muller-Thurgau, Silvaner, Rivaner, Scheurebe, Gewürztraminer, Weissburgunder (Pinot Blanc) and Spätburgunder (Pinot Noir).

On top of this, the styles made were the traditional German QmP classification based on sweetness; Kabinett, Spätlese, Auslese, Beerenauslese, Trockenbeerenauslese and Eiswein.

So those 30 hectares were producing over fifty different wines – that was complicated to manage and increasingly uneconomic. While Tesch had loyal customers internationally, the reputation of German wine was also fast ebbing away, and the Rieslings were getting sweeter with every passing year.

Tesch’s answer? “I created the Punk Rock Winery”, he said, only partially tongue-in-cheek.

Martin Tesch brought about a complete change in winegrowing philosophy and broke with the past. Firstly, he abandoned the north-facing vineyard slopes as they naturally produced poorer grapes. Those have reverted to nature and help create habitat and biodiversity. Tesch’s neighbours have seen the improvements this has made, and some have also followed suit.

Then all the vine varieties that didn’t perform or sell well got grubbed up. Inferior grape varieties like Muller-Thurgau were early casualties. The Gewürztraminer soon joined it, because “I just don’t like it”, said Martin with a winning smile. After simplification, all that was left was just 11 hectares of Riesling, plus three ha of the two surviving Pinots.

Now Riesling covers 17 out of a slimmer 20 ha, and the vineyards are organic. These Tesch holdings contain two principle soils. One is volcanic, the other weathered sandstones. These have a cover crop of weeds and grass between the vine rows. Pruning is into vertical double canes, and there is also a rigorous green harvest in summer. The result is small yields of just 20-30 hl/ha. In Germany, this is minuscule.

The traditional German description of the grape sugar levels achieved at harvest is at Kabinett and Spätlese levels. From 2001 he made the biggest change of all – “Die zeit ist reif für trockenen Riesling”, Tesch exclaimed. In his excellent English, he immediately translated, “the time was ripe for dry Riesling”.

Hence sweet wines from Tesch are now largely consigned to the past. “I wanted to leave no winemaking imprint on the wines, to have the wines express their origins, as they do in Burgundy”.

So all the wines are made trocken, fermented out to bone dryness, with residual sugar only left to balance the acidity. There’s no oak used in the winemaking either. Those would blur the precision of these Rieslings. Hence fermentation is in small stainless steel barrels, and the winemaking is as natural and non-interventionist as possible. There’s no chaptalisation (the artificial adding of sugar) and the long fermentation preserve aromatics. The secondary Malolactic fermentation happens spontaneously. Tesch’s knowledge of microbiology gives him total control in the winery.

But what of the change to selling dry rather than traditionally sweet Rieslings? This activity was not plain sailing.

Sales fell by 40% within the first six months! There was also vociferous criticism from his existing customers and many German wine critics. They accused him of going against German tradition, of destroying his heritage. Tesch ignored them and retained the courage of his convictions. Tesch is adamant, “Riesling has a backbone; it’s not supposed to be an easy drinking peachy, sweet wine”.

Hence within two years, with new customers found, sales had recovered. Now Tesch was receiving accolades rather than brickbats. Ultimately, this revolution even became a Business School case-study taught at the London School of Economics. “They kept asking me about my strategy. I kept telling them; there wasn’t one”.

Tesch also has a genius for marketing innovation and packaging, which seems more rooted in the Bauhaus than in winemaking.

There are six versions of Tesch Riesling; an entry level wine for young drinking called Unplugged, and five single vineyard wines that reflect their underlying soils.

The only nod to the past is a picture of Tesch’s Great-grandfather that appears on every label, as it has done for 150 years. Everything else about the packaging is ultra-modern. Black flute bottles have cleanly designed labels without long German words. Colour-coding identifies each different Riesling. It’s rather like the lines on a map of the London Underground.

Since 2005, all bottling is under screw cap. Tesch used the Alcan STELVIN® Lux closure and was the first winegrower in Europe to do so. This closure has no externally visible screw-thread, so it looks very smart.

In short, all this is far away from the traditional German label with its complex Gothic scripting.  Simplification has helped Tesch establish a clear identity for each wine made, but tasting reveals their differences entirely.

Unplugged is the entry-level Riesling for drinking when young and up to 5 years. Tesch describes the style as “like those unplugged music sessions, without amplification”.

Pale green colour with flecks of silver. With a bone-dry palate and 11.5% alcohol, it’s a Kabinett trocken and so is the lightest wine in the line-up. Just 2 g/l of residual sugar and 8 g/l of acidity leaves a soft, balanced wine with peachy aromatics cut with a flinty minerality.  “It’s my party wine”, said Tesch. Some party. If you are unfamiliar with the dry German Riesling style, then this is an excellent place to start.

The following five Rieslings are from individual vineyard sites (Lagen-Riesling) in Langenlonsheim and nearby Laubenheim. Each shows a clear sense of place. You can drink these wines young. However, they will reveal all their glory with 5-10 years bottle age. 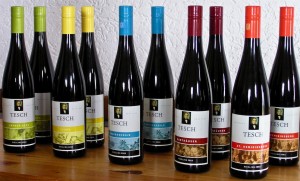 The Five Terroir dry Rieslings by Tesch in the Nahe

All five wines are Spätlese trocken; usually around 12.5% Alcohol with around 4 g/l of residual sugar and 7.8 g/l of acidity. Each wine is different, reveals its origins clearly and has decades of development ahead. Hence comparing them side-by-side is a fascinating exercise.

Apfel – apple, green label. This vineyard is between Langenlonsheim and Laubenheim. It’s one of the oldest vineyards in the Nahe, with fertile and humid clay soils and stony river gravels. A golden colour flecked lime-green. Beautiful aromatics, sublime minerality and the merest hint of petrol developing. Richness and intensity, a sherbet nip on the tongue. Key Lime Pie fruit and a long length. Racy, focused and brilliant.

Sandstein – sandstone, ochre label. This amphitheatre-shaped vineyard once belonged to the Carthusian monks at Laubenheim, hence the name. With a South-east aspect and weathered iron-rich sandstone soils, this is the warmest of the vineyards. A pale gold. Fruit is sherbet lemons and grapefruit. A more rounded palate, it feels softer with a silkier texture yet still has that firm, steely backbone. Some spices appear on the long finish.

Vulkan – volcanic, orange label. Once owned by Benedictine monks. It’s adjacent to Karthäuser, one of the smallest vineyards in the Nahe region, with volcanic soils.  Big power, smoky pineapple and white blossom aromatics. The palate is in a much more opulent style, with a long, mineral-laden finish.

For my personal taste, the St. Remigiusberg edges it by the smallest of margins, but all are brilliant wines. Consequently, I recommend that you buy one of each just to explore their differences.

If you want to encounter the full meaning of terroir, then I can think of no finer place to go than Tesch.

Indeed, the dry Rieslings of Martin Tesch act as remarkable lenses on the Nahe landscape. Subtle and delicious expressions of dry Riesling, they are also superb value.

Meanwhile, why not join in with 31 days of Riesling here.

Like Dry Riesling? Check out this one from the Rheingau region