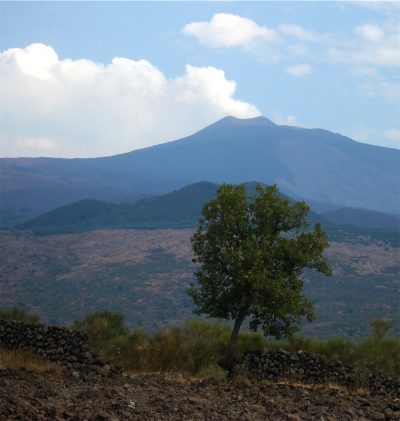 At 3,343 metres (10,968 feet), Mount Etna (Mongibello) spits, snarls and smokes. All around is ash, black as death. Above us, the summit has four active craters caked with yellow sulphur. Etna erupts almost continuously, and as we climb to 3,050 metres, it’s too dangerous to ascend further.

Downwind, the air fills with the stench of sulphur. It’s noisy too; hissing, explosions, rumbles, the fall of pumice and the pattering of ash.

But oh, the views! The Ionian Sea and beautiful Taormina sparkle a few kilometres to the east, while 1,500 metres below is base camp, Piano Provenzana. It contains the wreckage of old ski-tows and buildings engulfed by lava and ash. Far below in a blue haze lay the vineyards, garlanding the lower slopes.

A little vulcanology is in order. Etna is a Stratovolcano. Hence Etna’s pyromania creates explosions, unstoppable lava flows, ash clouds and pyroclastic flows. Now half a million years old, Etna has grown up to become Italy’s largest mountain south of the Alps.

Etna shapeshifts constantly. There are over 300 easily visible rips, craters and vents. The eastern flank contains the immense chasm of the Valle del Bove, a collapsed caldera. Earthquakes and tremors are frequent, and her height changes with each new eruption. 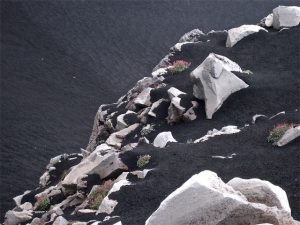 Eruptions aren’t just at the top either. New vents open up frequently on the lower flanks, and it is these that pose the most danger. Already in this short century, they have threatened entire communities. Throughout history, Etna has overwhelmed towns and villages. Indeed, the UN classes Etna as one of the 16 volcanoes posing the most risk to life and property. Here’s a live feed of Etna’s activity.

Nevertheless, as well as a destroyer, Etna gives life. Incredibly fertile soils form quickly from the lava and ash. Plants colonise quickly. Only the very top of Etna is a desert. Below 2,000 metres, there are thick stands of chestnut, larch, beech and oak. This vast area has been a National Park since 1987. Hence there is no logging or hunting.

The soil and climate bless Etna with produce. Almonds, hazelnuts, walnuts and sweet chestnut are abundant. Around Bronte are red pistachios. Figs, apple and pear orchards, groves of citrus, olive and the ubiquitous prickly pear abound. The juiciest peaches are from Mojo Alcantara, while honey is a speciality of Zefferana. Tap water, naturally filtered by the lava, is delicious; it comes laden with volcanicity. And then there are the vines.

The Ancient Greeks made wine on Etna, though wine-making dates back much further. The Romans extended the vineyards, continued afterwards by a variety of subsequent invaders. So it goes.

Etna was the most significant area under vine in Sicily by 1890, capitalising on Mediterranean export markets when Phylloxera devastated France. But then it was Etna’s turn to suffer. The relentless spread of Phylloxera reached Etna ten years later. In the ensuing crisis, vineyards became abandoned, and exports collapsed, though a few vines remained unscathed. More catastrophes followed, such as Etna’s eruptions of 1928, 1949 and 1971, with two World Wars and mass emigration.

The abandoned burnt-blackened terraces and lava engulfed buildings are readily visible today. These alternate with the glinting wires that denote newer vineyards. Ruinous farm buildings and the occasional handsome Villa dot the landscape. Heroically built stone walls mark the field boundaries. In between, heaps of volcanic stones called turritti allow the passage of a plough.

Today prosperity has returned, driven by tourism. Summer beaches and winter skiing have been the principal attractions. The local towns are benefiting, their streets paved by smooth lava and flanked by baroque architecture. Ornately filigreed balconies overlook bustling piazzas piled high with produce. But medieval buildings are rare, a more subtle reminder of Etna’s destructive power. Meanwhile, there is another good reason to visit; the ongoing Etna wine revolution.

In the oldest vineyards are field blends, where different varieties coexist together, an ancient practice. Plots that predate the arrival of Phylloxera survive, with remnants of 150-year-old gnarled vines. The evil insect can’t reproduce as well in these black ash soils. 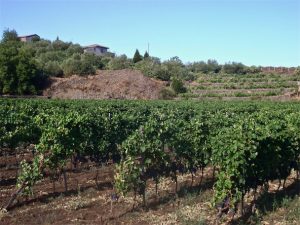 Modern vineyards wire train the vines in rows and are big enough to accommodate small tractors. However, albarello bush vines produce the best quality grapes, though this is labour intensive and costly.

It was Etna that received Sicily’s first DOC in 1968. It restored some credibility to the region. As was often the case, the criteria used enshrined traditional practice and administrative convenience rather than encouraging excellence. Perhaps updating the rules is overdue. At least the grapes allowed by the DOC must be indigenous to Etna, or at least Sicilian.

At between 450 and 1,250 metres altitude, the Etna DOC follows a broad crescent around the contours of Etna. It runs from inland Randazzo in the north-west, through Milo in the east around to Biancavilla in the south-west. The western side of Etna is considered too wet and is instead an area of Pistachios. As of 2018, 67% of DOC production is Rosso or Rosato, with 30% Bianco and 3% Spumante.  While the DOC area under the vine is some 908 ha*.

The main local varieties, Nerello Mascalese in red and Carricante in white (aka, Cabanese Bianco), are Etna’s glory. They can make great, age-worthy wines.

Allowing inferior grape varieties can potentially traduce DOC quality. For example, the DOC Rosso still allows blending with white Trebbiano, though this is now uncommon. In contrast, the DOC Bianco Superiore has a higher minimum of Carricante.

The Etna DOC doesn’t include all the best vineyards. Sometimes, the DOC boundaries look as if they were drawn at random, following roads and even bisecting single vineyards. As a result, some of the best wines are the broader IGP Terre Siciliane.

The proliferation of IGP can be with good reason. For example, the grapes may be from outside the DOC zone, as mentioned above. Alternatively, production methods may not fit the DOC rules. For example, maturing wines in new French oak barriques became a standard indicator of ambitious winemaking. And though this practice has reduced as it doesn’t suit Nerello, its use isn’t authorised by the DOC.

However, the biggest reason for IGT is the use of non-DOC grape varieties. Where it is warmer, e.g. at Linguaglossa, Alicante (Grenache) grows. It is local here, though no-one knows when it first reached Sicily or who brought it. One theory is that it came by ship with Admiral Nelson, who had a villa at Bronte. There are other Sicilian natives on Etna too; red Nero d’Avola, and whites such as Zibibbo (Muscat Alexandria), Inzolia, Grecanico and Malvasia.

Inevitably, international varieties such as Cabernet Sauvignon, Merlot, Syrah, Pinot Noir and Chardonnay are present. You’ll also find Petit Verdot, Mondeuse and even Riesling. These, of course, are capable of making great wines.

Etna’s challenge now must be to avoid the black hole of internationalism and its dead-end future. Given Nerello Mascalese and Carricante, the Etna terroir’s uniqueness, the different Contrade and the influx of dedicated winemakers, I believe international dominance can be avoided, with those grape varieties instead adding some welcome light and shade.

As is so often the case, the key is terroir, by which winegrowers can express this sense of place, so that’s the subject of Part 2; It’s the Burgundy of the Mediterranean.

Map/Location Tip: try the Satellite View and zoom in: the lava fields are spectacular.