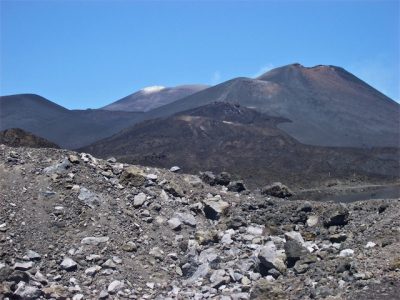 Etna terroir, the Burgundy of the Mediterranean – the Lava Lout Returns, Part 2 of 2

Part 1 of this article described how a Sicilian volcano bestows natural gifts to create the Etna terroir. But Etna isn’t one terroir; there are many variations. Welcome to the Burgundy of the Mediterranean.

Etna’s volcanic soils are free-draining and low in humus. They are full of minerals, especially iron and potassium. New ash and lava fields decompose quickly into sciara. Its chemical makeup varies by location, changes annually and is prone to rainwater erosion. The mud created after rain clogs up tractor engines and may deter Phylloxera. Meanwhile, this rough terrain quickly breaks machinery.

By usual standards, the vines grow at a high altitude, from around 400 metres. In general, Nerello Mascalese will ripen up to about 1,000 m and Carricante to about 1,250 m. So the grapes have long and slow ripening seasons. Planting high avoids the most brutal heat of summer. The newest vineyards are ascending higher still. Consequently, harvests are some of the latest in Europe, with early November not unusual. But this risks inclement weather.

At these southerly latitudes, rain (and snow) is mostly in winter, arriving on prevailing westerly winds. But Etna is so massive it makes the weather, which can change rapidly. Thunderheads bubble up in summer, and violent storms ensue, while heat differentials create cooling breezes. The inland western flanks around Bronte and Adriano are the wettest. Instead, red pistachios grow there in preference to grapes. The eastern side at Milo and Vilagrande is drier but has higher humidity as it’s nearer the sea. There the vineyards are being engulfed, not by lava but by suburbia. Milo is where the Etna Bianco Superiore DOC hails from, one of Italy’s greatest white wines.

Arguably, the finest Etna terroir lies on the north side. It’s much drier and breezier there, reducing pests and fungal disease pressure. That makes organic cultivation easier too. In fact, the biggest pest is free-roaming sheep and goats. Unsurprisingly, there are many fences!

The best northern vineyards follow the route of the SS120. It’s the old Roman road connecting the wine towns; from Randazzo, through Passopisciaro and Solicchiata to Linguaglossa. Sometimes known as the Golden Triangle, if there were ever a Classico DOCG zone waiting, I’d say this is it.

Interlude: The Ferrovia Circumetnea – the effortless way to explore vineyards

The Ferrovia Circumetnea narrow-gauge railway, built-in 1888-89, is a gem, literally encircling Mount Etna. Part of the line is now the Catania Metro. The Randazzo to Catania anticlockwise route takes about two hours. Travelling clockwise from Randazzo is best by far, as it goes through the Golden Triangle to the old seaport of Riposto. Engulfed by lava several times (as recently as 1981), the repairs are easily seen as naked cuttings through the newly solidified lava. 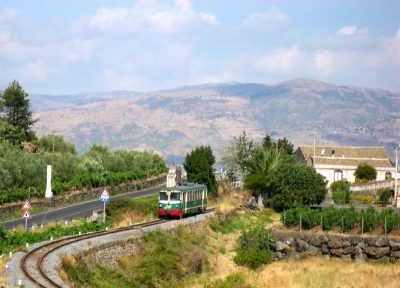 The line snakes through the contrade vineyards from Randazzo. It leisurely follows the contours until it descends towards the sea at Piedimonte Etneo. There are plenty of stops throughout, including stations at thee wine towns. The locals flag the train down and alight whenever it intersects a road, which is a frequent occurrence.

Steam locos ran until 1963. The FIAT diesel trains that operate now date from 1938. These have green, red or orange livery and red leather seats. Warning – there is no air-conditioning!

There are half a dozen trains per day, Monday-Saturday, with the one-way trip taking 75 minutes. There is no better way of seeing the Etna terroir. Vineyards, citrus groves, lava fields, towns and villas. All set against Etna, the Alcantara valley, and with the Ionian Sea as a stunning backdrop.

Where once there were a dogged handful of producers, there are now 136 in total.

The improvement in the quality of Etna’s wines has occurred at all price levels. Refreshingly, the larger producers are as important as the coterie of boutique wineries. Hence the everyday wine drinker will find great value and as much to enjoy as any connoisseur.

The early pioneers of rejuvenation included Benanti. They had made wine years before they started commercial activities. They inspired Sicilians like Alberto Graci and Salvatore Foti. Foti became a consultant to many of the new Etna wine producers. Then there are excellent producers such as Áitala, Gambino, Rocca d’Api and more.

High-profile wine companies from other parts of Sicily have invested in Etna.  Sicilians that have expanded to Etna include Planeta, Tasca d’Almerita, Gulfi, Firriato, and Corvo.

Now winegrowers from other parts of Italy are exploiting Etna’s potential. Andrea Franchetti pioneered ancient remnant vineyards with the Passopisciaro winery and is now making individual Contrade (Cru) wines. Another is Marco de Grazia with Tenuta della Terre Nere. The Cambria family from Napoli run Cottanera.  Angelo Gaja from Piemonte is the latest. 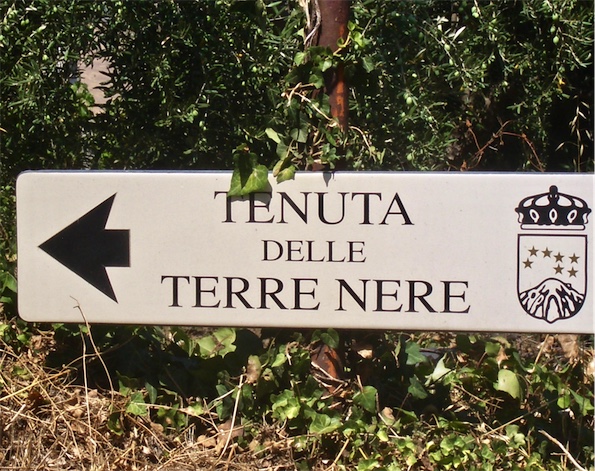 The Belgians have joined in too. Frank Cornelissen has Cornelissen, while Trente Hargrave and Filip Kesteloot own Terre di Trente.

Single vineyard wines from the 133 local Contrade (or local districts) show the clearest sense of place, and their names are shown on the labels. They include the likes of Arcuria, Malpasso, Favazza and Porcaria. Perhaps the best-known trio is Feudo di Mezzo, Guardiola and Rampante.  One day these could become established Grand Cru, similar to those found in Barolo or Barbaresco.

The future’s so bright …

Winemaker Marco de Grazia made a bold statement on the back labels of his Etna DOC bottles. In short, he said that Etna is “the Burgundy of the Mediterranean”.

I didn’t understand this until I visited. After all, volcanoes don’t glower over Burgundy. Those soils are limestone, and the principal varieties are Pinot Noir and Chardonnay. And Etna has no clearly defined hierarchy of villages and individual sites.

But his meaning is more subtle and is now clear to me. Nerello Mascalese and Carricante can make beautiful wines, but they possess the added gift of revealing the land’s subtleties. Just like Pinot Noir and Chardonnay.

The winning formula on Etna seems to be to grow Nerello Mascalese and Carricante and concentrate on making Cru wines from Contrade. Then that Burgundy comparison makes sense. Could Randazzo, Linguaglossa, Passopisciaro and Milo one day equal Gevrey, Montrachet and Vosne? Perhaps it’s time for an Etna DOCG at least?

The Etna renaissance still has a long journey ahead. But the Etna terroir rivals the great Italian regions of Piedmont, the Veneto, and Tuscany. And perhaps Burgundy too.

All this talk of Etna wines makes me hungry, so here’s an authentic and easy recipe for Spaghetti Alla Norma, the ideal match for Etna Rosso.

Footnote: Jancis Robinson originally published this Etna article in 2008. But as Etna wines have continued development, this article has been updated to amend relevant production rules and facts.