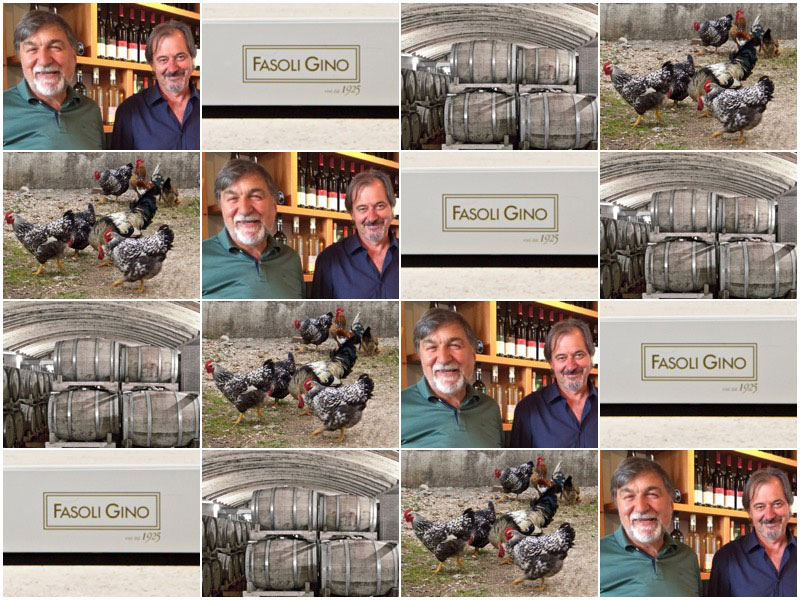 I love discovering less well-known producers that make exciting wines. Excitement for me is about wines that express terroir and the personality of the winemaker. Fasoli Gino is one.

Amarone is an elegant and powerful dry red wine made with dried grapes. Now famous, its success has driven the resurgence of the Valpolicella region. The best producers focus on innovation and investment in their vineyards and wineries.

Amarone has iconic status. The best achieve a balance of intensity, purity and complexity that makes it arguably like no other wine. As in any wine region, quality varies. It is never cheap. Discovering rising stars, such as Fasoli Gino, is a memorable event.

Fasoli Gino lies twelve miles east of Verona, in the beautiful Illasi Valley. Founded in 1925 by Amadio Fasoli as a fruit and vegetable farm, making some wine for consumption in Veronese bars. In the 1960s, his son Gino focused on wine.

In 1979, his sons, Natalino, and Amadio inherited the Estate. They transformed it by converting to certified organic production in 1984. Pesticides and herbicides had harmed their father’s health.

“We rejected those synthetic products as we must respect the farmers, the consumers, and nature,” Natalino told me. By 1990, the quality uplift was evident, so in 2006, they introduced Demeter-certified Biodynamic practices.

While they own only twenty hectares of land, they access another hundred through growers working under their supervision. Hence, they can draw upon a broad range of terroirs and grape varieties while controlling quality.

Traditional pergola vine training features nets to protect the vines from frequently destructive hailstorms. The health of the vines is clear to see, with cover crops grown between the rows for green manure. Rare-breed chickens are employed to keep down vineyard pests, a brood led by a particularly amorous Cockerel.

The modern winery has the recent adoption of solar power and will be zero-emission by the end of 2016. It takes four months to air-dry the Amarone grapes, with a high proportion of Corvinone used. Fermentations are long and slow, with cultured yeasts used. Few strains can cope with the high level of grape sugar and resultant alcohol. They also reduce the risk of a stuck ferment that would create high levels of unwelcome volatile acidity (VA). It’s a low-sulphur regime (with two no sulphur wines), and vegan-friendly.

Fasoli Gino uses mostly new and second-use French oak barriques to ferment and mature the Amarone. Once blended, the wines finish off Slavonian oak casks before. The whole process takes 48 months. The Amarone casks are passed on to use for Valpolicella after three years use.

Continual experimentation characterises Fasoli Gino. There are no sulphur wines and apassimento Merlot and Pinot Nero wines in an Amarone style. Both are unusual, excellent and difficult to make. Their latest creation is a Rosé Metodo Classico fizz called Creaman, made from Corvina grapes grown in Bardolino. Possibly the only one on the market, it’s delicious.

On this splendid visit, I was particularly impressed by the way Fasoli Gino engages with their communities. For example, there is a winemaking project that employs young people with special needs in Bardolino. There are also placements for high-school and university students.

“What’s next?”, I ask. Natalino shrugs and smiles, with a glint in his eye. “I’m thinking of something”. Well, I’d like them to make Recioto Della Valpolicella, the sweet red dessert wine from which the dry Amarone evolved.

I love their combination of ancient knowledge, Steiner philosophy and modern technology. They are doing the right thing right. But the real story here is Amarone, which they began with the release of the 1984 vintage in 1989. Today, they make around 500,000 bottles per year in total. 100,000 are Amarone, including their flagship, called Alteo. Does it live up to their efforts?

Their style of Alteo Amarone is robust and spicy. I approached it cautiously as the alcohol level is 17.5%. Usually, I prefer Amarone to be lighter in alcohol, as elegance and balance are key attributes for me.

However, the wine is very well balanced. There is no aggression or heat, just a silky, weightless mouthfeel, juicy acidity, and pure fruit. Alteo is muscular but has a remarkably elegant and gentle presentation without tannic harshness. Neither is the oak treatment overdone. There is enough wood to support and integrate with the fruit, but no more. While there is some residual sugar, the wine finishes refreshingly dry.

I have found some Amarone cursed with VA (volatile acidity), or too sweet on the finish. Not Alteo. That old wine cliché about Amarone being an iron fist in a velvet glove applies.

I tried four vintages; 2008, 2007, 2006 and 2004. All were different; all were excellent. 2008 was open and perfumed, with brown spices, liquorice and black cherry. I’d drink that before 2007,  a cooler year giving a less evolved wine with red cherry fruit. 2006, is a classic,  beginning to show its age, a brick red colour with more complexity; think Kirsch, chestnut, figs and cinnamon. 2004 had the more potent scent, a little less concentrated than the 2006 but with exquisite balance and finesse.

The next day I blind-tasted 78 Amarones from the 2012 vintage at the Anteprima Amarone in Verona. Afterwards, Alteo was in my top six.

A common descriptor for Amarone is Vino di Meditazione (think cold nights and roaring log fires). It’s always a wine for a special occasion. It will match with food if you match power with power. Beef, game and porcini mushrooms all work well. So does old hard cheese like Grana Padano. More unusually, try barbequed ribs or sweet and sour dishes.

In the UK, Alteo is £55.00 at Vintage Roots. They also have the widest range of other Fasoli Gino wines, starting from £9.00