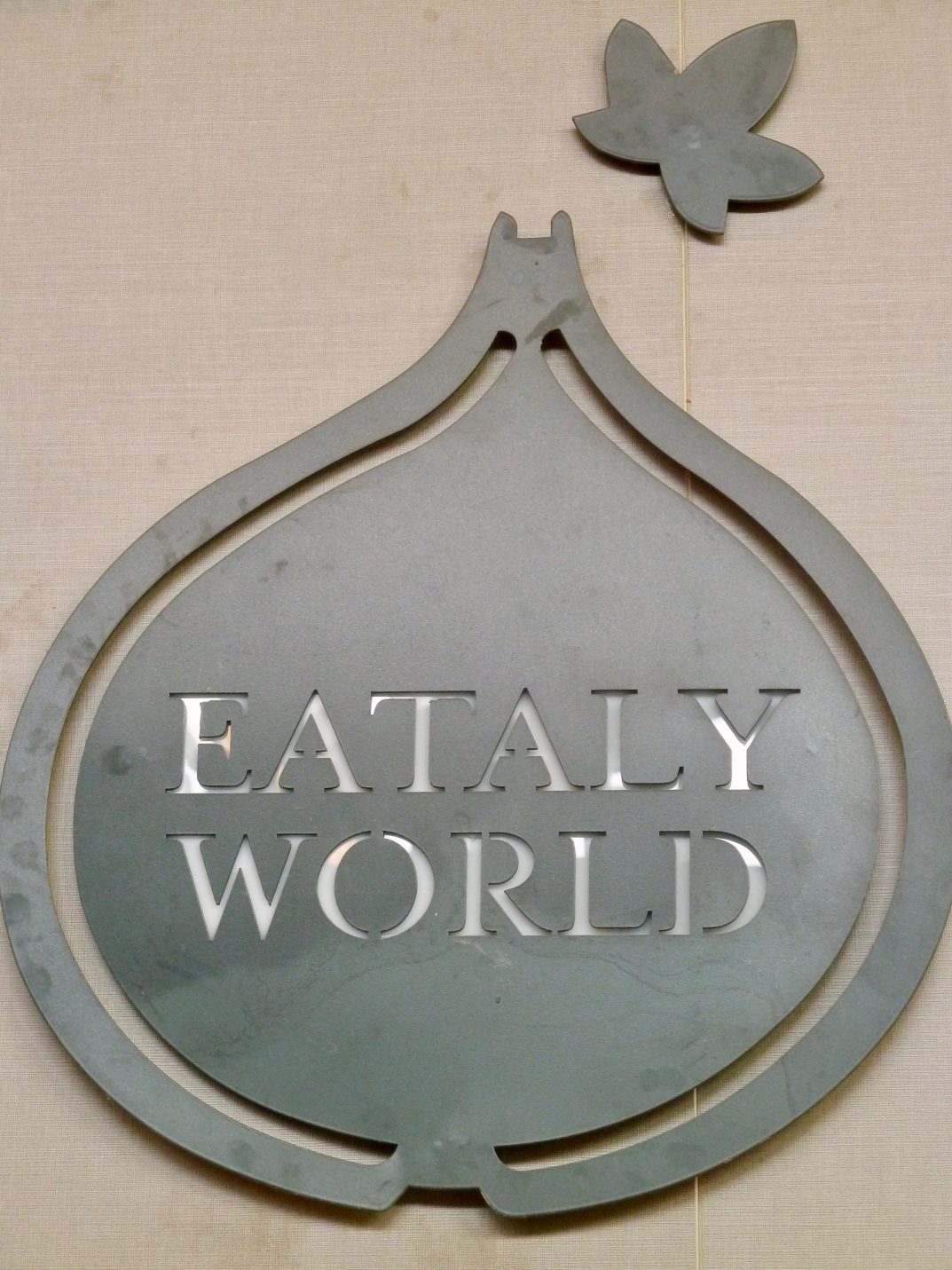 FICO Eataly World. From Farm to Fork in Bologna.

FICO Eataly World opened in Bologna in November 2017. Though I was in Bologna exploring the nearby Colli Bolognesi wine region, unfortunately, I didn’t get a chance to visit it. Instead, I vowed to come back and, nearly a year on, I did. I went twice.

This special place is all about linking Italian food and agriculture together. Since it opened, it’s been called a theme park, a Disneyland, a food Mall, a tourist destination, even a New Age learning centre. It’s perhaps all of these things, but there’s much more besides.

In brief, FICO is a public-private collaboration between the Mayor of Bologna, various co-ops and the Eataly food hall brand. As an aside, Eataly has stores in Italy and cities worldwide, with a new branch opening on Bishopsgate in London in 2020.

FICO is on the site of a disused wholesale fruit and vegetable market, out of the city centre in north-east Bologna. The construction took four years, creating an L-shaped barn building featuring 44,000 solar panels. Consequently, it’s said to have cost €120 million and created 3,000 new jobs.

Moreover, they expect 6 million visitors per year and, on a late-summer weekend, it feels like it. Hence, going mid-week is a much more relaxed experience, avoiding sensory overload. FICO is open every day from 10 am to 11 pm and from 10 am to midnight on Saturday. Hence it’s easy enough to avoid the crowds. What I guarantee is that you can spend entire days here and not see or do everything on offer.

The scale of the site is epic. It covers 100,000 square metres, all devoted to Italian biodiversity, food and culinary traditions. What makes it unique is the opportunity to see all the processes behind the making of Italian food. Here, you can trace the entire story of Italian cuisine.

Furthermore, four Universities are also involved, so FICO is also a research centre. Sustainability, diversity and terroir are the watchwords here.

Hence there’s much more to do than shopping or eating. Though granted, that’s the reason I went.

Much more to do than shopping 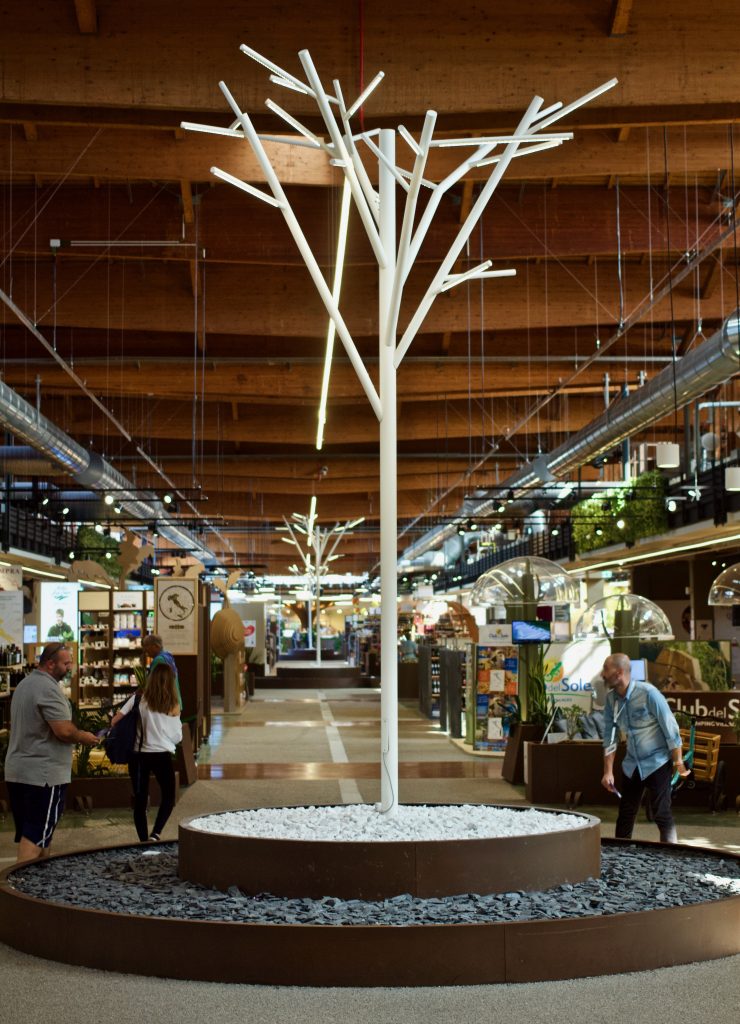 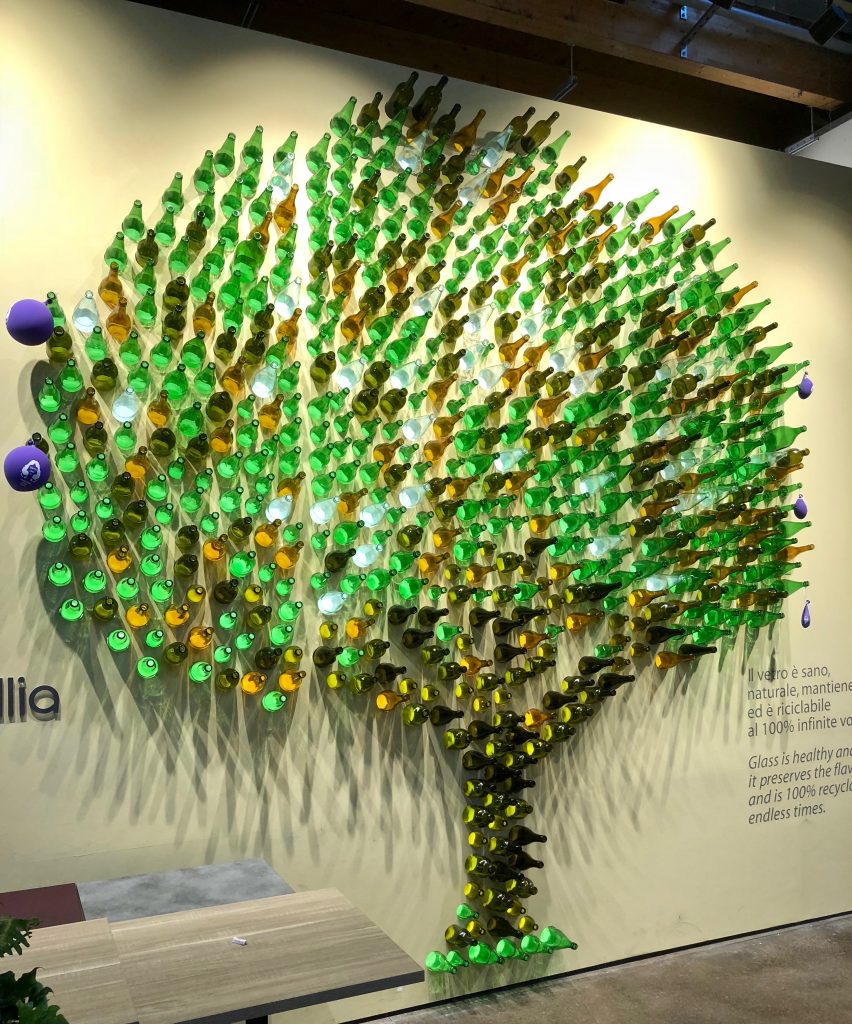 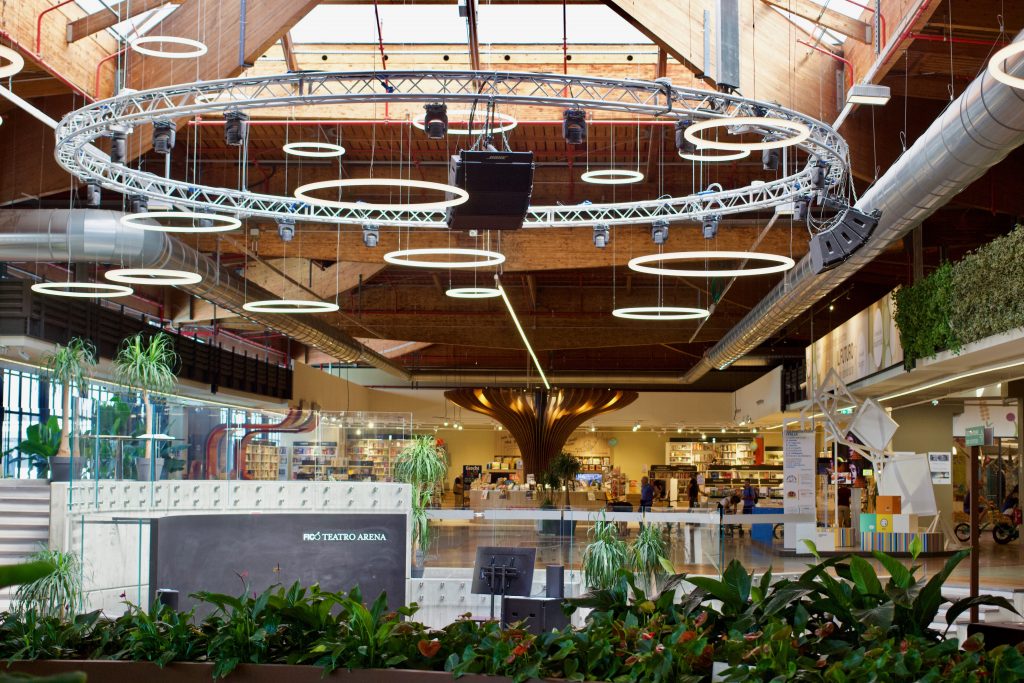 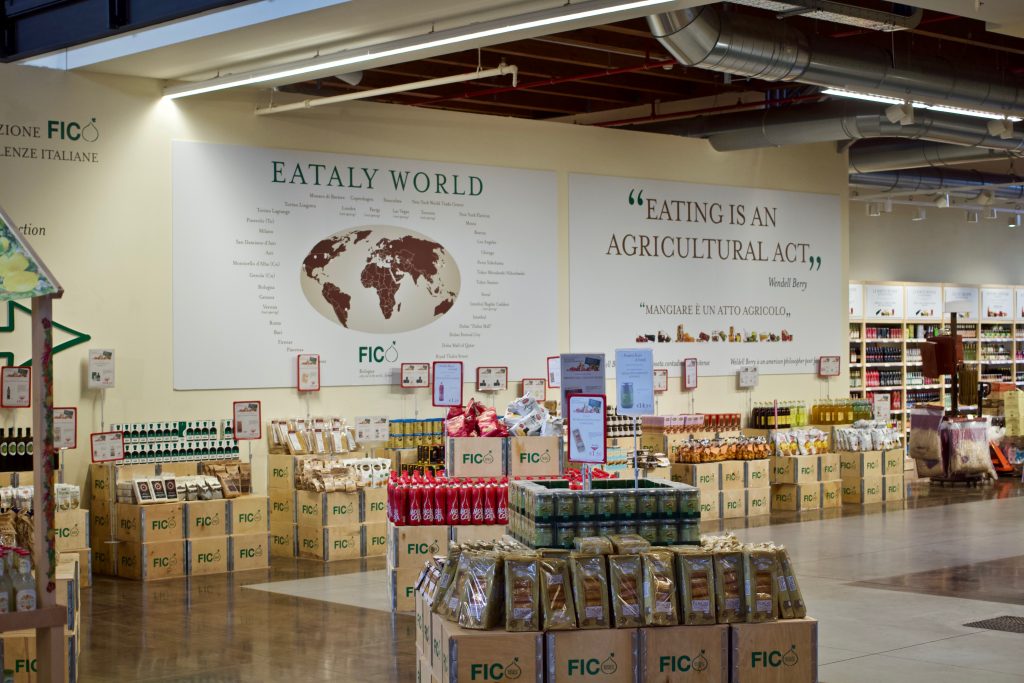 Ten hectares is so vast a space that it can appear daunting as well as exciting at first.  Yes, there are bigger shopping malls, but none of those is dedicated solely to Italian Food! And there are no wasted or empty spaces either. Unexpectedly, there’s plenty to see and do outside of the building as well as on the inside. Every Italian region is here so that you can trace the origins and traditions behind almost any Italian food.

It’s so big that a shuttle bus operates a continuous drop off service around the perimeter, saving tired legs. Alternatively, you can hire a specially designed tricycle to get around. Thankfully, maps help prevent you from getting lost! You can view and download a pdf map here. Map.

Starting outside, running around the building perimeter are two hectares of open-air cultivation and stables with many entrances or exit points. It has some 200 Italian rare-breed animals, including cattle, pigs, chickens, sheep, goats, horses, donkeys and bees. They are not just for show, being part of a breeding programme. Then there are 2,000 different plants including many native varieties of vines, fruit and olive trees. Stroll amongst them at your leisure. Like any garden, you’ll see different aspects depending on which season you visit.

Likewise, seasonality also extends within. For example, the autumn fungi and Truffle season and this year’s wine vintage were two highlights on my visit.

Then there are forty food factories on site to explore. Here you can witness base ingredients transformed, with demonstrations throughout the day.  There’s pasta, rice, coffee, cheese, meats, chocolate and much more besides.

Additionally, six different multi-media pavilions explore the links between Humans and their environment. There are also courses and masterclasses available, ranging in duration from an hour to several weeks. These cover topics ranging from pasta, beer and gelato making to wine tasting, bee-keeping and food photography.

This place is children friendly too, with a nursery and plenty of supervised play and games areas. Mind you, watching groups of children entranced by hi-tech robots making pasta is something else. It proves that the next generation is learning about the links between farm and fork too.

And of course, shopping, eating and drinking are great too!

The shopping is brilliant.

Of course, there are shops, stretching for over a kilometre. Each is unique, a feast for the eye as well as the stomach. Taste and buy pasta, wine, beer, oil, balsamic vinegar, cheese, charcuterie, fish and virtually everything else. Naturally, there’s a bookshop too. Cleverly, there’s no need to pay in each shop, as there are massive checkouts near the exits. 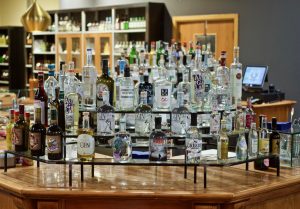 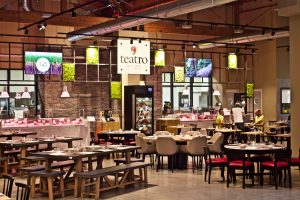 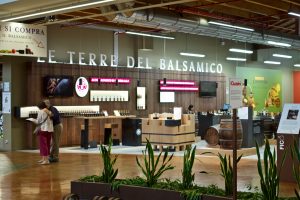 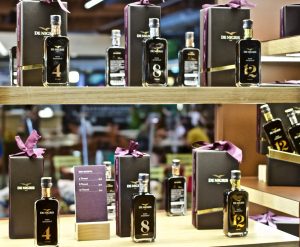 Not perfume, Balsamic Vinegar. At FICO 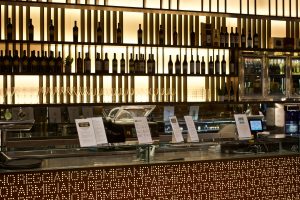 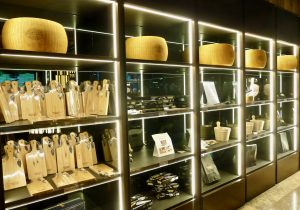 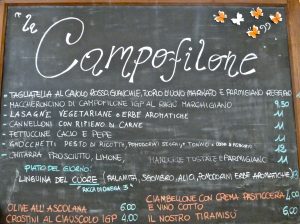 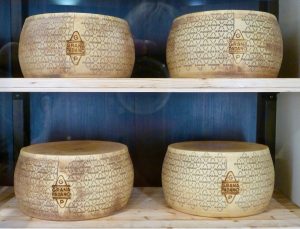 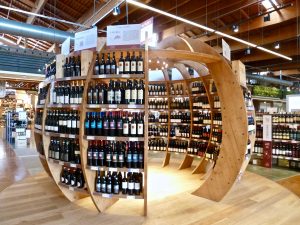 Do you want wine? At FICO 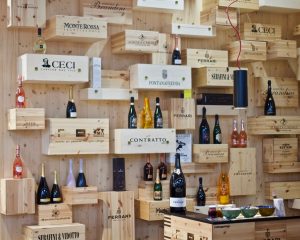 And what food and choice! There are forty-five different food outlets. These include trattorias, the Michelin-starred Amerigo, bistros, and street food pop-ups. With all this temptation, lunch and dinner is a must-do. Between these times, put your feet up and take a break with a dazzling range of wine, beer and coffee bars.

Inevitably, there have been criticisms about FICO, which is hardly in the Italian commercial tradition. One newspaper even ludicrously described it as a dystopian vision. Perhaps they’d never been to the Trafford Centre on a Saturday afternoon or encountered the dreariness of British fast food.

Granted, it’s competing with traditional Bolognese artisans and markets. However, central Bologna seems as busy and vibrant as ever. On balance, there seems plenty of room for both.

Furthermore, the purpose of FICO goes hand-in-hand with many of the ideals of the Slow Food movement. For example, sustainability, tradition and provenance. It’s also preserving the link between food production and consumption. To sum up, it’s essential to protect and renew these in a permanent place.

Bologna is known as La Grassa, the place that celebrates gastronomy like no other. Hence FICO for me is an inspiring and unique addition to the repertoire.

As a final observation, rarely have I seen so many people enjoying themselves. Surely that’s the essence of food and wine?

Getting to Eataly is easy!

For those driving, head for Ancona on the Bologna Tangenziale and take the signs. There’s plenty of cheap on-site parking.

Alternatively, take the shuttle bus from outside Bologna Centrale rail station. It runs every day from 9.30 am, every 30 minutes Monday to Friday. On Saturday, Sunday and holidays, it’s every 20 minutes. The journey takes 20 minutes and costs €7 return, with a 30% discount for Trenitalia rail passengers.