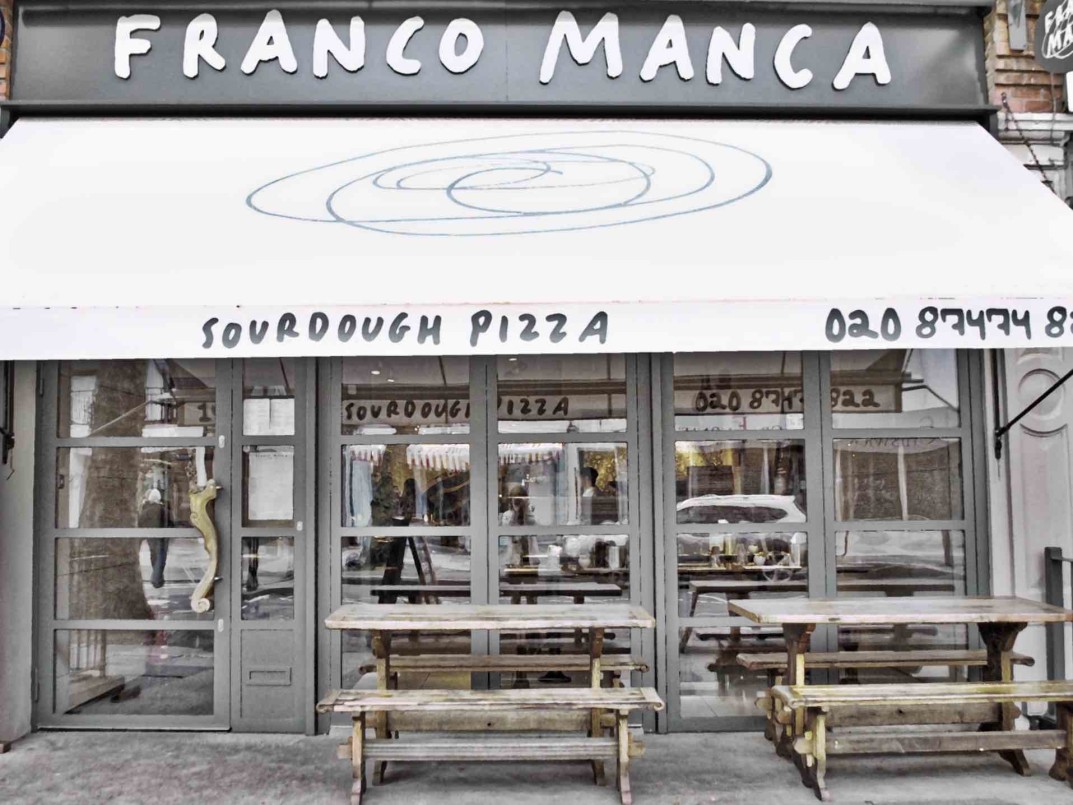 Where can you find great pizza? Originally from Napoli, Pizza has travelled the world as a street food staple. However, in doing so, it became much traduced. Napoli finally introduced a law protecting traditional pizza by specifying the ingredients and cooking methods. Fortunately, there is also great pizza in the UK. One such purveyor is Franco Manca. However, lovers of stuffed crusts and pineapple toppings should look away now.

Authentic pizza isn’t thick gunk laced with salt, sugar, and fat. Neither does it come with hundreds of ghastly toppings that offer everything from curry to chocolate. Yes, chocolate.

Its key is simplicity, using a wood-burning brick oven operating at around 500° C. That blast-cooks a pizza to perfection in forty seconds. The result will be thin, crisp at the edge (the crust is called cornicione), and gently charred.

Traditional toppings are best. Tomato, cheese, basil, oregano, garlic, capers, Salami, anchovies, olives, mushrooms, artichokes, rocket and seafood offer all the variations needed. A pizzaiolo is a connoisseur of pizza, looking for memorable experiences. At a smoky trattoria in Napoli;  an olive market in Nyons; outdoors in Tuscany; up the back of La Boqueria market in Barçelona, at Berbere in Bologna. Now I can add Franco Manca to that list.

Franco Manca started in Brixton in 2008 by Neapolitan expat Giuseppe Mascoli and Marco Parente. Back in 2009, Franco Manca had four branches in London. However, so successful have they been that they have expanded, first across London and now the UK.

The secret weapon at Franco Manca is their sourdough pizza bases. The flour is from Napoli, and the sourdough starter comes from a mother culture there that is 200 years old! The sourdough is left to rise for at least twenty hours beforehand.

The quality of all the other ingredients is also peerless, being organic and artisanal. For example, mozzarella is from British Buffalo herds; the Salami comes from Brindisi, ham from rare-breed Gloucester Old-Spot pigs. Even wild mushrooms are used, including Chanterelles when they are in season.

An authentic oven imported from Napoli forms the centrepiece at every branch. Well-scrubbed dining tables await while a friendly welcome and noisy guests add to an authentically Italian atmosphere. Take-away is available too.

There are just six main pizza choices, plus specials on the chalkboard. That’s enough choice. A regular Franco Manca pizza has tomato, garlic, oregano, capers, olives, mozzarella, and anchovies. The tomato-less pizza features ham, mozzarella, buffalo ricotta and wild mushrooms. All are generously in size and toppings, yet value priced.

Another surprise is the drinks menu, offering a selection of organic and biodynamic Italian wines imported directly. These are excellent and inexpensive, especially by restaurant and pub standards.

Indeed, prices mean you can afford to tip, which all goes to the staff.

The pizza arrives quickly, supplied with friendly, informal service and a bottle of olive oil. There are crisp crusts and light bases with charred blisters on the underside, buttery mozzarella, huge flavours. But, of course, being sourdough, you won’t feel like you’ve swallowed a Zeppelin afterwards. There are also several starters, salads, and desserts if you can manage them.

Consequently, I’ve tried valiantly to keep up as new branches have opened, finding a remarkable consistency of quality and service in them. A hugely enjoyable taste of Italy, Franco Manca is artisanal gourmet pizza at street food prices. They have rightly become tremendously successful. Expect queues at busy times as there’s no booking (except at Chiswick). I’ll be back again soon!