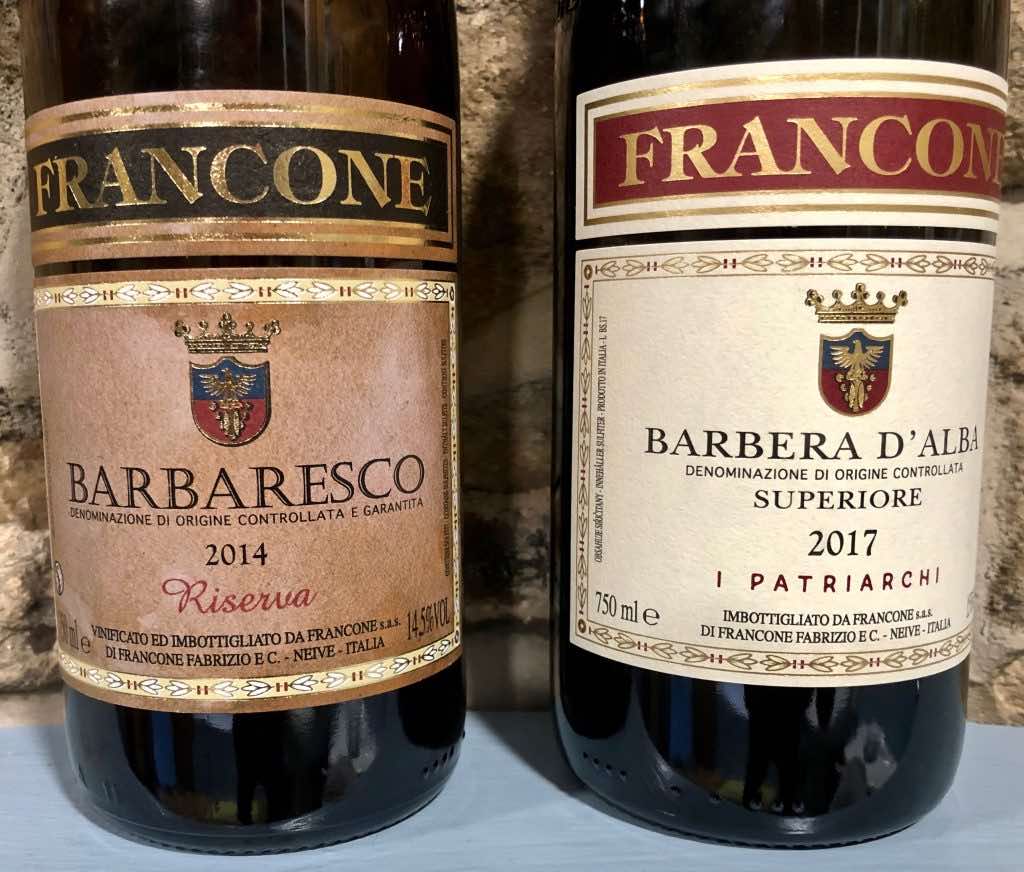 “The best way to arrive in Neive is to skirt the magnificent rows of Nebbiolo lining the road that leaves Alba and passes through Tre Stelle, then Barbaresco.” So wrote the founder of Slow Food, Carlo Petrini, in 1999. He went on to say, “Towards the end of summer, there is a stupendous array of Dolcetto, Barbera and Nebbiolo in a riot of colour that varies with the slope and its exposure to the warm Langhe sunshine.”  His description remains accurate today. So if you go that way, on the road more prosaically known as the SP3, you’ll pass the Cantina Francone winery. It’s just before you get to Neive, in the heartland of the prestigious Barbaresco DOCG. 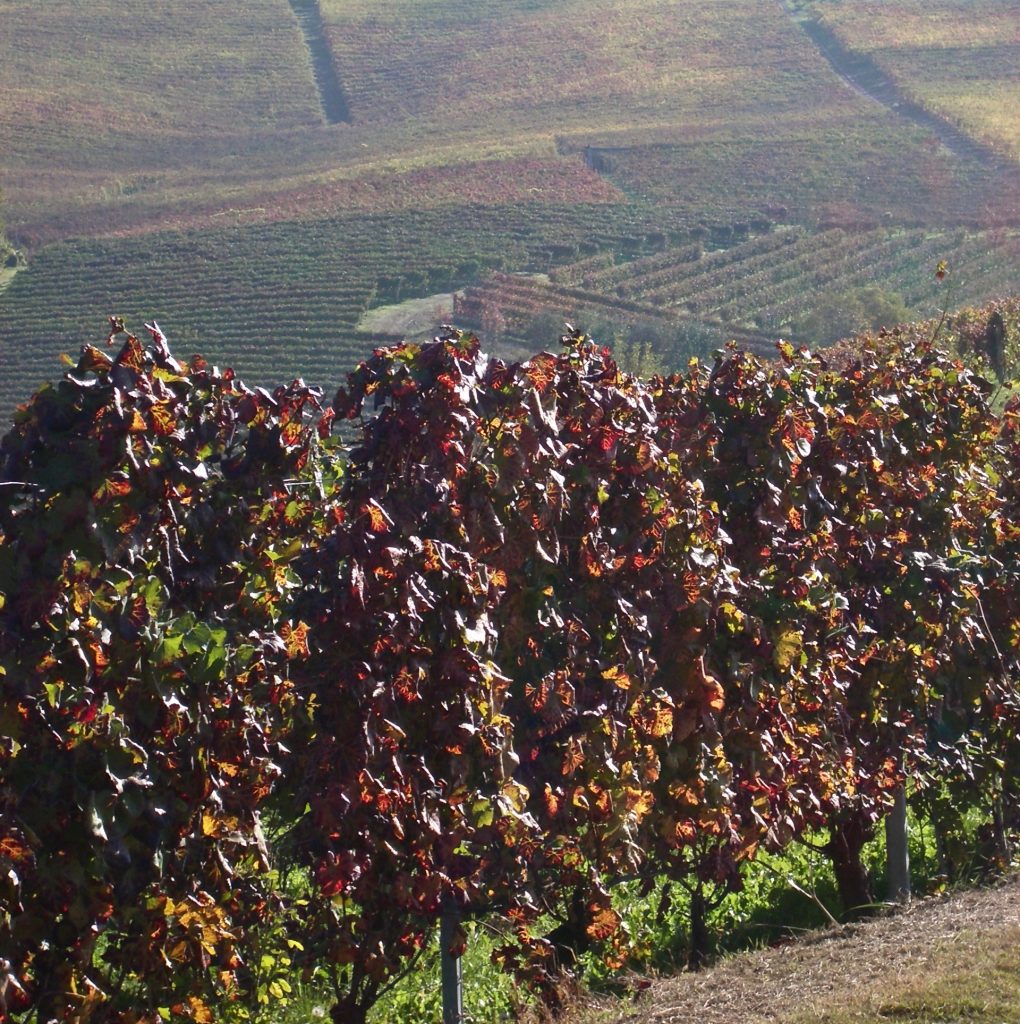 Barbaresco in the early Autumn sun

Icons of the Langhe

As well as Barbaresco DOCG wine, this is a land of other overlapping DOCs. It reflects that several different grape varieties thrive in the Langhe hills, each taking advantage of the specific aspects, slopes and soil types most suitable for it. Thankfully then, at least Piemonte has no IGPs!

However, this article focuses on two traditional and classic big reds from Neive that greatly contrast. The first is a Barbaresco Riserva DOCG. Then a Barbera d’Alba Superiore DOC follows. Cantina Francone made both of them.

These may both be big red wines from the same place, but they use contrasting grape varieties with markedly different characters. For example, the Barbaresco is 100% Nebbiolo, while the Barbera is 100% Barbera.

For this article, neither of these two well-known Italian grape varieties needs much introduction from me! Just remember that there’s never Barbera in Barbaresco, and you’ll be fine!

Meanwhile, to the casual observer, this place seems timeless. Yet since Carlo Petrini wrote those words about Barbaresco over twenty years ago, there have been changes. Often, these changes happen when new family generations take over, while wine styles alter too, particularly in the amount and type of oak in maturation. Furthermore, in 2014, there was the recognition of this landscape as a UNESCO World Heritage site. And to cap it all, there’s a growing climate emergency.

Perhaps these changes are all excellent reasons underlying the recent rise of the “Green Experience”, a sustainable viticulture movement in Piemonte, of which Cantina Francone is a member.

Neive is one of the I Borghi più Belli d’Italia, the most beautiful of Italian villages. It’s also known as the village of the four grapes (these being Nebbiolo, Barbera, Dolcetto and Moscato). The old centre huddles on a 300-metre high hilltop, a collision of the medieval and baroque, narrow streets, churches and palazzos. From there, the views across the vine-clad hills are stunningly romantic, whether in the summer sun, autumn fog or winter snow. 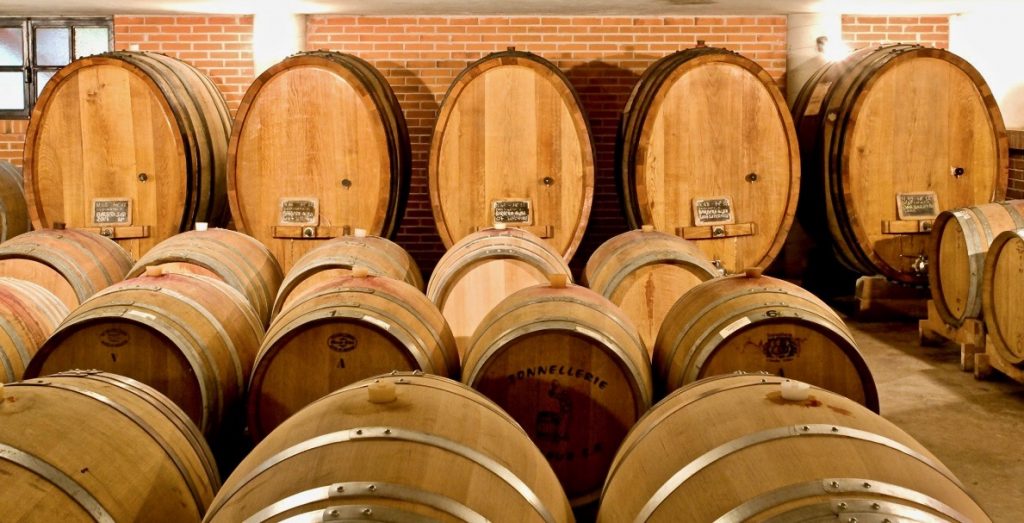 Today, brothers Marco and Fabrizio Francone have taken over running the family business. It goes back to the end of the nineteenth century, though the Neive winery originates from 1940. They aim to make wines that are “elegant and drinkable”, prized wine qualities that take skill to achieve consistently.

Their Barbaresco vineyards include the “cru” Gallina. They also have holdings in Barolo at La Morra and Monforte, and in Roero too.  Hence as well as the four varieties at Neive, they can boast smaller amounts of Pinot Nero, Friesa, Grignolino, Chardonnay, Arneis and Nascetta. Their wine range is suitably extensive: 21 wines, including Método Classico fizz, plus a Vino Chinato and Grappa!

While Cantina Francone isn’t organic, it’s a certified Green Experience member, the network that covers sustainable vineyard practices. The vineyards are also hand-tended, while in the winery, there’s a low-sulphite régime. Barrel use for maturation is a mixture of modern barrique and traditional large old casks.

The Barbaresco and Barbera wines are their mainstays. They come traditionally packaged and use Albeisa bottles, a design exclusive to wine producers in the Langhe. Since 2007, a lighter version now weighs 30% less than the original, reducing carbon footprints.

Barbaresco got their DOC in 1966, with a promotion to DOCG in 1980. Under the rules, all Barbaresco must be 100% Nebbiolo, which is well-known for its tannic content, complexity and aroma, just like its adjoining neighbour, Barolo.

A Barbaresco Riserva must have a minimum of fifty (50) months ageing, of which at least nine months must be in the barrel. This amount is slightly less than in Barolo (62 months minimum) but reflects the time needed to tame Nebbiolo’s tannins.

Francone’s example uses old-vine Nebbiolo given the Riserva treatment of 52 months ageing; firstly three years in a mix of barrique and big casks, then another 16 months in bottle.

Nebbiolo is never short of tannin, aroma or power, but it is renowned for its light colour, which here is pale garnet, now fading a little at the edges. The bouquet features sour cherry and red roses to the fore, with a welcome absence of overt wood effects.

Then comes an elegant mouthful, nicely knitted together. There are no hard edges here, though the tannins still bring some typical austerity. The fruit shows dried cranberries, sour cherry, and raspberry. Meantime, understated vanilla, tobacco and leather notes from the maturation add background complexity. This wine is drinking now but will improve over the next couple of years. I expect that it will last another decade or more.

The structure and complexity of the wine mean it will shine brightest as the centrepiece for any grand meal. The usual suspects are big roast meats and game, or anything with funghi, whether ceps or truffles.  Try Brasato al Barolo. It’s a pot-roast using Brisket and Barolo wine. Not only was this dish a luxurious match, but I also enjoyed the irony.

Barbera d’Alba Superiore may be a big red, but it’s a real contrast. Barbera d’Alba became a DOC in 1970. The minimum ageing for a Superiore is 12 months, of which there’s a mandatory minimum of four months in barrel. Hence for once, the designation Superiore is meaningful. Most Barbera d’Alba uses 100% Barbera, though the rules allow up to 15% Nebbiolo. The reason for that is that Barbera is well endowed with colour, fruit, acidity and alcohol, but lacks tannins. Hence adding Nebbiolo or using a wooden barrel can provide tannin. Fewer tannins also mean that Barbera doesn’t require such long maturation. Stylistically, Barbera can vary from simple, lightweight quaffers to solemn statements with overdone barrique treatment.

The Barbera here comes from two steep, south-facing vineyards at Neive, called Fausoni and San Christoforo. It gets the required 12 months maturation, part in the barrel and the rest in the bottle. That way, it picks up enough tannin for balance but without overwhelming the extrovert character of the grape variety.

I Patriarchi Superiore is a serious wine, but one where the use of wood has restraint, allowing the Barbera grape to speak clearly. It speaks loudly too!

It’s an intense ruby-purple, and the aromas include lilac and lavender as well as cherry. It’s completely dry, with potent alcohol at 15%, yet kept in balance because of the high acidity and fresh fruit sensations. Cherry and red berries are to the fore, and a touch of cinnamon spice and an attractive balsamic undertow. A long fade has none of the half-expected alcoholic heat. Instead, it finishes cleanly. It’s a relatively young wine and has plenty of edges and elbows, so typical of this grape variety, but it’s never rustic or clumsy. It’ll keep for a few years yet and mellow too. But really, now is the time to be drinking it while full of energy and life.

Barbera may be the very definition of drinkable, but again, this wine is best with food! It’s unbeatable with Salumi and cold cuts. For something more substantial, this recipe for Aubergine Parmigiana hits the spot.

Expectations of Piemontese wines are always high, given their reputation and price. Nevermore than for the twin icons, Barolo and Barbaresco. But other wines and grapes such as Barbera can play much more than just a supporting role, offering pleasure and authenticity at lower prices.

Which Francone wine to choose? The choice is yours. But I’d say both, please.

And if you like these, you’ll love this too.