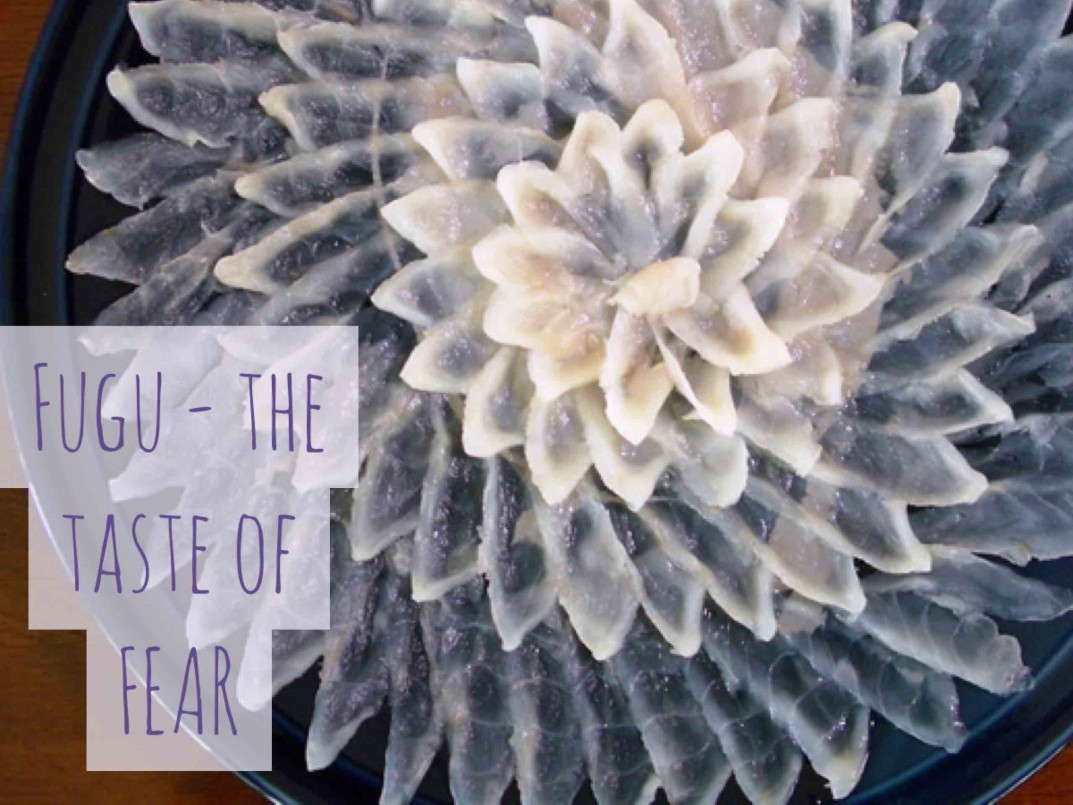 Fugu – the taste of fear

The eating of Fugu is dangerous dining. Fugu is a species of Japanese pufferfish. It is highly toxic, particularly in its skin and organs (the Fugu liver being the most toxic). One prick in the wrong place when preparing the fish will release its deadly cyanide neurotoxin, known as Tetrodotoxin (TTX). Death is a common outcome, and there is no antidote.

Fugu is revered in Japan and regarded as a great delicacy. Specially trained and accredited master chefs in Japan know how to prepare and serve this highly dangerous food – apparently, only one person has died in Japan in recent years! I do not find the mortality rate stats comforting.

Even cooking Fugu does not destroy the poison or its potency. Tetrodotoxin is said to be 1,200 times more lethal than potassium cyanide. Just two milligrammes is enough to kill you. That means that one decent-sized Fugu has the payload to kill thirty people. The toxin works by paralysing the muscles, yet allowing the victim to remain fully conscious. An initial numbing sensation on the lips spreads rapidly throughout the body. Shortly, you will not be able to speak or move, although you will remain fully conscious. Trapped inside your immobility, you will experience a zombie-like horror.

Death follows, through asphyxiation or heart failure. If you can keep breathing, you will have a chance of survival. Unsurprisingly, it is illegal to sell or prepare Fugu in the European Union (proof that EU food laws are quite sensible). In Japan, stringent laws govern the sale and preparation of Fugu. But it is also available to eat in Japanese restaurants in New York, which order their Fugu from Japan.

One Friday evening during a snowy New York winter I dated death. There were six of us dining on Fugu in a Japanese restaurant. Coincidentally, all of us were single. None was Japanese.

We joked beforehand that we had prepared our last will and testaments. My benefactors in the event of my imminent demise would be a friend and the local Cats Home. What were our motives for dining? Was it an insatiable curiosity, a rare novelty, boredom, or done just for kicks? None of us said we wanted to explore a Japanese cultural tradition. I remember stilted nervous conversations around the table.

Before serving the demon fish, we saw the preparation of Fugu. I expected the chef to be an old, venerable, zen-like master, but he possessed none of those qualities. However, he did have the steady hands and skill of a top surgeon. A few deft cuts with his knife (the Fugu Hiki) was all it took to dismember an ugly deflated fish, which was about eighteen inches or so long, bigger than I had expected.

The poisonous parts were pointed out with the end of his knife, having been put in a separate tray to avoid any contamination of the edible parts. The restaurant manager provided an additional translation. “He has trained many years in preparing Fugu in Tokyo”.  I kept thinking about the old Cluedo board game: “He did it, Itamae San, in the kitchen with the poisoned fish.”

The full name of the killer fish is called Torafugu, the Tiger Blowfish. There are other species of pufferfish, but this one is the most revered because it is the most deadly.

The flower of death

The fish came on a single large round plate, slivers of grey-pink sashimi arranged to resemble a chrysanthemum flower.” The flower of death”, our host helpfully pointed out, with a ritual bow. The raw flesh sliced so finely that it was translucent; through it, you could see an Eastern pattern embossed on the plate underneath. To me, it might as well have come served on a roulette wheel. We were then informed, in a hushed and reverential tone, that the Emperor of Japan is expressly forbidden to eat Fugu, for obvious reasons.

How did this great delicacy taste? No-one wanted to go first. I dithered, pouring sake for everyone as slowly as possible but eventually, I could delay no longer. Please, someone else go first, but I don’t want to be the coward that goes last.

The man sitting opposite me had the most faux-bravado. He looked at our hesitation before stuffing a complete piece in his mouth. Then he proceeded to chew slowly, eyes closed, clearly not enjoying the experience. Remaining alive, he swallowed loudly and theatrically. A broad smile then crossed his face – was this because of the sheer deliciousness of flavours? No, a pure relief.

Buoyed by my companions’ survival, I placed a small piece in my mouth. If you have eaten sashimi or even smoked salmon you’ll recognise the texture; raw, cold, slightly oily and very chewy, improved by soy sauce and wasabi. I realised after ten seconds or so that there were no lip-numbing sensations that might herald the onset of poisoning. Only a hot wasabi sauce improved the flavourless fish: that and the amount of hot sake I had already nervously consumed.

I had a bitter metallic taste in my mouth. It was fear. Adrenaline coursed through my veins. The woman next to me was sweating profusely, dark circles forming under the arms of her scarlet dress. Two of the diners made their excuses and left.

There was nothing else on the menu except more Fugu, served in different ways. I had completely lost my appetite after the initial adrenalin rush. I picked awkwardly at some Fugu chiri; This was unappealing pinkish cubes of Fugu boiled in water over a burner. I found this hard to swallow unless combined with rice.

Then came another dish that looked like a stew, but I do not recall its name. Finally, more hot Sake came with unidentifiable slivers to dip into it. Those were the Fugu fins.

Thankfully, the Sake had imparted a kind of warming bravado. Afterwards, without any ill effects and now buoyed by the alcohol, I departed on foot to my hotel. I wondered why I had paid so much money for the ordeal. I never saw any of the other guests again and presume they survived.

Fugu – the taste of fear

After all, it’s only the experience of terror that makes eating Fugu worthwhile. I now know the taste of fear. In comparison, standing naked on a window ledge at the top of a New York skyscraper would induce similar feelings and cost nothing.

On balance, no regrets. Walking back through the slushy NY streets, I bought Pretzels from a cart near Union Square. They were warm, chewy and comforting. And I felt wonderfully alive.

A story from my archives…August  2002