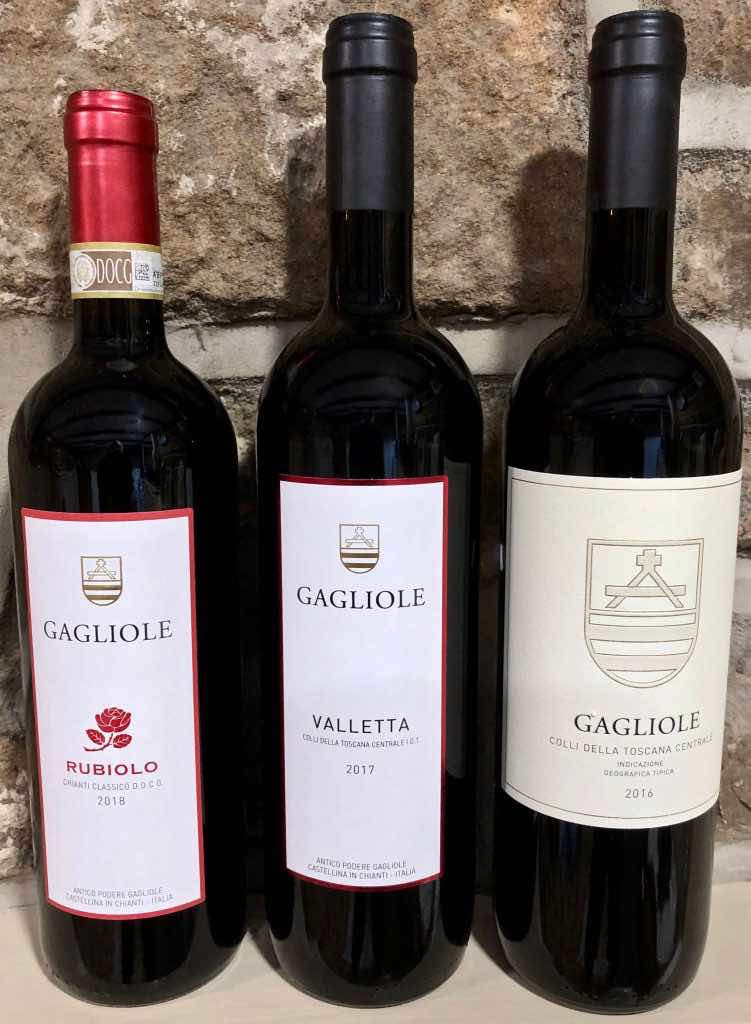 Gagliole is a winery based in the heart of Chianti Classico. It owns vineyards at two separate and distinctive locations. One is at Castellina, while the other is at Panzano, some 20 km further north on the Via Chiantigiana. This old scenic road links Florence with its historic and bitter rival, Siena. Now the SR222, this route takes in some of the most famous towns, villages, and wine producers of the Chianti Classico zone. Long considered one of the most enchanting roads in Italy, it remains the best way to explore Chiantishire.

And while the native Sangiovese grape rightly dominates here, the international varieties thrive and have gone native too. It means there are many possible expressions of red wine at vastly different price points. But regardless of composition or designation, the most exceptional examples are always those that evoke this landscape.

Furthermore, a hallmark of a great producer is that this element is present in every wine they make. In other words, their least expensive wine is as excellent and enjoyable within its context as the most costly. Achieving such objectives is no easy feat, but Gagliole endeavours to do so.

Monika and Thomas Bär-Bettschart have owned Gagliole since 1990. Their home is at the eponymous Gagliole, near Castellina-in-Chianti, tracing its roots to 994 AD! There are 10 hectares of ancient vineyard terraces here, their galestro* soils, planted with Sangiovese, Cabernet Sauvignon, and the white Malvasia Bianca.

The family bought the other part of the estate, known as “la Valletta”,  in Panzano, in 2011. There’s another 10 ha of vineyards on the edge of the famous Conca d’Oro, (the golden shell), which is one of the finest subzones in Classico. This location has Sangiovese, Merlot, and Cabernet Sauvignon. Here too, is a brand-new sustainable winery with geothermal and solar power and a luxury B&B. Since 2016, organic farming is across the entire estate, but the specific activities and their timings vary at each location according to local conditions.

The differences between the terroirs of Panzano and Castellina are advantageous because they enable Gagliole to offer seven wines, comprising two whites and five reds. In addition, there have been some recent changes in their winemaking, blending and reducing the amount of new oak. Is this a response to climate change, a change in winemaking philosophy, or because the vines are older? Regardless, these changes are beneficial in that Gagliole’s wines are now more redolent of their terroir. More tipicità, you might say. So, without further ado, here they are.

Rubiolo is Gagliole’s entry-level red, an “annata” wine, which is now 100% Sangiovese rather than a blend. Chianti Classico stipulates ageing for a minimum of 12 months. This 2018 gets ten months (half in older French oak and a half in cement tanks), plus a further three months in bottle, under a  DIAM cork.  In vintages before 2017, this wine had 5-10% Merlot added. Its absence means, in my opinion, a better expression of Classico, one that relies only on the Sangiovese blended from both the Panzano and Castellina sites.

A mid-ruby colour, correctly light coloured, there are predominantly welcoming aromas of sour cherry. The palate is fresh and rounded, with a level of acidity that complements the ripe cherry and red berry fruit and tannins well. As it opens up in the glass, there’s an interesting balsamic note, while a long finish reveals hints of orange and bergamot. Already drinking well, another few months will bring it to peak, and I imagine it’ll hold for four or five years.

Drink this wine young while fresh and exuberant; it’s a hearty mouthful evocative of the Chiantigiana.  Rubiolo is at The Oxford Wine Company for £19.99.

Salumi with Chianti Classico is always an excellent choice. However, baked pasta like Lasagne is exceptional, thanks partly to the acidity of the wine with the Béchamel sauce.

Valletta provides a sharp contrast in that it’s a 50/50 blend of Sangiovese and Merlot.  The Sangiovese is from Castellina, while the Merlot is from Panzano.  This wine definitely should be decanted or poured carefully – there is sediment waiting, so take care.

The Sangiovese ferments in stainless steel, while the Merlot ferments in French oak barriques. Both components then age for 14 months in French barriques (50% new). After blending, there are another six months in the bottle. The Merlot here isn’t that bland international caricature that too often drowns out authenticity.

On the contrary, its contribution is complementary as it brings additional complexity, whether that be a little deeper colour, some ripe plum fruit and a rose-like aroma. There’s the addition of some star anise, tobacco and graphite-like minerality too. That complements Sangiovese’s acidity and red fruits, resulting in a balanced and seamless blend. Neither is the barrel work heavy-handed either – a little coffee and cocoa in the mix are all.

Valletta is still young and will develop more complexity over the next four or five years.  It’s a more “serious” expression for mid-term drinking.  It’s €25.00 from the winery and £28.48 in the UK at Independent Wine.

Valletta reminded me of a Tuscan Sunday lunch held outdoors with Italian friends. Beef Carpaccio was on the menu, as were roast meats. They’ll work particularly nicely.

This Supertuscan is the flagship wine, 98% Sangiovese with just a 2% splash of Cabernet Sauvignon. This cuvée gets (and warrants) star treatment. First, there’s whole bunch fermentation in wood, partly in large oval barrels, partly in barrique. There’s then maturation for 18 months in French oak, of which only 20% is new, before another six months in the bottle.

The Cabernet Sauvignon component is intriguing, as, before 2015, it was usually 10%. Also, the oak treatment has reduced too, for example, from using 70% new wood. The result leaves the wine being much more Tuscan, using Sangiovese to interpret the Panzano terroir.

Built for the mid-long term, decanting for 30 minutes before serving is worthwhile, as it’s still relatively young, but there is no sediment. A mid-ruby colour, the aromas are sour cherry and bergamot, with a little coffee. The fruit on the palate is more than ripe red cherry; there’s mulberry or loganberry too. Did I imagine a brief cassis note? Instead, there’s fresh acidity, a mineral undertow,  and polished tannins without rough edges. There’s no alcoholic fumes or burn, just a delightful slow fade. Gagliole Rosso is an exquisite full-bodied wine that deserves the name Supertuscan. It’s drinking remarkably well already and has a decade or more ahead.

This wine is € 40.00 from the winery or £37.06 in the UK at Independent Wine. And while that kind of money means this is perhaps a wine for a special occasion, many of its peer group cost two or three times the price.

Pairing simple food with complex wine is often a good idea, and so it was here. A recipe for Borlotti beans by River Café in London was a brilliant platform to allow the wine to shine. Aged hard cheeses, in this case, Lincolnshire Poacher Cheddar, also works well.

Given that the family are Swiss, it’s no surprise that Switzerland and northern continental Europe are key export markets for Gagliole. Fortunately, their wines get to the UK too, though here they are still a well-kept secret!

The other wines in the Gagliole range are excellent too. They include Gallule, (a Chianti Classico DOCG Riserva, 100% Sangiovese from Castellina), and Pecchia, (a 100% Sangiovese IGT only from Panzano made only in the best years). I hope to contrast this pair of wines sometime in the future. Meanwhile, the three wines featured here are all highly recommended.

* Galestro is crumbly loose schist from metamorphic clay. Free draining and nutrient-poor, so ideal for vines. It’s one of the famous soils of Classico.