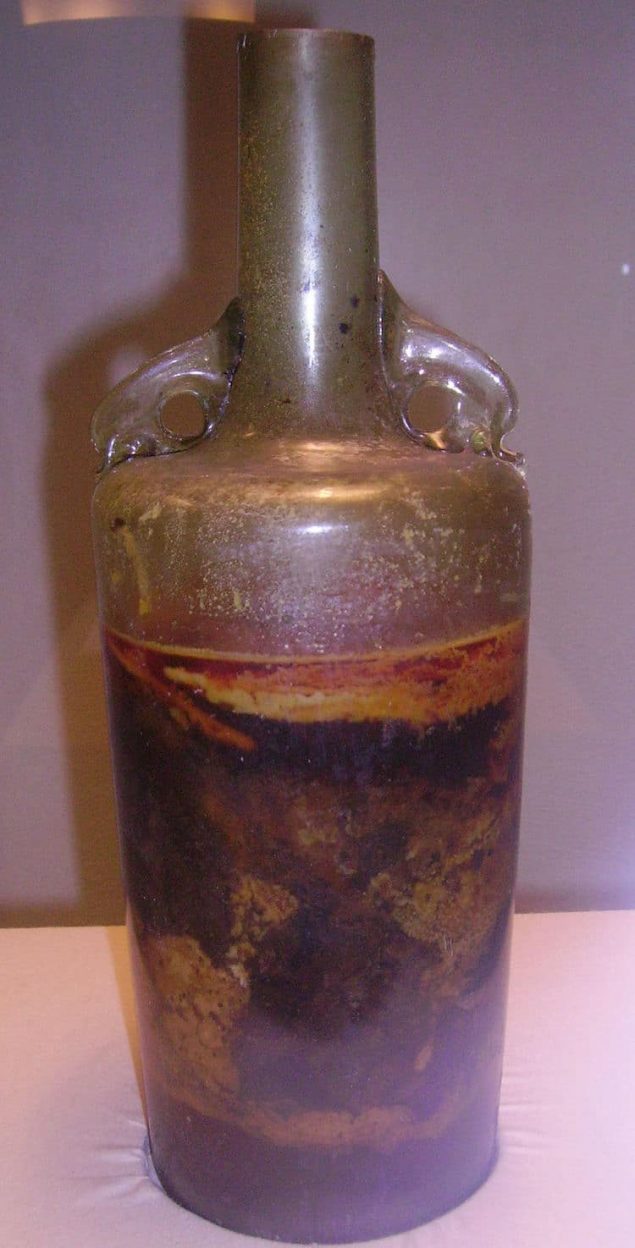 Volcanic activity produces obsidian, a natural form of glass. It can also form by lightning or meteorite strikes.

The first glass to be human-manufactured was in Egypt, around 3100 BC.  Syria, Mesopotamia, and Egypt were all glassmaking hubs by 1500 BC.

The first written glassmaking instructions were in 650 BC, kept in Ashurbanipal’s Libary in Ninevah (in modern-day Iraq). Ashurbanipal was the last and greatest King of the Assyrian empire, then the largest and most powerful empire the world had ever seen. This library was also the first one ever.

From what is now present-day Lebanon, the Phoenicians spread glass artefacts and knowledge around the Mediterranean sea. By 100 BC, the Romans had invented glass-blowing, popularised glass windows and made vast numbers of bottles, drinking glasses and other vessels, both for ceremonial and everyday purposes.

The oldest unopened glass bottle of wine that still contains a liquid is the Speyer wine bottle. It dates back to the fourth century, dated between 325 – 359 AD. The bottle was in a Roman legionary’s tomb at Speyer, a Roman town in the Palatinate in Germany. What type of wine this bottle contained remains unknown, but in the picture above, it doesn’t look too appealing.

There are remains of Anglo-Saxon glass-making furnaces at York and Glastonbury. Also, there is evidence of glassmaking in Kent, Jarrow, Barking Abbey, Gloucester and Lincoln.  Bede also documented English glassmaking.  The Romans influenced Anglo-Saxon glassmaking, but the results were generally less refined and much rarer. In an early form of recycling, Anglo-Saxon glass often used broken Roman glass!

Laws once forbade Venetian glassmakers from leaving the city in a vain attempt to keep their skills and secrets. Murano remains famous for its glass to this day.

The British courtier, diplomat and natural philosopher Sir Kenelm Digby invented the modern-day wine bottle in the 1630s. His onion-shaped glass bottle had a punt for extra strength, ideal for Champagne and sparkling wines.

While Englishman George Ravenscroft didn’t invent clear glass (aka flint glass or lead crystal), he improved clarity and robustness with an English patent in 1674. Within twenty years, there were over 100 flint glassmakers in England.

The industrial revolution meant that Britain was the world-leading glass manufacturer. By 1850, the largest glassmaking town in Britain was Castleford in Yorkshire.

The first mass-produced glass bottles were from Castleford in 1887.

Gaffer is the name of the Chief glassblower. This word then became widespread slang for Boss.

A glass-blower blows air into a gob of molten glass. Hence someone with a loud mouth may be “gobby” or told to “shut your gob.”

The writer Daphne du Maurier was a descendent from a French Huguenot family of eighteenth-century glass-blowers. She wrote about them in her 1963 historical novel The Glass-Blowers.

Glass Blowing was a reserved occupation during the First World War. Glass blowing was crucial to the war effort. Consequently, glassblowing employees could not join military service, whether by conscription or volunteering.

The Window Tax was a property tax based on the number of windows in a house, introduced by William III (William of Orange). It became a significant social, cultural, and architectural force in England, France, and Ireland during the eighteenth and nineteenth centuries. The larger the house, the more windows, so the more likely the owner was to be wealthy. To avoid or reduce the tax, some places from that period have bricked-up windows. The tax in England, Wales and Ireland was from 1696-1851. In France, it ran from 1798-1926, and in Scotland, from 1748-1798. The saying “daylight robbery” may derive from the imposition of this tax.

The colour of glass bottles

Glass colour comes from natural colourants or impurities. Tiny quantities of various oxides create different colours, and the higher the amount, the deeper the colour. Amber is from iron and sulphur oxides. Green is from chrome oxide and blue from cobalt oxide.

Cristal Champagne is always in a clear flint glass bottle that has no punt.  The reason is that Cristal was initially for the Russian Tsars. Hence the bottle was a deliberate design to prevent Tsar Alexander II’s assassination. It stopped hiding a bomb inside or underneath the bottle. Though he survived the attempts of 1866, 1879 and 1880, assassins were successful in 1881.

Most aspects of the modern world are unthinkable without glass. To conclude, here are a few glass facts from our everyday lives. For instance, glass packaging for food, cosmetics and pharmaceuticals. Optics for spectacles, microscopes, telescopes, and cameras. Lightbulbs, glazing or scientific and laboratory equipment. TV and computer screens, smartphones and fibre-optics. Skyscrapers, conservatories and greenhouses. Car windscreens and aeroplane windows. Cookware and tableware. Solar panels, windows and mirrors.

Glass is indeed a wonder material!

P.S., those three articles about glass wine bottles have many more glass facts and are here, here and here.