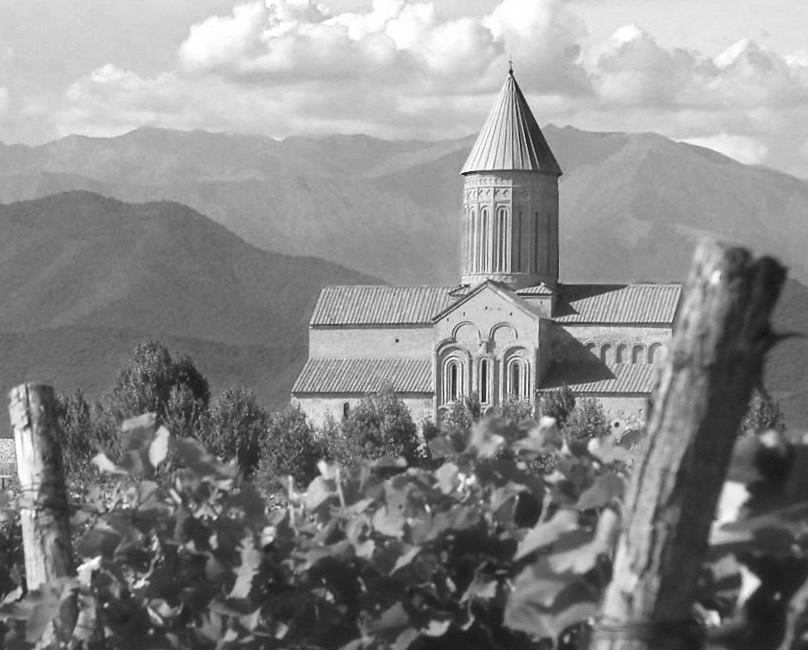 Following on from Part 1, about the wines of Georgia, Gvino is the word for wine in Georgian. This Part 2 has a baker’s dozen, selected from those available in the UK. I’ve grouped these firstly into those Gvino made “conventionally” and then those made in traditional Qvevri. With white, rosé, orange/amber and red wines, there’s something here for everybody. Stockists and prices included.

Sparkling Rosé, Traditional Method using the Tavkeri grape variety and with 36 months on the lees. Bagrationi was founded in Tbilisi in 1882 by Georgian Prince Ivan Bagrationi-Mukhraneli. Nearby Kartli is the biggest region for fizz, rooted in the method used to make Champagne that came with Russian émigrés in the nineteenth century. This pink boudoir example is nicely dry, with aromas of roses. Strawberry, cranberry and raspberry flavours and a hint of something akin to marshmallow on the finish. Gentle pressing avoids the transmission of tannins. It makes for an excellent apéritif, or try it with oilier fish like mackerel, sardines, salmon or gravadlax. Good value too. Turton Wines £18.41 and Georgian Wine Society £16.99

Crisp, dry white wine made from Rkatsiteli by Tbilvino. Light lemon and floral aromas. Peach and apricot flavours with fresh acidity.  Conventionally made in temperature-controlled stainless steel. A typical Rkatsiteli, still the world’s third-most planted grape variety. An ideal partner for chicken and fish. Tbilvino was founded 1962, privately owned since 1998 and based in the capital, Tbilisi. It sources all grapes from growers, employs international flying winemakers and makes around 40 different wines, producing a massive 7.5 million bottles per year, including examples using Qvevri. Georgian Wine Society £9.99

The 40-hectare Chandrebi vineyard is on the right bank of the Alazani River in Kakheti. Giorgi Sulkanishvilli is the founder of Orovela. His family had owned the vineyard before Soviet rule, so he re-acquired it when the land was re-privatised and began replanting to modern standards. The wine is made by Lado Uzunashvili using modern viticulture and vinification. Orovela is the name of a traditional ploughing song.

This Saperavi is in a modern conventional style, given 12 months maturation in 20% French oak and  80% US oak. 10% of this new. Now at ten years old, it still looks young, the colour a lively purple, with further keeping potential over a decade or more. Initially, it’s not especially aromatic but lifted floral notes develop; Parma violets. On the palate, there are hints of green leaf backing mulberry, blackberry and plum fruit, with hints of nutmeg and vanilla. While the wine has seen oak ageing, the oak influence is supportive, not dominant. There’s a terrific balance between zippy acidity and mature tannins.  Creamy texture and a smoky, dusty finish. Food: grilled meats in a Mediterranean style such as Lamb. Waitrose, £16.80

This semi-sweet red is a 50/50 blend of Alexandrouli and Mujuretuli grapes from the SVA Khvanchkara in Racha-Lechkhumi. Made conventionally by Tbilvino, Khvanchkara was reputedly the favourite wine of Uncle Joe Stalin and as such served at his terrifying banquets.  Alexandrouli brings extra acidity to balance Mujuretuli’s high sugars. Super-mature late harvest grapes are picked in October/November and then fermented at 28°C in stainless steel tanks. The fermentation is artificially stopped by chilling.  Tinned strawberry and raspberry fruit. High acidity means the mid-palate is sweet, but then there’s a much drier finish, with a hint of caramel and dusty tannins. Best gently chilled; as an aperitif, or as a dessert wine with a light chocolate mousse or blue cheese. Unexpectedly, rice pudding is a great dessert match!   Georgian Wine Society £17.99

Yes, the clue is in the name, part of this wine is made in Qvevri and matures in them for 2-3 months, before blending with conventionally produced Rkatsiteli. Firstly, it’s a gentle introduction to orange/amber wine, as it carries forward some of that character in the blend. Secondly, it’s a way of producing sufficient orange wine to stock supermarket shelves. It’s lightly orange coloured, bone dry and with some tannins from skin contact in the Qvevri. Flavours of quince and pear, with plenty of fresh acids and a hint of something savoury like tea and beeswax before a more-ish finish. You can’t say it’s a natural wine, as some of this blend is conventional, with sulphites to act as a stabiliser.

However, you know when natural wines are causing a stir in the wine market when supermarkets start stocking them. Well done, Tbilvino, who have made a challenging style in an “easier” commercial way.

Sharply priced too. Newbies to the orange/amber style should start here. If you find you don’t like the style, which isn’t for everybody, then don’t proceed to try white wines made “fully natural.” PS, don’t overchill it as that will reduce the fruit flavour and increase the tannic quality – that’s true of nearly all orange/amber wines, 14°C is enough. Marks and Spencer £10.00

Iago Bitarishvili has two hectares of fifty-year-old Chinuri vines near Tbilisi and only works with this grape variety. Made entirely in Qvevri, some of which are 300 years old, this is fully “natural”, being organic and 3-6 months in Qvevri for fermentation and maturation. No sulphites, no fining or filtering. Far more intensity and tannins here, and a slight haze. Best decanted for an hour before serving. Bone dry, some mouth pucker from the tannins leavened by spiced pear fruit. A good clean example where there’s still some detectable fruit flavour and minerality. Used in MW tasting exams in 2019, should have been easy to spot. Les Caves de Pyrene £17.60

John Okurashvili has 4.5 hectares of organic red and white grape varieties in the foothills of the Caucasus, with some high up at 850 metres. For the Mtsvane white variety, he leaves 50% of the stems in Qvevri, so the result is not short of tannic intensity. Qvevri maturation on the skins, stalks and pips takes around 16 months. Deep amber colour, this wine pushes the natural envelope. There’s little fruit here. Instead, there’s funk and spices. No sulphur, fining or filtering, so decant it an hour before serving or shake the bottle for a fully cloudy experience. Hence it’s pretty hard-core, for the natural wine brigade. Food is essential; pork with fermented foods seem apt – sauerkraut, choucroute and kimchi. Les Caves de Pyrene  £20.60

American John Wurdeman has become a legendary winemaker in Georgia and something of a cult figure in natural wine circles. His winery, Pheasant’s Tears, has a range of orange/amber and red gvino. All are natural, being organic, without sulphur, no fining, no filtering. Hence all push the boundaries of what wine can be. While I’ve enjoyed some of his bottles in the past, this example of Mtsvane isn’t one of them. Here’s an interesting question, at least intellectually – when does a natural wine become faulty? In one sense, measured by “conventional” standards, many are, and it would be easy to put this wine in that bracket. By natural standards, massive astringent tannins, reductive funky notes, and a lot of sediment aren’t unusual.

However, what I find unacceptable is the extreme bottle variation. Of five bottles opened at the same time, one was excellent, with almonds, dried apricot and a slightly sherried note. Two were acceptable, despite huge mercaptan smells (dirty dishcloth, rotten cabbage) that swirled off to leave some bruised apple flavour. Two others took mercaptan stink to new heights, with eggy hydrogen sulphide that refused to swirl away. Moreover, the best bottle had little sediment, while the two worst examples contained little else. I can accept natural winemaking, and natural wine diehards and idealogues will doubtless defend it. However, I can’t condone such variation in quality, especially at this price.

Usually, I wouldn’t include a wine such as this in a review, but this lottery needs pointing out. It seems to me that if a wine’s first duty is to refresh, you have a one in five chance of success with this gvino, though other Pheasant’s Tears wines encountered have not suffered in the same way. Les Caves de Pyrene  £18.60

The Aladusturi grape is often used in a blend or made as a Rosé, and its name means “permitted by Allah”. It’s a gvino that’s relatively low in alcohol and very light in colour and body. Nevertheless, this tiny producer, with just one hectare of vines, makes this distinctive red. It ferments for two weeks in Qvevri before being racked off for a further four months is a different Qvevri. A delicate grape, it produces this delicate red, one best opened just before serving. Not particularly aromatic, but full-flavoured, with tannic red raspberries and rosehips with a hint of almond on the finish and a welcome lack of funk. A different expression, be warned that this wine oxidises and falls apart in the glass after 20-30 minutes. However, until that point, it’s hugely enjoyable. Les Caves de Pyrene  £18.60

Iberielli’s Saperavi is a brilliant example of how good natural wine can be. For want of a better simile, if the Orovela above is most like a Cabernet, then this one is more like a Pinot Noir. Though the winery and most of the vines are in western Guria on the Black Sea, the Saperavi comes from vineyards in eastern Kakheti. This gvino has a delightful raspberry perfume, and the elegant style features fruits of the forest.

The Saperavi is destemmed to avoid excessive tannins and ferments and matures in Qvevri with minimal sulphur. There’s no fining or filtering, but no funky notes either – just clean, pure fruit, superb balance and a long finish. Exceptional in every way and will doubtless improve if kept. Les Caves de Pyrene  £21.60

Budeshuri is a Sapereravi, but a biotype that has white rather than red juice, so the red colour is from the skins. Another exceptional red wine carefully made and matured in Qvevri. Highly aromatic, there are violets, cherry, blackberry and blackcurrant undercut with almonds and a little salinity.  Excellent wine and neither is it the hardcore experience that their amber/orange Mtsvane is. Easily recommended. Les Caves de Pyrene £21.60

Saperavi grapes come from the Kondoli vineyard and ferment with natural yeasts in Qvevri at Telavi Wine Cellar. It ferments slowly at just 22°C, along with all the skins, pips and stems. Then left for two months before being racked into French oak barrels for maturation. Here it spends 24 months before bottling unfiltered and then rested for another six months before release.

This dry red gvino is a deep red colour, with a lighter bricky rim. The nose has some vanilla oak and concentrated dark berry aromas. Tannins are mouth coating, followed by blackcurrant and liquorice notes. Ready to drink now but will age for decades. Consequently, it’s worth decanting this wine for an hour beforehand to open it up and remove any sediment. Telavi Marani Wine Cellar dated from 1915 and became a Soviet bulk winery. Back in private ownership with modern methods, it’s also preserved Qvevri production. Georgian Wine Society £24.99

Have you tried Georgian Gvino? Let me know your thoughts when you do.