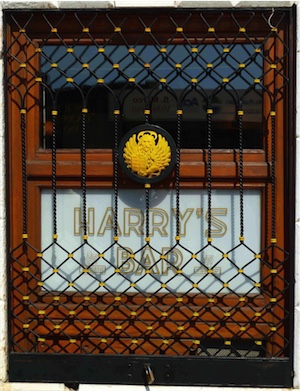 Harry’s Bar in Venice. After Hemingway and Moorcock

“The Cipriani family ran Harry’s Bar in Venice for 81 years. Many of the great and the good graced the tables at Harry’s Bar, which invented the Bellini cocktail and Carpaccio. Ernest Hemingway had his table in the corner as a regular patron. He made frequent reference to it in his book, Across the River and Into the Trees. Other famous patrons included Noel Coward, Truman Capote, Orson Welles, Woody Allen, Winston Churchill, Jan Morris and Henry Fonda”.  The Independent

Jerry Cornelius sat in Harry’s Bar at a corner table. He faced the entrance so he could see Catherine coming in. Others were coming in now. They blinked as their eyes adjusted to the interior light. The bartender nodded at them and started to wipe the counter down again. He wanted a bar of his own.

On the wall above Jerry’s head hung a picture of Harlequin and Columbine taken at the Carnival. He folded up the copy of Corriere della Sella and made room for two new Bellini’s.

All this reminded Jerry of rowing down the Canale Grande with Catherine. She had complained about forgetting the sunscreen and how far away the Lido di Jesolo was. Now he could not remember why it reminded him of that. A Gondola made Jerry feel like a man in a way the Vaporetto never would.

She does not see the fear in me, Jerry thought. His eyes were lowered but undefeated. He studied the glass in front of him, thinking about his novel. Jerry would completely rewrite it in the morning. He wanted to write timeless stories of love and cruelty and loss.

They never came out that way. Remember, no matter how little you want to, you must always rewrite in the morning. Even though it is fiction, I will weigh every word to make it seem truer than true, he thought.

He was still thinking when she came in, lightly. Wearing the Prada shoes that cost more than a day’s worth of Bellini’s. The spiked heels made her tread as a tightrope walker would. She sat next to him at the round table and held his hand, not speaking.

Jerry sipped from his glass. I have known better, he thought, but this Bellini is cold and good and delivers its message. It tastes sweet, which is how it should be when you are with someone you love.

“This is what we have, isn’t it?” Catherine said as she reached for her glass and looked at the picture.

He held her hand, and now they drank Martinis. He thought about her and whether she would ruin him. Jerry thought she was very beautiful. He hadn’t meant to fall in love with her.

Jerry hoped he would find out what she meant. Catherine squeezed his hand, and they sat. They were never lonely or afraid when they were together.

Catherine turned to him. “Let’s go outside now. We will watch the sunset over San Georgio Maggiore as if it were the last, best and one true sunset.”

Jerry asked for the bill. It was long.

“I don’t care that you don’t have any money today. Drink your fill and pay me when you do,” said the bartender.

“You are a good Venetian”.

Afterwards, they went back to Harry’s Bar.

As the bells tolled loud and clear in the Calle Vallaresso, Catherine pushed at the door. They would order Bellini’s and eat. Jerry liked the idea of fighting with his food. Tonight he needed Marlin Tartare and Carpaccio alla Cipriani.

Their table was ready.

Next stop: try an Aperol Spritz at Osteria Bancogiro in Venice.

Try this recipe for a classic Bellini