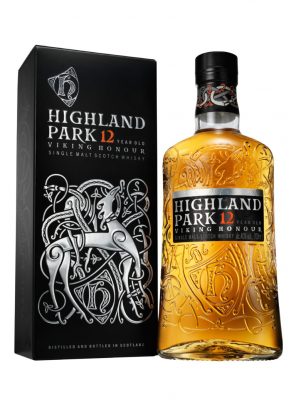 Orkney comprises over 70 mostly low-lying, virtually treeless islands. Located where the North Sea meets the Atlantic, it’s wild, wet, and windy – kept habitable by the Gulf Stream. These islands have been settled for over 5,000 years, shown by the preserved remains of Skara Brae village. Orkney was a Viking stronghold (featuring the fearsome Eirik Bloodaxe), and the islands were Norse until they passed to the Scottish Kings in 1472. You’ll find the Highland Park distillery at Kirkwall, a Cathedral city with a population of just 8,500 souls.

Magnus Eunson founded Highland Park in 1798. Allegedly he was a wily smuggler of illicit distilled spirits, but everything was legal by 1818. Hence Highland Park is one of the oldest producers as well as being the Northern-most whisky distillery.

As with so many malts, Highland Park was sold to be blended with other whiskies to produce, for example, Famous Grouse. It wasn’t until 1979 that their 12-year-old Single Malt appeared. Its resounding success has been led to a range of even older releases.

There are two particular influences on the final taste. The first is the local Orkney peat. Different in character to peat found elsewhere; it imparts a highly phenolic quality to the local barley during malting. The second influence is the maturation, only in ex-Sherry casks made of Spanish and American Oak, with American Bourbon casks never used.

Also known as Viking Honour, the colour of Highland Park 12 yo is mid-amber. There is a highly aromatic smoky nose with heather, sherry and dried apple notes all showing through at different times. The palate shows a fruit peel and dried fruit flavours and has a rounded texture. The mid-palate is slightly sweet and ends in a long, powerful and smooth finish that’s drying rather than burning. This round and relatively mild character make it a good all-rounder.

Robert Burns wrote, “Wi’ usquebae, we’ll face the devil!” Use it to warm up after a bracing winter walk or kick back after a bad day at the office. On the other hand. It’s a perfect nightcap and is good with match food too. Haggis works, but try Wild Smoked Salmon when there are lashings of Horseradish available. Sashimi with wasabi is also good.

Unusually, I prefer to take Highland Park neat rather than add the usual splash of spring water. However, the choice is yours.

If you like this, then try Talisker from the Isle of Skye, or Caol Isla from Islay.