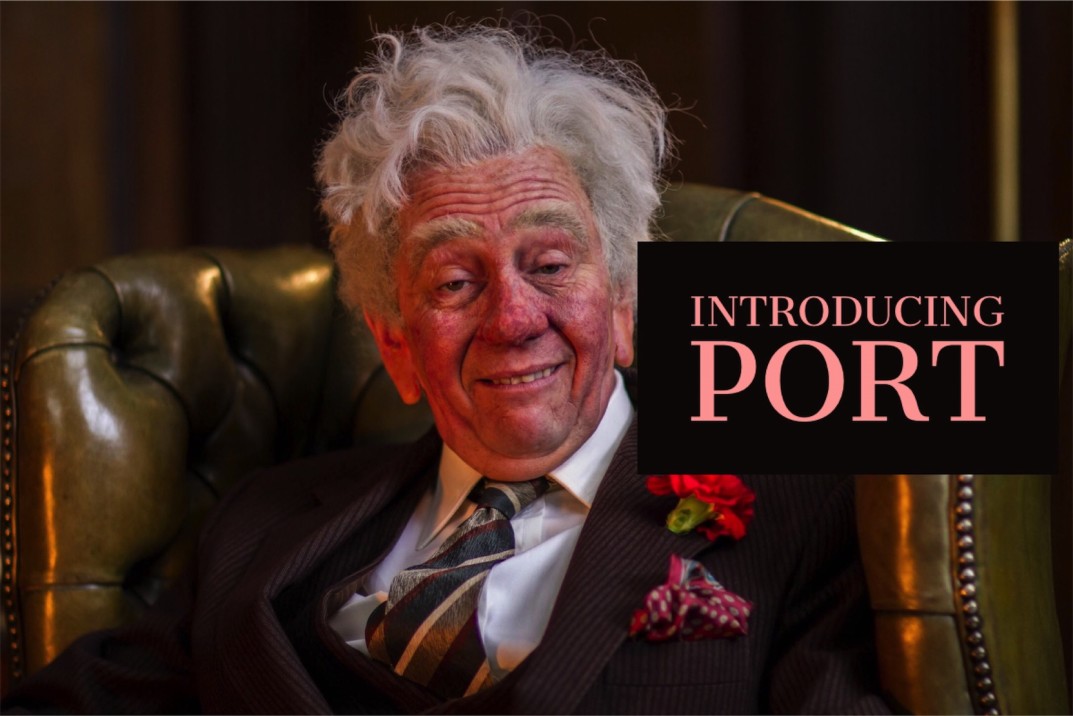 Introducing Port – it’s not one drink

Arguably, Port is one of those quintessential British drinks, yet its various guises can be confusing. It’s often associated only with Christmas or Rowley Birkin QC. It deserves better than that. Port is a category rather than one drink. Introducing Port is my summary of the styles, with some examples to try.

Port is only from a demarcated area in Portugal’s northeastern Douro Valley, though many other regions have copied its process. The key to all Port is fortification and maturation. These create a variety of different styles.

The town of Oporto lends Port its name, where the river Douro meets the Atlantic. The vineyards lie some fifty miles and more upriver. The vineyards inhabit an inhospitable landscape of steep hills, thin soils and extreme summer heat. 90% of the land has a gradient steeper than one in three. Hence the vineyards are made of terraces hacked out by hand over a period of more than 300 years. More recently, dynamite and bulldozers are employed. As a result, this part of the Douro valley looks like a giant staircase. Now a World Heritage site, it’s one of the most beautiful and dramatic wine landscapes.

British history and tradition are fundamental to Port. Because of almost constant Anglo-French antagonism, Britain turned to Portugal; as a staunch ally and to slake its thirst for full and sweet red wines. In 1678, the English discovered a monastery in the Duoro that was fortifying red wine with Brandy. Such treatment made the wines richer and more alcoholic. They were ideal for long sea journeys. Eventually, this “blackstrap” was refined and became Port.

Port is also the oldest geographically demarcated wine region in the world. In 1756, laws were introduced to protect the wine from adulteration and fraud. By then, merchants controlled the trade and were investing in vineyards (known as quintas), a situation that remains to this day. Many of these shippers were British. Merchants also came from other seafaring nations including Portugal, Holland, Spain, Germany and Norway. They have created a range of styles to suit the local palates of various export markets.

Port wine is usually a blend, of grape varieties, of vineyards and vintages. These combine into a consistent house style. There are eighty authorised grape varieties, many of which are Portuguese natives. The top five red grapes used are Tinta Barroca, Touriga Naçional, Touriga Franca, Tinta Cão and Tinta Roriz.

Given the steep and narrow terraces, most grapes are hand-picked. Until the 1960s all grapes were trodden by human feet in shallow stone troughs called Lagares. Since then, mechanisation and electricity are now available and widely used. However, expensive foot-treading still creates the top Ports, still the best way to extract colour and tannins.

Fermentation of the grape juice stops after only 24-36 hours by the addition of 77% pure grape spirit. This fortification leaves the wine sweet and raises the alcohol level to around 20%, creating a young Port; fiery, tannic, clumsy and completely undrinkable! Port needs taming by long maturation.

The wine is taken down the river to the shipper’s lodges at Vila Nova de Gaia. This small town faces Oporto on the opposing river bank. Before the damming of the Douro and modern roads were built this was a perilous river journey. The cooler and more humid conditions in Vila Nova allow time and transformation long before air-conditioning became available upriver.

Fundamental to the Port style made is the decision on how the wine ages. It’s a choice between glass bottles or old wooden casks, or some combination. Maturation affects the style and the price. Let’s take a look at some of the types of Port.

Ruby is the vast majority of Port produced. It is a youthful and fiery red port that is relatively inexpensive, simple and made for immediate drinking. These are blended non-vintage wines. They mature in a variety of old wooden casks, cement tanks and stainless steel for about three years. Then they are fined,  filtered and bottled. They usually carry a shippers or supermarket brand name and will not develop any further.

A far superior version to look for is Premium Ruby Port, with a proportion of older wines included. These offer deeper colour, more complexity and depth. Usually labelled as “Reserve“, they make for a far more satisfying and exciting drink for little extra outlay.

White Port follows a similar journey to the Ruby and Premium Ruby. Except it uses white grapes such as Verdelho, Malvasia, Codega and Rabigato. The best examples are aged exclusively in wood for deeper colour and nutty flavours. They also come in a range of sweetnesses, from Seco (these taste off-dry), to the intensely sweet and viscous Lágrima. White Port makes for a good apéritive or makes a refreshing longer drink when chilled with tonic or lemonade. They don’t age further.

Krohn Porto Branco Seco, NV. 20% abv.  Wiese and Krohn were two Norwegians that shipped Port to Scandinavia in exchange for salted fish. Today it is owned by the Portuguese Falcão Carneiro family. This example is about as dry as it gets. Taurus Wines, £11.99

Aged Tawny offers a step-change up in quality, a blended red wine aged in wooden casks for lengthy periods. Over time these wines gently oxidise, exchanging their red colour for deepening shades of amber-brown. The style depends on the time spent in the wood and the original quality of the wine used. Expect nuts, dried fruits and citrus flavours with a satisfying smoothness. As they age, they get more delicate, rarer and more expensive. The indicated age, (10, 20, 30 and over 40 years), is an average, as the wine is always a blend of older and younger wines. The older the wines used, the more expensive they become.

Warre’s Otima 10-year-old Tawny Port, 20%. From the oldest British-owned Port shipper, established in 1670, now owned by the Symington family. Try it with Sushi – an unusual but cracking combination. Waitrose, £11.99.

Colheita is a Vintage Tawny, made from a single year. The label shows the date of the harvest and the time of the bottling. Do beware of so-called “Fine Tawny”. That’s a nasty cheap wine; either a mix of young Ruby and White Port or a Ruby subjected to heat to accelerate its ageing. Those will show no age date on the label and not much interest in the glass either.

Niepoort Coheita 1995, 20%. Niepoort is of Dutch origins, dating back to 1842. Dirk Niepoort is one of the world’s most innovative winemakers, and this is one of the best examples. Valvona & Crolla offer a half bottle for £24.95.

Vintage is the most expensive style of red Port. It’s the one that commands all the attention, being the Shipper’s flagship wine. They last for decades, even centuries. These are the pinnacle of quality and account for less than 1% of all Port made. Vintage is made solely from the best grapes of a single harvest, hence the age date. Given that each year is unique, it’s only the outstanding years which are “declared” by the individual producer.

However, a declaration is only possible when the shipper is confident that there is both market demand and high quality. So it’s a personal decision, made on average perhaps three times in a decade. That does mean some outstanding years don’t get declared!

Vintage maturation is completely different. The wine is bottled from wood early; at only two years old. Maturation then takes place very slowly in the bottle over decades. So it throws a thick sediment and needs decanting. Rarely released before aged ten, most go on maturing and can be drunk from around their twentieth year. These almost indestructible wines reward the patient and the wealthy with unsurpassed elegance and finesse.

Taylor’s Vintage Port, 1985. 20.5% abv. There were only three Port vintages declared by Taylor’s in the 80’s. 1985 was the last and most exceptional of all. In fact, Taylor’s was the outstanding Port made in 1985 – the best of the very best, rare and unique. Fiery, intense and heady, that is its character. But there is also richness, inner beauty and an incredible elegance that will last for decades. My favourite Port ever. The Wine Society £75.00

LBV stands for Late Bottled Vintage. It was created to convey some Vintage character but without the wait and expense. It’s a wine made from a single harvest year but bottled much later than Vintage. Typically at age six rather than at age two. Because of the extra time in wood, they are ready to drink earlier. That’s because they’ve thrown most of their sediment before bottling. If filtered they can also be enjoyed without decanting. However, the best LBVs to look out for are unfiltered and given another three years ageing in bottle. Those get nearer to Vintage in expression.

Niepoort, LBV, 2005. 20% abv. While Taylor’s invented LBV, Dirk Niepoort’s are legendary. Best decanted, unlike most LBV it is capable of further development over the next decade. Dark chocolate or Blue cheese heaven. A handy half-bottle (37.5 cl) is £11.49 at Martinez.

SQVs are red ports made from the grapes of a single harvest. Unlike Vintage, they only use those the grapes from a single estate. These wines focus on a shippers’ best property. Made in good rather than outstanding years, they are usually less expensive than Vintage. In all other respects, production and maturation are just like Vintage. So they can develop for many years and will again need decanting. In short, SQV offers the essence of Vintage but from lesser undeclared vintage years. However, the best examples rival full Vintage in quality, but at more affordable prices.

Crusted Port gets its name from the sediment that forms in the bottle as it ages. In this sense, it resembles a Vintage, and it will need decanting. But that’s where the similarity ends. In reality, it’s an unfiltered Ruby, which does give it more complexity. It spends up to four years in cask and a minimum three in bottle before release. Warning: despite the date on the label, this is NOT the vintage date, it’s a bottling date. The wine is a blend of different vintages! Nevertheless, there are some good examples, and it makes an alternative to LBV.

The Wine Society’s own-brand Exhibition Crusted Port bottled 2007 20% abv is produced for them by Taylor’s and is a splendid example. £13.95.

That Port can be one of the world’s greatest wines is beyond doubt. I hope that this article helps you explore its diversity and select the style you prefer most.

As for Rowley Birkin, he was very, very drunk.

An earlier version of this article previously appeared in ON Magazine, called “The Story of Port”.

If you enjoyed this article, then check out the story of Sherry here.