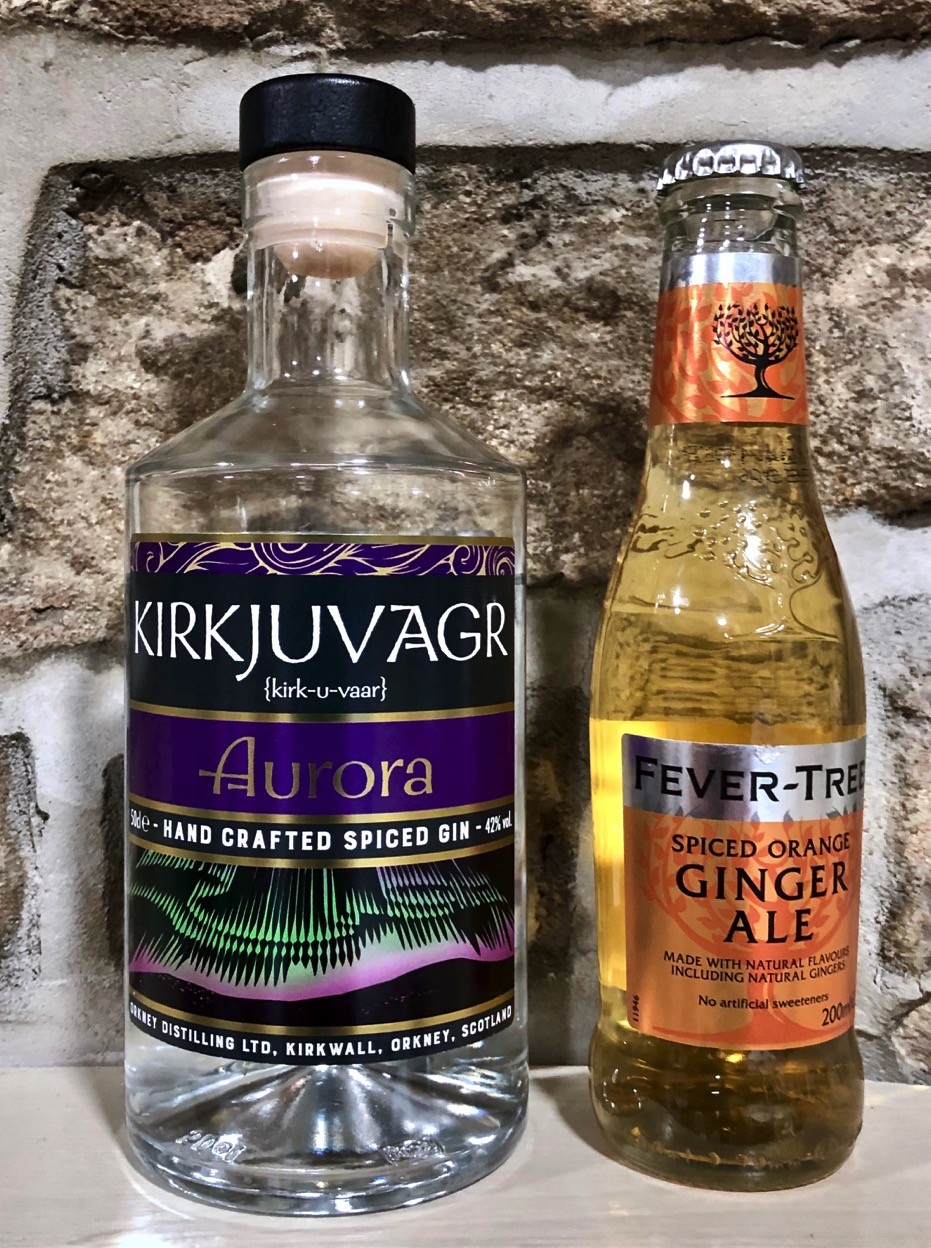 Kirkjuvagr Aurora – a Gin made for Winter

When the current gin boom began some ten years ago, few would have wagered that it would still be continuing unabated today. Now there are more than 300 gin distilleries in the UK, double that of five years ago. This growth is due to the many new small artisan brands which major on premium quality and stylish packaging. Kirkjuvagr (pronounced kirk-u-vaar) from Orkney in Scotland is one of these. Their Aurora is a gin with a clear sense of place deliberately created for winter warmth.

Visiting Orkney in late summer revealed a magical archipelago. It comprises some seventy islands, with twenty of them inhabited. The largest is the Mainland, with the compact “capital” of Kirkwall. Kirkwall’s name is from Kirkjuvagr in Old Norse, meaning the Church in the Bay. 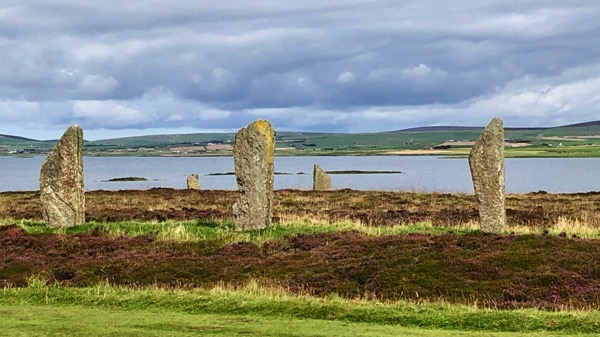 Orkney has much to recommend it.  Settled since Neolithic times 8,000 years ago, the famous UNESCO World Heritage Sites of Skara Brae, Maes Howe, Stenness and the Ring of Brodgar are a must-see. These are enough reason to go to Orkney but are far from the only historical attractions.

There are Viking settlements, a Norwegian Cathedral (Orkney was part of Norway until 1468), and of course the famous Scapa Flow anchorage of both World Wars.

A sense of place

Orkney is also a place of great natural beauty. It’s an unspoiled haven of quiet lochs, wild coastlines, picturesque islands, fishing harbours and fertile farmlands. The quality of light here has long attracted artists, the famous Old Man of Hoy is a mecca for climbers, as is Scapa Flow for divers. 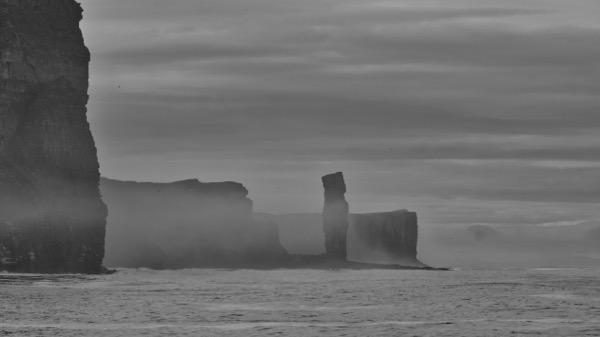 Orkney: The Old Man of Hoy

The climate of Orkney is surprisingly mild for a place so far north, thanks to the influence of the Gulf Stream. Weather-wise, always expect four seasons in one day.  In summer, the high latitude means long days, with twilight rather than complete darkness. In contrast, winter has long dark starry nights when the Northern Lights (Aurora Borealis) can make an appearance.

Hence the Orcadians are rightfully proud of their land, now voted the best place to live in the UK in 2019 by the Halifax Quality of Life Survey.

And drinks? There are those great whiskies made by Highland Park, and Scapa, plus beer from the Orkney Brewing Company.

Craft vinegar is from the amazing Orkney Craft Vinegar.

And there’s gin and vodka too, thanks to three more distilleries: the Orkney Gin Company, Deerness and Kirkjuvagr.

Kirjuvagr was launched in 2016 by Orkney Distilling Ltd. For the past year, its permanent home has been in Kirkwall, on the harbour front. In a brand new building, they make five diverse gin expressions, each with a different botanical mix.  Now they are part of a project to use renewable hydrogen to heat their copper stills rather than burn fossil fuels – this innovation will be a world first. 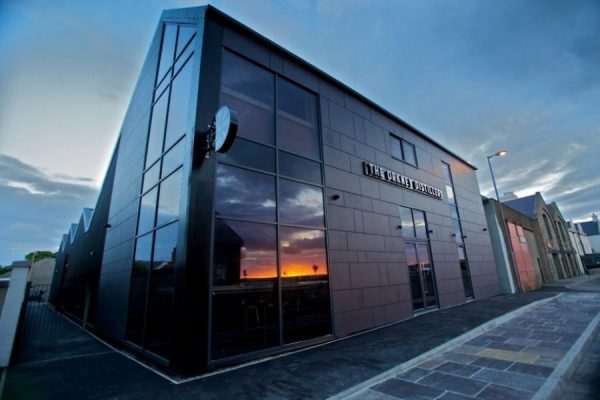 The botanicals used here feature locally sourced Ramanas and Burnet roses, and borage flowers as well as the essential juniper. They also include calamondin, a type of orange from the Philippines, unlikely to grow well in Orkney’s climate! However, there’s also wild Angelica, said to have been brought to Orkney by the Vikings. Uniquely, they also use traditional Orkney Bere Barley in their recipe, which may also have Viking origins. This ancient cereal is probably the oldest type still in continuous cultivation. Once widely grown in northern Scotland, it now survives mostly on Orkney.

Of the five gins, Kirkjuvagr (Origin), is their classic mainline, while Ark-Angell is a robust 57%, ideal for a Martini. Bayla is an “Old Tom” sweet style with honey and raspberries, while Harpa is their summer gin, juniper-led. All are good, but Aurora stands out, a spiced gin made to suit long winter nights.

With winter now fast approaching, it’s an ideal time to try Aurora for yourself.

Aurora is 42% in strength. The botanical recipe adds a blend of spices such as ground cinnamon, nutmeg, whole cloves and pink and black peppercorns. Aurora is dry and starts with sweet orange and cinnamon before transforming to a warming spicy finish. All the while, there are aromas of herbs, earthy juniper and a hint of vanilla. This combination makes Aurora distinctive and memorable; in flavour, complexity and personality. It received a Great Taste Award in 2019 from the Guild of Fine Food.

Unusually, the best matching mixer is Fevertree Spiced Orange Ginger Ale. This powerful and tangy mixer brings out the nuances in Aurora and complements it with a slightly bittersweet, almost Aperol -like flavour. Usually served with a dark spirit such as rum, this ginger ale is suited to this particular gin, though it could overwhelm a lighter or less intense gin style.

Just serve the Aurora and Ginger Ale in a sizeable rounded wine glass, adding plenty of ice, and garnish with a cinnamon stick and a slice of dried orange.

Now all you need is a dark and blustery winter evening with the rain pattering on the windows. There are plenty of those on the way, so draw the curtains, stoke up the fire, and sink into a comfy chair.

Drink Kirkjuvagr Aurora this winter, perhaps while planning a trip to Orkney.

Orkney Distilling sells Aurora in 50 cl bottles for £27.99. Alternatively, try stockists like Master of Malt, for £23.95.