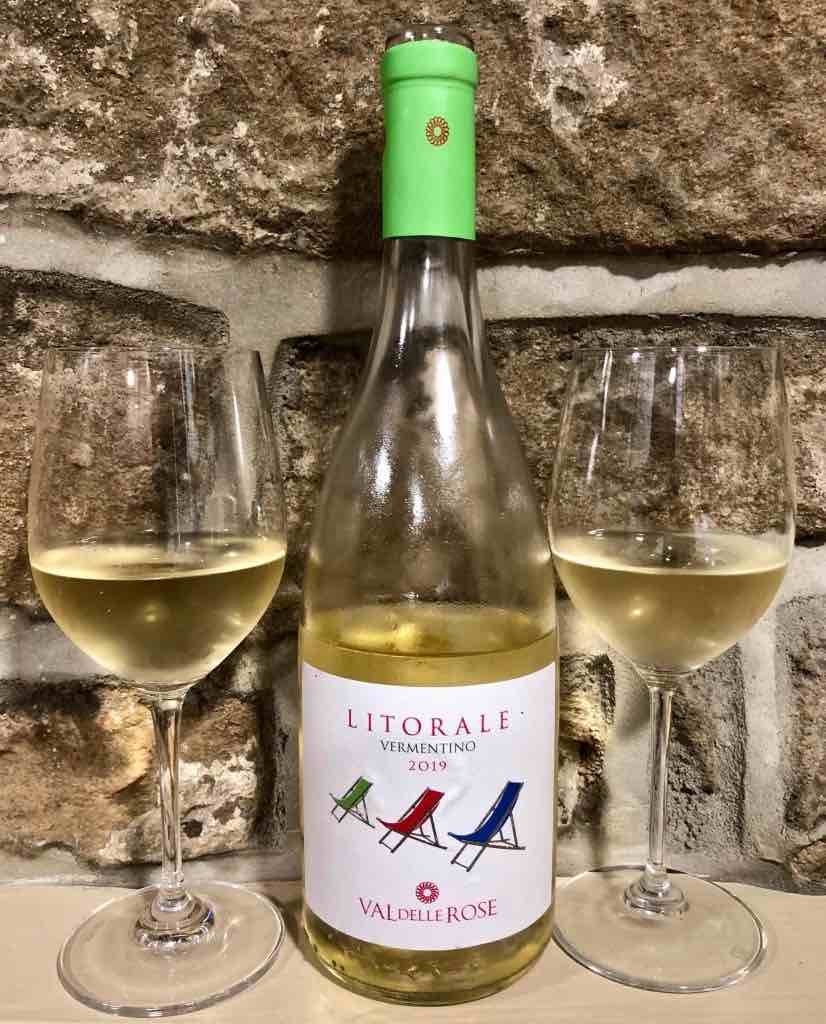 I recently joined a great online wine tasting presented by Andrea Cecchi. His family wine roots date back to 1893, and they bought their first property in the sixties, Villa Cerna in Castellina, Tuscany. However, Cecchi’s enterprise has grown significantly. They now have three other Tuscan estates (another in Chianti Classico, San Gimignano and Scansano), and one in Umbria’s Montefalco. Perhaps it was because of the perverse rarity of a sunny British August day, but the wine that initially caught my eye was white. So here’s Litorale, a 100% Vermentino from their Val Delle Rose estate in the heart of Morellino di Scansano DOCG.

I think of the Vermentino grape variety as being rather like a tourist craving a Mediterranean beach holiday. It loves sun and heat and thrives best in coastal locations. Hence it grows in a coastal arc around the Med, from Provence in France through Italy’s Liguria to Tuscany. It’s also an important grape of the islands of Corsica and Sardinia. Vermentino is happy in poor soils and is tolerant of wind, salt and drought. Even when grown at sea level, it maintains its lively acidity and aromatics. It’s an all-rounder, too – while the dominant style is for crisp young dry whites, it can age well, respond to oak maturation, make sparkling and sweet wines and be an admirable blending partner.

Tuscany embodies the recent commercial success of Vermentino. Maybe that’s because Tuscany is famous for red wines and has lacked an equivalent white of the same stature. Partly too because the Tuscan coast’s vineyard lands are relatively new territory for winegrowing, without long-held traditions and so with looser rules. Hence, in the vineyards that stretch right along the Tuscan coast, Vermentino has proven to be particularly suitable and successful.

Litorale is an apt name. Littoral is a geographical description of the tidal coastal zone that extends from the beach down to the nearshore. Indeed, in Latin, the word litus means shore. With its three deckchairs, the wine label sums up exactly what this wine is all about; stylish carefree relaxation.

Cecchi bought the Val Delle Rose in 1996. The estate is in Tuscany’s deep south, near the towns of Grosetto and Scansano.

There were originally 25 hectares of vines, now expanded to 100 hectares, with a further 85 ha rented, feeding a modern hi-tech winery and visitor centre. Farming is organic, with certification due in 2021. Naturally, most of the estate is for Sangiovese, the key ingredient of Morellino di Scansano DOCG. However, at 150 metres altitude, there are three Vermentino vineyards, of which Litorale is one, classified as Maremma Toscana DOC.

The Vermentino grapes ferment in stainless steel. Afterwards, the wine stays on its lees for three months, regularly stirred to keep the lees in suspension and pick up more flavour and complexity. After bottling under cork, the wine matures for another three months before release. Hence it sees no oak, revealing authentic varietal character. There are, on average, 90,000 bottles made per year.

It’s a straw yellow colour, with broom flower and acacia aromatics. In the glass, there’s excellent racy acidity which balances grapefruit and pithy lemon. Cut with a moreish salinity, a long dry almond finish follows. If, like me, you can’t get to a Mediterranean beach right now, then this wine will conjure memories and sustain you until you can. And don’t restrict yourself to drinking it only on summer days. At any time, it’s like bringing a vase of fresh, bright flowers into your house.

Drink this wine now and through to the next vintage release, though it will last a couple of years. It’s apt that the 2020 harvest of Litorale started on the same day that I’ve written this article!

If you want to find an authentic Vermentino that’s excellent value, start here. So, on with the Factor 50 and swim-shorts. Feel the sand between your toes and take a paddle in the sea. Now, where did I put my sunglasses and deckchair?

Vermentino is versatile with food, or drink it on its own. Unsurprisingly, seafood and fish are the usual suspects, maybe a simple plate of grilled sardines or some whitebait. But, for me, it’s Spaghetti alla Vongole tonight!

The UK Stockist is Noble Grape, sharply priced at £12.99