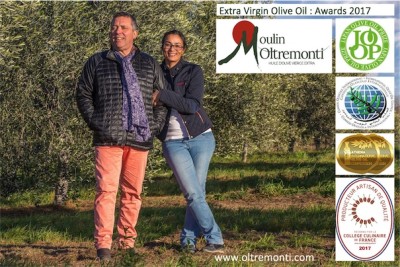 I love Extra-Virgin Olive Oil, (or EVOO for short). However, I knew little about making it and less about how to taste it. Losing my Extra-Virginity was overdue. Hence I visited Domaine Oltremonti recently.

Oltremonti is near Bastia, in northern Corsica, between the wild high Maquis and the coast. The Domaine has 35 ha of organically farmed trees, and it’s own olive mill making about 30,000 litres of olive oil per year. Emilie Berta-Borel and her husband Ivo own it, and he is also the Miller. It’s an attractive setting amidst green hills covered with vineyards, oaks and poplars. It was a revelation.

Indeed as someone who professes to know something about wine, comparing and contrasting olive oil and wine, two staples of the Mediterranean diet, was fascinating. There are many similarities and also many differences.

A little bit of background on olive oil

But first, a few words on olive oil in general. Olive oil, like other vegetable oils, is a liquid fat. It has many uses besides cooking; in cosmetics, pharmaceuticals, engineering lubricants and fuel. Each olive tree can produce between 10 and 40 Kg of olives each year, depending on its age, cultivar and method of farming. The olive is a stone fruit like a cherry. Though olive trees produce fruit every year, the tree naturally produces a larger harvest every two years.

The cultivation of olive trees around the Mediterranean dates back to at least the 8th Century BC, and there is archaeological evidence for olive oil in 6000 BC. Its popularity spread around the Med from the middle-east. Olive trees are now found in similar climates worldwide, e.g. in the Americas, Australia, New Zealand and even Japan. There are some 1,350 different cultivars.

The different varieties and terroirs mean that, like wine, there are many possible flavours, textures and quality levels. The health benefits of olive oil over other fats are also well known. The regulation of olive oil is by the International Olive Oil Council, who set grading and processing standards. However, the market value of olive oil means that there have been adulterous fraud scandals from time immemorial. A New Yorker article by Tom Mueller entitled Slippery Business is a great read for those interested in such topics. In Europe, EVOO is often PDO (Protected Designation of Origin) as a guarantee of authenticity, in a similar way to many wines and other foods.

Olive oil comes in various quality grades, but the finest is EVOO, made for culinary use. The flavour and aromas of these prestigious oils are particularly distinctive, yet vary considerably. Hence choosing an EVOO can be similar to selecting wine. The biggest production is from Italy, Spain and Greece, though most Mediterranean countries produce it, including France.

Most olive oil is extracted in big industrial refineries, using chemical solvents, heat and high pressure. Not EVOO. EVOO is the premium, the Grand Cru, if you like, being pure unrefined juice. Small artisanal producers often make the best examples.

It was time to find out more. Domaine Oltremonti proved to be the perfect place to learn.

Let’s start with the olive trees. The cultivar at Oltremonti is Ghjermana or Germaine in French. It’s a close relative of Tuscany’s famous Frantoïo. Oltremonti’s trees are organic, kept small for hand-farming.

The trees flower in May. During June to September, a dusting of natural kaolin (china clay) deters the olive fruit fly pest. It temporarily turns them as white as snow.

The harvest usually commences in early October as the olives ripen, indicated when they start to turn from green to black. Nets laid beneath the trees catch the fallers. It’s vital that there is no soil contact, as this increases the acidity in the olives and adds off-tastes. Acidity in olive oil, as we shall see, is the enemy. 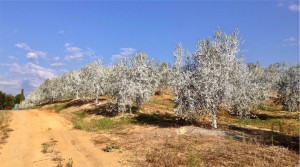 The olives now need milling quickly, before they oxidise. Oltremonti’s mill contains the latest technology. Forget the romantic image of millstones powered by straw-hatted Donkeys. Indeed, there are no grinding stones or presses used here. The ancient system could take weeks, whereas their mill can process 1,800 Kg per hour. Speed and mechanisation preserve flavour and consistency. It’s also much more efficient.

Firstly, the olives need separating from any leaves or branches. Now washing removes any other contaminants. A machine then crushes the whole olives and their stones into a paste. The stones are beneficial because they contain anti-oxidants and make oil separation easier. Unlike grape pips, olive stones contain no harsh tannins. This paste is then kneaded rather like a dough for 30-60 minutes in a process called malaxing. Malaxing collects all the droplets of oil together and lets natural olive enzymes add additional flavour.

It’s down to the Miller’s skill to decide on the optimal malaxing time. It’s a balancing act, as the Miller needs to get a generous amount of oil while retaining flavour without oxidation and each batch is different. Unlike wine, there are no additives of anti-oxidants such as sulphur. Now, this paste is centrifuged, which separates the oil. 20% is EVOO, and 80% is a “waste” of stones and fruit pulp. The waste makes lower grade oil used for canned food or cosmetics such as soap.

The new EVOO moves to stainless steel storage tanks. Temperature control and a blanket of carbon dioxide prevent oxidation. After 40 days, any remaining particulates in the oil will have fallen to the bottom of the tank. Now it’s ready for bottling.

EVOO extraction uses no heat, chemicals or water, and it’s important to keep the process temperature below 25°C. Light, heat and oxygen all degrade the oil, by increasing acidity and losing subtle aromas.

The higher the acidity, the more quickly the oil will degrade, both during the process and in subsequent keeping. EVOO must have a maximum acidity of 0.8%. The best has far less. Oltremonti’s acidity is 0.2%.

That low acidity ensures the oil will have an optimal shelf-life in a sealed bottle of around 12-18 months before it starts to degrade. Once opened, it remains fresh for 2-3 months. Unlike wine, maturity in Olive Oil is never a good thing!

Oltremonti often works with Parisien chefs; such is the premium nature of their product. But the proof of a good EVOO is in the tasting. Indeed, the PDO insists on a tasting panel to guarantee quality and authenticity. The tasting methodology is rigorous. There are official descriptions and a list of faults. In that sense, it resembles wine judging.

However, that’s almost where the similarities end. The colour and texture aren’t part of the assessment. EVOO tasting also has 1-10 scales for intensity, bitterness and pungency. 1.0 to 3.5 is light, over 3.5 to 6.0 is medium, and 6.0 to 10.0 is intense.

If this sounds complicated, Emilie’s explanations made it straightforward. Just like wine, it takes only a short time to pick up the basics but then years of practice are needed to become a skilled judge!

Naturally, I was keen to learn more. The biggest discovery for me was that, like wine, a dominant flavour doesn’t necessarily mean better. Instead, you should choose your EVOO according to culinary use. Emilie told me that a chef will always have three oils to hand; a light one for fish, baking and pesto, a medium oil for salad dressings, pasta and white meats and an intenser oil for red meats and finishing dishes such as soups, stews, risotto and paella.

Here are five Oltremonti EVOOs, in order of intensity. A cobalt blue container masks any colour distractions, hand warmed to release lighter aromas. It was also interesting to see that water has little effect on palate cleansing as oil and water don’t mix. To keep the senses fresh, a slice of green apple between oils does the trick! 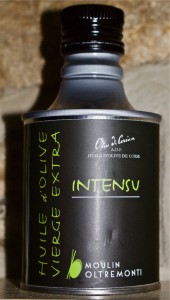 Every one of these oils was excellent, yet each clearly different. Now I’ve lost my EV I’m keen to practice these new skills. If possible, try before you buy!

Oltremonti has the highest EVOO credentials. It’s the only Corsican entry in the prestigious Flos Olei a review of the very best EVOO producers worldwide. Also, they have won several gold medals in EVOO competitions in Paris, Madrid and Japan, with a double-gold medal for Intensu in the Athena competition in Greece.

As well as Corsica, you can find their oil in Canada, France, Luxemburg, Belgium and Austria. Although patisserie Ladurée at Harrods and Covent Garden use their oil, my plea is for someone in Britain to start importing it for us all to buy!

Huge thanks to Emilie Berta-Borel for a fantastic visit and tasting of the Oltremonti oils.