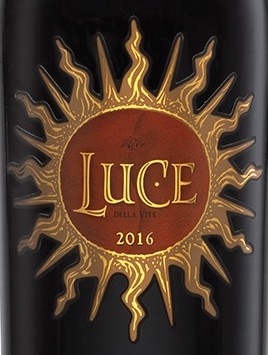 In Italian, Luce means light. Light brings life. Hence the name of this Supertuscan winery owned by the Frescobaldi family, whose top wine is Luce della Vite. In 1993, this project released its first vintage. Back then it was a joint venture between two wine titans, namely Vittorio Frescobaldi and Robert Mondavi.

Tenuta Luce is close to the famous Tuscan hill-town of Montalcino. Today, the Marchese de’ Frescobaldi family own Luce 100%.  Through history, they’ve been explorers, musicians, bankers and politicians. But above all, they have been winegrowers; 30 generations since 1308 – the third oldest in Italy.

However, Frescobaldi lets each of their estates create an independent brand identity. And what brands! As well as Luce della Vite, the group owns other luminous properties including Ornellaia, Masseto, Nipozzano, Castel Giacondo and more besides.

Since they already had a Brunello DOCG estate in Castel Giacondo and this is the place where the Sangiovese grape arguably reaches its apogee, (with prices to match), why create another winery nearby?  The clue perhaps is in the Frescobaldi mission statement; “Cultivating Toscana Diversity”. Each of their estates is different, with something unique, reflecting the variations in Tuscan terroir.  Hence Luce della Vite, despite being in Brunello country, was not created with Brunello in mind.

The estate extends over 249 hectares, of which 88 are under vine. The terroir here has two different zones. The first has lower-lying clay soils ideal for Merlot at 350 metres altitude. Meanwhile, Sangiovese occupies the higher land at 420 metres, with galestro soil, a kind of marl. The light here is intense, with hot, dry summer days yet colder windy nights.

So the idea was to create the first Montalcino Supertuscan; combining the structure of Sangiovese with the round softness of Merlot. The resulting blend in Luce is usually around 50-50, depending on the year. It’s a contrast to Brunello, which must be 100% Sangiovese. This blend also means that Luce can be drunk young or further matured, according to taste.

The striking Luce della Vite label features a shining red sun with twelve flames, said to be inspired by the altarpiece in the Renaissance Basilica di Santo Spirito in Florence. Incidentally, there’s a Frescobaldi connection there – they donated the land upon which the Basilica was built.

Luce was designed to be iconic and achieves that effortlessly. Of course, the proof of the wine is in the drinking.

In 2016, Luce is a blend of 55% Merlot and 45% Sangiovese. 2016 was a vintage year where there were no excesses of either heat or rain, which is becoming unusual in these days of climate change. Yields are low at 30 hl/ha, evidence of rigorous vineyard practices plus the selection of the only the best grapes for this cuvée.

The grapes were macerated for four weeks to extract all the colour and tannins, before a 12-day fermentation in stainless steel. The wine was then matured for 24 months in French oak barriques, 85% of which were new and 15% second-fill. That level of new oak used might sound excessive, but it isn’t overt. Instead, the wood adds depth and subtle flavours. Bottling was in December 2018, twelve months ago.

This is a big wine, make no mistake. And a young one, so it had an hour’s decanting before serving.

15% abv is on the label, but it feels less than that. Regardless, Luce never feels hot or heady. Such is the balance of alcohol with fresh acidity and concentrated fruit. It wears it’s alcohol lightly.

It’s a dark ruby red, with aromas of pencil lead, bergamot, oranges, and brown spices underlying sour cherry. On the palate, the watchwords are elegance and finesse. Despite the richness, it’s agile; there’s nothing weighty or clumsy, just depth of cherry and plum fruit. Meanwhile, the tannins add polish and a luxuriously smooth shine.

Finally, on a persistent length, savoury spices re-appear. It makes you yearn for more. A young wine that will develop further, yet why wait? Yes, it’s a modern “international style”. But, in this case, what style.

Luce della Vita isn’t a wine for every day. It’s an unashamed luxury, but worth it.

Luce della Vite 2016 is available at several UK stockists, including Edencroft Wines for £82.95.

The other wines of Tenuta Luce

Those wanting to explore the style of Luce della Vite at a lower price should try Lucente, the “second wine” of the estate made since 1995, which is also a blend of Sangiovese and Merlot in a lighter style. £28.95 from Edencroft.

A final word on sustainability, vital to combating Climate Change. Frescobaldi uses various techniques across its estates. In the vineyard, they are AgriQualità certified for sustainable farming, while their forests are certified as sustainably managed. In production, they reduced their carbon footprint by using lighter bottles and reducing energy and water usage.

There is solar power generation, and energy also comes from a biomass plant. Being truly sustainable goes beyond the vineyard and winemaking, and includes transport and waste disposal.