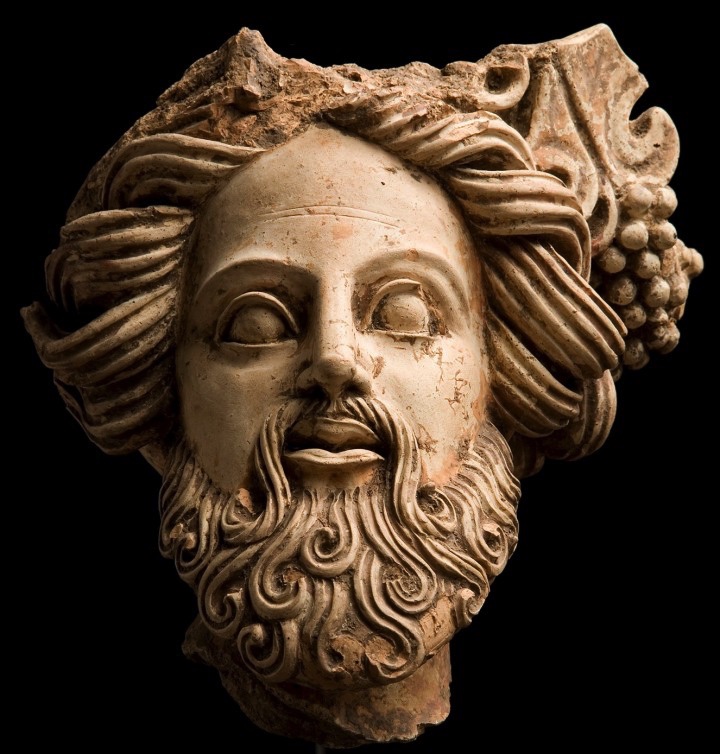 The magic of Caiarossa wines

Caiarossa sits alone amidst unspoilt rolling hills in the Val di Cecina near the Tuscan coast. It’s a few miles north of the now-famous Bolgheri wine region. The blank canvas that was Tuscany’s coastal strip underwent a transformation a few decades ago. A slew of wineries and vineyards now occupy this previously virgin land, renowned for its world-class Bordeaux-blends. Caiarossa wines fit this general description, but it’s in the details where such similarities end and uniqueness begins.

The locals call the Val di Cecina Il Giardino, the garden. Maybe that’s a reference to Eden because until recently olive trees were the only visible cultivation amongst truffle oak and cork oak trees. Occupying higher ground than Bolgheri, there is a different microclimate. The surrounding mountains offer direct protection from stormy weather. An old olive farm called Podere Serra all’ Olio became the base for Caiarossa wines. Their first sixteen ha of vines date from 1998-2000. Expansion in 2008-2013 came from planting another 15 ha nearby at Podere La Lame and Podere Nocolino. 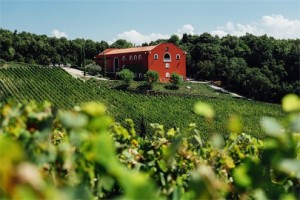 Caiarossa and Pergolaia were the first red wines released, starting in 2002. However, two years later Eric Albada Jelgersma bought the fledgeling operation, which resulted in a step-change in quality. Jelgersma had brought with him the sensibilities of owning two beautiful Margaux Grand Cru Classé estates in Bordeaux; Château Giscours and neighbouring Château du Tertre.

Now there’s six wines in the range, all Toscana IGT’s, plus a little grappa and a tiny amount of olive oil. To differentiate Caiarossa (the estate) from Caiarossa (the flagship red wine), I refer to the wine as Il Caiarossa in this article.

The wine labels depict the head of Dionysus, the Greek God of wine. Jelgersma also owns this Etruscan masterpiece, discovered in the nearby Alabaster town of Volterra. The vines may be new here, but wine culture certainly isn’t.

Geological analysis has uncovered a dozen different soils. There are various mixes of chalk, sandstones and clays. Indeed, the deep red soils found at Podere Serra all’Olio gave Caiarossa its name. There are eleven different grape varieties planted at high density; each matches the most suitable soil type. Even in such a frontier territory, this is unusual. The established vine paradigm has been to plant the two most famous Bordeaux grapes (Cabernet Sauvignon and Merlot) plus Sangiovese.

Consequently, Caiarossa paints with an extensive palette of predominantly French grape varieties. Merlot, Cabernet Franc, Cabernet Sauvignon and Petit Verdot are the Bordeaux reds. Then there are Syrah, Grenache (Alicante), and Mourvèdre reds from the Rhône. Sangiovese is the sole Italian representative. The whites are Chardonnay, Viognier, and, most unusually, Petit Manseng. Unlike at some other properties in this region, there is no Vermentino grown. Perhaps it is too far inland or too high for it to thrive.

Caiarossa was organic from the outset. It became certified in 2003 and progressed to Demeter-certified biodynamic farming in 2005. All harvesting is by hand, over an extended period. Commencing during September, it finally ends in November with the raisined Petit Manseng grapes.

Frenchman Dominique Génot oversees the winegrowing here, and he has just celebrated a successful decade in charge. As an aside, Dominique now runs his own wine estate in southern France, called Mas Llossanes.

The purpose-built winery incorporates the principles of Feng Shui to encourage positive energy. It shows itself in the architecture, its orientation and even the use of colour. Scoff if you wish, but this winery is also highly practical. Built into a hillside, this allows the wine to flow downwards under gravity as the winemaking progresses.

The top-level receives the fresh grapes for hand-sorting and destemming. They fall to the level below where the fermentation takes place. It’s is in oak casks and cement tanks, using only wild yeasts and each grape variety vinifies separately. Maturation is in the bottom level barrel room, where there are a variety of barrels and barriques, chosen to match the character of each wine. Blending takes place in cement tanks. 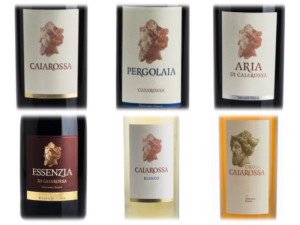 Their dry white wine, Bianco is 70% Viognier and 30% Chardonnay from the chalkier areas. These are barrel fermented in a variety of old casks. Chardonnay also gets battonage (lees stirring) for extra complexity. 2014 was a tough year, as it was in much of Italy, but the high acidity makes this wine dry, fresh and elegant. Also, there is stone fruit on the nose and palate and no oaky flavours. Grilled Sardine Heaven. 3,500 bottles made. Unavailable in the UK, but around £18 in Italy.

Pergolaia is from the Podere Serra all’ Olio. Now it also includes fruit from Podere Nicolino. This wine is usually 90% Sangiovese, and in 2012 it has splashes of 3% Cabernet Sauvignon, 4% Petit Verdot and 3% Merlot. It’s their most “traditional” wine, aged for 12-16 months in old oak casks then kept in cement tanks until 24 months old.

Always viewed as the second wine of the estate, there is nothing second class about it. It remains a perfect introduction to Caiarossa’s winemaking and a super expression of Sangiovese. Herbs and tea on the nose, then gorgeous sour cherry fruit with impeccable balance. It combines the generosity of a Morellino di Scansano from the Maremma further south with the complexity of a Chianti Classico from inland. Perfect drinking now or a keeper, you choose. Every home should have some. Indicative price in the UK around £18.

Essenzia was born in 2009. Notably, the grapes used have been different in every release. In 2009, it was 70% Syrah and 30% Alicante, while this 2011 is Cabernet Sauvignon and Alicante.  The latest 2012 is all Cabernet Franc. I’d wager that future releases might be something else entirely. It all makes it somewhat confusing regarding identity and continuity, but the goal is to select the best wines of the year regardless of the variety.

This 2012 is a high-intensity rich wine, whether in colour, scent or sheer power. Still young, it is already a lovely wine that’s drinking well after a two-hour decanting period. I assume that Cabernet is the dominant partner, giving dark cassis fruit all wrapped up in smooth, polished tannins. The thick texture isn’t clumsy; it has balance and grace. Hints of menthol and spices emerge in the glass. Density and length show the potential for ageing.

At this stage, it’s all about the fruit, but with time I’d expect a mellow complexity to emerge. Best to save this for another ten years or more, as you would do with a fine Napa Cab, which it most closely resembles. I hope I get the chance to try it again then! Essenzia only comes in just a few hundred magnums.  Unavailable in the UK, indicative price in Italy around £90 in Magnum (1.5l).

This second release of Aria, first made in 2011, is from the younger Podere Nocolino and Podere le Lame vineyards. In 2012 it was 32% Cabernet Franc, 8% Petit Verdot, 25% Syrah and 16% Cabernet Sauvignon. Aged in 15% new barriques over 14 months and then a further six months in cement tank. I see this wine as Il Caiarossa’s little brother, as it is stylistically similar, though less dense or complex.

Dark purple in the glass, it’s still quite austere at present and needs decanting. However, its fresh acidity and lovely brambly scent suggest this will open up with some bottle age. Indeed, it reminded me of the 2005 Il Caiarossa. I’d expect this to age well, and it needs another couple of years to reveal all of its charms. Potential as yet not fully realised but no doubting the pedigree. Unavailable in the UK, price in Italy around £18.

Oro is a late harvest white dessert wine. It’s 100% Petit Manseng grown on the chalkiest soils at Podere Serra all’Olio, made since 2006. The grapes are raisined on the vine to increase their sugars and complexity. Hence this is neither an Italianate passito (dried grapes) or a Vin Santo in style. Rather it’s like a Jurançon or Pacherenc from France.

It gets a long and slow fermentation before 14-months maturation in 66% new oak. A bright golden gleam and a powerful nose of dried fruits with toasty aromas. On the palate, candied citrus fruit, apricot, mirabelle plum and caramel make a lovely mouthful before a long spiced finish. There’s a terrific tension between acidity and sweetness. I’d love to see how this ages, I imagine very well. Delicious with blue cheese, this wine may be unique in Italy. Unavailable in the UK, price around £25 for a 50cl bottle in Italy.

Blended from seven (or even eight) different grape varieties from Podere Serra all’ Olio, the ratios used to vary wildly every year.

This 2012 has Merlot (28%), Petit Verdot (6%), Cabernet Franc (26%), Cabernet Sauvignon (16%), Sangiovese (10%), Grenache (1%), and Syrah (13%). No Mourvèdre this year. Previously, Petit Verdot, Sangiovese, Mourvèdre and Syrah have played larger parts. You need a spreadsheet to keep up with all the combinations! Such a complex blend is unorthodox; perhaps it is the Daumas-Gassac of Tuscany.

On the nose, Sangiovese brings loose-tea perfume, and Cabernet Franc brings an aroma of pencil shavings. There is also a hint of fennel.  Black cherry and damson fruit are in the foreground, but subtleties lurk in the mix and slowly appear. The fresh acidity keeps you coming back for more. Then there are liquorice, fig, tar and balsamic hints that will become more evident with age. Grace and elegance that makes my heart beat just a little faster.

Summing up, it’s a Bordeaux blend with Italian brio. In my favourite years, say 2006 and 2009, I’d rank this wine as one of the great Italian Bordeaux blends.  Indicative price UK around £45-£50, depending on the vintage.

Caiarossa has come a long way in a relatively short time. With this in mind, I look forward to discovering many more magical vintages. I believe their best is yet to come.

UK availability: Inverarity Morton, Berry Brothers and Rudd, Farr Vintners and Millésima. Not all wines are available in the UK given their small production. Reason enough to go to Italy, as if one were needed.

A year on, the reds from the 2013 vintage have been released. My notes on Pergolaia, Arai and Il Caiarossa are in this downloadable pdf.

More on red wines from the Tuscan coast in my Tenuta di Ghizzano article here.