Arneis is a fashionable Italian white grape variety. It has an exciting story to tell and can make excellent wines. Two of those wines feature here, both from the Malvirà winery, showing contrasting styles. Malvirà is at Canale, the unofficial “wine capital” of the Roero DOCG, in Piemonte, northern Italy.

Arneis is a native variety of Piemonte. Documents suggest that Arneis may have been vinum Ranexii of the Renesio vineyard at Canale in 1478. However, the name Arneis could come instead from the local dialect word for an irritable person, arnese. Both seem entirely plausible.

Irascible is undoubtedly a good description of Arneis. Growing this grape is challenging, as it was once particularly disease-prone. Also, it has low natural yields. Another characteristic is that it drops its acidity quickly during the final ripening, meaning that ensuring optimal ripeness and preserving sufficient acidity needs vigilance. Finally, the grapes and juice are also prone to oxidation. There are certainly more comfortable alternatives!

The other name for Arneis is Nebbiolo Bianco, not that Arneis is even remotely related to the red Nebbiolo. It got this historical synonym from co-planting it among rows of Nebbiolo. It was so that Starlings and insect pests would go for Arneis rather than the more valuable Nebbiolo! Additionally, Arneis was once allowed to soften Barolo and Barbaresco. That’s similar to the Viognier/Syrah pairing in France’s Côte Rotie.

Indeed, there’s another parallel with Viognier. By the mid-sixties, Arneis was so unlovable it was nearly extinct. There was less than 10 ha left in scattered plots.

Like Viognier, rescue came from a few dedicated producers, and Malvirà was an early adopter. Fortunately, rescue coincided with widespread improvements in Italian viticulture and vinification. In addition, research brought better techniques, including new disease-resistant clones.

Piemonte might be most famous for its big reds, but Arneis (and Cortese*) has shown that Piemonte has excellent dry white wines. By the mid-eighties, Arneis became fashionable in Italy and beyond, and commercial viability became assured.

These days, this variety is still cutting-edge but no longer on the edge. However, it’s in the Roero DOCG where it’s most characterful and widespread. There are 1,180 hectares of Roero DOCG vineyards, of which 907 ha are Arneis. Meanwhile, 60% goes for export worldwide**. That’s some turnaround! 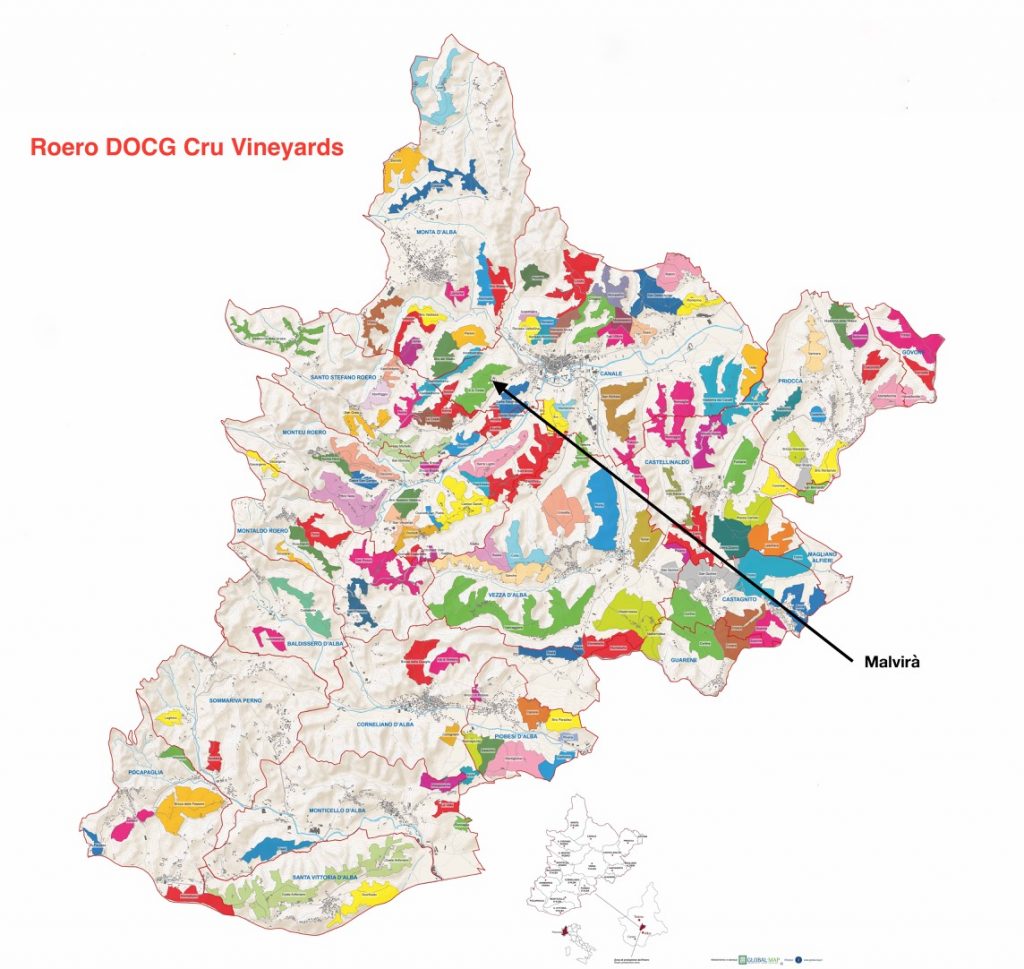 Roero’s southern boundary is on the left (north) bank of the Tanaro river. Hence Roero faces Barolo DOCG, which is across the river on the right (south) bank. The best Roero terroirs for Arneis are often on the colder north-facing slopes of this hilly terrain, leaving the hotter south-facing slopes to Nebbiolo. Many vineyards are extraordinarily steep, and most are small, precluding mechanisation.

Roero became a DOC in 1989 and upgraded to DOCG in 2004. Now it’s also a UNESCO world heritage site, a delight to explore.

The DOCG for Bianco stipulates that it must be 95% Arneis, although most are 100%. It also requires a minimum of four months of ageing. Also, there is a Riserva level with a longer minimum of 16 months of ageing. Some wines will age in oak; others rely on inert stainless steel or cement tanks. Spumante sparklers are allowable too, and while uncommon, are Método Classico.

Finally, there are no less than 153 Cru vineyard sites (known as MeGAs) identified. Their names can show on the label. Some of the better-known ones are Trinità, Saglietto, Renesio and Mombeltrano.

The Damonte family established Malvirà in 1972.  Malvirà was an early adopter of Arneis and is one of its greatest protagonists. Farming is organic, with a total of 42 hectares of vineyards. 30 ha of this area is Roero DOCG, and of that 18 ha are Arneis and 12 ha Nebbiolo. Different Cru vineyard sites allow them to make several different expressions of Arneis in their carbon-neutral winery.  In total, Malvirà makes some 340,000 bottles each year.

Two Malvirà Arneis wines feature here, in contrasting guises, with both now at peak drinking. Closures are with excellent DIAM corks. In the UK,  Independent Wine is the stockist for both of them.

Sans Sulphur demonstrates just how far Arneis winemaking has come. If the goal is to prevent oxidation and ensure wine stability, the easy route would be to use sulphur as a preservative. Not here. The grapes are from the Cru Trinità vineyard nearby, fermented and matured in stainless steel for eight months.

Instead of using sulphur as a preservative, retaining the CO2 gas from fermentation in the wine acts as protection.  It means that on opening, the wine has tiny bubbles trapped in the wine. As a result, it’s not frizzante or spumante in a sparkling sense, rather an attractive pétillance, which acts as a refreshing zingy prickle on the tongue. Furthermore, it preserves the varietal character, unlike some sans sulphur wines that end up as “orange wines”.

Silver-lemon coloured, there are aromas of pears and camomile. Palate-wise, this is a characterful example, with pear and grapefruit flavours. There’s a little savouriness, too, perhaps retained from fermentation, which adds subtle complexity. The perception of acidity is higher because of the bubbles, so it stays refreshing.  This wine was even more open and attractive the next evening if you can resist that long. There are c18,000 bottles pa.

This wine makes a good aperitivo but shone with dressed crab and a little mayonnaise. One thing, though, it doesn’t say Sans Sulphur enough on the label; only the lack of the usual “contains sulphites” warning on the back gives the game away.  £17.31

Those wanting a “classic” Roero Arneis should start here. Yes, there are sulphites, but being organic, these are at the minimum level for preservation. The Arneis grapes are from the Cru Saglietto vineyard near Canale.

While fermented in stainless steel, maturation takes a different route. 50% matures in stainless steel, while 50% ages in older 500-litre barrels. Blending is after 12 months. This combination brings an additional and welcome creamy texture with a hint of hazelnut.

Consequently, Saglietto is broader and fruitier in the mouth. It’s lightly golden, with a pretty nose of pear and elderflower. The main hallmark is a full-bodied palate akin to biting into a ripe Conference Pear. There’s excellent length, too, with a slow fade. Again, it’s not out of place as an aperitivo, but best with fish. It certainly suited a pan-fried Swordfish steak slathered in Pesto. c8,000 bottles per year. £19.90

Arneis is an excellent example of why it’s important to preserve local and sometimes unlovable grape varieties. The two examples here both show great character and authenticity, but in contrasting ways. They are a world away from bland internationalism. But, to paraphrase Hans Christian Andersen, this Ugly Duckling did turn into a Swan.

Try them this summer and see for yourself.

*Could Erbaluce and Timorasso be next?

**My thanks to Consorzio Tutela del Roero for confirming the latest statistics and historical details, and providing the map.