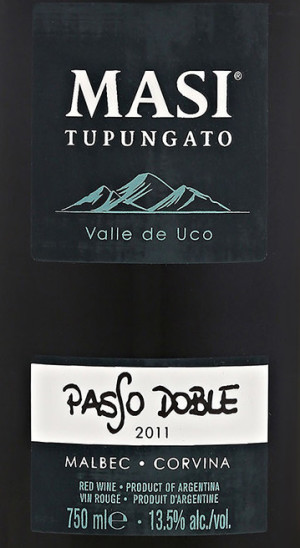 Masi is a heavyweight Italian producer making a superb range of wines. These include classics such as Soave, Valpolicella, and Amarone. The company expanded into Argentina and created Passo Doble in 1999. It comes from the Mendoza region at their high-altitude Vigneti La Arboleda vineyard; 140 hectares overlooked by the mighty Andes and now in certified organic conversion.

Consequently, I define this wine that as exciting, extraordinary and unique.

Passo Doble is an Italian package; the name is a clever pun. It refers to the famous Argentinean dance depicting a matador facing a bull. But it also implies the apassimento wine-making method, of which Masi are masters. It’s a second fermentation using semi-dried grapes to boost flavour, texture and alcohol.

It is also an audacious marriage of two black grapes, Malbec and Corvina. While Masi’s Malbec vines are 40 years old, Corvina is from cuttings taken from Masi’s vineyards in Valpolicella. Hence, the style is an unusual twist on a Valpolicella Ripasso.

The Malbec ferments first (with 5% Merlot added). When this is complete, 30% lightly dried Corvina grapes are added. It induces a second fermentation for fifteen days. The wine then matures in French oak for 9-10 months before release.

Passo Doble is an intense ruby-purple. The aromatic nose fuses black cherry from the Corvina with plum from the Malbec. On the palate, the texture is velvety. Layers of black cherry, blueberry and plum fruits interlace with violets and liquorice. Fresh acidity brings you back for more. Smooth tannins and just the right amount of alcohol mean fine balance. A final hint of coffee lingers on a persistent dry finish.

Drinking now, it can develop over the next five years. As Masi says, “Argentinean Soul, Venetian Style.”

Widely available, from £10.99, for example at Aitken Wines and Oakham Wines

P.S if you like this, Masi Tupungato also makes a bigger and beefier Amarone-styled wine.  It’s Corvina with Malbec grapes added, called Corbec. Well worth trying too.