Millésime BIO was established in 1993 by a handful of organic winegrowers from Languedoc-Roussillon. In this 27th edition, it’s now the biggest trade fair for organic and biodynamic wines in the world. The 2020 show ran from 27-29 January 2020 in Montpellier, south of France.

You might think that this show would only feature French wines. After all, France is a leader in organic wine production and consumption. However, 21 countries were at Millésime BIO. There was a strong presence from nearby European countries such as Italy, Spain, Portugal, Germany and Austria. From further afield, there were wines from Greece, South Africa, Argentina, Chile, New Zealand and the UK.

Crucially, only producers that have official organic or biodynamic certification are allowed to exhibit. There are no grey areas regarding credentials. Those winegrowers without certification or still in conversion cannot participate.

And if should you tire of wine, there was organic beer, cider and spirits. Alternatively, there were conferences and masterclasses too. 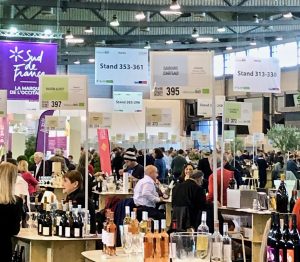 The scale of the show is immense: five huge halls with 1,300 producers and their wines. That means thousands of wines made in every conceivable style.  You can’t possibly get around it all in three days, and it would be futile to try.

And while the show had record attendance, there’s enough space and long opening times so that you can progress comfortably. Every stand is the same, so that small winegrowers are on a par with even the biggest.

As for refreshments, there are bars, a restaurant and outdoor food trucks, and everything is, of course, organic. As you would expect, recycling is of a high standard.

All this, of course, makes this trade fair the perfect place to do business. 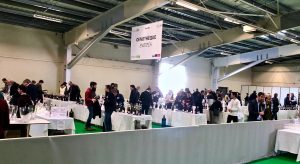 Like all big wine fairs, it’s best to do a little planning beforehand. I liked the fact that producers were not grouped by country or region. This facilitates contact and curiosity but can impede navigation. Fortunately, there is a large self-pour area called Oenotèque, where the wines are grouped by country and region. That’s ideal for me as I like to taste by category before deciding who to approach. My preference is to choose some favourite producers and discover some new ones

How ever you decide to approach it, planning is easy. There’s an excellent paper catalogue provided but there’s also a free App, with all the producers and events, geolocation and appointment scheduling. The halls and stands are also well signposted.

The future is bright for organics 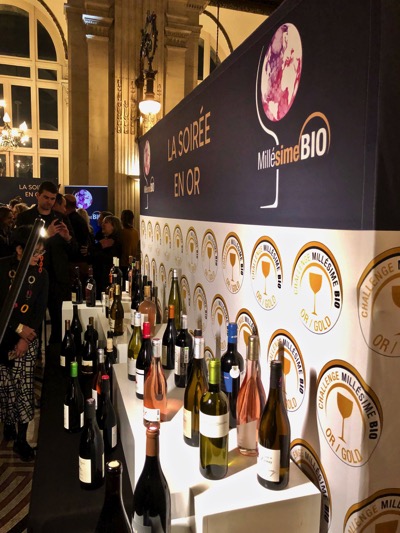 To meet demand, Italy, France, and Spain (the three main producing countries) are speeding up their vineyard conversions.  Production will reach two billion bottles of organic wine by 2023. By then, France will have the second-largest organic vineyard area, behind Spain but overtaking Italy.

In consumption terms, France will be the largest market by 2021, outpacing Germany. Meanwhile, it’s heartening to see that the UK is still the fourth largest consumer country.

Meanwhile, Italy and Spain are the biggest organic wine exporters.

And vitally, on the evidence shown at Millésime BIO, organic wine quality is not only generally high, but it’s also still improving. Prices are sharper too, with little difference to conventional rivals.

Strangely, given my long interest in sustainability, this was my first time at Millesime BIO. It certainly won’t be the last. This is the place to discover world-class organic wines at every price point. Consequently, this treasure-trove leaves me asking that most basic yet perennial question,

“when organic and biodynamic wines are this good, why drink anything else”?

Here are just ten wines, a personal selection reflecting the diversity of the show at a range of prices.

Domaine Jean Louis and Jean Christophe Bersan, Chardonnay Côtes D’Auxerre AOP, Burgundy. A stunning and subtle Chardonnay that rightly picked up a gold medal. If you like the Chablis style of Chardonnay, then you’ll love this. It’s crisp, subtle, mineral and balanced. Their entire range of reds and whites are impeccable. Vintage Roots, £16.50.

La Chouette du Chai, Pic Saint-Loup AOP. Rien Ne M’Effraie  2017. Pic Saint-Loup is close to Montpellier, and this biodynamic estate’s name means “The Owl of the Wine House”. Winegrower Sylvie Guiraudon has blended 55% Syrah, 25% Grenache, and 20% Mourvèdre into a harmonious and seamless whole. This cuvée means “nothing frightens me”. On this evidence, nothing should. A winery to watch closely! N/A in the UK but I hope that changes. €13 in France.

Maison Plantevin, Côtes du Rhône AOP. Laurent Plantevin has 40 hectares of vines around the Dentelles de Montmirail in the Rhône and was organically certified in 2014. While Côtes du Rhône is a famous red appellation, quality and style vary enormously. This 2018 is an excellent blend of 60% Grenache, 20% Syrah, 10% Carignan and 10% Cinsault. It sees no oak so majors on fruit quality and harmony. Terrific easy drinking.  Vintage Roots, £10.50

Valentina Cubi, Valpolicella Classico Superiore DOC. It’s hard to pick only one wine from the fantastic Cubi range, from the no-sulphur Sín Cero Valpolicella to the stunning Morar Amarone.  However, Íl Tabarro 2016 shows what Valpolicella can really achieve. From the Classico heartland near Fumane. A traditional blend of 65% Corvina, 25% Rondinella and 10% Molinara, aged in big Slavonian oak barrels for 18 months.  Tannico £18.00

Avignonesi, Tuscany. Rosso di Montepulciano DOC. Since acquiring Avignonesi in 2009, owner Virginie Saverys has turned it into the largest Biodynamic estate in Italy. From their wide range, my pick was their Rosso di Montepulciano DOC 2017. It’s 94% Sangiovese with 4% Syrah and 2% Colorino. Essentially, it’s the lighter version of its bigger and more expensive brother, the Vino Nobile. The Rosso gets six months in Slavonian oak plus three in the bottle. Balanced and elegant, drink this Rosso while you’re waiting for the Vino Nobile to mature! Hennings Wine, £17.50

Aranleón, Utiel-Requena DO. As a long-term fan of Aranleón and their organic red, Sólo, I was knocked out by Món 2017. This wine is from their new acquisition called Montesanco. Món is a hilltop vineyard at 730 metres where pre-phylloxera Bobal bush vines have somehow survived on their own roots for over 100 years. Fermentation and 12-months maturation in new French oak barrels.  Their 2017 is only their second vintage, yet it must be one of the greatest examples of Bobal. With less than 5,000 bottles made each year, it’s not in the UK. In Spain, it’s €25. So until I can get back to València I’ll console myself with Sólo 2017, from the Wine Society £9.50

Finca el Molar, Manchuela DO. Quantum Vino de Hielo 2009 is a Cabernet Sauvignon Icewine. While Manchuela has baking summers, it has snowy winters, especially at altitude. Nevertheless, Spanish icewines are a rarity. The harvest was from three rows of Cabernet in the December 2009 snow.  It’s 15% alcohol, with 150 g/l of residual sugar, ageing five years in French oak. This amber-coloured nectar has lovely toffee, coffee and nut flavours. Orange hints suggest a little Botrytis too.  N/A in the UK. In Spain, it’s €29 for a 50cl bottle.

Clos Henri Sauvignon Blanc, Marlborough. Clos Henri was the sole Kiwi representative at the show. I assume attendance is easier given the links with Henri Bourgeois in Sancerre. That French influence always shows in their wines. They have subtlety and mineral elegance rather than tropical fruit and naked power. Their Sauvignon Blanc 2017 is a classic. 10% of the juice ferments in oak to add more texture. One of Marlborough’s great Sauvie’s, no question. New Zealand House of Wine, £25.99

Nikolaihof Wachau. Nikolaihof is the oldest winery in Austria and one of the first in the world to be Biodynamic, back in 1971. Their single-vineyard expressions of Grüner Veltliner and Riesling are some of the greatest made. My pick is the Grüner Veltliner Hefeabzug 2017. While this is their  “entry-level” all the GV typicity is here; elegance, depth, nuance and white pepper.  AG Wines £22.99

Am I looking forward to next year’s Millésime BIO 2021? You bet! perhaps I’ll see you there!

To find out more about organics and biodynamics, I wrote a three-part primer on the subject here.