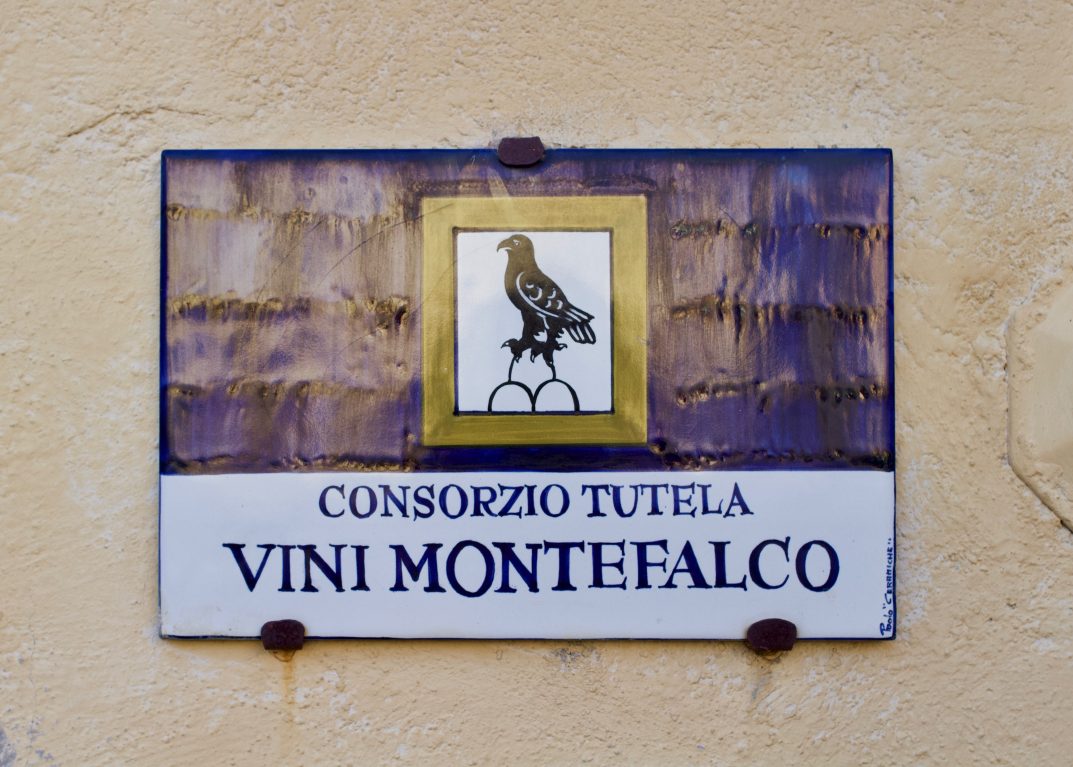 Sagrantino is a fascinating Italian native red grape variety. It’s capable of making outstanding red wines in its homeland around Montefalco in Umbria. This grape has a long history. Despite this, it has only recently acquired success, due to the extraordinary rise of the dry Montefalco Sagrantino DOCG.

It was just in 1979 that this 100% dry Sagrantino first appeared. Now it has the world’s attention as an Italian icon. Indeed, this tiny area, within hailing distance of Perugia and Assisi, has also helped regenerate interest in other Umbrian wines.

This Part 1 tells Sagrantino’s story. Part 2 contains a selection of wineries and wines.

Sagrantino is an ancient variety, perhaps of Middle Eastern origin. Umbria’s wine history is as old as anywhere in Italy. Hence Sagrantino may be the Roman Itriola, a wine written about by Pliny the Elder.

But Sagrantino’s origins remain lost in time. Even DNA testing has so far drawn a blank. Curiously, Sagrantino has no relationship with any other Italian red grape variety. Until recently it’s was only found in small quantities in Umbria, primarily around Montefalco. 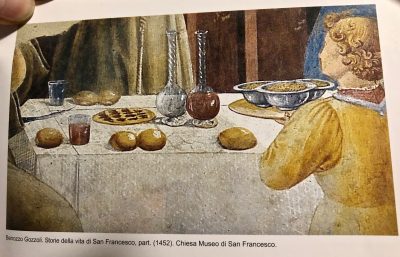 An Umbrian Fresco of 1452 depicting red wine served with dessert. Is this Sagrantino?

The first documented mention of Sagrantino appeared in 1549. Cultivated by Franciscan Monks, it has strong religious links. There is speculation that its name derives from use in Communion. More likely is that it comes from family consumption on feast days and holidays. Always seen as exceptional, cutting down Sagrantino vines was a capital offence in 1622!

This thick-skinned and small-berried grape variety is Italy’s most tannic grape. That means it’s a candidate for being the most tannic grape in the world. In this, it stands with the likes of Nebbiolo, Cabernet Sauvignon, Tannat and Mourvèdre.

Neither is this a grape variety lacking in sugar, fruit or acidity either. It means that Sagrantino wines are always massive, concentrated and powerful. They have deep colour, and are aromatic and vividly flavoursome, with potential for great longevity. However,  Sagrantino’s abundant tannins meant hard and astringent wines in former times. Think tea-bags, bitterness and a mouth-puckering feeling.

No wonder then that for most of its history Sagrantino was a sweet wine. The residual sugar left in the wine helped balance those tannins and reduce the harshness. This style is now Montefalco Sagrantino Passito DOCG, with superb examples available. However, fashion means that dessert wines are a minority sport these days. Indeed, this style now represents only 7% of all Sagrantino production from Montefalco.

From the early twentieth century, dry Sagrantino became a successful blending partner. It’s because extra tannin and colour can be beneficial where these would be otherwise lacking. Indeed, that’s the story of the dry Montefalco Rosso DOC. That has 10-25% Sagrantino blended with 60-80% Sangiovese plus optional red varieties such as Merlot or Canaiolo. There are some cracking examples, especially at Riserva level. There’s many a Chianti producer that might do well to adopt such a blend.

To recap, the production of Sagrantino was mostly sweet, and consumption rarely went beyond the family. That only changed in the late 1970s.

The first mention of Sagrantino as a dry wine was in 1925, produced by a winery that is the present day Scacciadiavoli. However, the first producer to bottle a dry 100% Sagrantino successfully was Adanti. From 1988, Marco Caprai found international success, fame and prestige. Indeed his foundational research into Sagrantino with the University of Milan has become legendary. These events initiated the revolution towards dry Sagrantino, with what is now known as Montefalco Sagrantino.

Montefalco Sagrantino became a separate DOC in 1979, promoted to DOCG in 1992; covering the sweet Passito and dry Secco styles. Even then there were still only 66 hectares of vines. This area grew rapidly from 2000, as the fame and fortune of the dry wine spread. Now there are 760 hectares, and the number of producers has also expanded from 16 to 60. As momentum and commercial viability built, new wineries were created, such as Perticaia and Benedetti & Grigi. It also attracted Italian wine producers from other regions, who have established new ventures in Montefalco. Those include Cecci from Tuscany (Alzatura), Lunelli from Trento, (Tenuta Castelbuono), and Lungarotti from nearby Torgiano.

Now there are some 1.3 million bottles each per year. That’s still not a lot of Montefalco Sagrantino Secco wine, though 70% is for export, including to the UK.  One of the iconic red wines of Italy, it’s still wine for special occasions.

As Sagrantino’s fame has spread, so have plantings elsewhere. As usual, Australia has been at the forefront, with vineyards now also in Sicily, California and Argentina. 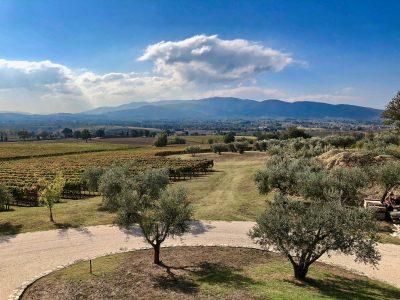 Sagrantino flowers early and is a late ripener. It thrives on clay/limestone soils and in the summer heat under the clear skies of a Mediterranean climate. The delimited DOCG vineyards are between 220-472 metres altitude. From the breathtaking balconies of hilltop Montefalco, you can view almost the entire DOCG in the round. The vines are below, planted on the slopes of rolling hills. There are four distinct subzones, based on nuances between different soils, aspects and microclimates.

Meanwhile, any lower lying flat land is unsuitable as it is too humid, given that Sagrantino is susceptible to Downy Mildew.

Grapes are far from being the main crop in this area, dominated instead by a sea of olive groves. Indeed, olive oil is still the staple product of this region. Meanwhile, the volume of truffles from the local forests remains unrivalled in Italy. 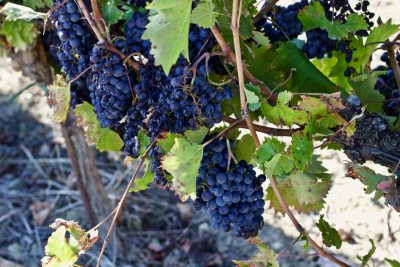 The rise of dry Montefalco Sagrantino is reliant on modern science, with research into its viticulture and vinification. The central problem is tannin management.  Grape tannins are complex molecules from the skins, pips and stems. Tannins bring structure and longevity, so attempts to moderate them and polish them into velvety elegance is the key.

There is no easy fix for Sagrantino’s abundant tannins. Instead, a host of interventions in the vineyard and the winery play a part. Sagrantino winegrowers certainly earn their spurs!

In the vineyard, new planting of appropriate vine clones and rootstocks has been possible. Viticultural attention to vine training, leaf management, optimal harvest time and careful grape selection are all beneficial.

In the winery, so much still depends on skills and experience, in other words, the winemaker’s art. However, destemming the grapes and gentle grape pressing are a given. Some only use the free-run juice and avoid using the press wine. Using different yeasts in fermentation can also help. Some employ microoxygenation, which breaks down tannins more rapidly. Careful fining may also help in some cases.

Inevitably, the most significant factor in transforming tannins remains patience. For the Montefalco Sagrantino Secco DOCG, the minimum maturation time is 37 months from December 1st each year. Also, twelve months of this period must be in wood and four months in bottle.

Using wood allows the slow ingress of oxygen through the barrel into the wine, softening the tannins. Some use sizeable inert oak casks, others small barriques which have a larger surface area to volume. Some have a mix. Old wood is the norm, to avoid introducing even more tannin. In practice, maturation time is often considerably longer than the minimum. Whether this is mostly in cask or the bottle depends on the winemaker.

All this means that the Sagrantino grape profile has evolved considerably. What was once always tannic and rustic is now one of velvety elegance.

There is, of course, some vintage variation each year. However, the quality of most Montefalco Sagrantino Secco since 2003 is remarkably consistent, ranging from excellent to outstanding.

Some producers have released their 2014s. If you buy these, prepare to wait a few years to enjoy them at their best. Other producers prefer to age their wines longer, so older vintages are often their current release. They are usually ready for drinking though will improve and evolve.

Lovers of the world’s most fabulous red wines will be familiar with this need for patience. As a bottle of Montefalco Sagrantino Secco could easily have a lifespan of 15-20 years, take your time!

Part 2 contains a selection of Montefalco wineries and their dry Montefalco Sagrantino DOCG wines, most with UK availability. There are prices, stockists, and food matching suggestions too.

PS There are also some excellent white wines in Montefalco too, particularly those made with the Spoletino grape. Is this Montefalco’s next big thing? That’s the subject of this article.