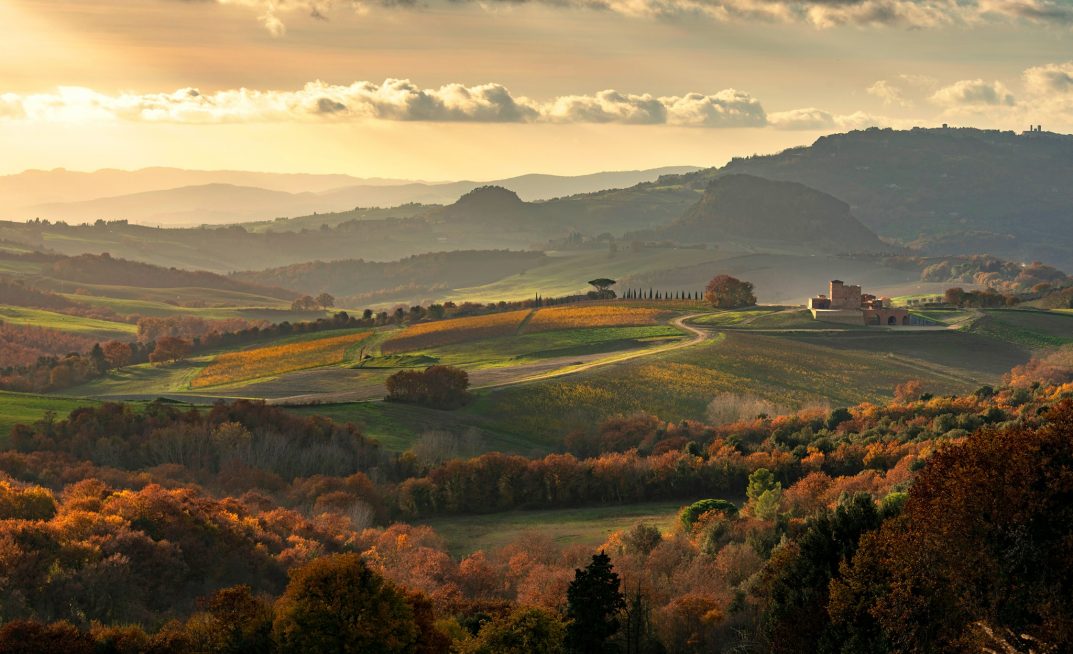 MonteRosola is a contemporary winery in the hills close to the hilltop town of Volterra in Tuscany. Volterra may be less familiar to some, so let’s start there to understand how MonteRosola and its wines fit into this delightful Tuscan landscape.

Volterra claims the title, “the oldest town in Tuscany.” Indeed, various peoples had continuously occupied it since the Bronze Age. Consequently, there are plenty of remains and artefacts from throughout its history. Accordingly, highlights include ancient Etruscan and medieval walls, a Roman theatre and, occupying the highest point, an imposing fortress built by the Medici family. The Florentines conquered and ruled it, whose bitter rivals were neighbouring Pisa and Siena. One reason is that Volterra has a valuable natural resource in alabaster, which carves into everything from Etruscan funeral urns to medieval sculpture and modern objets d’art.

All this makes Volterra a great place to explore and an ideal base to sample all that Tuscany can offer, whether the countryside or the cities, wine, food, history, and the arts. I’ve been fortunate to spend several vacations nearby. They include happy hours in a Volterran wine shop called Enoteca Scali. That’s an excellent place to start any adventure.

Of course, it’s almost impossible to journey far in Tuscany without encountering vineyards. There have been vineyards in and around Volterra for around 3,000 years. However, this place lies between two of the most prestigious wine regions of Tuscany, which are almost equidistant and can be reached in under an hour. Eastwards lies historic Chianti Classico, while the more modern Bolgheri is on the west coast. The reputations of those regions cast a long shadow, often justifiably so.

The name MonteRosola means a hill of poppies. It’s found on an open plateau, in an area of outstanding beauty, at 430 meters altitude, above two valleys filled with ancient woodland. That altitude and the wind keep things a little fresher in summer and encourage slower and more prolonged grape ripening. The soil is mainly clay near Volterra, though it also has a high mineral content deriving from alabaster. This soil forms a hard crust in the summer heat, reducing evaporation.

The original property, La Rosola, featured a stone farmhouse dating to 1480. It produced grapes, olives, and wheat. In 1999, it was bought and renovated, and winemaking began.

However, the Thomaeus family from Sweden purchased it in 2013 and added 120 hectares. Since then, they’ve made significant changes to put the MonteRosola winery and Volterra on the Italian wine map. There’s been a considerable investment in time, money, and emotion.

The 25 hectares of organic vineyards are hand farmed. There’s Guyot vine training and a summer green harvest to reduce yields too. Only the best grapes are selected at harvest, firstly in the vineyard and then again at the winery.

As far as grape varieties go, in white, there’s the Vermentino that typifies the Tuscan coast, alongside the more unusual plantings of Viognier, Manzoni Bianco and Grechetto. As you would expect in red, there’s Sangiovese, plus the usual French contingent; Syrah, Cabernet Sauvignon, Cabernet Franc, and Merlot. 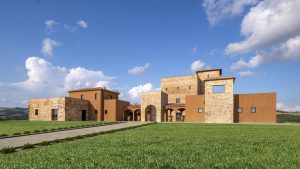 There’s a brand new gravity-fed winery. It’s state-of-the-art and primarily underground. The visible architecture suggests Volterra, a design theme that runs through the business. The winery is sustainable, with particular attention to temperature regulation through design and solar and geothermal energy with heat pumps for heating and cooling. The aim is to use 70% less energy than other wineries in the region.

Also, there is a rainwater harvesting system because, after all, this is a warm climate where rainfall is limited, and all wineries need copious amounts of water.

Winemaking is by oenologist Alberto Antonini, who has Tuscan experience at Antinori, Frescobaldi, and Dievole.  Hence, expect artisanal wines with minimal interventions that offer a sense of place. 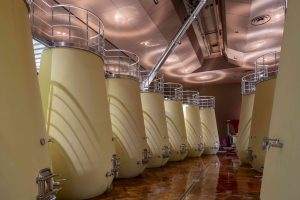 Vinification is in tulip-shaped concrete tanks, each with a capacity of 9,600 litres, and fermentation uses natural yeasts. Maturation is either in concrete tanks or in French oak casks. Production is 70,000 bottles per annum, though the intention is to use the new winery capacity to double this over time.

Meantime, as the winery is also an architectural and artistic landmark, there is a visitors centre with event spaces suitable for wine tastings and tours. It can also accommodate weddings with up to 200 guests.

MonteRosola makes seven different wines. All come with labels that are neat, precise, and modern. Four of those (the two whites and two reds) feature below.

Because of Covid-19, wine distribution was only in Italy. However, this article was revised and updated in January 2022 to show UK retail prices, as Orlando’s Fine Foods now stock them.

The Cassero name is from the oldest part of the Medici Fortress in Volterra. It matures on the lees in concrete tanks for 4-6 months. It’s an excellent example of just how sophisticated and characterful dry Vermentino can be. The texture is slippery and silken. There are aromas of white flowers and then ripe pears and granny smiths on the palate—a super-stylish wine.

Primo Passo means “the first step,” as this was the first white wine produced by the estate. It’s a blend of Grechetto, Manzoni Bianco, and Viognier, with maturation on the lees in concrete for 4-6 months. This ingenious blend is an unusual one. Grechetto is mainly grown in Umbria, while Manzoni Bianco (once called Incrocio Manzoni 6.0.13) is a modern crossing of Riesling and Chardonnay more common in the Veneto and Trentino. Viognier is well-known in Bolgheri.

It’s pale, but the colour will deepen with a little more ageing. Aromas are tropical, perhaps pineapply. On the palate, it’s bone dry with a melange of apricot, peach, and lemon flavours. A zesty minerality keeps it all in balance. Drinking well but will improve over the next year or two. It would be interesting to see how this ages in the longer term. Well-crafted and highly versatile with food.

Mastio is 100% Sangiovese, which sees no oak, with maturation for seven months in concrete tanks. Its name is after the younger part of the Medici Fortress in Volterra. Designed to be drunk young, this is a big powerful wine. Young vines? Vibrant ruby red, intense colour for Sangiovese in purezza. Red cherries on the nose and sour cherry on the palate. The tannins are soft, with some welcome attack from the acidity, making it a better bet with food. The warmth of alcohol on the finish lets it down slightly, but it’s dangerously easy to drink.

With food, Mastio is an ideal wine to pair with a gourmet-style pizza. £16.50

Crescendo is also 100% Sangiovese, but this wine is given 15 months of maturation in new and used French oak barriques. Consequently, this is a much more complex expression with considerable ageing potential. Older vines? While again, this is a big powerful red wine, this is much more elegant, with an excellent balance between acidity, fruit, and alcohol.

A deep garnet colour, again intense for Sangiovese. There’s plenty of aromatic complexity. Sour cherries are the primary red fruit, but also other nuances appear as it opens up, toast and almond notes. Bergamot puts in a welcome appearance too. Then, those aromas reprise on the palate. There’s a lot of concentration, while the tannins have polish and ripeness. The oak treatment adds complexity without being intrusive. A long fading finish too. It feels that there’s much more yet to come. Given its Volterran, I’ll also venture to describe it as nicely sculpted. It is a class act that can hold its own with many a Supertuscan, which is no mean feat.

Food is essential, so roast meats and stews are natural partners. £27.50

MonteRosola is on an exciting journey. The wines offer a sense of place, exceptionally well crafted, and competitive Italian prices. Meanwhile, Crescendo is a distinctive expression of Sangiovese that can rival many a fine Supertuscan – no mean feat.

Here is a winery to watch closely, an emerging star with great potential. It’s worthy of any wine tourist itinerary, too, once tourism gets going again post Covid-19.