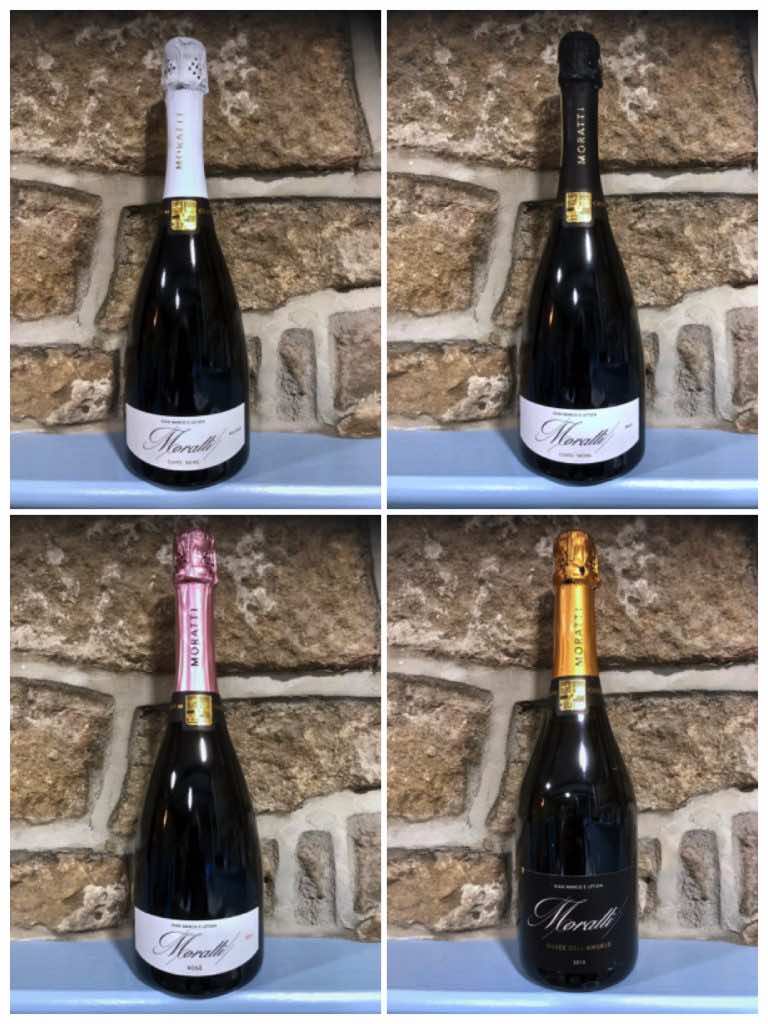 Moratti – Creating the Champagne of the South?

I recently took part in a 1-1 online wine tasting with Gian Matteo Baldi, of Castello di Cigognola. The Castello’s Metodo Classico sparkling wine project is from the Oltrepò Pavese area of Lombardy, south of Milan. We tasted four brilliant DOCG sparkling wines; all made from Pinot Noir under the Moratti brand name. These are featured below.

The Champagne of the South?

In Italy, perhaps the Oltrepò Pavese DOCG could now stake a candidacy for this title, alongside rival Italian areas such as Trentodoc and Franciacorta.  Regardless, the Pinot Noir sparkling wines of the Oltrepò Pavese are in the same league, and it’s time this was more widely recognised.

Hence this article introduces the Oltrepò Pavese and their Pinot Noir. It then features the Moratti project and their sparkling wines, complete with some food matching suggestions.

The name Oltrepò Pavese (from hereon shortened to OP for brevity) means “beyond the River Po in the Pavia region.” It’s a grape-bunch-shaped wine area in southern Lombardy, about 20 km south of Pavia and 50 km south of Milan.  The vineyards are extensive, with 13,500 hectares, in which many different white and red grape varieties grow, both native and international. These make wines in every conceivable style, and there’s always been a ready market in nearby Milan.  The vines occupy waves of rolling hills with soils rich in lime and clay. Indeed, those soils are similar in type to those found in southernmost Champagne and northern Burgundy. And while it’s warmer with more sunny days ideal for ripening grapes, the altitude, breezes and diurnal temperature variations help retain acidity and aromas. Endowed with such gifts, its not surprising that winegrowing here dates back millennia.

OP has 3,000 hectares of Pinot Noir, (aka Pinot Nero), grown for both still and sparkling wines. In this sense, it’s become the Italian homeland of this classic French variety. To put that size in context, it’s the equivalent of about a third of the Pinot Noir area of Burgundy. That also makes it the second-largest area of Pinot Noir in Europe!

The Pinot Nero arrived here from France, first planted at Conte Vistarino, which is only 10 km away from Cigognola. In 1850, Augusto Carlo Giorgi di Vistarino planted selected Pinot Noir clones from Burgundy, the first person to do so in the OP. In 1865, he became the first to make sparkling wine with it, employing the traditional method developed in Champagne. So suited were these non-native vines to the local OP terroir and to sparkling winemaking that others followed his lead – some using Metodo Classico, others later with on the Charmat/Martinotti method.

So Pinot Noir dominant fizz is long-established in these parts, and a DOC was established in 1970. However, for many years, this area, just like many other Italian regions, often sacrificed quality for quantity. Also, a good deal of the Pinot Nero was sold in bulk to sparkling winemakers elsewhere in Italy, particularly neighbouring Piemonte. The Italian wine renaissance began to change this situation, and the OP is emerging thanks to a focus on quality. Nevertheless, this area remains one of Italy’s best-kept secrets!

OP had to wait until 2007 for the Oltrepò Pavese Metodo Classico DOCG. This designation is only for sparkling wine made by the traditional method, and under the rules, Pinot Nero is the dominant grape variety. There are just 133 hectares of vines in this DOCG; carving out the best from the DOC.

There are two main categories within the DOCG. Firstly, with the “classic method”, the Pinot Nero content must be at least 70%. Secondly, the “classic method Pinot Nero” where the Pinot Nero content has a higher minimum of 85%. The Pinot Nero is either vinified white or rosé. Importantly, the use of the word “spumante” is not allowed. The intention is to direct the focus on the Metodo Classico production because the Charmat/Martinotti method’s fizz is not allowed either. Chardonnay, Pinot Grigio and Pinot Bianco can be included in these DOCG wines, but in practice, the best examples tend to be solely Pinot Nero.

As for maturation, the DOCG rules stipulate a minimum of 15 months on the lees for an NV, and 24 months for vintage-dated (Millesimato) wines. There’s also a Consorzio designation that can be used for Pinot Noir Rosé called Cruasé, where the minimum ageing is 18 months. A lower-pressure “cremant” style is only allowable as an option for Rosé.** 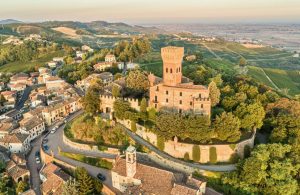 Castello di Cigognola is a medieval castle and wine estate. Bought in 1982 by Gian Marco and Letizia Moratti and subsequently restored by them, their son Gabriele Moratti is now in charge of the winery. Alongside him is the winery CEO, Gian Matteo Baldi, whose impressive wine CV includes stints at famous Italian wineries such as Bertani, Feudi San Gregorio, and  Sella e Mosca.

The Moratti family has industrialist roots thanks to Angelo Moratti, who soccer fans may know of, as he was once the Inter Milan owner. Letizia is a former Mayor of Milan, and her side of the family had previously owned the Castello.

Winegrowing at the Castello dates back at least to the fourteenth century. Today, the estate has 30 hectares of organically farmed vines, at an altitude of 300-350 metres. 15 hectares are Pinot Nero, now making the DOCG sparkling wines. All the sparkling wine is branded as Moratti, while the still wine retains the Castello di Cigognola name. The intention is for each side to have a separate identity.

Sustainability is the watchword here. Organic viticulture and sustainable production – but also employing ethical business practice. For example, they are proud to empower the wine team to develop their energy, talents, and experiences. Metodo Classico has so many extra winemaking steps that such a philosophy encourages precision and continuous improvement.

How then is this reflected in the wines themselves?

Given this is Pinot Nero DOCG territory, Moratti could use their Chardonnay and Pinot Bianco for the sparkling wines, but prefer to use only Pinot Nero. The Pinot Nero grown here reflects its terroir, just like it does in Champagne, (for example in the Grand Cru vineyards of a village such as Ambonnay). Hence all the sparkling wines are Pinot Nero, Blanc de Noirs. The base wines only use the free-run/first press juice, with spontaneous fermentation with natural yeasts. Some of the resultant base wines undergo the softening malolactic fermentation; others don’t. Some base wines are fermented in wood, others not. The result is a palette of 20-30 base wines that can then be chosen for blending before the bottling and second fermentation.

The House style is Pas Dosé, (aka Brut Nature, aka Brut Zero). This style suits the ripeness of the grapes in this warmer “southern” climate perfectly. Here the issue is more about preserving acidity in the grapes which have plenty of natural sugar, rather than a requirement for a balancing sugar dose at disgorgement. It’s a naturally occurring advantage and can be consistently successful here compared to Champagne’s more temperamental climate. And though I forgot to ask about the use of sulphur (my bad), these bone dry wines need less of that as well. 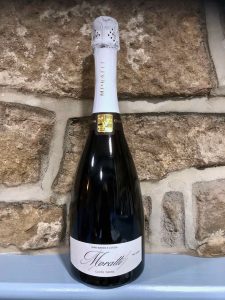 ‘More is simply a shortening of the word Amore, which surely needs no translation. Meantime, though marked as an NV, the fruit is all from the 2016 vintage. Disgorgement was in February 2020, so there are 18-24 months on the lees, depending on disgorgement date. With no dosage, the wine is bone dry, with the only 2g/l of sugar. As is typical with Pinot Noir, there’s structure here and real elegance and finesse and a naturally achieved precision balance, with a fresh stony-mineral streak. Leesy notes express themselves as crusty bread, accompanying hints of red fruit and citrus. 3,261 bottles made. Update: this wine has just been awarded Gambero Rosso Tre Bicchieri status in their 2021 guide. 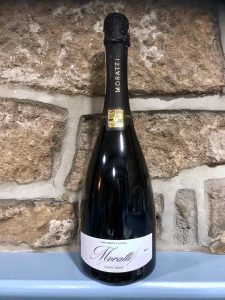 The Brut NV uses substantially the same base wine selection as the Pas Dosé above. However, the most significant difference is that there is a small sugar dosage at disgorgement (which was made in February 2020). That dosage is 4 g/l, which brings it up to a Brut-level 6 g/l, using top-up wine from 2010. The result is a bigger, broader and more powerful wine, with a fine mousse that is clean and crisp, featuring citrus, biscuit and a hint of stoniness. Still nicely dry and balanced. 3,207 bottles made. 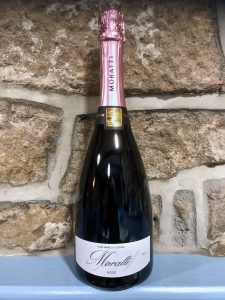 For the Rosé, the “saignee” method bleeds the pink juice from the 100% Pinot Noir after a short period of skin contact. Being Brut Nature, (again Pas Dosé), there is no additional dosage, just the original residual sugar for balance, at 6g/l. It had 60 months on the lees before disgorgement in February 2020. So in addition to a delightful copper colour and expected strawberry/cranberry aromas and flavours, there’s a good deal of secondary development and lees-influenced style. There is no oxidation, something that can spoil a rosé sparkling wine with extensive bottle maturation. In contrast, this wine has retained its freshness, but with added biscuit notes and earthy complexity. The dosage nicely offsets the merest hint of tannin. 2,938 bottles made.

Food – there’s no better match than charcuterie/salumi, though a festive Turkey or left-over cold cuts is pretty special too. 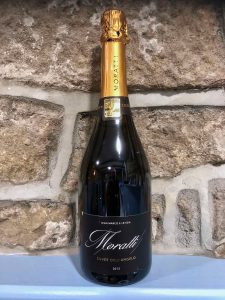 The flagship wine is rightly a cuvée of the angels, but it’s also a homage to Angelo Moratti. It’s an impressive selection of only the best Pinot Noir base wines, made again as a Pas Dosé. The wine is vintage-dated, from 2013, that has been subject to 72 months on the lees. Some included base wines were wood-fermented. That has rounded out the wine, with a creamier texture.

Unsurprisingly, this wine has a deeper golden colour and far more complexity from extended time on the lees. There are spices here too and a distinctive “vintage” character; almonds, walnuts, dried fruits, and a savoury edge. Taken together, it’s what the Champenoise might call “goût anglais”.

Food: such is the depth, subtlety and complexity of flavour that this is a wine for main courses, and meats as well as fish. Try game birds (pheasant, duck, quail), and even goose. Thin slices of duck breast make a terrific match. Similarly, Beef Carpaccio is delightful. Meanwhile, to serve this wine at its best, don’t over-chill.

So is OP DOCG Pinot Nero the “Champagne of the South?” Italy has established a wealth of world-class Metodo Classico sparkling wines. These are, of course, different from Champagne but the best are rivals in quality and pleasure. The Moratti wines’ evidence shows that the Oltrepò Pavese has joined Trentodoc and Franciacorta in Italy in this respect.

*Champagne only comes from Champagne, so using the word Champagne here is informal.

** Thanks to the Consorzio Tutela Vini Oltrepò Pavese for information about the DOCG.

For more about Metodo Classico (traditional method) and other ways of making sparkling wines, see here.