Mulled wine: Spice Yourself Up for Christmas 2020

Mulled Wine. It’s such a Christmas tradition, just like cards, trees and gift-giving. It’s a warming drink with a long history that’s made a welcome comeback in modern times. Sometimes known as spiced wine, it’s always served hot, whether indoors and outside, for example at the European Christmas markets that have become popular in the UK.  The pandemic may prevent such events this year, so wrap up warm and make your own mulled wine!

Mulled wine was popularised by the Romans, though the origins probably go back further, to ancient Greece. That’s one reason why mulled wine is still sometimes called Ypocras, or Hippocras, after the Greek father of medicine, Hippocrates.

Indeed, mulled wine goes by many names and variants. These include Glühwein in German-speaking countries, Gløgg in Norway and Denmark, Glögg in Sweden and Iceland, and Glögl in Finnish. In northern Italy, it’s called Vin Brulé, and in France, Vin Chaud. The Spanish Vino Caliente was the forerunner of Sangria.

All of these conjure images of thick woollen jumpers, cosy log fires and snow. Then add Reindeer or Dickensian characters, according to taste.

In Britain, a medieval cookery book called the Forme of Curye dating from 1390 gives a recipe for mulled wine. There were similar writings in France and Spain around the same time. For centuries mulled-wine was very popular all-year-round, as people believed that it had medicinal and aphrodisiac properties. Mulled wine is excellent, either as a party icebreaker or just for two in front of a log fire.

Now you could buy a supermarket pre-mix concoction that looks pretty much like a tea-bag. Or even buy a ready-made bottle. While convenient, most are pretty ordinary and expensive compared to what you can easily make yourself.

So with that in mind, here’s a recipe to get you into the Yuletide spirit. It also has the advantage of using up any dull bottles of wine or leftovers you may have.

There are non-alcoholic versions if you prefer, but you won’t get that essential pink-cheeked glow. 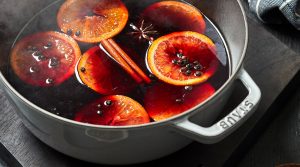 Your Mulled Wine may look a bit like this.

Virtually any red wine* will do. Don’t waste money; use something that has fruit and alcohol – it needn’t have any other redeeming features.

Pour the entire bottle (750ml) of wine into a large saucepan or jam pan. Use a gradual heat and get it to around blood temperature (37°C) before adding the ingredients.

Don’t boil the wine because that will spoil the flavour and also drive the alcohol off. While that’s heating, stir it occasionally and prepare the spices and fruit listed below.

Don’t worry about exact measures, and feel free to experiment. As a minimum, the Cinnamon and Cloves are essential.

Once the wine is warm, add the spices and fruit, then throw in 100ml of cheap Sherry, Madeira or Port, whatever you have to hand. Alternatively, you can use 50ml of Brandy or Grand Marnier instead, or up it to 100ml if you prefer more of an explosive depth-charge effect.

Now the mulling part: keep the mix below boiling, over low heat for around ten minutes.

Finally, sweeten it. Blend in two tablespoons of honey, or slowly add a little sugar to taste. Let it stand for five minutes, and it’s ready to serve.

The resultant mulled wine will be around 15-18% abv. Watch the strength as it can be deceptive. If you fall over, no-one will believe you for blaming it on the icy conditions.

Serving: strain the coarse ingredients from the mulled wine and serve  –  a large cafetière is ideal for straining. Then, use heat-resistant glass mugs with a handle if you have them, and optionally add a Cinnamon stick to each glass for decoration.

I do like my Mulled Wine with a ginger biscuit on the side. Now, where are my Slade records?

*You can also make a white mulled wine in the just same way. If so, use Madiera or Vodka to fortify it; otherwise, it might look a bit of a sludgy colour. Mind you, if it’s outside in the dark, who’ll notice?

There are more Festive drinks here.