Nascetta is a once-obscure white grape variety from Novello, a tiny hill-top village in Barolo. Once nearly extinct, Novello wineries rediscovered it and revealed its potential for exciting white wines. Now, in this prestigious area famous for red wine, Nascetta is garnering a reputation as “the White Barolo”. That’s some turnaround!

There are several spellings of this grape’s name, including Nascetta, Nas-cëtta and Anas-cëtta. However, Nascetta is the spelling used by the official Italian registry of grape varieties.  Meanwhile, Nas-cëtta is the local dialect spelling, and this usage tends to refer to the wine rather than the grape, which is “Langhe Nas-cëtta del Comune di Novello DOC.”

Nascetta and Nas-cëtta sound the same, but the unfamiliar name of the wine is a bit of a mouthful –  if you’ll pardon the pun. However, don’t let that deter you from trying it, as this wine deserves a broader audience! This article is in two parts.

Part 1 of this article is about the rediscovery of the Nascetta grape variety in Novello.

Part 2 demonstrates how the Nas-cëtta wines are flourishing. 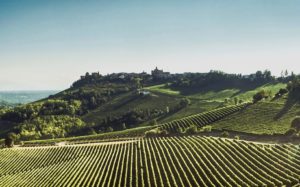 Despite Novello being one of the famous Barolo Cru villages, Nascetta has now become its symbol. But this has only taken place during the last decade.

Documents from 1877, 1879 and 1883 describe Nascetta’s long existence in Novello. At this time, it made excellent aromatic sweet white wines. They were said to be unlike any other in Piemonte and could rival wines from Sauternes and the Rhineland.

Yet despite this, Nascetta gradually became abandoned. There were several reasons for this.

Nascetta’s thin grape skins and late-ripening made it prone to fungal diseases, while low and irregular yields required especially laborious work. Phylloxera and two world wars also dealt it hammer blows. And, while Nebbiolo isn’t exactly a cinch to grow either, that grape could fetch far higher prices. After all, Barolo is one of the world’s most prestigious red wines.

And so Nascetta became forgotten. By the 1990s, only a few vine rows survived in Novello, primarily kept for sentimental reasons. The oldest of these, from 1948, were remnants in two vineyards associated with the Elvio Cogno and Le Strette wineries. Those would become the earliest pioneers in the rediscovery and renaissance of Nascetta.

To this day, Nascetta’s relationship with other grape varieties remains mysterious. It’s thought to be a standalone member of the Piemontese grape family. Unfortunately, that doesn’t give many clues about the best wine-growing practices, so these had to be defined. Furthermore, Nascetta wasn’t in the official Italian grape registry at this point. Hence there were no rules or deep knowledge to call on. Officially, Nascetta didn’t even exist!

In 1991, studies commenced into how best to cultivate and vinify Nascetta.

Indeed, gradually gaining official recognition for Nascetta as a standalone grape variety has required great dedication from the Novello producers. Though presented with many challenges, it was love at first taste for those involved. In 1994 Elio Cogno made 800 bottles from those remnant vines found across Novello. Le Strette soon followed. They soon inspired other Novello wineries to join in.

Nascetta finally obtained official registration in 2001. Then the next hurdle was to get Nascetta authorised for use within the Langhe Bianco DOC. That came in 2002, encouraging new plantings. Even today, the Elvio Cogno winery has the only authorisation to propagate new vine material.

Finally, in 2010, the Nascetta from Novello achieved a higher status. It became a Langhe DOC subzone, complete with specific production rules.

The maximum grape yields allowed in Novello are lower than for the “generic” Langhe Nascetta. Also, the Novello vineyards must be between 200-500 metres, with new plantings only from 250-500 metres.  Most importantly, the Novello wines must always be 100% Nascetta. Other wines from outside Novello can have up to 15% of different white varieties, such as Chardonnay and Sauvignon Blanc. While this blending may create good wine, Novello’s Nas-cëtta is always a pure varietal wine.

In short, it all means that Novello wines have a typicity and protected identity. Moreover, this is superior to those from elsewhere in the Langhe DOC. Hence this is why the labels proudly state, “Langhe Nas-cëtta del Comune di Novello DOC”.

The producers set up an association in 2014 to promote the wine and the territory, with seven founder members. Now there are twelve, and so most of Novello’s Nas-cëtta producers. Together they make around 88,000 bottles each year.

In turn, this has brought the grape wider success. By 2019 there were 40 hectares of Nascetta growing in the Langhe, with around one-third of this in Novello. Those Novello wines are the best examples, and you can also buy some of them in the UK!

Modern precision viticulture and detailed studies now mean that Nascetta can perform well. The resultant wine is yellow with some greenish glints; it can show aromas and flavours reminiscent of Riesling, Vermentino and Sauvignon.

A hallmark of the young wines is delicious freshness. There’s an attractive savoury quality, herbal notes and a particularly saline “bite”. Unlike many other Italian white wines, Nas-cëtta ages well over a decade or more, gradually developing honey and vanilla complexity. It means that these wines can be enjoyed young or aged further, according to preference.

Most Nascetta wines are dry*. Optional skin contact provides an opportunity to extract more aroma and bring a little tannic structure for ageing. A project has also identified the optimal strain of natural yeast with which to ferment the grapes. Mainly, fermentation uses stainless steel. There is usually no secondary, malolactic fermentation. Hence fresh acidity is preserved. Subsequent maturation requires a minimum of five months. Producers avoid oak flavours to best show varietal character, though fermentation and maturation can feature inert wood.

Nascetta also expresses “terroir”, conveying a sense of place in the wine according to the vineyard conditions. That ability is just like that of Nebbiolo. Perhaps then, Nas-cëtta can genuinely claim to be the White Barolo.

Would you please go to Part 2  to find out about the producers and their wines? It features twelve examples of Nas-cëtta wines from Novello with an interactive map. These demonstrate that Nas-cētta is one of the great wines of the Langhe!

*Sweet wines from dried Nascetta grapes using the passito process are possible. So is Spumante sparkling wine, with small quantities of Metodo Classico. However, those are rare styles not yet encountered.